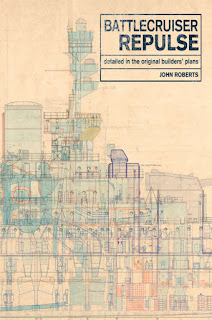 This is the second one of these Seaforth 'original plans' books I've got, the first being on the German WWI-era battleship Helgoland. Like that, this is astonishingly detailed. Many stunning diagrams are beautifully reproduced, including several four page spreads. Some of the latter are, I believe, scaled down from original draughts as much as 12 feet in length!

I'm not an expert on matters maritime. Books like this are therefore, for me, both splendid, feeding a growing interest in naval warfare, and somewhat bewildering or overwhelming, in the degree of detail. This book is slightly easier to digest than the Helgoland one simply because the original draught sources are in English, not German. 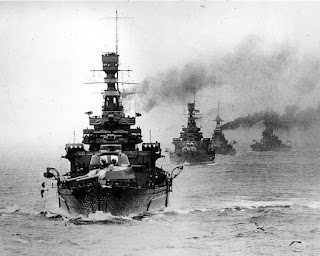 Two sets of draughts detail how Repulse was fitted out at two points in her life, the first in 1916 (with later amendments taking her up to 1921), and the second in 1936. A Renown class vessel, built according to the visions of Admiral Lord Fisher, she was intended to be fast and heavily armed. This was accomplished, however, at cost of overly light armour. Indeed, the draughts are very largely a record of the continual up-armouring of this WWI-vintage ship.

As with the Helgoland book, this is mainly a technical description, both textually and visually, with the emphasis on the latter, via the diagrams. There's plenty about the historical context as well, especially re the naval philosophies that lead to the Repulse being designed and built as she was. But, again as with Helgoland, there's less about her actual service; it'd certainly have been nice to have had a few images of her in action. 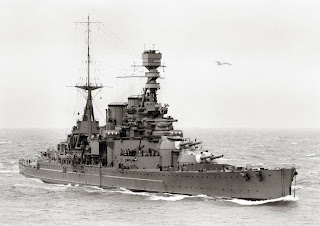 Whereas Helgoland was scrapped after WWI, Repulse was subjected to the renovations covered herein. She even took part in the famous pursuit that lead to the eventual loss of the Bismarck. But, due to that infamous lack of armour, and despite all the upgrades, she was sunk in '41 by the Japanese. This book shows her in incredible detail, and is a real gem reference wise. Definitely recommended.

* Neither of these images appear in the book; it's all just 'Admiralty draughts', i.e. diagrams.
Posted by Seb Palmer at 01:08