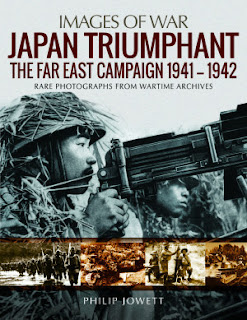 I was a little surprised and somewhat disappointed that this was such a broad account, as the title lead me to expect a more Japanese focus.

But having now gone through the entire book that looks as much a virtue as a failing; stuff is included here that's often passed over more or less completely, such as the Dutch involvement in this theatre. Still, the eye-catching title and cover image are rather misleading, in my view. And the subtitle, The Far East Campaign 1941-1942 actually better conveys the content.

The whole Pacific theatre, whether it be the US island-hopping to Japan, or the more mixed Allied fighting in the Asian archipelago, is one I'm less au fait with than the NW European or Ostfront theatres. This is a very solid account by Jowett, amply illustrated, as befits the Images of War series. I felt I learned a lot. A very useful resource.
Posted by Seb Palmer at 02:22