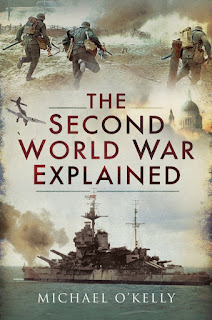 Over 180 or so pages and 20 chapters* (plus a 24 page section of black and white photos) ex-RN man Michael Kelly aims, as he says in his preface, to give younger readers with little knowledge of this information a succinct but comprehensive synopsis of WWII, which he describes as 'probably the most terrible event in the history of the world'.

For those of us - not his chief target audience - already obsessed with the history of WWII, and I'm one, this might not be an ideal read, for numerous reasons. Over at Amazon UK I note several other reviewers lambasting both book and author over mistakes and inaccuracies. The only one that really struck me - and it's as likely an editorial gaffe (it should've been spotted and corrected) as an authorial one - was when the long deceased French admiral Darlan's name appears where it should say Dönitz.

I think those Amazon reviews are overly harsh, to be honest, and miss the main raison d'etre the author himself gives for the book. I reckon that, in its intended role, as a brief overview of as much of WWII as possible, it succeeds remarkably well. It'd make a great resource in primary and secondary education. Granted it's not in the league of the scholarly professionals. But those books aren't necessarily going to be a 'way in' to this massive and complex subject for poorly educated youngsters.

With the Brexit debacle threatening to take us and Europe back to a more inter-war state of affairs books like this are probably needed more than ever. Perhaps not so much by us military history nuts, so much as to remind people who may otherwise forget or just be plain ignorant, of the broad brush-stroke history of the fascinating but appalling events of WWII.

I have to confess that I was rather disappointed by this book, as I'd hoped it'd look more at the 'whys' of WWII. I think the title's a bit misleading. A better one would've been A Brief History of WWII. But as an entrée to a vast and endlessly fascinating subject, and despite its author's own biases and occasional mistakes, I think this is a potentially valuable addition to WWII literature.

O'Kelly succeeds in covering all the major theatres and campaigns, albeit in very broad simplistic terms. And it's a pretty well balanced account, that could be read in a single day. For my 'general readership' Amazon UK review I scored this four out of five. Here on my more special interest blog I'm scoring it three and a half 'kreuz, which accords more with my own personal take on it.

PS - Having said all of the above, I also think it's a quite good/handy thing for even grizzled old dogs like me to have a concise single volume précis of the massive cataclysm that was WWII. Reading this helped me zoom back out momentarily from the maelstrom of minutiae that most of my WWII reading usually subjects me to. It also helped remind me of things I want to read more on, such as the Dieppe raid, Kursk and the battles for Kharkov, or Operation Dragoon.

* There are also two appendices: one on 'Meetings of the Great Power Leaders', the other a timeline.
Posted by Seb Palmer at 00:59