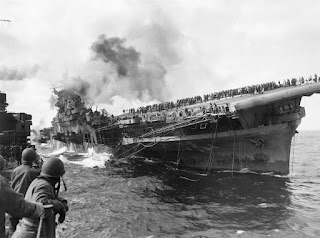 Having recently read about the battle of Midway, and the fate of USS Yorktown, an interest in American aircraft carriers of WWII was ignited in me. I bought the Tamiya 1/300 model of Yorktown CV-5, and watched Flat Top, starring Sterling Hayden. The latter wasn't about the Yorktown specifically, so much as operational life aboard this class of fascinating and gigantic maritime war machine.

Searching for more on the subject I discovered the documentary, USS Franklin, Honor Restored, narrated with the familiar Southern accent of go-to military man for Hollywood, ex-Marine Dale Dye. It tells the incredible story of the 'the ship that wouldn't die'. This is exciting enough in itself. But the drama is further compounded by the actions of its commander at the time, Captain Gehres. 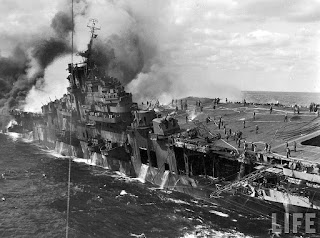 A superbly dramatic photo of the listing inferno that was USS Franklin. 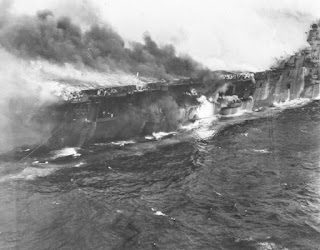 Note men visible amidst the maelstrom of fire and smoke in the hangar decks.


I won't say any more about these stories here. This review is more just a signpost intended to direct people towards watching this film, or reading about the topic. It's a fairly typical WWII documentary, style and execution wise: portentous music plays (almost too much, I found) as former crew members and military history experts are interviewed, intercut with WWII footage, some of which is of USS Franklin, and some of which is generic Pacific War footage that those interested in the theatre will often recognise from elsewhere. 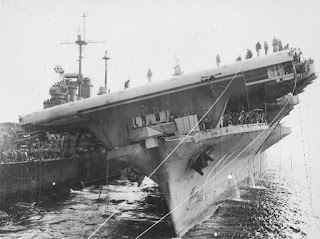 This image* conveys the scale of vessels like CV-13.

The USN eventually fielded - if that's the appropriate term; deployed, perhaps? - over 100 aircraft carriers in the Pacific theatre alone. A staggering figure! The ultimate fate of USS Franklin, given her story, is rather sad. But I won't give too much away here. Whilst Honor Restored is not an out and out classic of its type, it is nevertheless a very compelling story solidly told. Definitely worth watching.


A website devoted to the vessel and her crew is maintained here.

Dye talks about narrating the story of USS Franklin.