Some years ago I decided that I'd treat myself to certain things by Anthony Barton, from his 15/18mm Napoleonic AB range. As a kid I'd had some of his Battle Honours figures, and loved them.  Even though I'm building my major forces in smaller scales - 6mm and 10mm - I wanted some command bases, and perhaps even some display bases, of 15mm.

In part this is something I've always thought would be good. But I think I might also have been influenced by having seen such ideas manifested in reality. Doesn't Callan fight wargames with Schneider in the Callan feature film A Magnum for Schneider using Peter Gilder's armies which have larger scale commander figures?

In the end I might wind up with smaller 15mm armies anyway, as a by-product, which'd be good. But at present all I have is a rather motley selection: Napoleon and sundry staff; a load of Guard Lancers (my putative 'display' unit or units); and some non-AB oddments (one mini-battalion each of French and English Peninsular Naps by AW Miniatures). I also have a similarly ragbag assortment of 25/28mm stuff: Boney and staff (again!); a whole load of the Perry's Retreat from Russia series, and sundry random boxes of 28mm Nap plastics, mostly unassembled, never mind painted!

Having been mega-sidetracked now for several years by building 1/72 (mostly German) WWII stuff, and constant reading,  I've been determined to get back into painting minis. I'm getting there in a roundabout way. First I built and painted some Airfix 54mm Nap plastic figs, and then I started painting some 20mm WWII vehicles and figures. But, dang it, I was still avoiding the 6/10mm stuff!

I figured maybe if I finished the Boney and Staff 15mm stuff, all of which was already started, this might help edge me back towards my original goals? All of this has been very slow in happening. But today I finally got to the stage where I felt happy enough to start basing these command group figures. The painting part is, I'd guess, about 90% done. 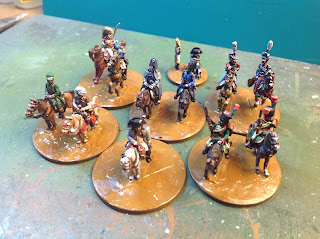 Pictured above is how they're all looking at close of play today: Milliput 'soil' on MDF bases, somewhat texturised, painted in Vallejo 'flat earth'. Tomorrow I'll detail the soil a bit with washes and dry brushing. Then I'll give the whole lot a dull-coat lacquering, before doing some final washes and highlights (on the figures/horses). Then it'll be time for final earth and grass basing, a last layer of lacquering, and they should be done.
Posted by Seb Palmer at 23:39