The real thing. Colours in this pic are a bit odd.

Teresa and I are enjoying a brief break, before I resume my teaching work. We're at this fabulously beautiful and secluded self-catering place, in Suffolk. There are black swans, peacocks, and all manner of critters wandering about outside, and although the weather could be nicer, it's still an idyllic slice of heaven on Earth. 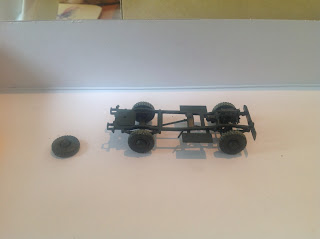 The only pic of the early stages of the build that wasn't unusably blurry. 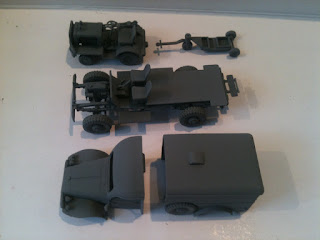 All the constituent parts constructed, and base-coated in grey primer.

We come here quite often. And once or twice I've even bought a model with me. No, not Cindy Crawford, alas. Last time it was a WWII fighter; can't recall offhand if 'twas a Spitfire or Me109? This time I brought an Academy models set, containing a Dodge WC54 ambulance, a Clarktor 6 tractor, and a munitions trailer. 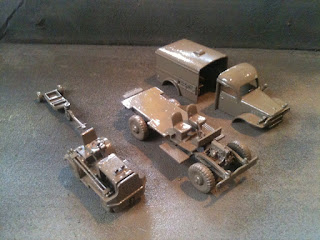 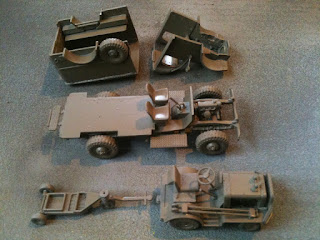 Looking darker as it dries.


I'm gradually getting better at taking a portable but useful set of paints and tools as well. Although on this occasion, as on all previous occasions, I've always found I'm missing something essential to finishing! So as per usual, this post is of an unfinished set of models. Not as per usual, however, is the rather more spartan coverage of the build itself. 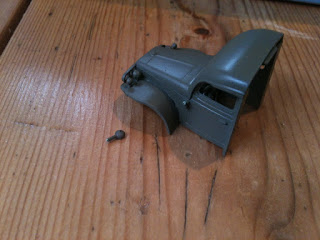 Damn! Knocked off the wing-mirror. 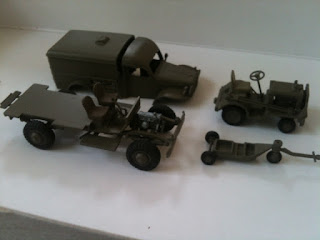 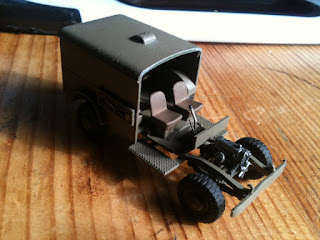 
I recall reading instructions in some kits suggesting that one should paint parts on the sprues, before assembly. I don't think I've ever actually done that. What I did do this time, which is a first as far as I can remember, is build three major components of the primary vehicle - the Dodge ambulance - and then paint them all separately, before assembling the full kit.


I've painted cockpits, or cabin interiors and the like before. But this was different. As a process, it has plus and minus points: one major positive is gaining access to areas that later on become impossible to reach; one negative is that paintwork can be damaged when gluing sub-assemblies together. 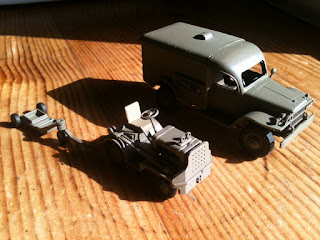 And the cab, plus tractor et al. 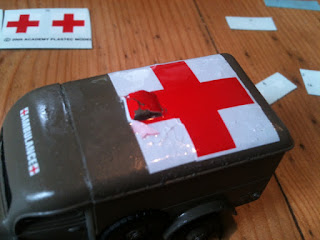 
Not having brought any varnish or PVA glue with me, decals and glass are an issue. I've decided to leave the glass. But I wanted to get the transfers on. Mostly this proved to be okay, despite putting them onto matt acrylics. I used Vallejo decal-fix solution. I've left the rear door decals, as they require the glass being in position. Sadly the two part Red Cross for the roof didn't work out, as you can see above. I'll have to airbrush that one.

And that was where I had to stop. So, what remains to be done? Well, there's fixing some stuff: the wing mirror snapped off, so I'll prob replace it with a stronger metal wire part; and the aerial view red-cross, on the roof, simply fell to bits as I tried to apply it. The rear door decals and all the glass also need doing. And there's a gloss coat, weathering, and a final matt coat as well. Plenty! 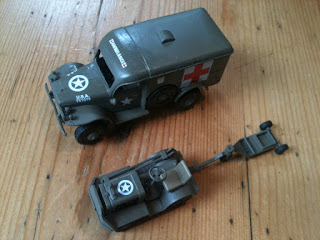 This is how they stand at present.

I really like these Academy sets, with a couple of vehicles plus oddments. This one is a break from my usual German fixation as well. Actually Teresa bought these for me, at a recent 1940s event. Bless 'er! I like the clean moulding of the parts, the level of detail - engines are included! - and the quality of fit. Plus these ancillary vehicles are just fab. And, best/most of all, they're fun and satisfying to build.