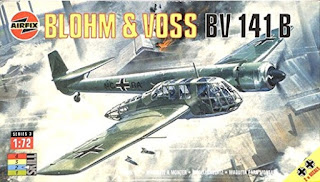 I've been holding off my 200th post for a while now, on account of never finishing anything, and having mostly posted war film reviews of late. I wanted to post something figure or model related, and - if possible - I wanted it to be something I'd actually seen through to completion.

Some time ago now - back before yule 2016-17 - and I have no idea why, but, seemingly totally out of the blue, I suddenly remembered and wanted to build the Airfix Blohm and Voss BV141. The brainwave came to me at a happy moment, just when a friend had asked what I'd like for my birthday.

So I suggested this oddity. I ended up ordering it on eBay myself, and my buddy just slipped me the cash. But that was more than fine: either way, I now have the model. Thanks Patrick. You're a pal! 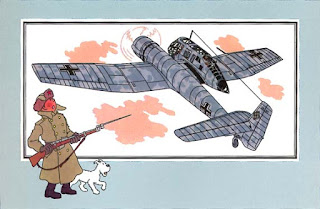 During my research into the plane itself, in an effort to perhaps find useful detail of the cockpit/nacelle interior (on account of this Airfix model being a little deficient in that quarter), I stumbled upon a thread that ultimately lead me to discover - oh the joys of the interconnected web - my childhood hero Tintin, dressed as a Russian soldier, and pictured with a BV 141. Bonkers! The above pic is in fact part of a series of postcards, all of which you can see here, produced as part of the Studio Hergé mission to educate. 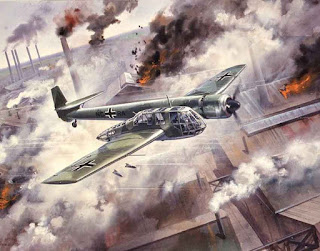 This looks like the dab hand of Roy Cross.

In the end, I wound up buying a Valiant Wings title on this 'airframe', as some aeronautical buffs call 'em. Chock full of more detail than any sane modeller ought to need, this enabled me to detail the cockpit to my own satisfaction. I added a cushioned mat for the rear gunner, ammunition cases stacked in dispensers (three of these), a seat on rails for the 'spotter', and sundry other little details. 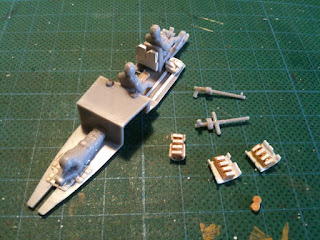 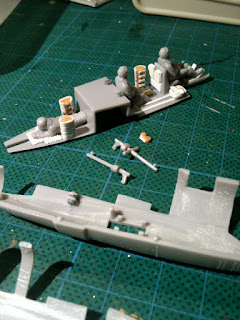 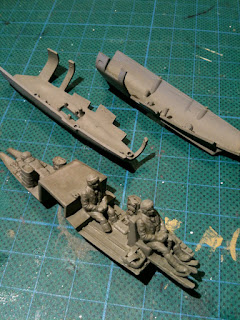 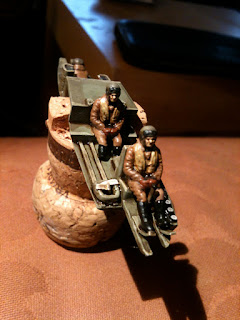 And the interior more or less done.

I was agonising over the complex greenhouse of glass, and how to mask it. Ultimately I bought an Eduard masking set from a local online model shop. I also bought some isopropyl alcohol and some Humbrol 'Clear', to clean and shine the cockpit 'glass'. Once this was done, I glued it all in place with wood glue, applied with a cocktail stick. 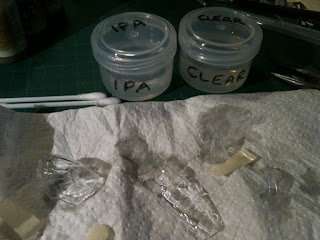 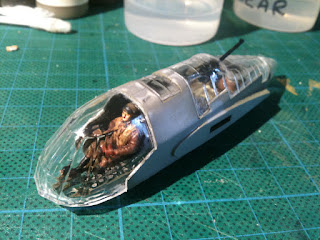 Which does look pretty transparent. Result. 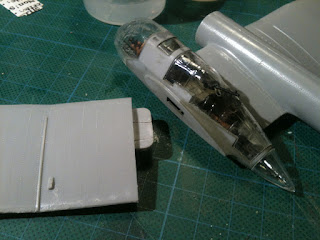 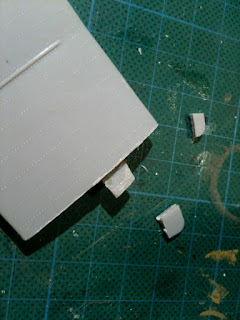 Having done this, I realised I'd made a major balls up, and glued the cockpit nacelle to the left, rather than the right of the engine and fuselage. What's more, I'd butchered the model to do so, in a right huff, thinking it was a design fault in the kit! Sheesh... what an eedjut I can be! Prising it apart and regluing has resulted in a Frankenstein's monster. 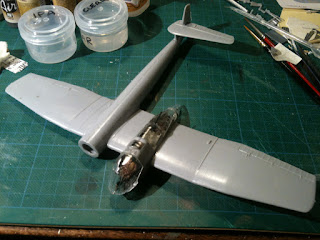 Damn... nascelles in the wrong positions... 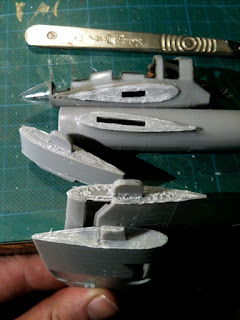 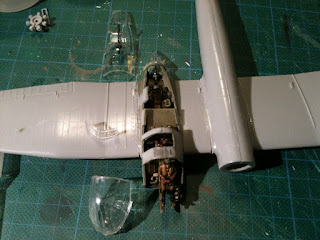 ... and re-gluing. Which knocked off all the glass.

I probably should've done a whole load of Milliput filling and filing, some rescribing, and then thought about adding some rivets where I'd worn them away. And then it would simply be a case of finishing construction and getting the paint and decals on. Hmmm!? In the end I did try to do some filling and filing, both with Milliput and some kind of liquid cement/filler stuff. The latter always seems to come out unmixed; all clear medium, and very little 'cement'.

I continued to accumulate error upon error: knocking off, misaligning and having to re-clean/treat the cockpit glass; not neatening up filler sufficiently, or adding it to all the places that needed it; not smoothing away all ejector pin marks, or mould lines; forgetting to add the tail strut (and then breaking it when I belatedly got around to putting it in place!). Hey-ho... this odd warbird has become a project I just need and want to finish, whatever the final state! 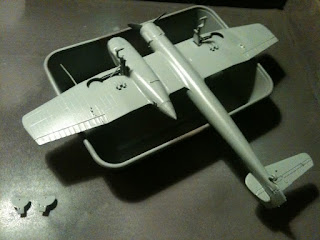 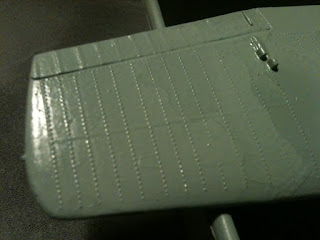 I did all this work some while back. A considerable lull then ensued, as more work on home and garden took precedence...

Finally returning to the model, in late August, I base-coated the plane in an automotive grey primer, and started airbrushing the body colours. Before I could do this I had to totally strip and clean my airbrush. Most annoying! It looks like the days of my becoming an airbrush ninja remain a long ways down the road.

As if to underline this point. Once the airbrush was cleaned and back to functioning (it still isn't quite right; I can't do fine lines with it any more... what've I done!?), whilst doing the undercarriage pale blue, some of the Vallejo paint spattered, in largish globules, at the end of one wing - see above - which I tried to blow flat with the airbrush after cleaning it out. 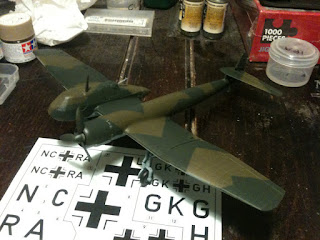 I then discovered that despite having several billion Vallejo acrylics, I didn't have the two shades of green needed for the splinter camo'. So it was off to Creative Models in Chatteris for more paints. They're great; really they're an online operation. But they don't seem to mind folk popping in and buying over their counter either. Which suits me. They're even closer than the Ely model shop.

Getting the splinter camo' onto the model felt great, except that I didn't get the razor sharp demarcations I was hoping for from the masking. Still, touched up by hand, and with the landing gear added, I feel she's looking alright. 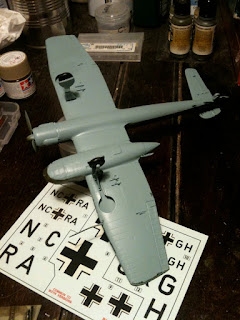 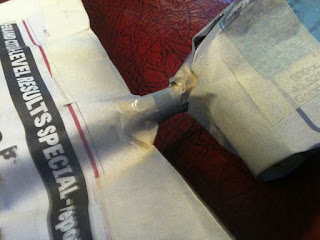 I saw an example of this aircraft online with one of those bands on the rear fuselage, in yellow. Not sure what they were called, or what they signified, I googled something apt, and learned they're called rumpfband, and that a yellow one signifies Ostfront. Well, I think they look super-cool, and I decided to add one. Yet again my airbrushing and masking skills proved to be rather 'lustlaquer'. After having to wipe off the first attempt, and spray some grey primer on, my second attempt, after some touching up, looks tolerable. 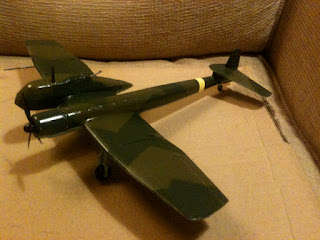 A coat of gloss varnish is applied, prior to decals.

Adding the decals proved to be quite troublesome. The Airfix transfers supplied with the kit are, frankly, pants. The balkenkreuz are the issue, as they have white areas along some of the edges where they shouldn't. And getting them to follow the contours under the wings, where they sit exactly over some protuberances was also a real headache: I tried three different types of decal fixing solution, none of which quite had the desired effect.

And then I found that some of the characters on the underside of the wings needed to be placed over the bomb release racks. I had to laboriously cut letters K and G up, so as to apply them around said bombs racks. And then I had to touch up the white bits of the balkenkreuz. And in this era of P.C. bowdlerisation, there are no swastikas for the tailplane. I found some in another aeroplane kit. Too big, but never mind. 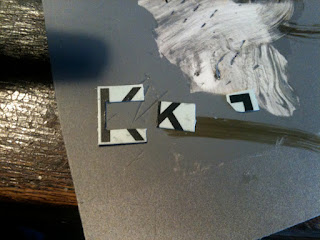 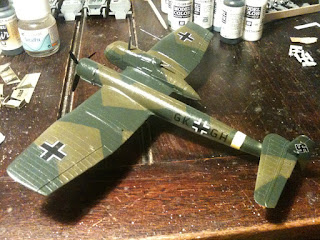 All decals are now in situ. 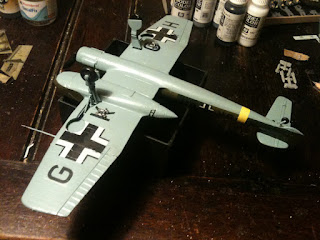 Hard work, but worth it.

There's still more to do, in terms of detailing via painting. After that I'll do a second gloss coat to seal the decals in place; then it's weathering and a final matt coat. After all of that, it'll be time to remove the masking for the canopy glazing... and then, she's done!

I've decided to post this build now anyway, despite not quite having finished yet, just so as to get a post up after so long without anything new. I've got a week away with the mrs, starting tomorrow, and when I get back, the new term starts. But I'm determined to have this finished ASAP, at which point I'll either update this post, or do a pt. II!
Posted by Seb Palmer at 22:15