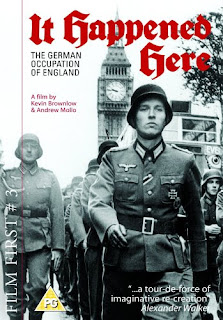 What a great film! In literature the 'alternative history' genre is quite a sizeable industry. But it would appear to be somewhat less so in film. That's a pity in my view, and particularly so in the light of a really good example of the genre, such as this is.

This film is not only interesting for what it is - the imagining of a successful German invasion of England during WWII - but also for how it came to be. I came to know of one half of the duo responsible, Kevin Brownlow and Andrew Mollo, via the former's role in the restoration of Abel Gance's film Napoleon. I have subsequently found out that Mollo went on to specialise in military history, authoring books on uniforms and equipment, and advising on many films. 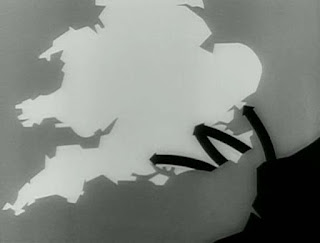 There are several film within a film moments, such as this exposition of the German invasion.

But, way back, around 1956, this indomitable duo started working on this film, whilst both were still very young; 18 and 16 respectively, if memory serves! It took them eight years to complete [1], and was made on a budget that modern films would burn through in seconds. Brownlow has also written a book about the making of the film, pictured below. I'll be reading that as soon as I can! 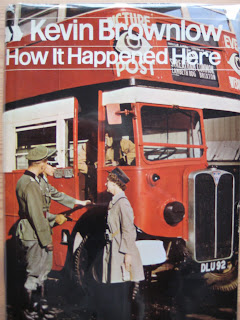 Brownlow's book about making the film.


The film itself doesn't, obviously, have the kind of production values of either a modern film, or even of a mainstream or major studio production of its own time. My biggest criticism is that the audio is at times lacking in punch. But the production as a whole doesn't suffer unduly because of such strictures. Indeed, in an era (our own) dominated by the triumph of medium over message, this is a welcome and refreshing role-reversal in that respect. Considering how it was made, It Happened Here is surprisingly professional and cohesive, which reflects very well on its makers on so many levels. 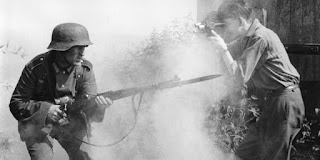 Brownlow filming. What a precocious youth!


Essentially the scenario takes as it's premise a successful invasion of England by Hitler's armed forces. Although there are numerous combat scenes, it's more about the occupation and its aftermath, rather than being a straight ahead war film, exploring how life might be in both conflict zones and pacified areas. To my eyes it's a wholly plausible and appropriately chilling depiction of what might very well have happened here, in England, had operation 'Sea Lion' actually taken place and met with success. 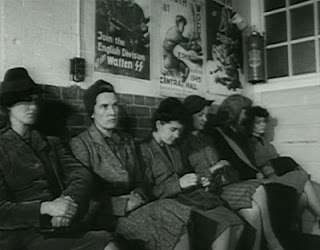 Pauline, second from left, is the character we follow throughout the film. 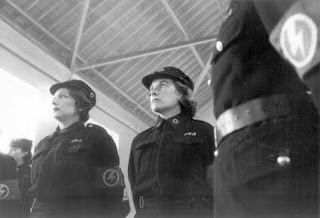 Unlike your typical war film of the postwar period, we follow a woman's fate; Pauline is the 'every(wo)man' caught up in a maelstrom of events out of her control and beyond her ken. Fairly early on in the film, after getting caught up in a British partisan attack, in which innocent bystanders are amongst the victims, Pauline's desire for order and stability lead her to join IAO, a fascist paramilitary. 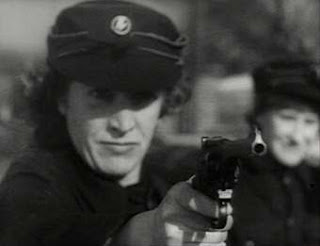 Firearm training with the IAO.

As we follow Pauline's humdrum life, it becomes clear both to her and to us, the kind of order she's helping to maintain. She meets old friends, Dr. Fletcher and his wife, and disvovers they're sheltering a wounded partisan. Not much later her friends are whisked off by sinister Gestapo types. Pauline requests nursing work, having grown to dislike the political side of her IAO role, work for which her pre-war life qualifies her. But once again she comes up against moral issues that are going to force her to question her loyalties.

I'll leave plot synopsis there, for those who haven't seen this superbly thought-provoking film. What I will add is that Brownlow and Mollo go to far greater lengths than most big-budget studio productions to create an air of authenticity, from the selection of locations, to the small contextual details (like the posters in the waiting room image above). Along with the balanced realism of the plot, and the several pseudo documentary type scenes within the film, it all adds up to a sort of cinema verite feel.

Sebastian Shaw as Dr Fletcher, a friend of Pauline's. [2]

Military buff types, of which I guess I'm one, will also appreciate the attention to detail and authenticity as evinced by the use of genuine German equipment and vehicles. Seeing a bobby cycling past a JagdPanther in the English countryside is quite something! And the cover image of stormtroopers goose-stepping through Westminster, with Big Ben et al in the background, is iconic.

When I watch an unusual movie such as this, as well as enjoying it in its own right, I'm often left wondering why there aren't more such films. And I'm now very keen to see the Brownlow and Mollo film Winstanley, which looks at 'the Diggers' movement during the English Civil War. I salute the passion and perseverance, the intelligence and creativity, of two greatly underacknowledged British filmmakers.

[1] Thereby earning the film a place in the Guinness Book of Records as the film with the longest production known.

[2] Shaw - who played the unmasked Darth Vader in Return of The Jedi - is the only famous actor I recognised in this excellent and unusual film.
Posted by Seb Palmer at 21:31