Book Review: To The Gates of Moscow - Türk/Urbanke 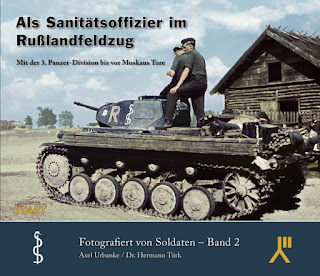 NOTE: the images in this post are from the book, and are used with the publisher's permission. They are not to be copied or reproduced elsewhere. [1]

Wow! What a fantastic book. I'm really interested in both the Napoleonic and the German invasions of Russia, and have quite a lot of books on both campaigns. This large landscape format hardback is easily one of the best on the latter. 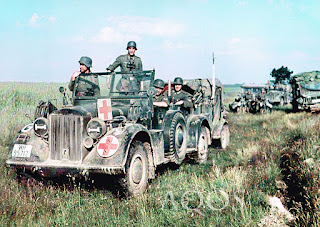 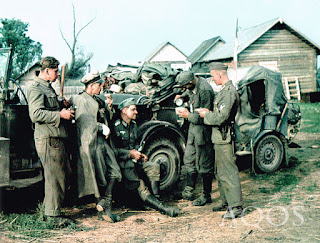 Like Napoleonic soldier and war artist/diarist Albrecht Adam, who returned from the ill-fated expedition of 1812 long before the end of that disastrous campaign, medical officer Herman Türk returned to Germany, due to a serious leg wound received outside Moscow, long before the end of the Nazi debacle in Russia. So this is necessarily a truncated account of what went on to become an appallingly epic conflict, of far longer duration than Napoleon's ill-fated campaign.

Although this is only a partial account, for reasons already mentioned, it is nonetheless an epic tome, at 468 pages. There are 444 photos, most of them taken by either Türk or one of his associates of which 244 are in colour (he had two cameras, one using black and white and the other colour film); a truly fantastic record. The text, in both German and English, is based on Herman Türk's diary entries, starting with departure from Berlin for the Barbarossa jumping off point, and then, moving near the spearhead of the attack, almost all the way to Moscow. 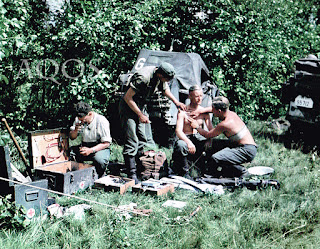 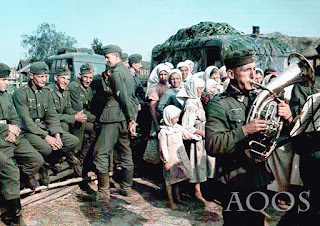 As well as Türk's diary entries and photographs, there's an accompanying text, by Axel Urbanke, which helps contextualise the day by day detail of Türk's story, and lots of colour maps. Sadly the map captions are in German only. All in all this an amazing resource for those whow, like me, have a stronger than average interest in this most cataclysmic of conflicts. The photographs, both black and white and colour, are a real treasure trove. Even though they are of varying quality, some being quite blurred, nevertheless they are - the colour pics in particular - incredibly evocative.

They also cover things one doesn't usually see in books on this subject: thanks to Herman Türk's role as a medic, we both read about and see more of death and injury than in other accounts. It might seem odd to note this, but I've often been surprised myself at how little photographic evidence there is of the sanguine aspects of what was, after all, one of the bloodiest theatres of war in the world's bloodiest conflict ever. Urbanke points out that, whilst in WWI photographers were more or less free to picture whatever's they saw, during WWII official German policy was to not document death and suffering, for fear of effects on morale. I believe this was true of the Allies as well. 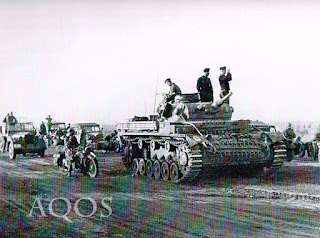 A typical Russian earthen road; what, when in military usage, Germans called a 'Rollbahn'
(10th August, '41). 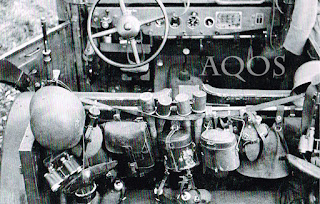 At the time of posting this I've just finished reading Türk's diary and the accompanying text. It's been intriguing to see how the darker side of the war on the Ostfront is dealt with. Right near the beginning Türk and several officer colleagues visit the Warsaw ghetto, where about 400,000 Jews were being kept in appalling conditions, prior to many of them being sent to even more terrible fates. Türk and his associates are shocked and disgusted by what they see, but there is no sign of any real sympathy/empathy, nor any deep-seated anti-Semitism.

Brief reference is occasionally made to the summary execution of the odd Russian prisoner or 'saboteur'. But the more hardcore stuff, what Alan Clark called 'the septic violence of Nazism', is notably absent, until, perhaps, they reach Tula, near the gates of Moscow. Summary executions and a policy of no quarter start to set in at this point. It's clear that Türk and his comrades in arms find this traumatic. But, as you'll often see depicted in more contemporary war films and documentaries, such normalisation of atrocities during war is not uncommon. [4] 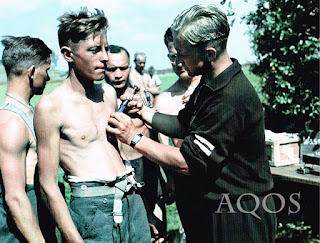 Türk at work; replacements get their cholera injections. 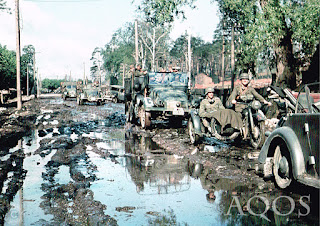 Indeed, not only Türk does not mention - until right at the end of his narrative (more on this later) - the 'not so much medieval as ... pre-Roman barbarism' (Clark), which undoubtedly occurred on a massive scale on the Ostfront, but instead he actually gives evidence that local contact was, initially at least, frequently quite friendly. This was a fairly widespread phenomenon in the early days of the campaign, and was perhaps even more so in Türk's case, due to his being in a medical unit.

In terms of the savage side of war, in general terms, what comes across most profoundly is the high level of suffering and loss within the German forces, and quite naturally so, given Türk's position as a German medic. Losses in units frequently reach near enough 100%; relatively early on in the campaign Türk's own unit, down to about 70 men, receives 500 replacements, to take the unit back to its original (albeit still understrength) numbers.

One might be surprised - I was - at how many photos in this book depict German graves. Türk doesn't only photograph these places where his fallen comrades are buried when they happen to be near at hand. He also goes out of his way to visit the graves of men he knew particularly well, and pay his respects. I wanted to include one of these grave pictures, but I was already pushing the envelope in terms of getting picture permissions with the ten pics I'm using here. 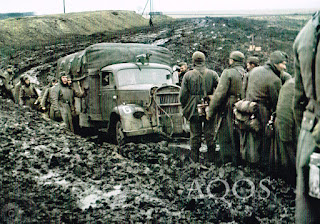 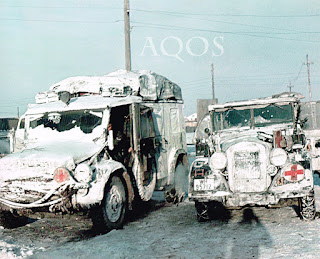 Having said all of this, as they near Moscow, towards the tail end of the book, things do get nastier;  Russian resistance stiffens, whilst concurrently the overextended German advance bogs down in the extreme Russian conditions, and due to very high rates of physical and mechanical attrition. Where before Russians were surrendering en masse, now Commissars, NKVD, and 'barrier' troops are executing 'cowards', and no quarter is given on either side in the particularly fierce fighting over Tula.

And where previously prisoners were interrogated and then sent to the rear, now the summary execution of captives starts to take over. Ironically this sort of thing frequently spirals in wartime, as much as a perceived tit for tat policy as a conscious embodiment of racist hatred. And once the spiral is initiated it tends to escalate. 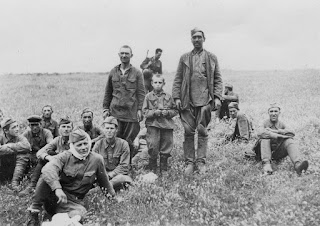 Russian POWs (this pic is not from the book).

This is a nasty business, which Türk clearly dislikes, but does not necessarily disapprove of, excusing it as reprisals for Russian execution and mutilation of prisoners,and what many German troops refer to as Russian 'gangster methods', such as pretending to surrender and then shooting your would be captors, or hiding underground and only firing from very close when german troops have passed.

Retailing for around £70, plus or minus a bit - I got my copy in Folkestone, a the Euro Military Expo model show, for a whisker over £60 - this isn't cheap. But sometimes an expensive book is worth a higher than normal price. That's true of the gigantic and incredible Taschen complete works of Michelangelo, which we bought from Amazon for about £100. And it's also true of this very different but very compelling window into one of WWIIs most brutal campaigns. 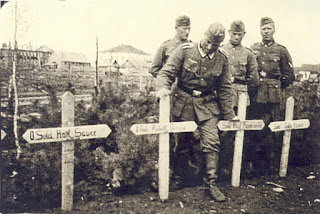 There are many grave site pics in this book (but this isn't one of them!).

[1] Normally I might've worked on them in Photoshop, to lesson the three-colour print process effects. But as I'd been asked by the publishers, Luftfahrtverlag Start, to add watermarks, I did so, and the left the pics as they appear here. They are in fact far nicer in real life!

[2] As noted in the body of my review, relations with locals weren't too bad at this point. And such seemingly innocent activities as communal musical festivities, or church services - both of which the Germans did indulge in whilst campaigning (there are pics of several church services!) - were not allowed in Stalinist Russia. Or, another way to look at it: not only did the Germans inflict their toxic racial policy on the natives of the Ostfront, they even forced their ghastly martial 'oompah' music on the hapless populace. 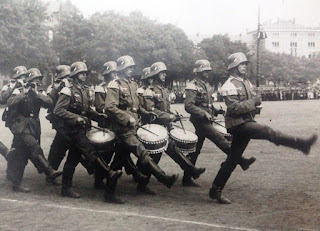 Oompah! (Not a pic from the book)

[3] The book is chock full of great pics for modellers to refer to when thinking of detailing, or dioramas.

[4] The complicity of the Wehrmacht in Nazi German racial crimes is not a topic this book explores. Nor do I, in my review of the book. Aside from the visit to the Warsaw Ghetto, and one or two references to the Commissar Order', such facets of the war in the East for lebensraum are nigh on invisible. That's not to say the Wehrmacht weren't at times and in places complicit, or that the crimes themselves didn't happen. Of course they did. And more so on the Eastern Front than anywhere else. But at the same time, I think we ought to have a balanced and open enough approach to sources such as Türk's diary, as presented here, to not tar all German's equally and all the time with the Hitler brush. It's clear from several comments in the diaries that Türk admired Hitler, and admired and trusted his military leaders. I'm currently reading Beevor's Stalingrad, in which Model is portrayed as an unpopular martinet. Maybe he went on to become one. But in the Türk diaries one gets the impression he's seen as a calm, unflappable soldier, and respected and admired by those under his command, who are often close to him. History is such a fascinatingly nuanced and complex topic!
Posted by Seb Palmer at 21:19