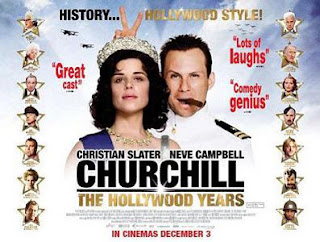 Having just posted two five star/balkenkreuz reviews, I thought it was time I posted something a bit more harshly critical, just to show I'm not someone who loves everything I see, without any critical faculties whatsoever. [1]

However, one thing I would like to say, before getting on to the meat and potatoes, is that I don't ever want to be drawn into personal attacks and mudslinging. The web is full of such stuff, and I detest such goings on. I may criticise someone's point of view, or their performance, or whatever. But by and large if someone has something out there to be criticised I admire that person for their achievement, even if what they've achieved is not to my tastes. 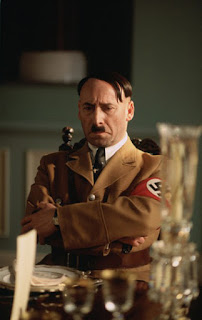 Anthony Sher as Hitler. A Jewish actor as der Führer? Hilarious! If only...

Anyway, to business: I'm extremely glad that I paid only £1 for this DVD. Even at that low price I feel robbed. I spent, or rather wasted, 84 minutes of my life watching this dreadful dross. At least it's relatively short. Thank heavens for small mercies. I should've followed my instincts: one look at the cover was enough to tell me this looked like rubbish. But I allowed the idea, suggested by the title, to fool me.

The idea of rewriting Churchill's life and achievements in a spoof Hollywood style is a basically sound one. One does get tired of seeing the Yanks rewriting history with them winning everything singlehandedly. Not only did Bon Jovi help capture the first Enigma (U-571), but they also staged the first massed daylight bombing raids (The 1,000 Plane Raid) [2]. Apparently this film is intended as a riposte to such things. I didn't notice. Perhaps in part because one of the references was to Pearl Harbour, another truly dreadful film I've seen, but wish I hadn't.

Hollywood does a far better job of sending itself up, in the 'Nam themed spoof Tropic Thunder.

The trouble is, as much as such a film needs to be made (Team America is a similar but better executed idea, as is Tropic Thunder), the execution in this instance leaves a lot - pretty much everything - to be desired. The acting is bad, the script is bad. It has the production values of a budget made-for-TV affair, when it needs to look epic, even if (hopefully) epically comic [3]. But I didn't laugh at all during this film. Truth be told, it was so bland and nothingy I couldn't even summon the energy to groan. Although there was plenty to groan about.

A portion of the British cast might be referred to as 'comedy royalty' [4]. Whilst many of them have done stuff worth seeing, in other (largely very different) contexts, the result here is decidedly less than the sum of the parts. None of the characters have any depth or dimension of any kind, other than to be facile and irritating, and consequently I couldn't have cared less about any of them. Indeed, one kind of wished that they might all be hastily dispatched, in some amusing manner [5]. No such luck.

Maxim magazine is quoted as describing this film as 'comedy genius' [6]. Comedy genius!? Dr Strangelove is comedy genius. This rubbish makes Tropic Thunder, which is merely quite funny, look like comic genius. I can remember practically nothing about it, which I regard as a small mercy. I do recall one godawful sequence, when Churchill (Christian Slater) and Denzil Eisenhower (Romany  Malco) take to the stage and perform a lame-ass rap version of The Siegfried Line. [7]

In my Amazon UK review of this I said I would give this no stars if I could. It's rubbish. The idea is excellent. Sadly the execution is woeful. And on here I do have the freedom to give it no stars/balkankreuz. Do yourselves a favour, watch Soft Beds, Hard Battles, Tropic Thunder, or better still, Doctor Strangelove, but don't waste your time (like I did!) on this tepid gutless bilge.

I haven't seen this yet, but it does look both sillier, and therefore probably funnier, Jackboots On Whitehall: 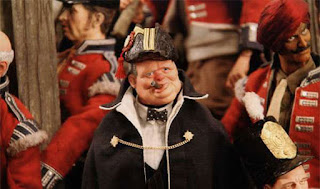 [1] Anyone who knows me personally knows that I can be a deeply critical, indeed, a downright ornery son of a gun. But that's amongst friends and family. In 'public life', even in the backwaters of small scale military blog land, one should be polite.

[2]  We should of course let them have the credit for these raids, as they were directed against civilian targets. Although in the Hollywood/American version what's bombed is a Luftwaffe factory.

[3] It was made in about twenty days, and you can tell.

[4] I'm pretty strongly anti-royalty, and agree with Thomas Paine: 'monarchy in every instance is the popery of government.' And I find it an inappropriate form of praise for anyone who's actually done anything commendable, as opposed to being born into a position of privileged eminence.

[5] Somethihg like the pills producing fatal flatulence that feature in Soft Beds, Hard Battles would've been about right.

[6] Mind you, Maxim has never been my first port of call for acutely insightful film reviews. And, to be fair, the full quote might've actually run thus: 'this film's utter crap, what they needed was some sort of comedy genius to rescue it'.

[7] You can imagine the scene in a West London pub: 'We need a prominent black character... Denzil Washington? I know, let's get someone much cheaper, and they can be Denzil Eisenhower!' As to the attempt at an asynchronous musical schtick, it's funny when Marty McFly starts shredding at the 1950s College hop. But here, like everything about the film, it just doesn't work.
Posted by Seb Palmer at 18:56