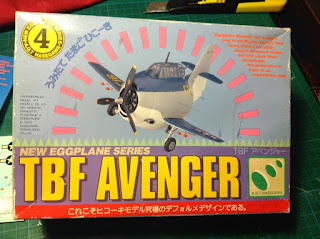 I bought a pair of these cutesy little Eggplanes donkey's years ago, at a Duxford IWM airshow. I built the first one some time back, and made a right hash of it. So I'm hoping my second attempt will be a bit better! Here goes... 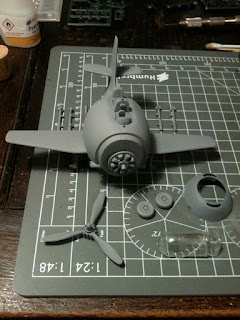 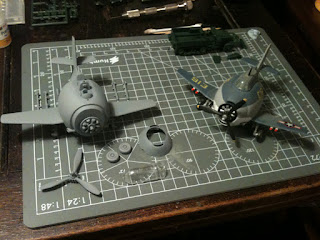 Alongside my older build of the same model.

This time around I made a bit more effort (only a litle bit, mind) to smooth out some of the seams/joins. But I'm still not much of one for filling gaps. I find the tubes of filler paste/putty too messy, and liable to make things worse rather than better. Milliput is my favoured solution for filling, but it takes ages to cure. And I'm a bit impatient most of the time! 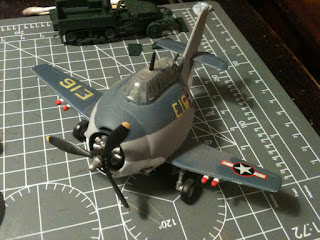 As you can see from the picture above, of my first build of this model: masking the canopy is very laborious.
But it is also quite Zen, and pretty satisfying once done. Last time around I masked both the inner and outer framework - i.e. two sets of masks, both internal and external - painting the inner surfaces green, and the outer blue.
But all that hard work was for naught, as you can't see anything inside the cockpit, thanks to a mysterious misting of the 'glass'. Damn!!!

I thought that this time I might spray the colours on and then add Humbrol Clear later... perhaps even at the end? Doing it at the start seemed pointless, given the massive amount of handling that the complex framework masking inevitably entails.

Actually, having said this... in the end, I simply (!?) masked the outer framework, and then cleaned the inner 'glass' with isopropyl alcohol, before hand painting it with Humbrol Clear.
After chatting with a buddy I also decided I could do the inner green frame painting on the outside of the 'glass' (and pretend I'd meant to do so all along!). 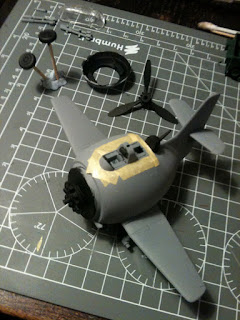 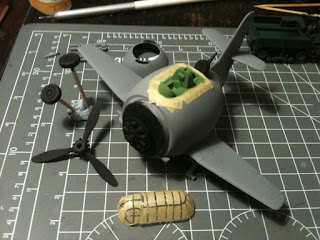 These Eggplane models are probably about 20+ years old. Some of the decals have really deteriorated. On the last model some were so fissured with a kind of craquelure that they simply dissolved when placed in warm water, prior to application. This time I not only got the instrument panel in the cockpit on, but also the little propeller transfers. Fingers crossed this time I'll get all the decals in place! 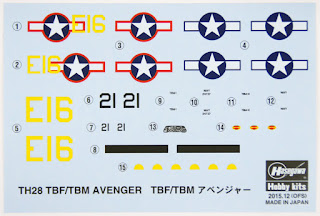 The decal sheet. In a poor state due to old age!

As with my last TBF-Eggplane build, I made seatbelt straps. Previously I used Milliput. This time I used thin plastic-card. Milliput allowed me to make the straps more flexible, and shape them better to the seats. Plastic-card resulted in bigger, bolder straps, with a much more 3-D effect. I also detailed these a little better, with metal clips on the waist/belt straps.

Hopefully I won't screw up the cockpit glass this time, and you'll actually be able to see inside! 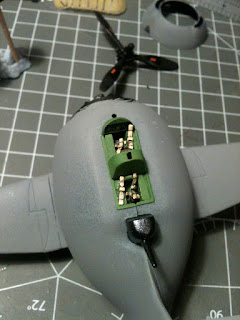 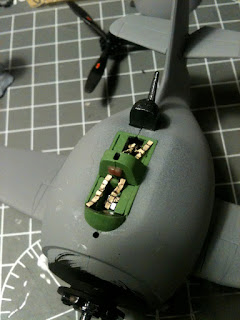 ... chunkier than my previous attempt. 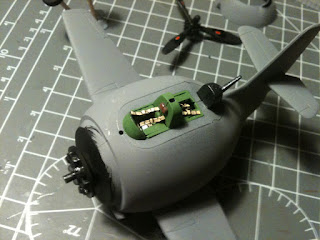 These Eggplanes are, of course, very silly. But they're great fun. I think I'll be getting more at some point. Maybe some Zeros? Or perhaps the Lockheed Lightning (at the top of the planes pictured below), in shiny silver, with the groovy twin-boom layout? I'm even tempted to go non-WWII, and do a Tomcat, or perhaps even a Space Shuttle... Hmmm??? 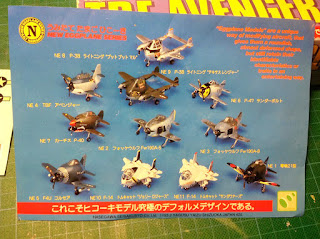 I'm guessing this was the Eggplane range at the time my models were made. 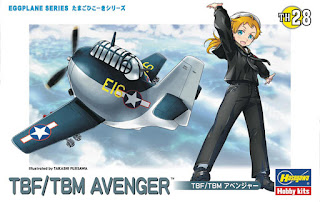 This is the more modern packaging for the same model.

After a brief hiatus, I managed to get in a few dribs and drabs of time almost every day, over the last four or five days, and have really moved the model on. Below is the masking for the white underbelly, and then the grey midriff. Note the use of blue-tac to mask areas that would later require gluing. 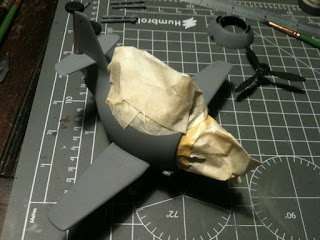 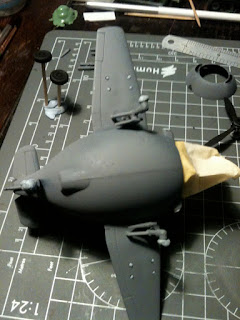 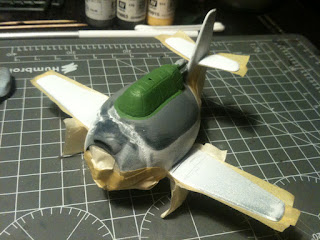 The white underbelly, and the green inner canopy, painted externally. 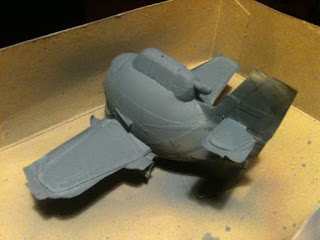 Masked and sprayed in the midriff grey.

Despite the slow down I did a little bit almost every day, even if at a snail's pace! It's probably good to take masking and spraying slowly.
Midway through spraying the grey, the aerosol ran out; the consistency of the new grey paint I had to nip out and buy, Humbrol acrylic, was - despite much vigorous shaking of the can - a lot thinner and more watery than the previous can. Annoying! 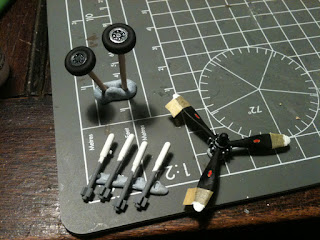 Working on detailing some of the sundry elements still to be glued in place.


It took several coats to get a decent grey coat on over the gloss white I'd sprayed prior to that. With the white underbelly and grey mid section in place, it was time to do the darker blue of the upper body/canopy, and upper wing surfaces. I did this using a standard Vallejo blue, mixed with a little water, applied with the airbrush.

Dammit! Every time I use the g'damn airbrush I have to break it down completely and clean it repeatedly, as it always seems to be clogged up, with insufficient airflow. It makes airbrushing rather onerous.
But, after much cleaning, re-asseming, breaking-down again, and re-assembling again, etc, etc... Finally, and all of a sudden... boom! Once the blue has been sprayed on, and all the masking  removed, the model looks really different, and quite near completion.
I added the few remaining bits and bobs: rockets, prop, wheels and aerial/antenna, and presto... looking pretty good! 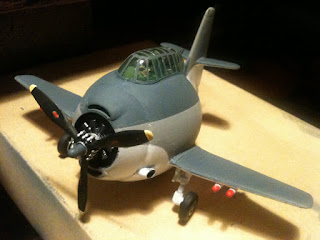 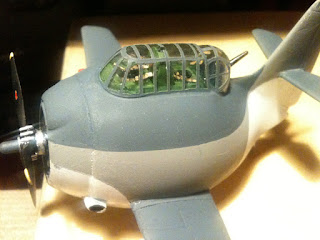 Mercifully the canopy came out much better this time around. 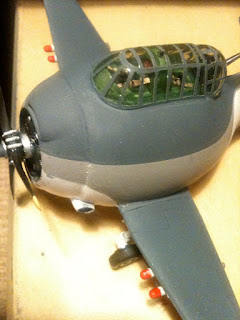 You can actually see the trouble I went to, detailing the interior.

So, all that remained were the decals, and a little bit more detailing, paint-job wise. As with my previous eggplane, some of the decals simply disintegrated. Fortunately the larger stars and bars type ones - I decided to use the blue and white only versions this time, for a little variety - held together.
The I.D. numerals, however, simply crumbled. So I was forced to make a mask, and hand paint them. I did this also for the black bars on the upper wings near where they meet the fuselage. 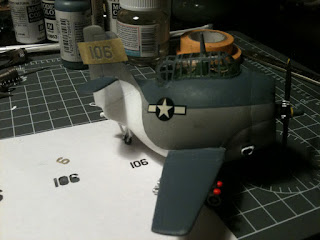 Masking I.D. numerals on the tail-fin. 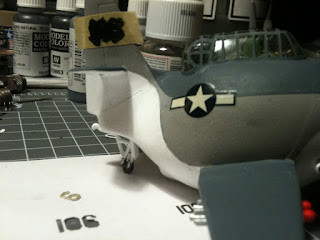 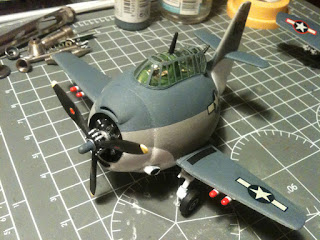 All the stars are in place, the black bars on the wings also... 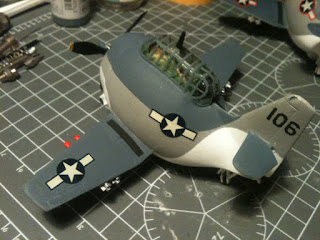 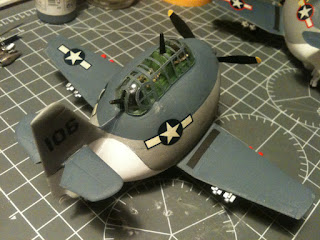 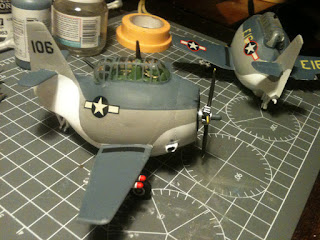 But good enough for me to get this post online! 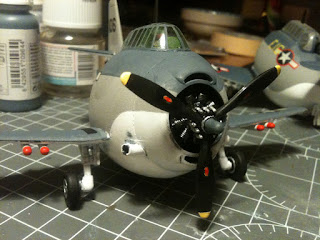 'Fast and bulbous...' as a certain Cap'n once said.