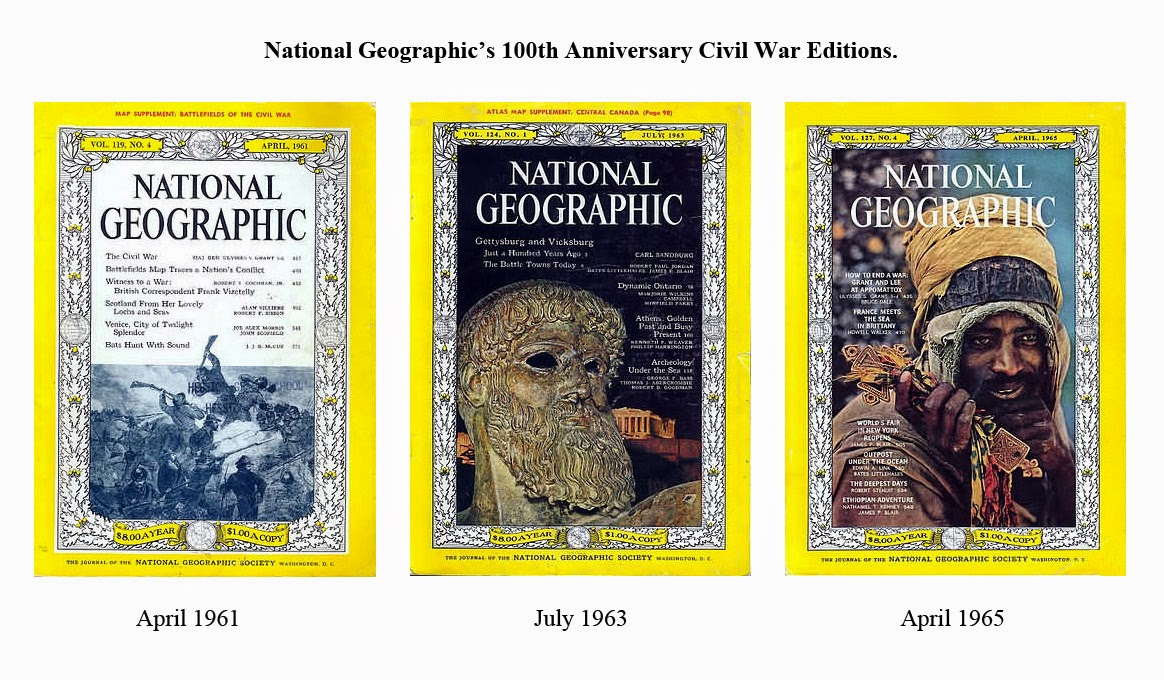 Time for something a little 'off piste', i.e. non-Napoleonic. I hope none of my readers are, er, um ... 'piste off' by this sudden divergence? Sorry about that... but I just can't help myself!

Anyone who's gone back as far as my first post for this blog will have read about how Aifix 1/72, or 20mm plastics, were my introduction to collecting toy soldiers, or 'figures', as I prefer to call them. In that post I mention a series of articles run by National Geographic magazine, on the occasion of the 100th anniversary of the ACW. 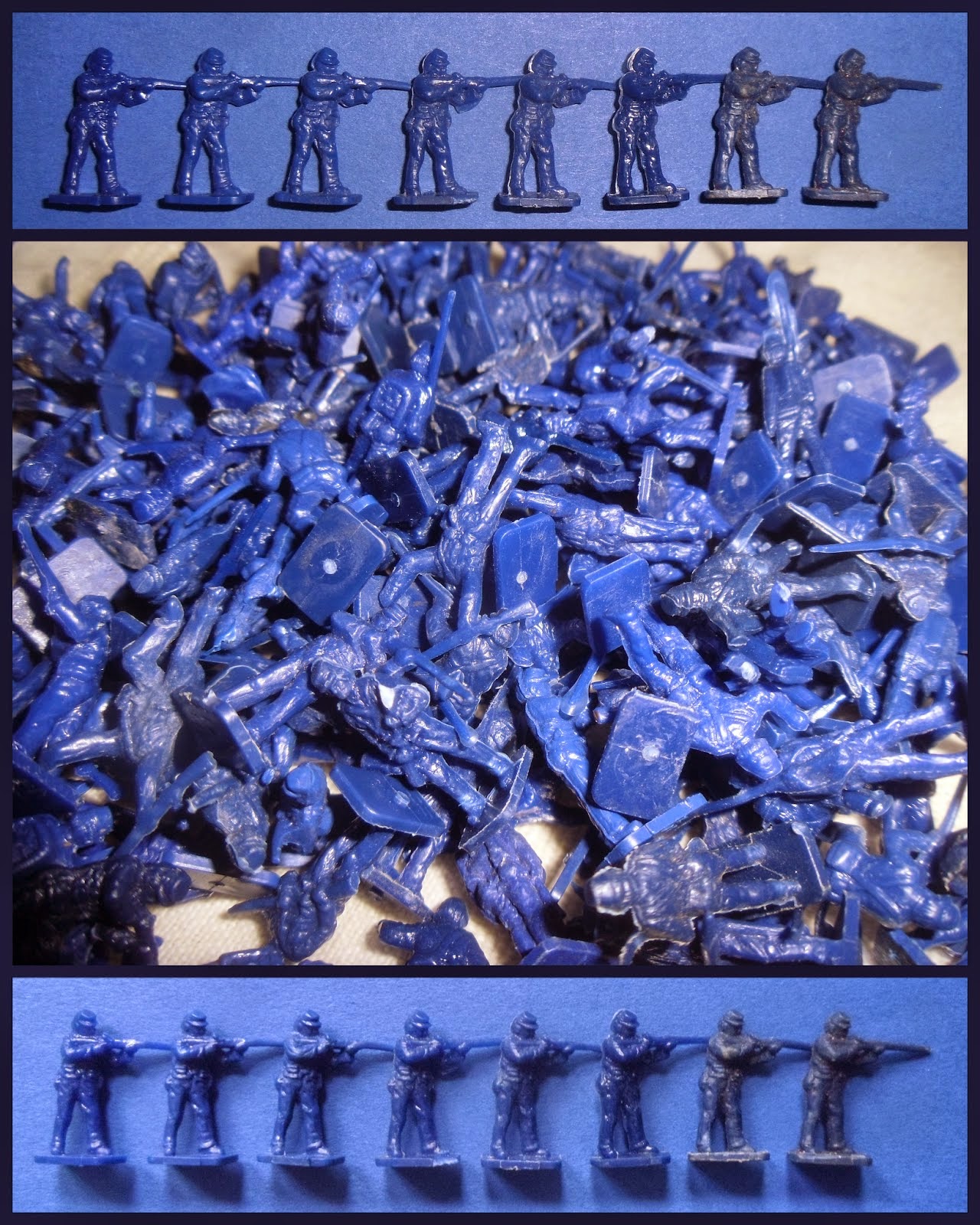 Last time I mentioned ACW Airfix figs, I showed Johnny Reb, so this time it's the Yank's turn.

Since that original post I've done a bit more online sleuthing, and, I'm pleased to say, had some success. After years of on and off searches that bore no fruit, this is something rather wonderful for me! I've been able to establish that there were at least three issues featuring ACW-themed articles in the series, appearing in the April '61, July '63, and April '65 issues of the famous periodical. I've been able to buy all three issues via Amazon UK's 'marketplace'.


What's driven this quest are the highly evocative memories of battlefield paintings by the (probably husband and wife) team of Robert and Dorothy Nicholson. The April '61 issue, the first I found on Amazon and bought, has none of their work. So I was pleased to get the magazine, but a little disappointed at this lacuna. But as it turned out somebody else's superb work made up for that (read on to find out more!).

The next I got hold of was the '65 issue, which had, joy of joys... one of their works. Okay, it's only one, but it's a start! I was utterly convinced there were significantly more such artworks, and consequently had high hopes that the '63 issue, which covers Gettysburg and Vicksburg, would have more of their work! I'd ordered this mid series issue last, and we headed off to visit Belgium and the battlefields of Waterloo before it arrived.
Upon our return I was hoping to see it on the door mat, but I had to wait a few days longer. What did I find? Where there any more of those fondly remembered (or was it imagined?) battle scenes? Well, it kind of yes, and yet kind of no. Confused? Me too! So, without further ado...
Issue by issue, the contents. 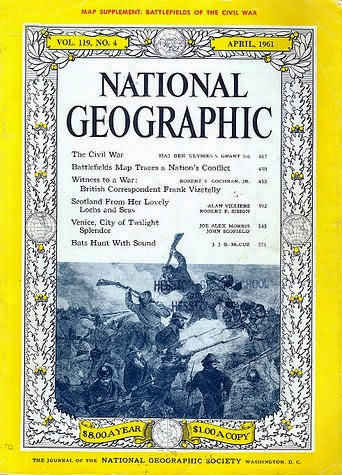 
As well as the very famous Battlefields Map, a separate foldable thing, which packs an amazing amount of information into its two sides, there are two ACW themed articles in this, the first of the NG's 100th ACW anniversary series.


The first is entitled simply 'The Civil War', and is written by none other than Maj. Gen. Ulysses S. Grant. That's U. S. Grant III, I should say, grandson of the head of the Union Army, from whom he derives his illustrious name. A second and much longer piece, 'Witness To A War', follows the civil war via the work of Englishman Frank Vizetelly [1], and is both fascinating and beautiful, the latter thanks not only to the NG's usually high standard of photographic accompaniment, but Vizetelly's own artwork, masterfully trancsribed from on the spot sketches and notes, to exquisitely beautiful woodblock prints, back home in England, for the Illustrated London News.

The Illustrated London News title, from an 1864 copy.

Gen. U. S. Grant III's piece is well-written, and, whilst he sings the praises of his famous forebear, admirably even-handed, and illustrated throughout to the usual high standards of the NG. But it's undoubtedly Frank Vizetelly's story, and the artwork derived from his field-sketches, that steals the show. So, although I was disappointed that the Nicholson's work was absent, this was more than compensated for by the Vizetelly story, with its sumptuous images.

If I get the appropriate permissions, I'll fill in more on this wonderful story when I get an opportunity. But for now, suffice it to mention, in passing, that Vizetelly's images, as transposed for print by unknown but superb craftsmen (often the wood engravings were composites of the work of several engravers), are amongst the things that add to the appeal of Amanda Foreman's superb book A World On Fire, which looks at the ACW through the lens of relations between protagonists here and in the divided U.S.

This unusual angle makes for an interesting and very different perspective on the conflict, with figures like William Seward and Lord Lyons figuring more in the telling of an oft-told story than such typical central protagonists as Lincoln and Grant, or Davis and Lee. Foreman also starts her chapters with the kind of headings and sub-headings that 19th Century writers used, and peppers the narrative with Vizetelly's works, which add much considerable and evocative charm. 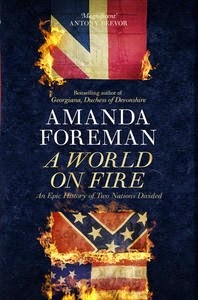 A World On Fire, by Amanda Foreman. Lengthy and highly detailed but fascinating. 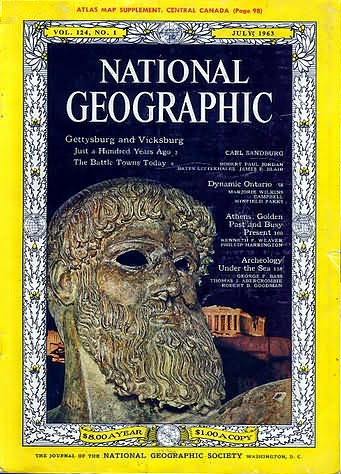 I awaited the arrival of this middle-war issue, the last to be ordered, with bated breath, thinking 'Will it contain the lion's share of the Nicholson paintings, that I recall so fondly?' They were things of beauty. At least they were as my mind recalls them! And having seen one of them again, in the '65 issue - at last, after more than twenty years of occasional looking - my anticipation grew as the days of waiting went by.

Well, upon returning from a trip to Belgium, to visit Waterloo and numerous other Belgian attractions (such as the splendid Hergé museum [2]), I was obliged to wait several more days, as the hoped for package wasn't there, amidst the pile of bills and junk mail that greeted our return. 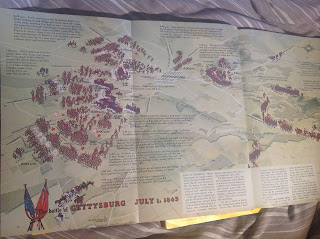 The three-page spread of  July 1, Gettysburg. 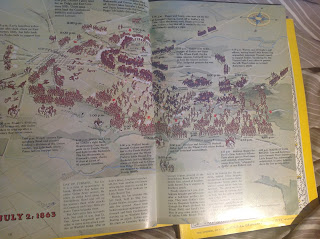 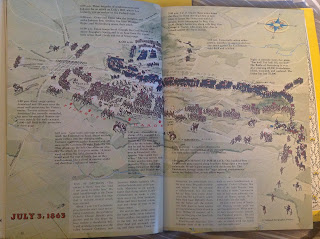 When it finally did arrive, I was able to peruse the two articles it contained, namely 'Just A Hundred Years Ago', by Carl Sandburg, and 'The Battle Towns Today', by Robert Paul Jordan, in search of the elusive battlefield paintings. As it turned out, both Robert W. Nicholson and Dorothy Nicholson did do work for the second of the aforementioned articles, Robert providing three spreads, two double and one a triple (with a fold out page) for Gettysburg, Dorothy working on numerous maps, and a similar hybrid-map/battlefield artwork on the Vicksburg campaign signed 'Dick Loomis'.

Unless there are further pieces, with accompanying artworks, that I have yet to unearth, then it would seem that my memory has made multiple hybrids based upon the Appomattox and Gettysburg spreads. The whole lot adds up to something pretty wonderful, but not quite what my memory had lead me to expect. 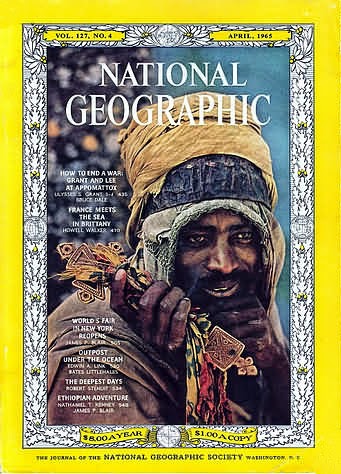 The third in the original series, this was my second acquisition, and the first in which I touched the 'holy grail', namely those long-remembered images, the battlefield painting of Mr & Mrs (I'm assuming?) Nicholson. This issue once again features U.S. Grant's grandson, this time contributing another very diplomatic piece entitle 'How To end A War: Grant And Lee At Appomattox'. Pages 460-1 feature a two-page spread by the Nicholsons, depicting the events of 9-12 April, 1865. 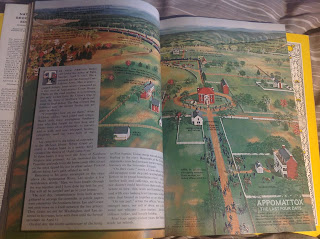 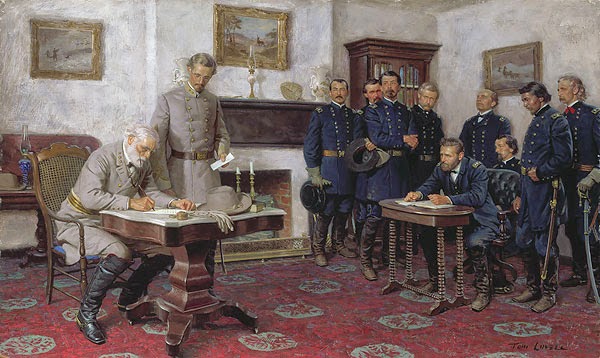 Lee signs the surrender in the McLean family parlour, as Grant and his staff look on.

As well as the Nicholson artwork, there is also the superb painting by artist and illustrator Tom Lovell, shown above, which was commissioned especially for the series, to augment this article, depicting the actual signing of the surrender at Appomattox Court House. This famous and historical moment was not, perhaps somewhat surprisingly, given how this was one of the first heavily photographed wars, captured by a camera lens.
Although photography documented this war like none before it, save perhaps the Crimean, several key moments were missed, the surrender being one, and Lincoln's speech at the dedication of the Gettysburg cemetery, possibly, another. Regarding the latter event, there is a photograph in which it is claimed Lincoln can be seen, although how certain one can be that this definitely is Lincoln remains, to me at least, a matter for debate and speculation. 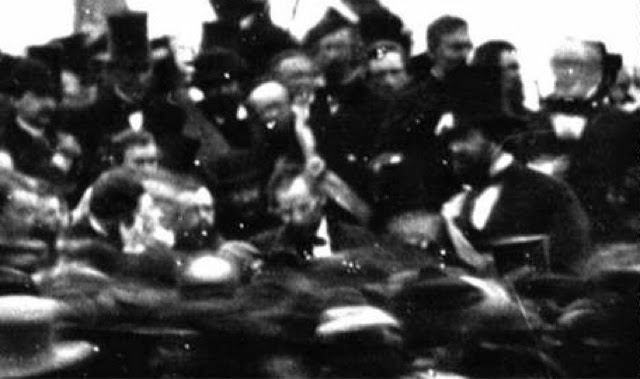 As a quick aside: the story of Wilmer McLean's relationship with the war, which I first heard about during Ken Burns superb ACW documentary epic, is amazing: McLean and his family left their Manassas home when the first Battle of Bull Run took place outside, Confederate commander Beauregard using their home as his HQ. Beauregard would later tell the following story: 'A comical effect of this artillery fight was the destruction of the dinner of myself and staff by a Federal shell that fell into the fire-place of my headquarters at the McLean House'. How funny McLean found it all, I leave to your imagination. 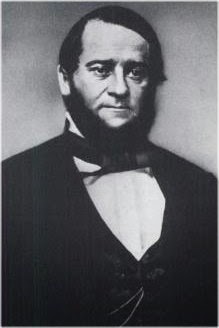 Having moved about 150 miles south west, from Manassas to Appomattox, and no doubt thinking he'd escaped the war, Wilmer must've been slightly surprised when, on 8th April, a messenger from Grant knocked on his door asking to use their home as a meeting place for the signing of the surrender.

Apparently, if not perhaps surprisingly, McLean agreed somewhat reluctantly, and on the 9th, the surrender took place in his home. In the Burns doc, McLean is quoted as having said 'The war began in my front yard and ended in my front parlor'. Whether this apocryphal or not, it makes for a great story! I read on Wikipedia that the Union officers then made off with the McLean household furniture, as souvenirs, pressing dollar bills into the homeowner's hands to salve their consciences!

All in all, the NG coverage over the five years of the centenary appears not to have been as large as one might've expected, or as I myself had remembered, but it is nevertheless very good, and occupies a very special place in my childhood memories. Lovell's painting and the battlefield panoramas of the Nicholson's have haunted me for over two decades, and collecting these magazines - binned by my parents at some point, unaware (I assume/hope!?) of my attachment to them - has been an odyssey of exploration and fulfilment that I've thoroughly enjoyed.

All this leaves me really wanting to start collecting ACW figures, but I figure (sorry!) I'd best wait till I've got a bit further with my Russia 1812 work first!


NOTES:
[1] Vizetelly doesn't sound very English does it? Frank's father was of Italian origin.
[2] Teresa and I were pleased to note National Geographic magazines displayed amongst Hergé's research resources at the museum.