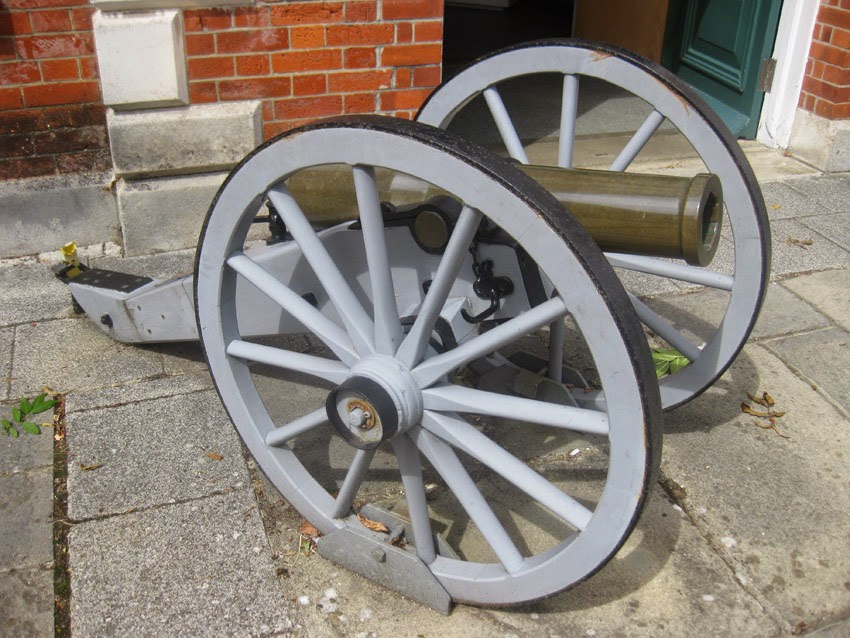 A cannon outside the museum entrance. I didn't find out what era or calibre. Anyone know?


Of course there's much more at the RGJ Museum than just the amazing Waterloo diorama. Here's a few more pics of some of their other stuff... mostly more dioramas!


First off, there's this rather fabulous depiction of a Peninsular action: The Battle of Vimiera, Portugal, 21st August, 1808. The Frenchies, under Kellerman, are dressed in a more or less completely white uniform, a look I'm not very familiar with, not being much of a Peninsular campaign buff. I was aware that the armies of early Revolutionary France were often dressed mostly in white, but I didn't know such a practice persisted or recurred eslewhere.

The top pic show most of the diorama, with the French funnelled down the valley, with Vimiera, in the background, held by the British, their main force out of view in reserve behind the town. On either flank are elements of the 95th Rifles (of Sharpe fame!), the 2nd batt. on the left, along with some artillery, and the 1st batt. on the right 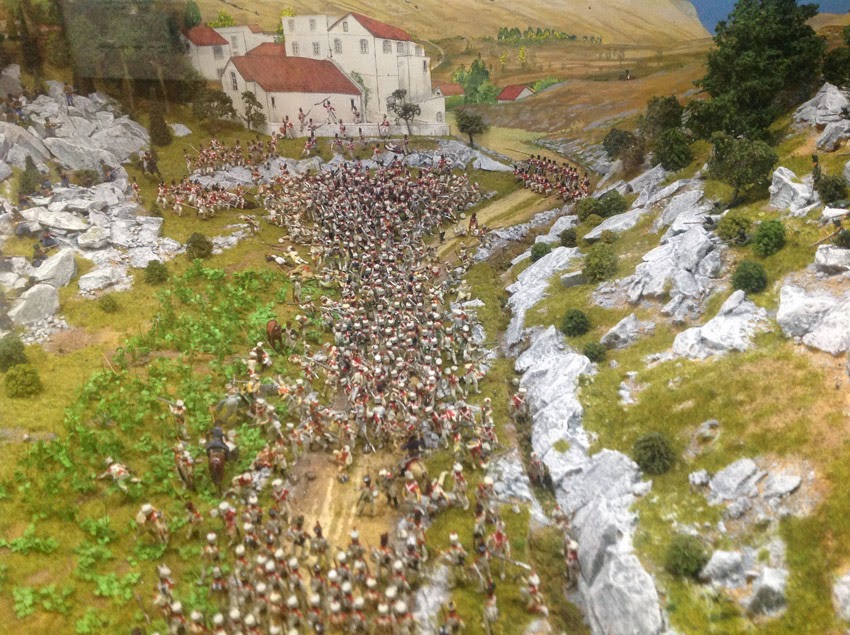 The massed French columns look great! But they're starting to lose their shape under the British fire. 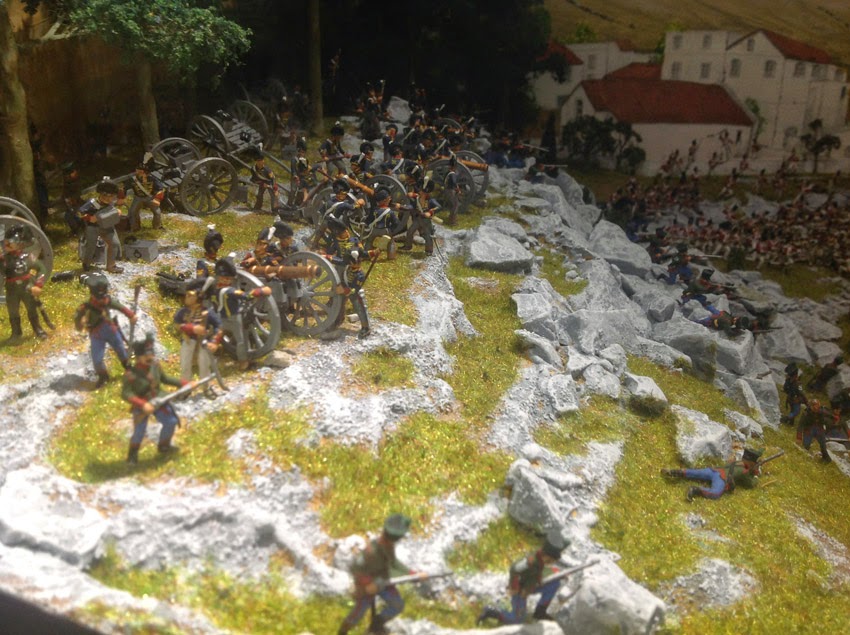 The artillery atop the left hand heights. 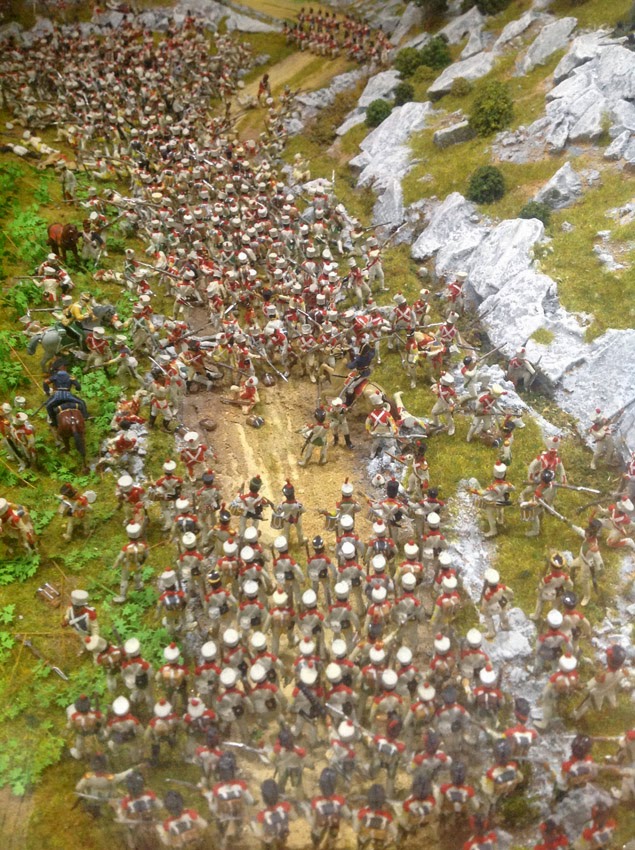 A close-up of the French columns... lovely! Really gives a flavour of the 'big battalions'. 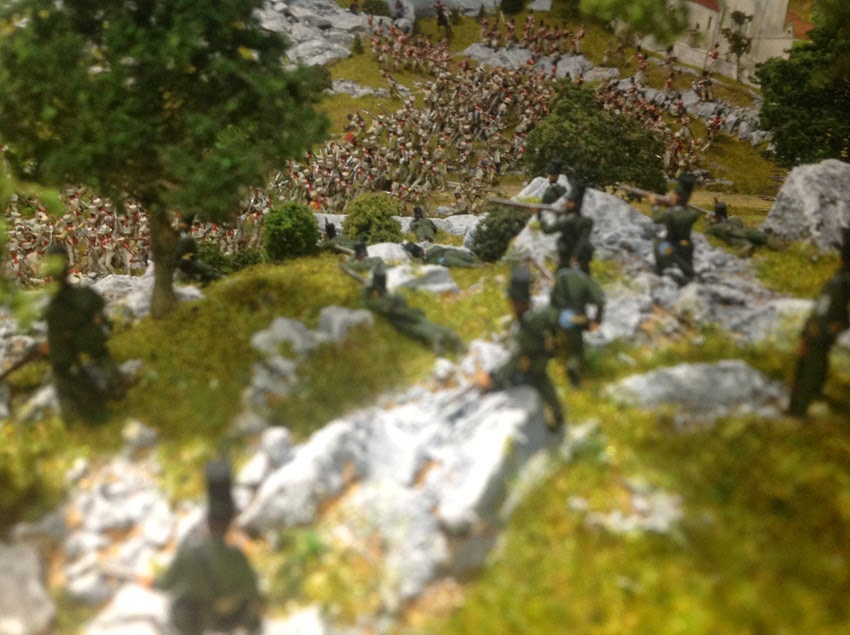 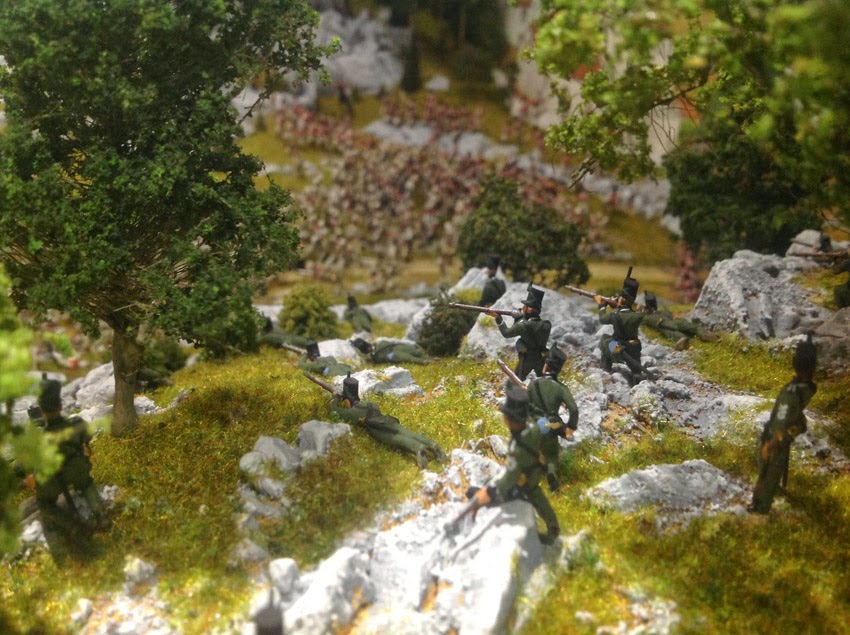 My iPad is clever, in that you can select an object on which to focus by tapping part of the screen. My 'proper' camera, admittedly not a very good one, can't do as much!


Another and much smaller diorama, and one that's not quite as finessed as either the monumental Waterloo, nor the smaller but still very impressive Vimeira, is this one, entitled The Bridge at Vera,1st September 1813. This one's also from the Peninsular campaign, but this time in Spain, and a pretty long way from Portugal! Part of the Battle of San Marcial, the action at Vera occurred right at the Western end of The Pyrenees. By this later date, as the location makes pretty clear, the French were decidedly on the back foot! 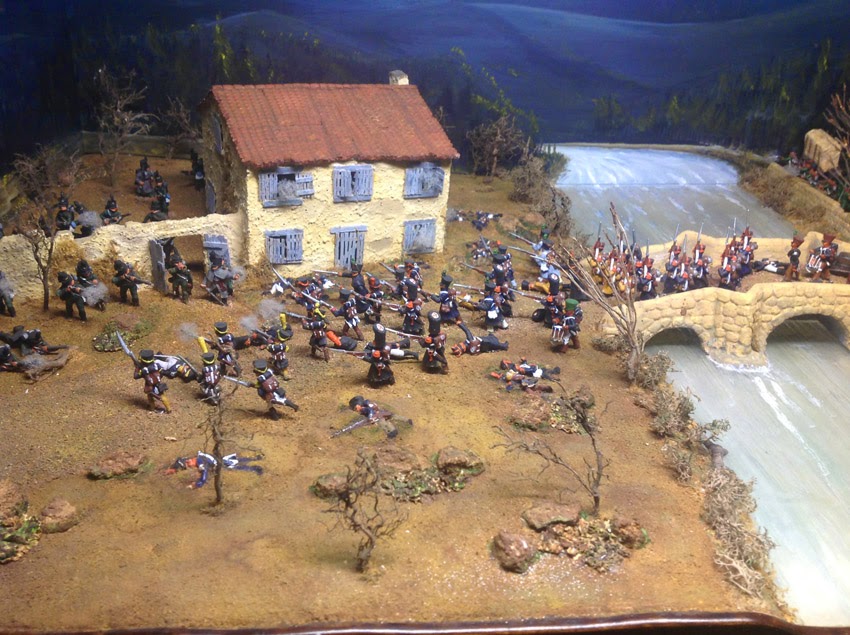 An overview, taking in most of the diorama. 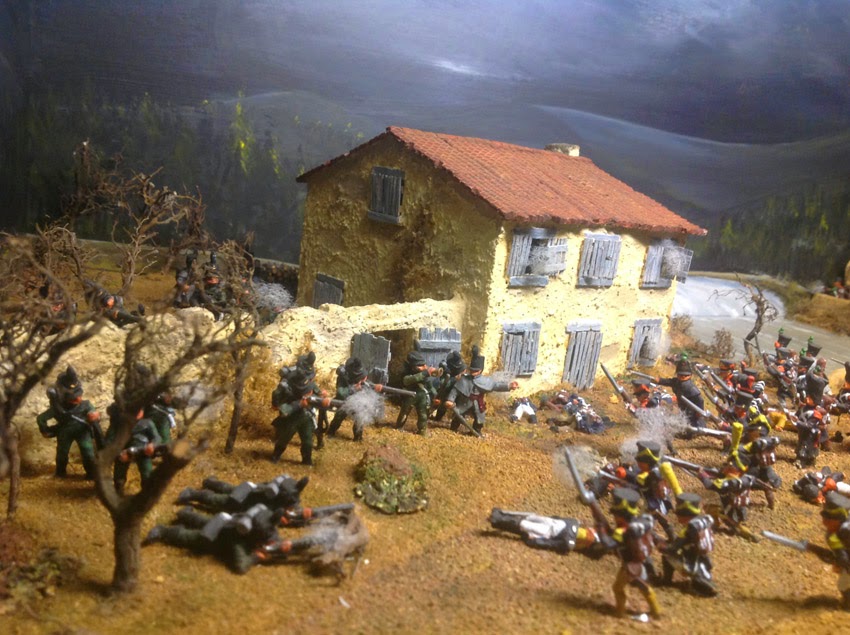 The left side, showing the Rifles (2nd/95th, I think) firing on the advanced elements of the attacking French column. 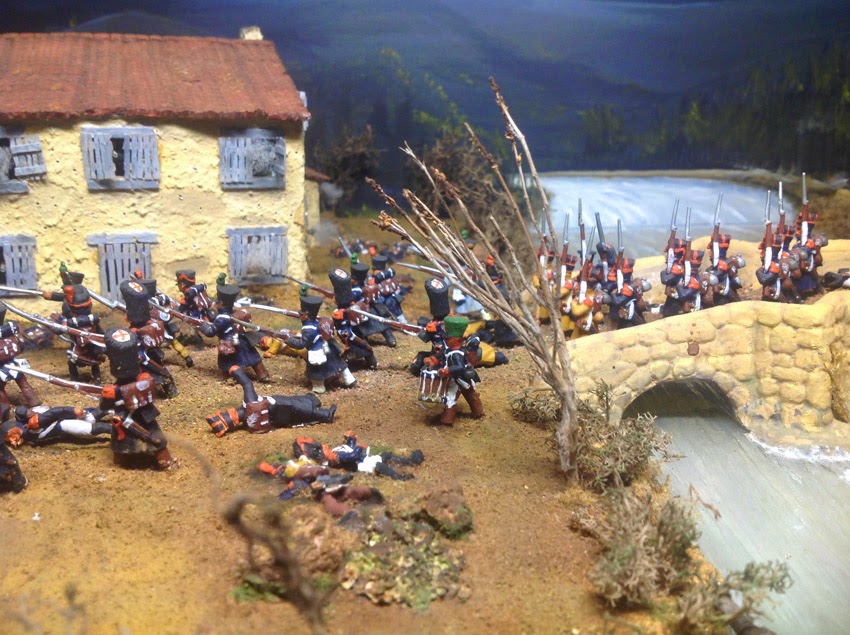 The Frenchies crossing the bridge. Can anyone identify the make of figures used here? They look like old-ish Minifigs 25mm to me. 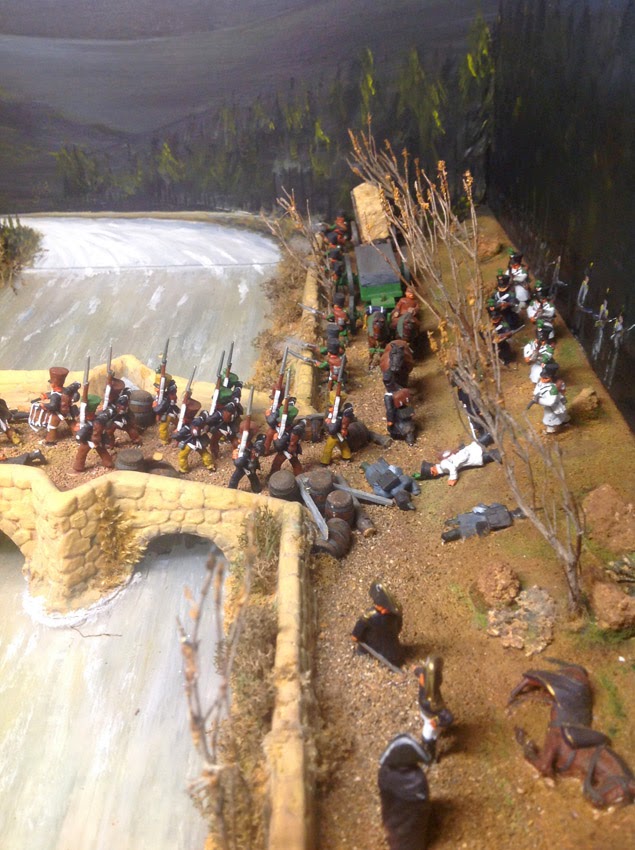 The other side of the bridge, with further french troops coming up.

There are also several dioramas depicting more modern actions, from a scene that might be the Indian Mutiny (I didn't take notes or read the captions, I just snapped away!), to several WWII scenes. Here are few more pics. 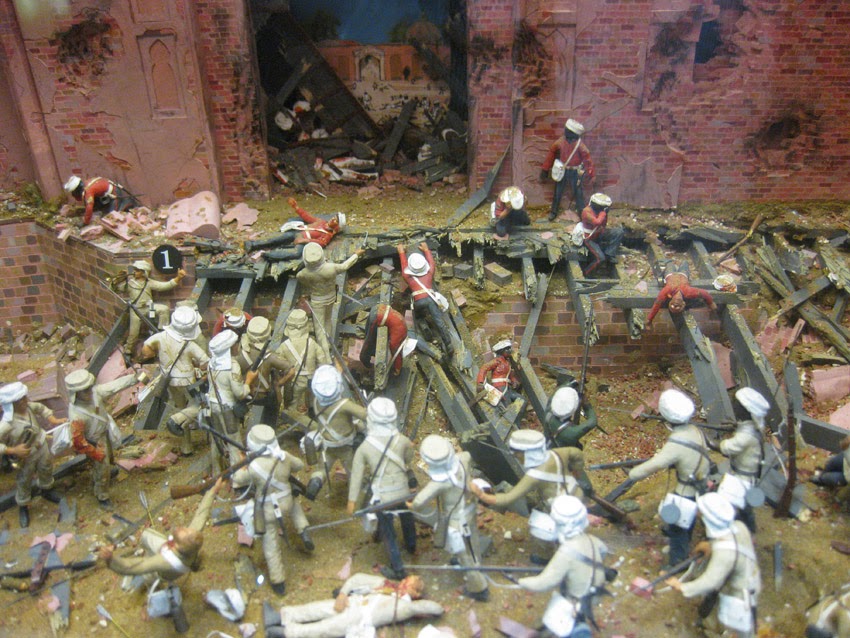 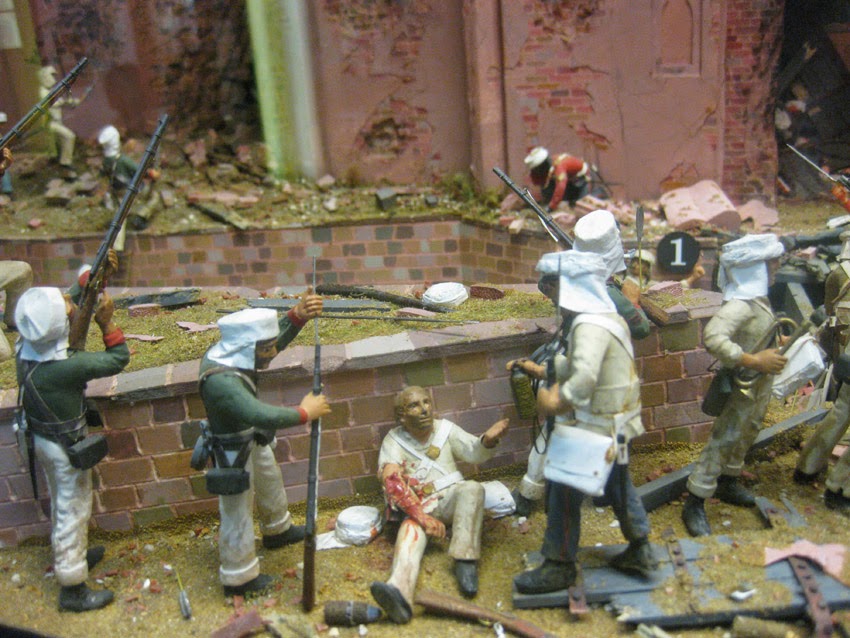 These next four look like they're in France or Belgium. Some of the detailing on the burned out vehicles is stupendous. I reckon these are Tamiya 1/35th, as I recognise some of the figures and models from sets I built, rather poorly, as a kid. 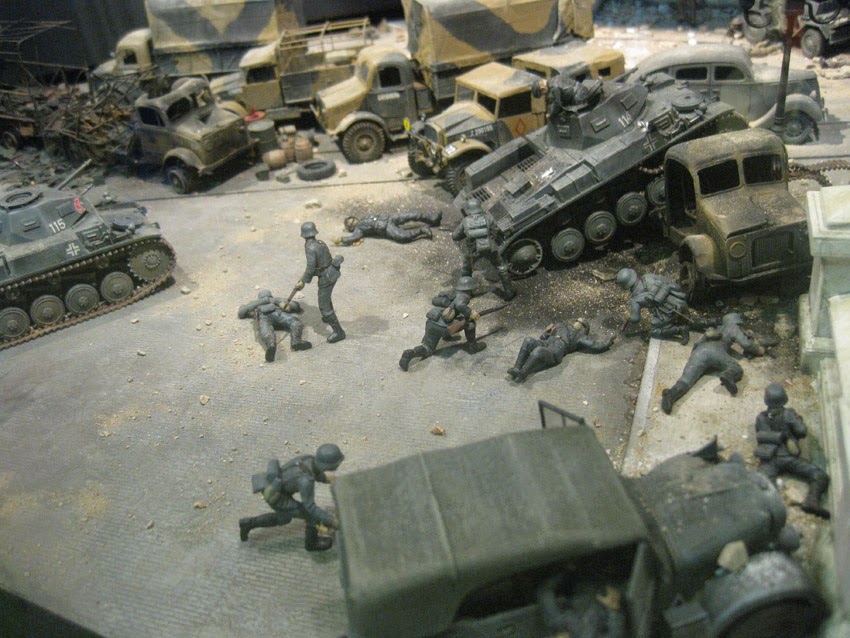 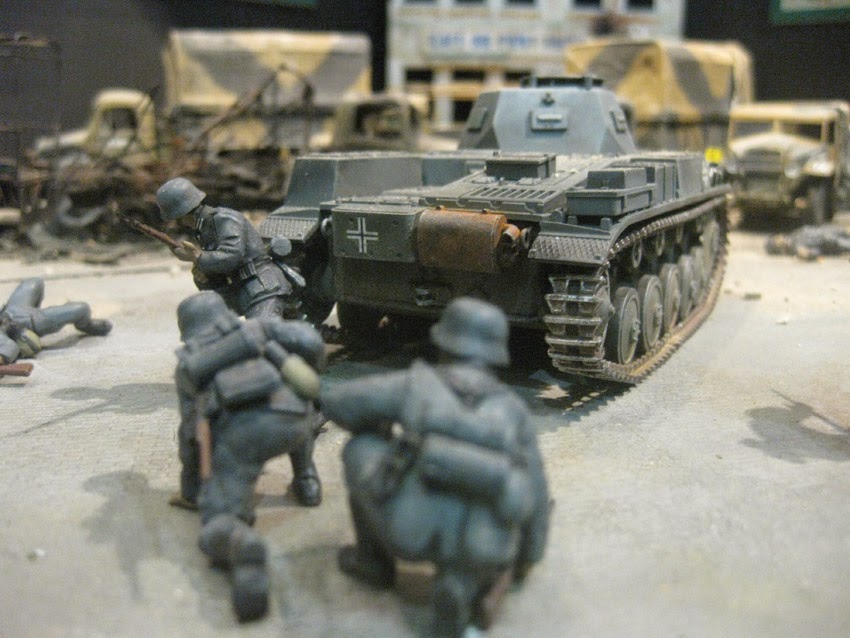 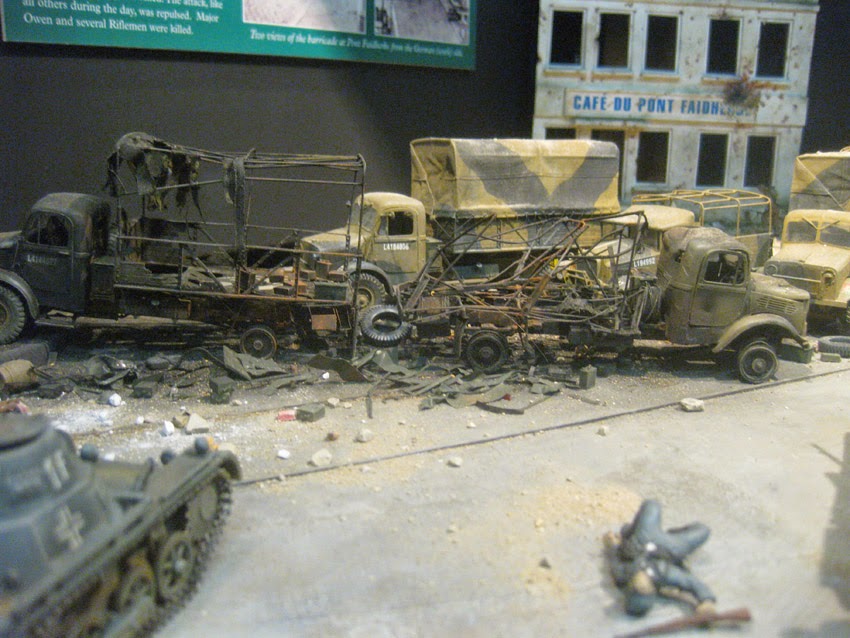 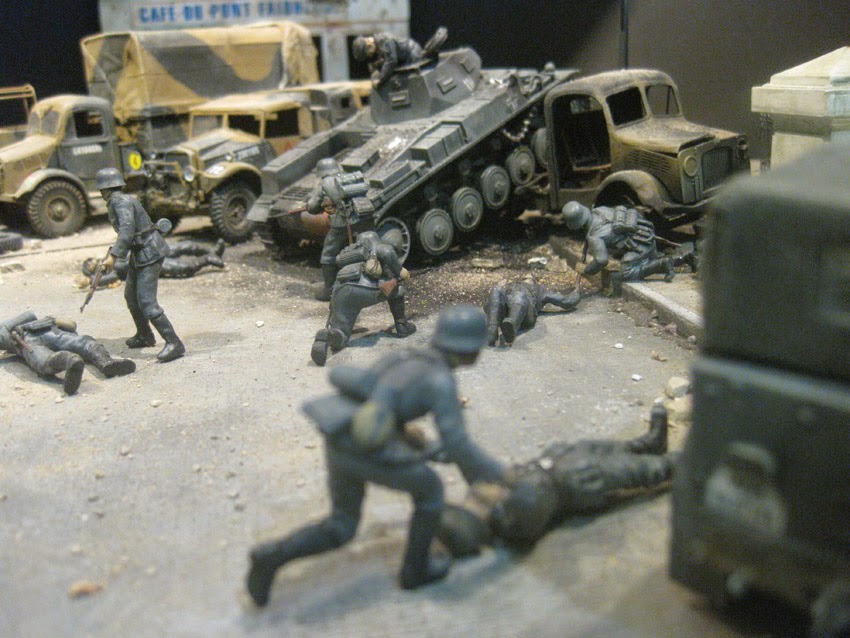 I wish I'd have made some notes or read the captions now! Obviously we're looking, below, at a glider-borne action here. Is this perhaps somewhere in Holland? As you may have noticed, I love dioramas! And I particularly like them if they have water featuring somewhere. Why is it that modelling water, a fluid, in a solid form, should be so seductive? Of course it's more seductive the better it's done. 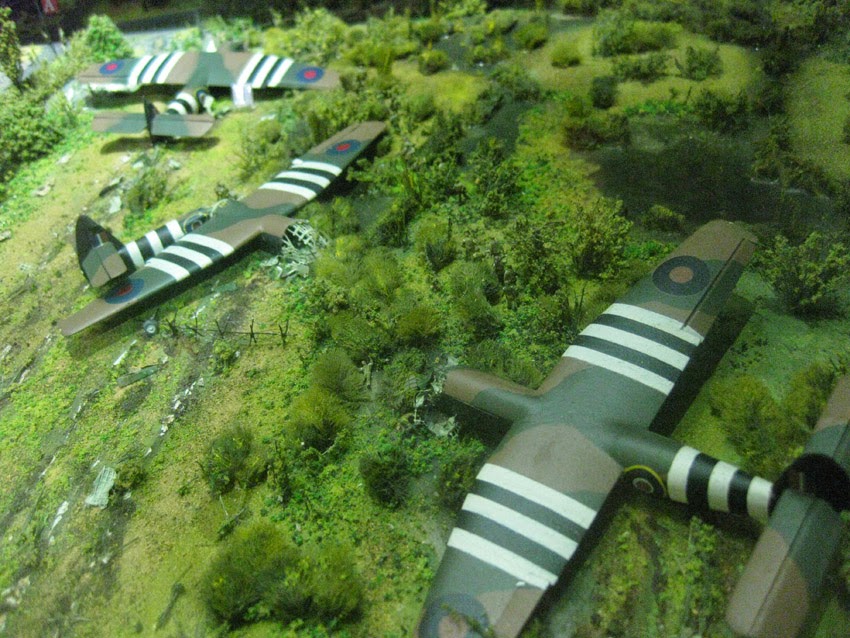 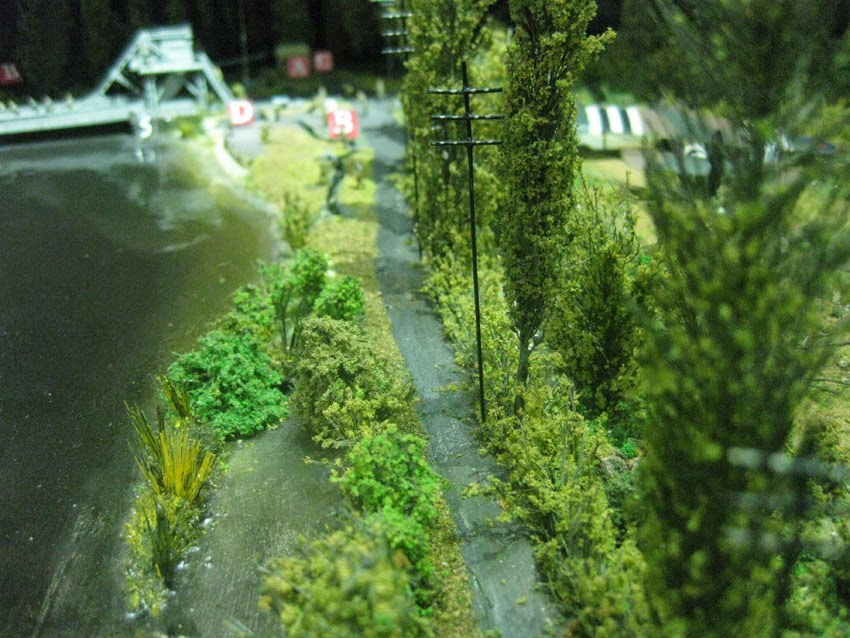 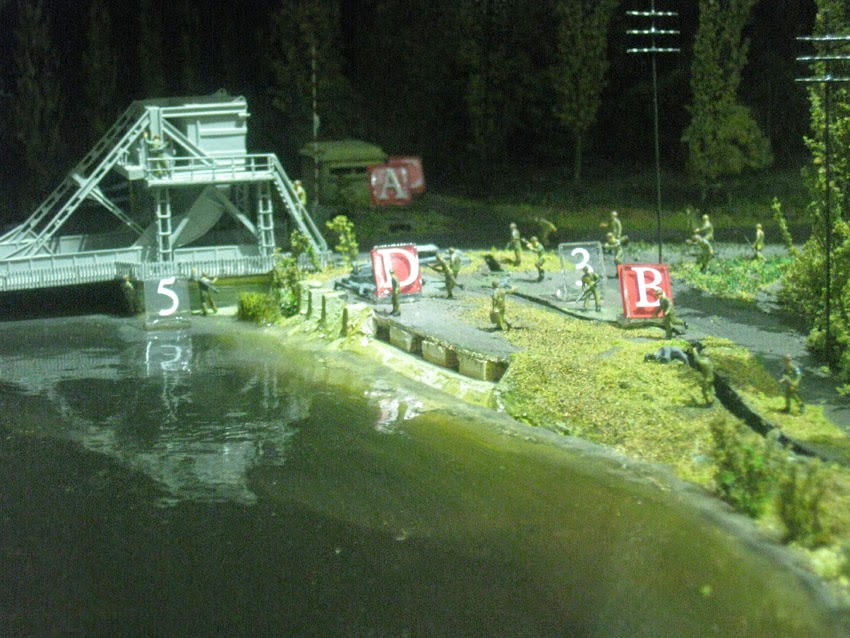 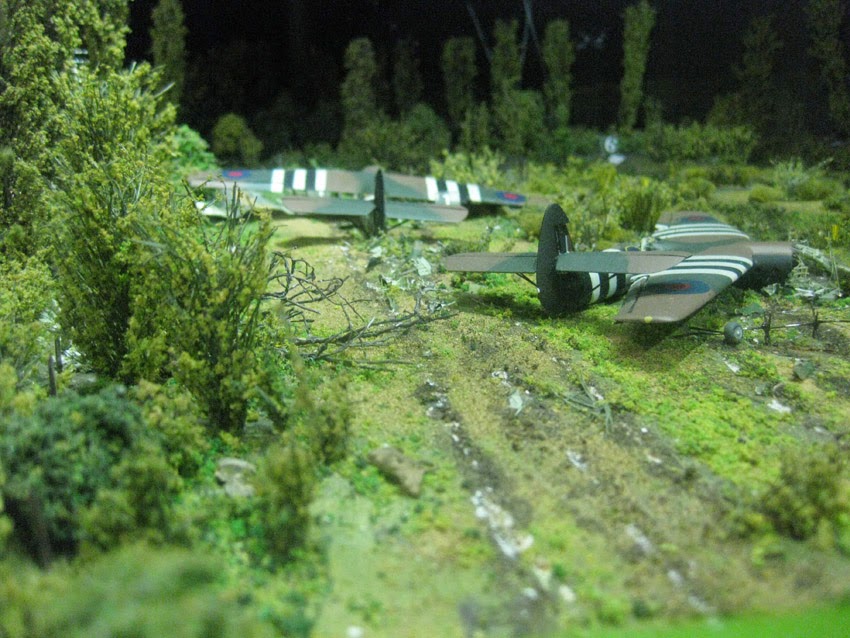 And the final diorama - there were a few more, but either I didn't photograph them, or the pictures were so poor I've chosen to leave them out - is a very well made jungle scene. 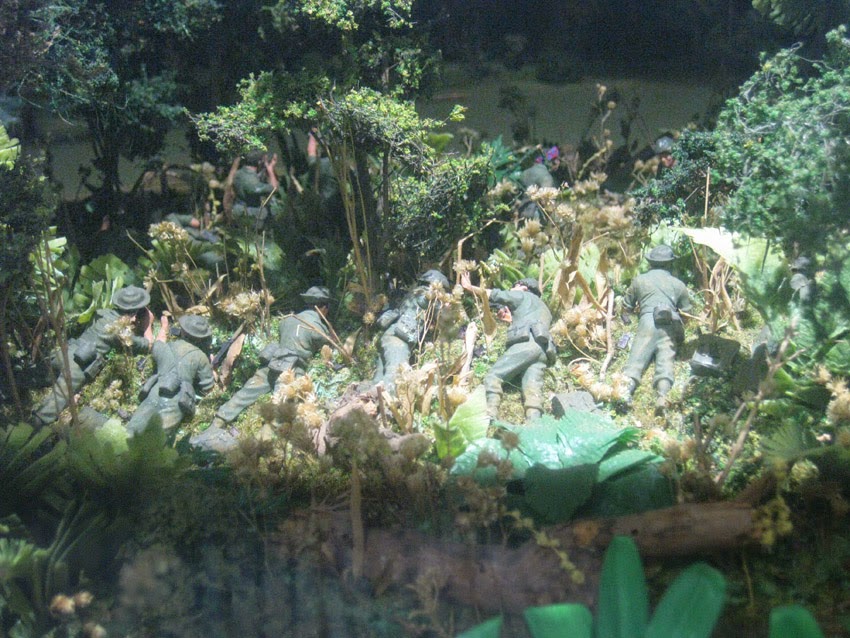 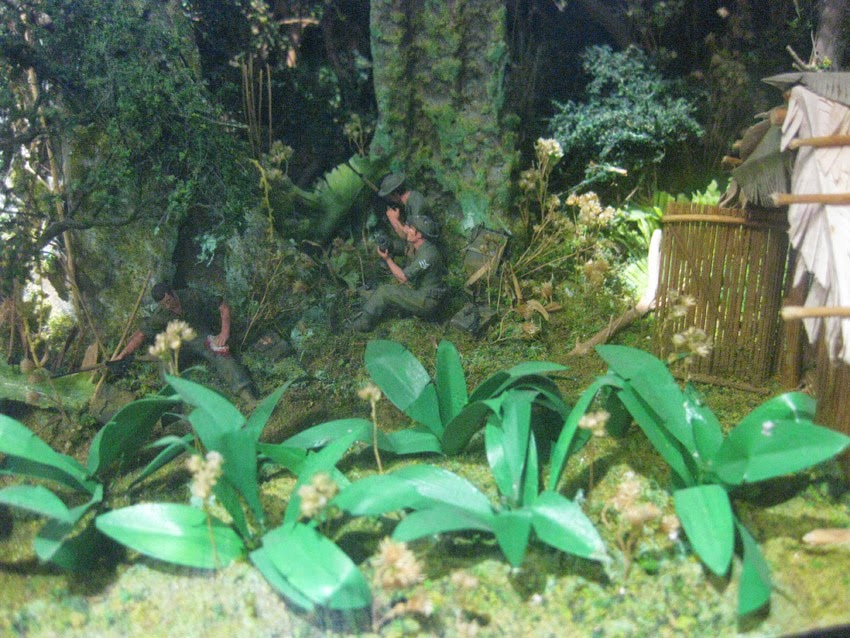 Of course it's not all models and dioramas. As the museum of the Rifles regiment, there's a lot more, including flags, uniforms, medals, large and small scale models of figures in uniform, weapons, correspondence, maps, and sundry other interesting militaria, mcuh of which relates specifically to the regiments and their antecedents. 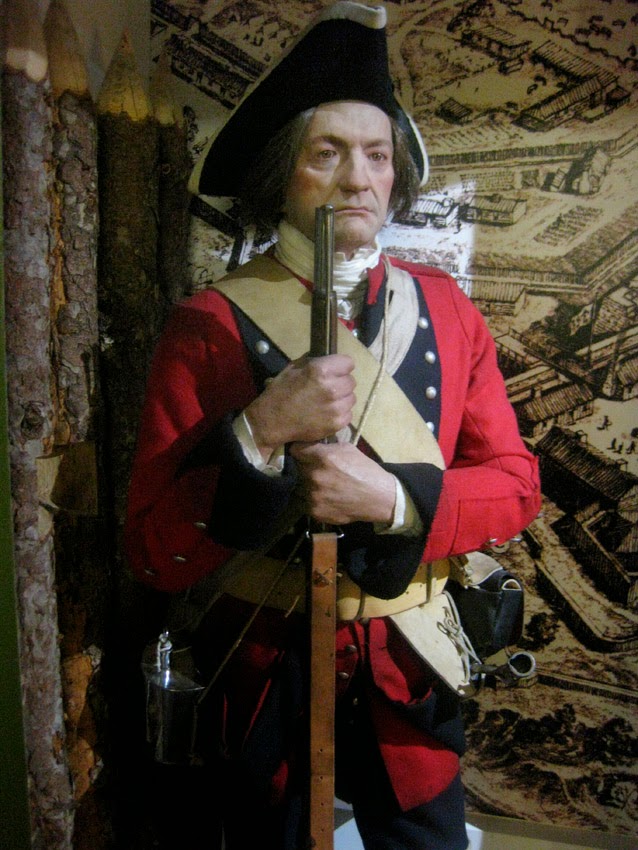 A rather realistic life size figure. Doesn't look too chuffed, does he? Mind you, how would you feel being stood there for years on end? 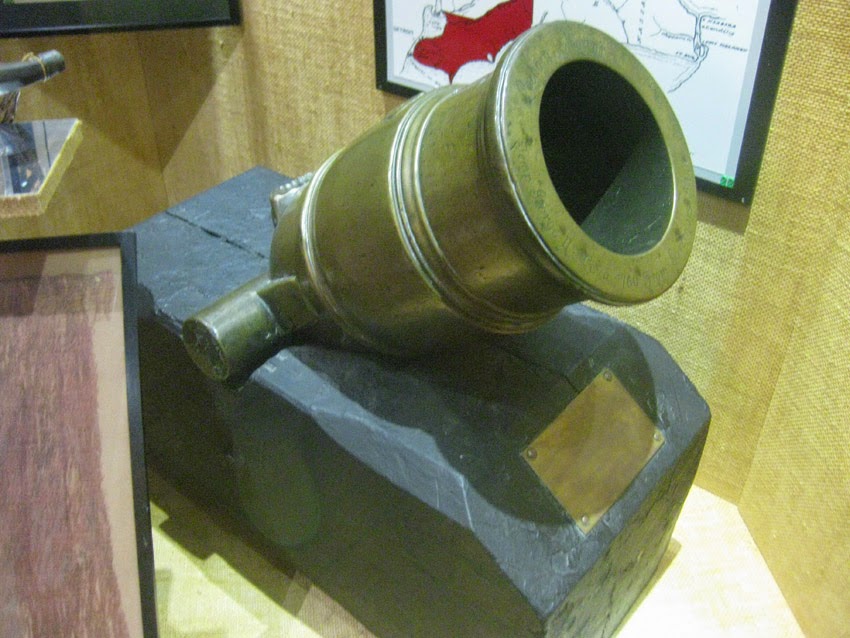 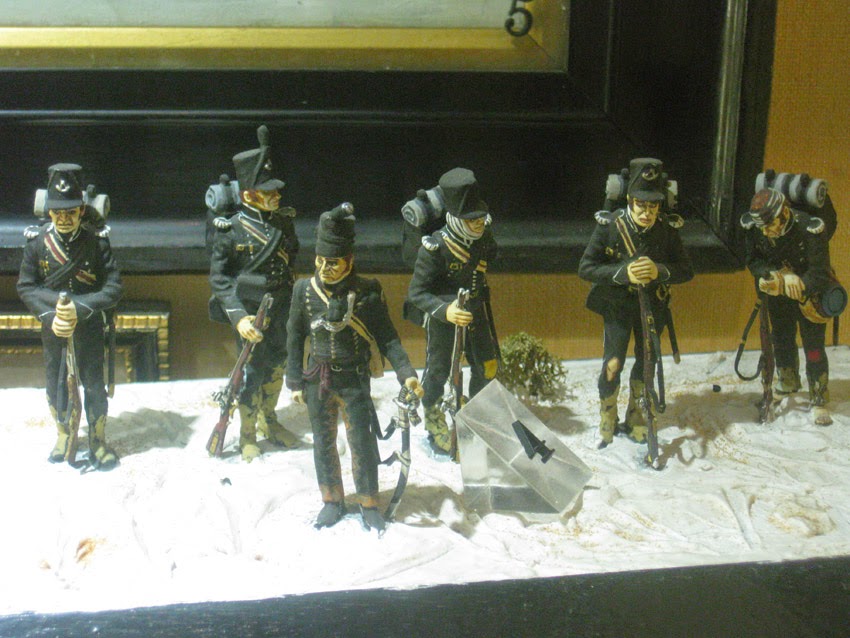 Above and below, miniature figurines depicting soldiers of the Rifles regiment, in the Sharpe-era dress so well known from on't telly. 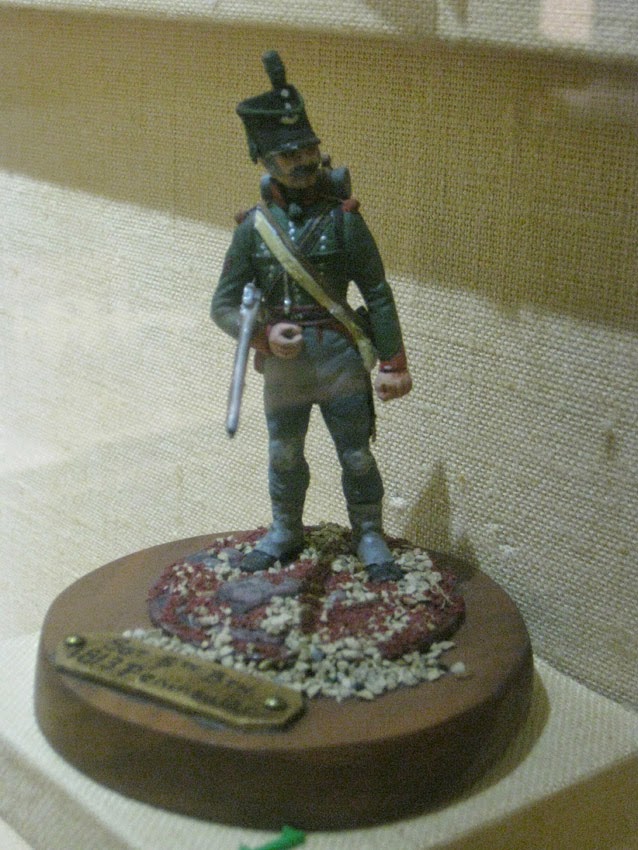 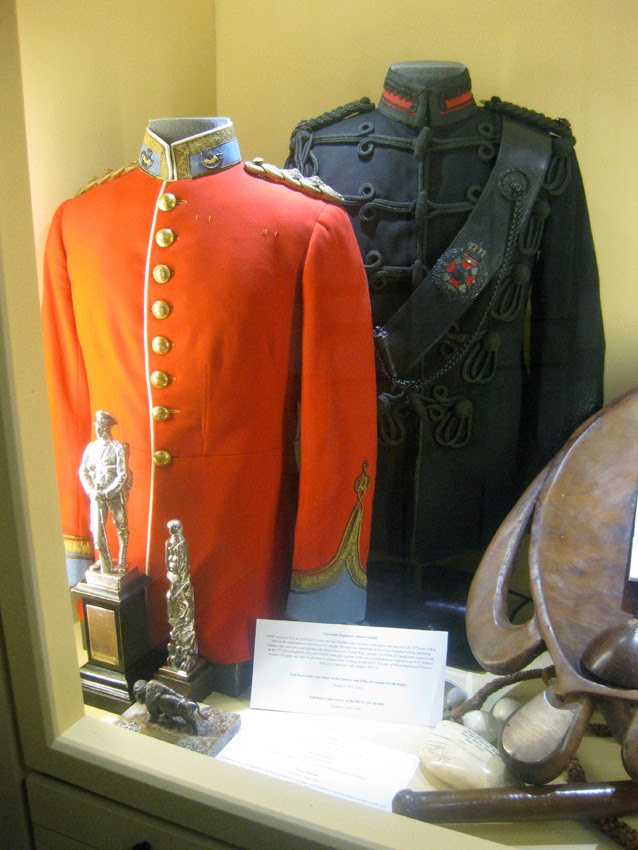 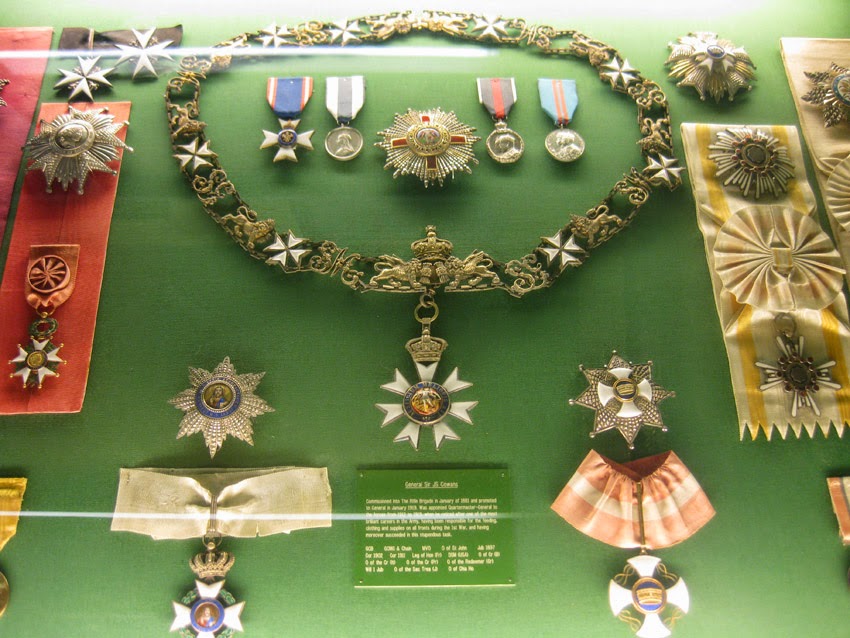 The trinkets chest: as Boney said 'with such baubles, men are led'! 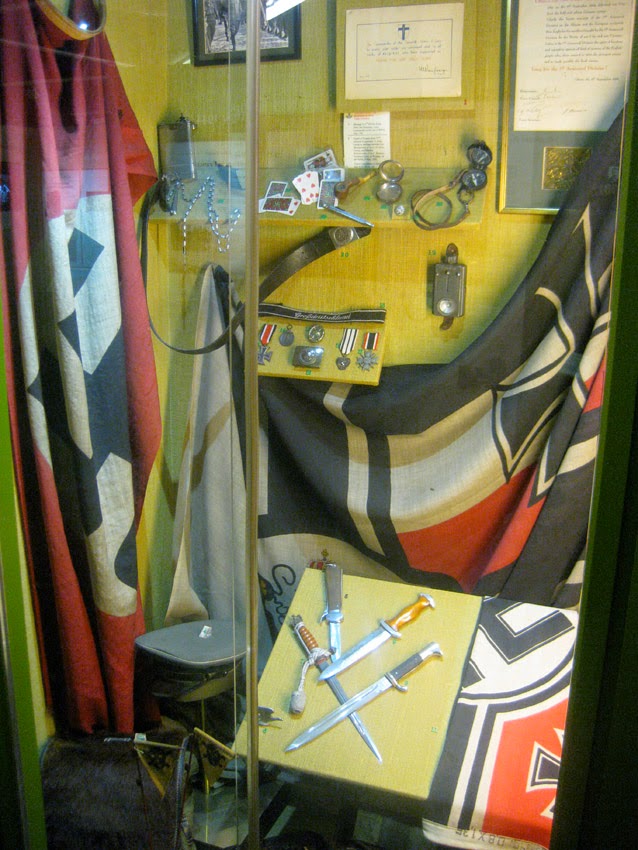 The obligatory cache of Nazi memorabilia. Always makes me think of that Father Ted episode (Father Ted: 'Funny, how you get more right wing as you get older.'). I have to confess though, I'd rather like a set of swastika emblazoned playing cards!

If you're near Winchester, give the museum a look over. In fact, even if you're not near, get you down there! We went on a day trip to Winchester from cambridge, in honour of which journey, and its point of origin, I include this final photo, from the Great Hall of Winchester Castle. 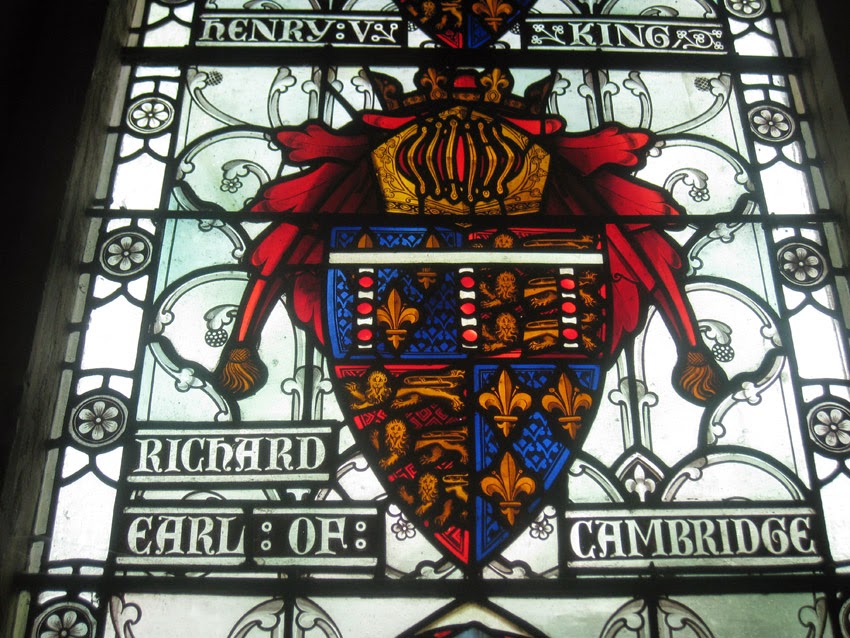