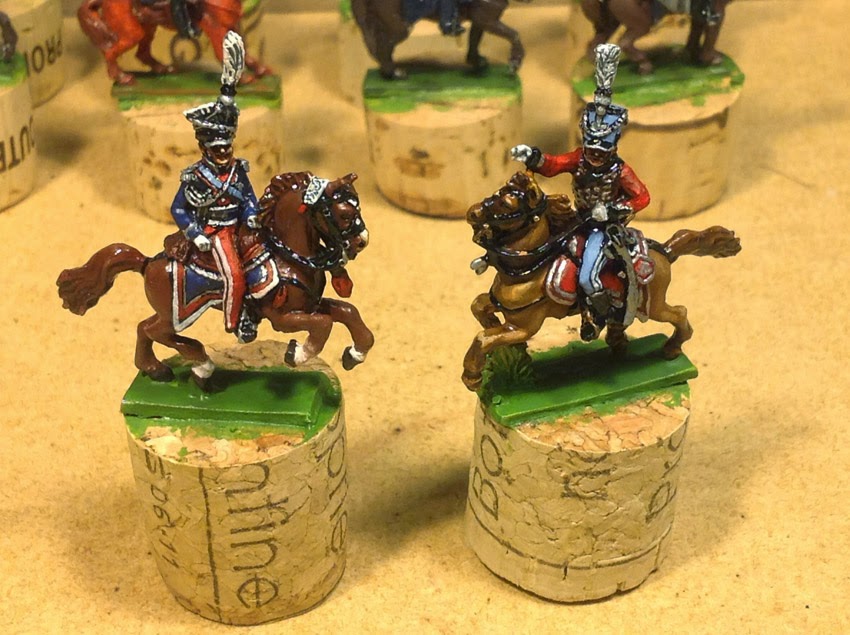 Painting these AB generals and their staff is proving to be a very mixed affair for me, psychologically, inasmuch as I oscillate between exaltation and despair! The downside of these fantastic sculpts, and the great paint jobs one sees on the web, inc. meister Antony Barton's own superb work, is that they demand a lot of one. Anyroad, as they used to say hup-north, here's how two of the eleven figures currently on the painting bench are looking: 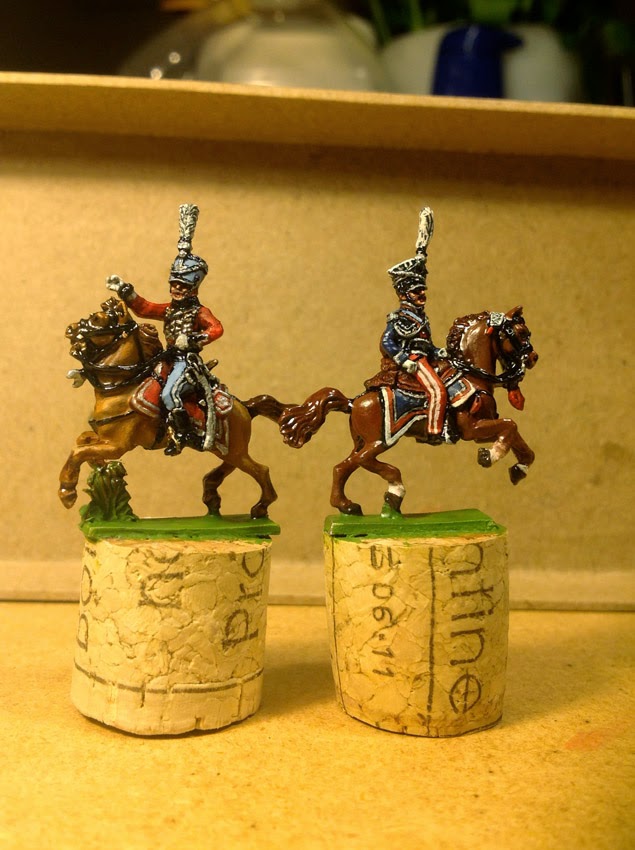 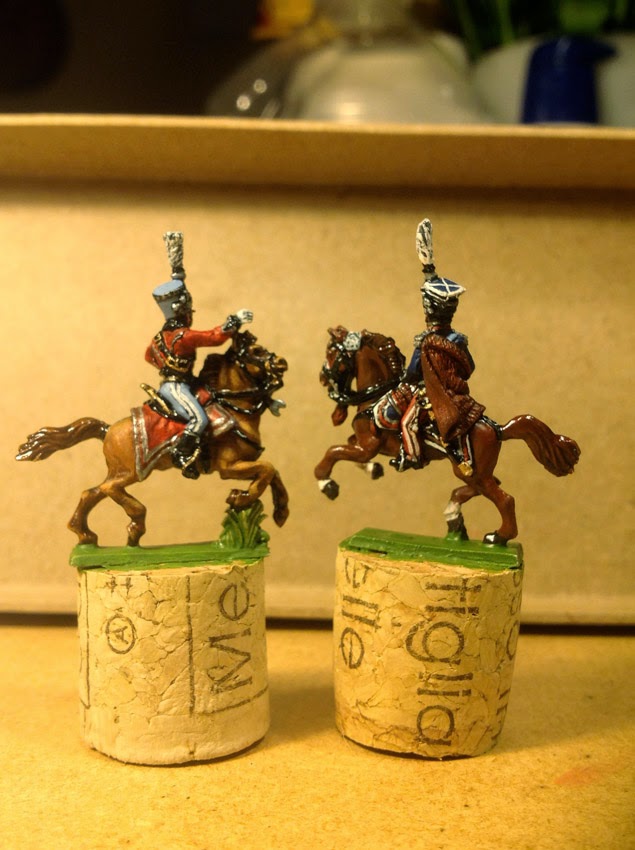 These are, of course, prince Poniatowski and his hussar-style ADC. I used the image below, amongst others, as reference. But as close study of that pic and my mini will show, I also diverged from that pic as well. My version is a kind of hybrid, as is the ADC, of numerous sources, also constrained by my own preferences and limitations. 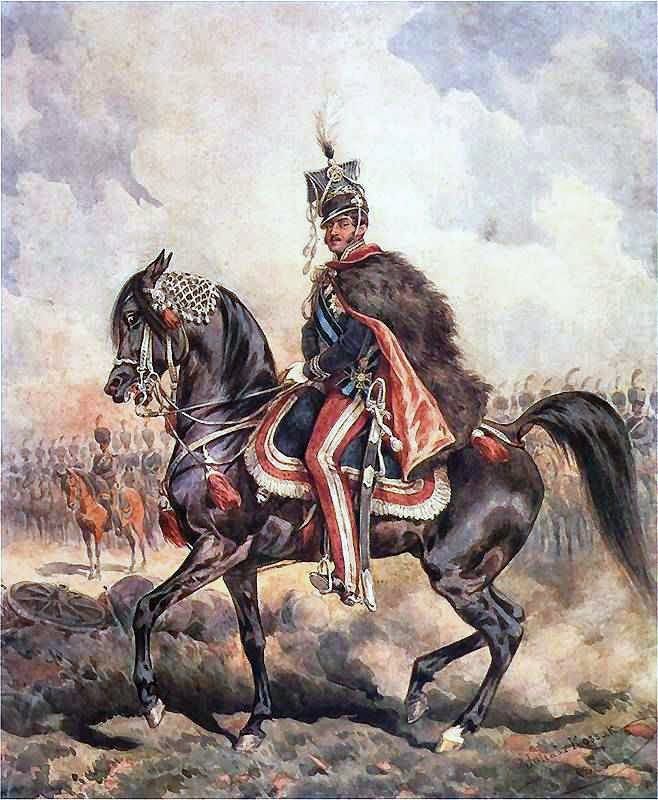 A nice bit of ref.

Whilst painting these I've been reading the fairly short but hugey enjoyable memoirs of Charles Parquin, a cavalryman who worked his way up from a fairly lowly rank in the Chasseurs of the line to a moderately high-ish one in the Imperial Guard Chasseurs. 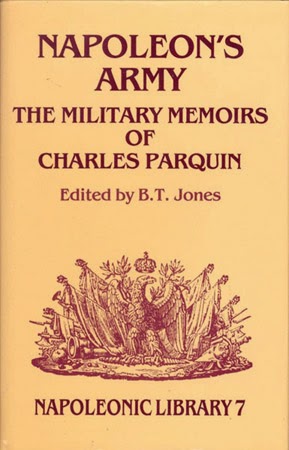 Parquin's character and life experiences give one a sense of the kind of man that Poniatowki's ADC might've been: ambitious, brave, having seen numerous theatres of war and accrued numerous wounds, and possibly also, as with Parquin, something of a duellist and a ladies man! Indeed, he's exactly the sort of beau sabreur one imagines Arthur Conan Doyle basing his Brigadier Gerard character on.

Most of Parquin's 20th Chaussers went to Russia, but his troop was in Spain. This is the first of the large and ever-growing pile of Napoleonic books I'm acquiring that I've read that spends a good deal of the narrative time in Spain. I don't quite know why, though I have my theories, but I've always consciously avoided the whole Peninsular imbroglio. This was the first time I felt drawn into it, thanks to Parquin's charming and exciting account.

I think I'll work on Ney next, the legendarily brave Marshal who appears, begrimed and dishevelled, unrecognisable to his comrades in arms, boasting that he was the very last man out of Russia. AB's lovely sculpt shows this charismatic commander sans chapeau, all the better to show off his jalapeño-head 'barnet', sword arm raised, as he no doubt inspires his cohorts to action. At some point I really must get the Eureka Miniatures 'retreat from Moscow' Ney, which is modelled on the famous painting by Adolphe Yvon, for my 28mm collection. 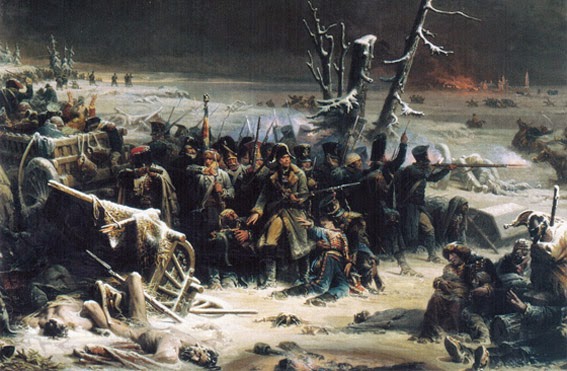 Ney with the rearguard, Russia 1813, by Adolphe Yvon. 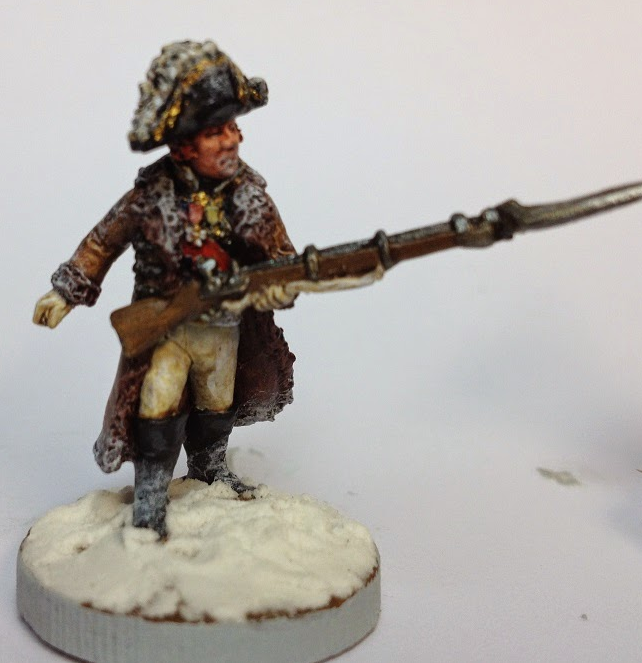 My 'wargamers piles' have only gotten worse, thanks in no small part to the Perry Twins and their recent and very fabulous Retreat From Moscow releases: once I found out about these I simply had to have them. So far I've got all the foot figures. I'm trying to hold off buying the cavalry or any further releases (or similar stuff, like the  Murawski Miniatures Poles) until I've painted the foot figures. It's clear to me that the Perrys have been using the superb works of Faber du Faur as reference and inspiration for some of these brilliant miniatures. 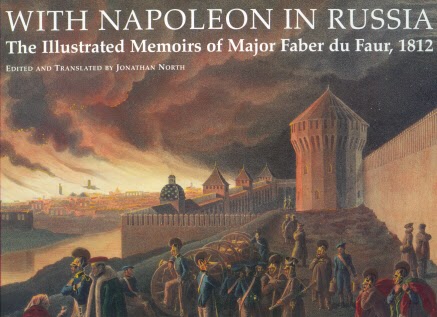 It's interesting for me, as an Art School graduate and occasional artist/illustrator, as well as a collector and painter of miniatures, etc, to see the process designers might go through. For example, as the Perry themselves say, in a TMP post on the subject, they're making their Retreat From Moscow figures from a combination of influences, primarily faber du Faur, but also Albrecht Adam and Carle Vernet.

In the images below one can see that the 3rd figure from the left in their TMP 'hobby news' press-release pic (the 'stragglers' shown above), combines elements from several figures in the Faber du Faur picture, entitled 'Near Smorgoni, 3rd December', reproduced below. It's interesting how they've added the belt, from the grenadier with bearskin, to the guy in the shako. 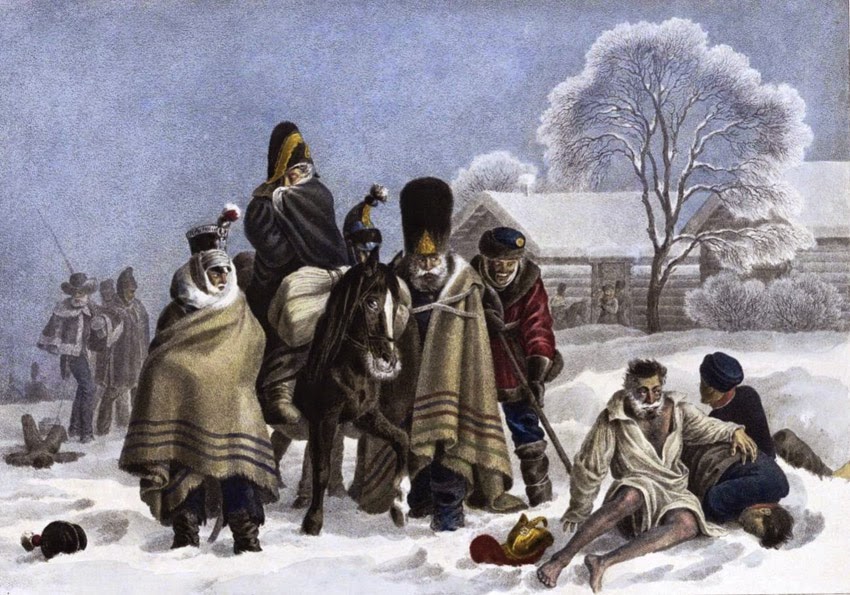 [1] This pic comes from an excellent post you ca find here, on the dux-homunculorum blog.

[2] An essential reference work for those interested in the Russian campaign of 1812 (and, like Parquin's memoirs, published by Greenhill).