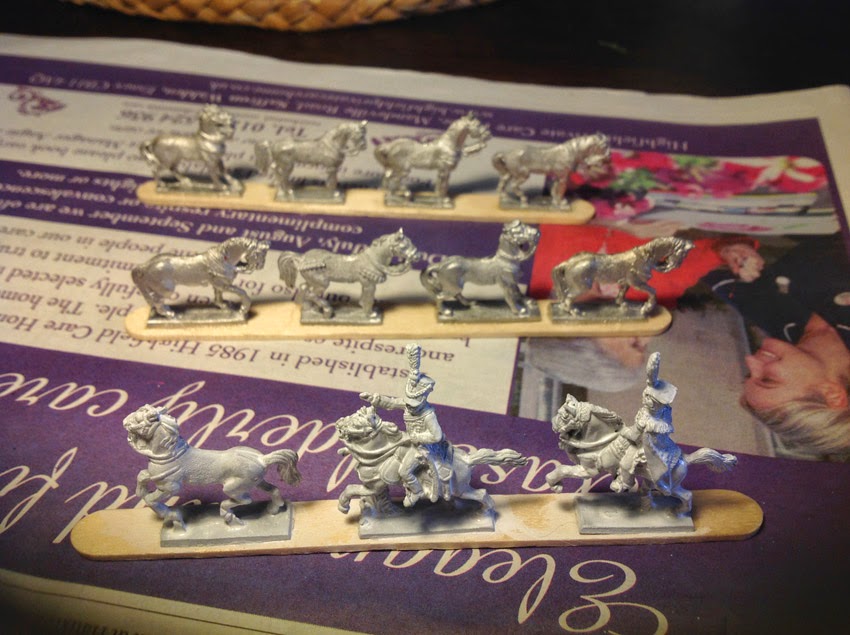 Mounting the horses on lolly sticks, and starting to undercoat. 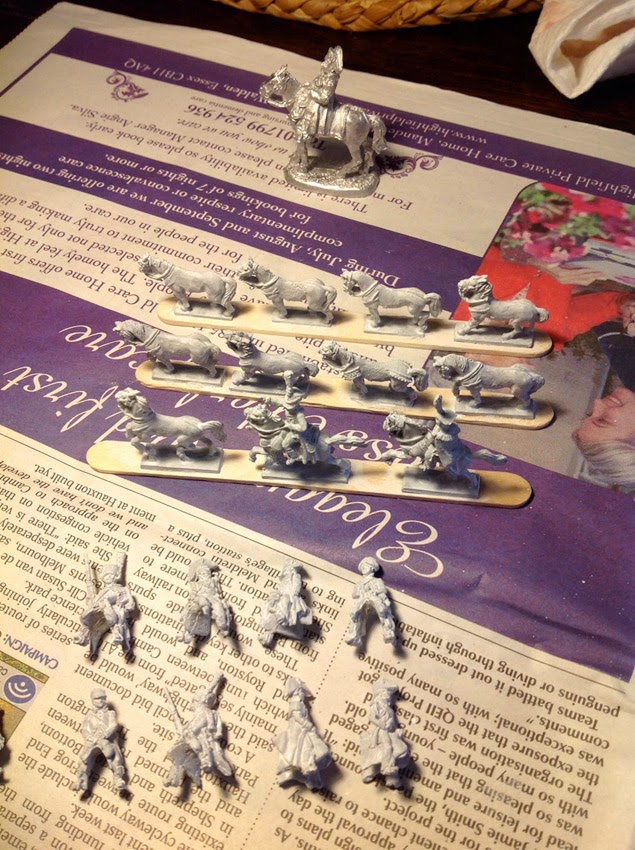 As mentioned in a previous post, I intend to have command stands for the generals in my Russia 1812 wargaming, where my armies will be in 6mm & 10mm, in larger scales as well, as Callan and Schneider do in the Callan movie. To this end I have recently purchased a bunch of figures from the AB range, in 18mm, as well as some Perry/Foundry 28mm. 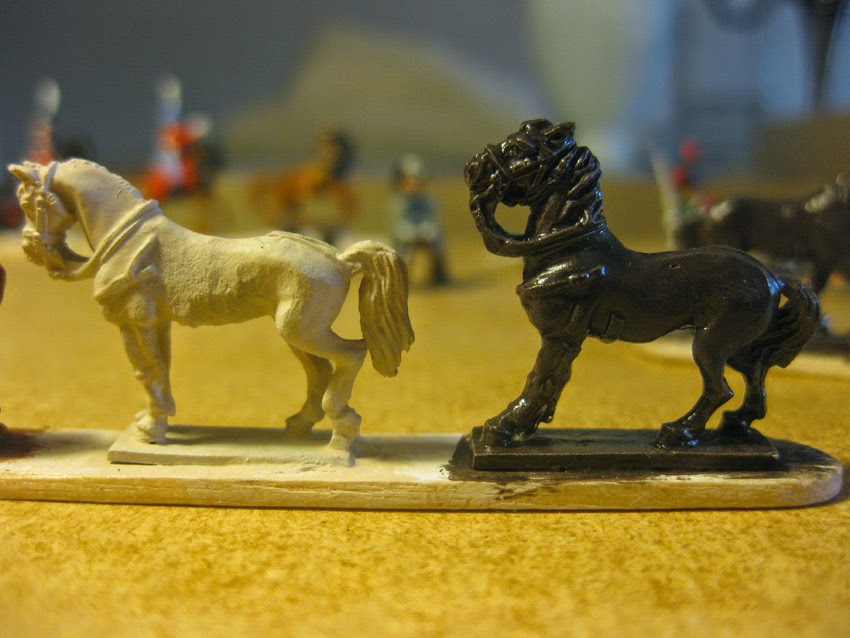 Blocking in base colours on the horses. 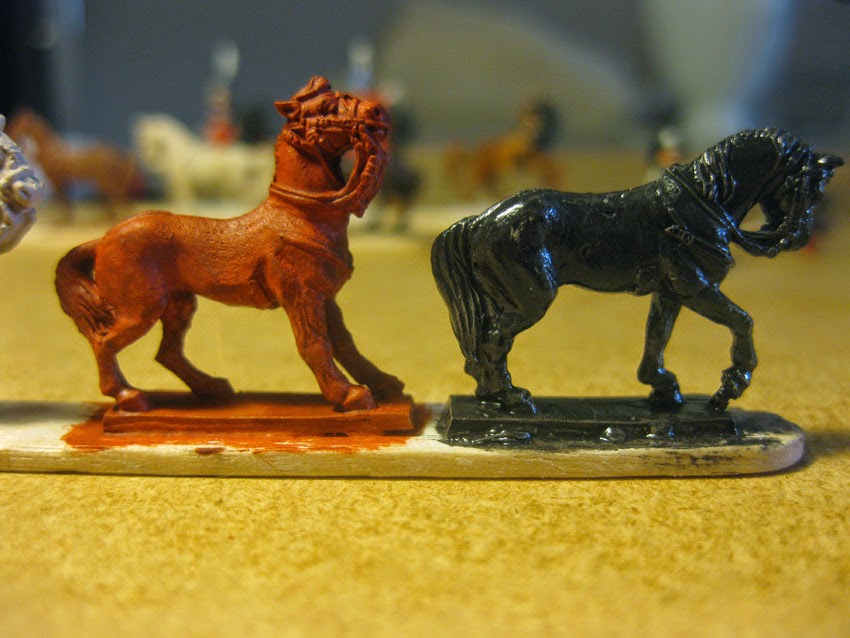 As already detailed in several prior posts, I worked on an Allan Perry Napoleon Crossing The Alps figure, based on the famous and iconic David painting, in 28mm. That was my first proper venture into this area. Well, actually... I did also buy and paint up the Warmodelling 15/18mm Borodino Nap, some time back, which minis I may return to (at some point!). Anyway, putting to one side concerns over strict chronologies of past activities, I'm currently painting the 18mm AB figures, which are fabulous little masterpieces, sculpt-wise. I got Napoleon and staff (8 figures), Ney as an individual, plus Poniatowski with an ADC, all mounted.

The next three individual close-up pics demonstrate the beauty of the AB figures, I think (please make allowances for the unfinished state of my paint-job!). 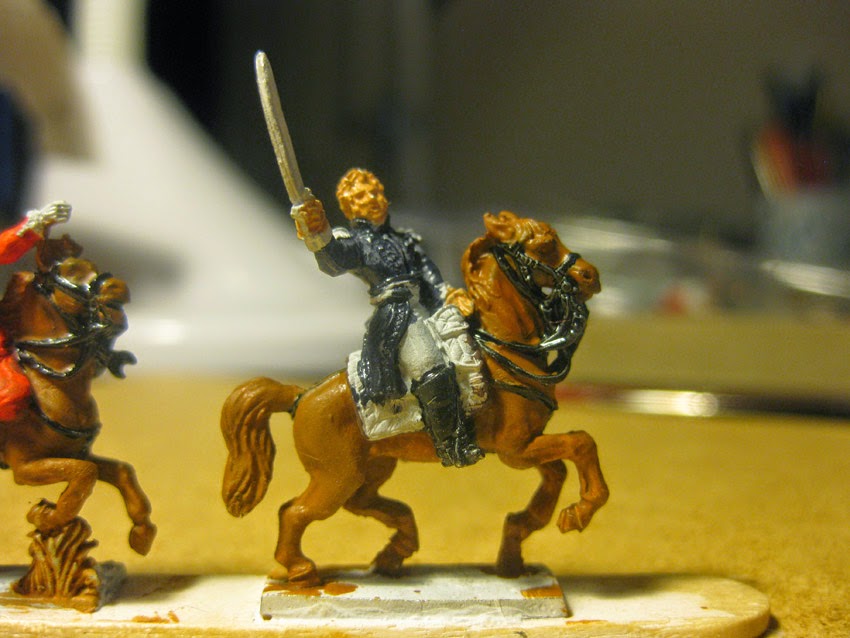 Marshal Ney, sans chapeau! At this point I've superglued the riders to their horses. 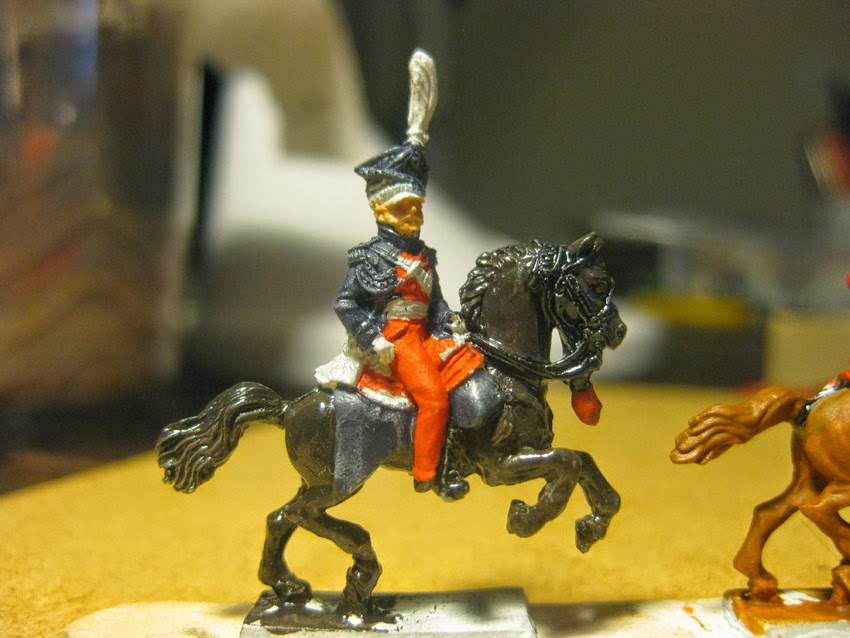 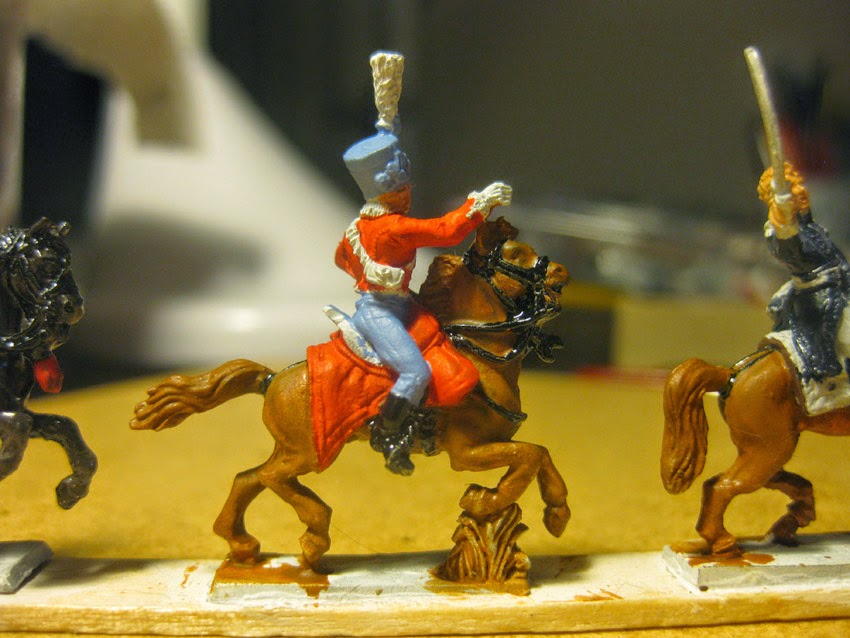 I decided to do Anthony Barton homage in my approach to painting his little wonders, and undercoated them in Humbrol matt white enamel. As he rightly points out in a painting tutorial he did for Eureka Miniatures (which you can find here: Painting Small Figures by Tony Barton), the current fashion for undercoating in black isn't an approach many (if any) self-respecting fine artists might employ, as a dark undercoat kills the luminosity of any brighter colours layered over the top.

There's also what he refers to as the 'scale/distance effect', or some similar term, whereby small objects, which by their size appear farther off, need to be brighter than normal in order not to appear dull, etc. The guide is an entertaining as well as informative read, as for example, when, having lambasted black undercoat ('I realise it’s one shortcut to lining out the various parts, but I think it produces a very coarse effect') he goes on to damn drybrushing as 'another unrealistic abomination'! 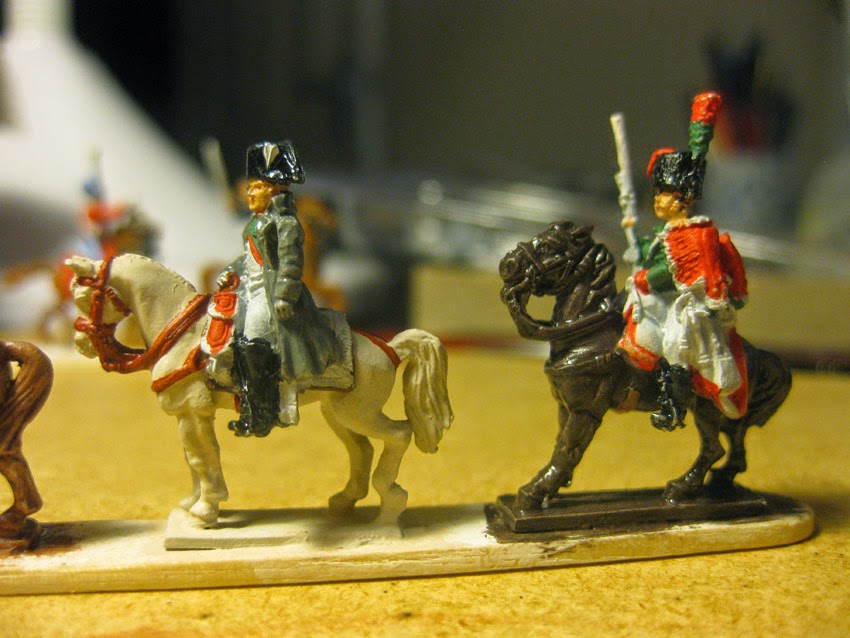 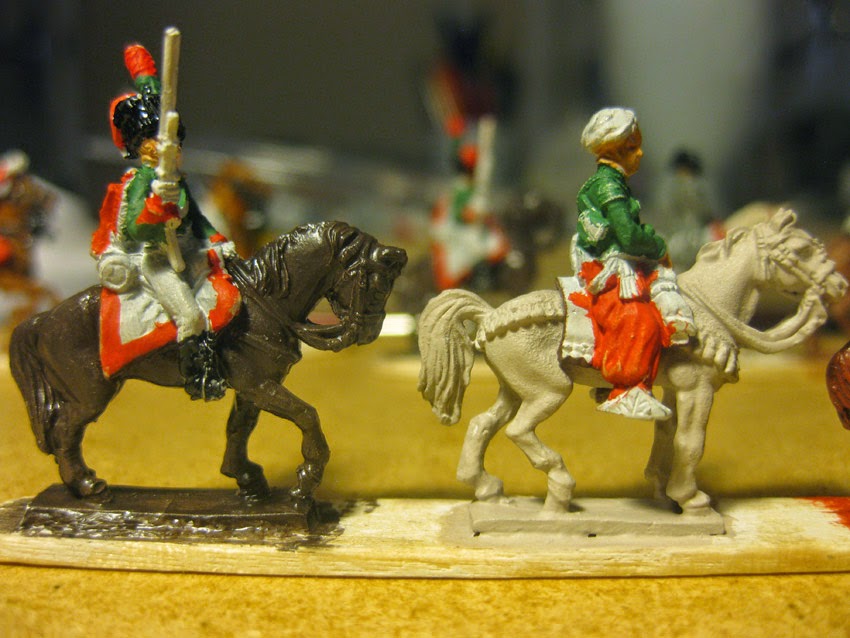 Given his prowess as both a figure sculptor and painter, it's got to be worth reading this guide, although whether Barton's ideas will suit dyed-in-the-wool abominators conditioned by years of black undercoating and drybrushing is a moot point. Certainly I have seen for myself how much brighter colours are on miniatures when painting over a white base coat (but as a Fine Art graduate I knew about this anyway), but I have to say that in other respects - chiefly the fact I often felt I needed to do more to achieve darker under-painted areas (e.g. behind detail like fancy lace or braid) - I'm not sure if his approach isn't a bit too labour intensive for my purposes.

With thousands of miniatures to paint, I can only contemplate this approach for these few showcase command stands. 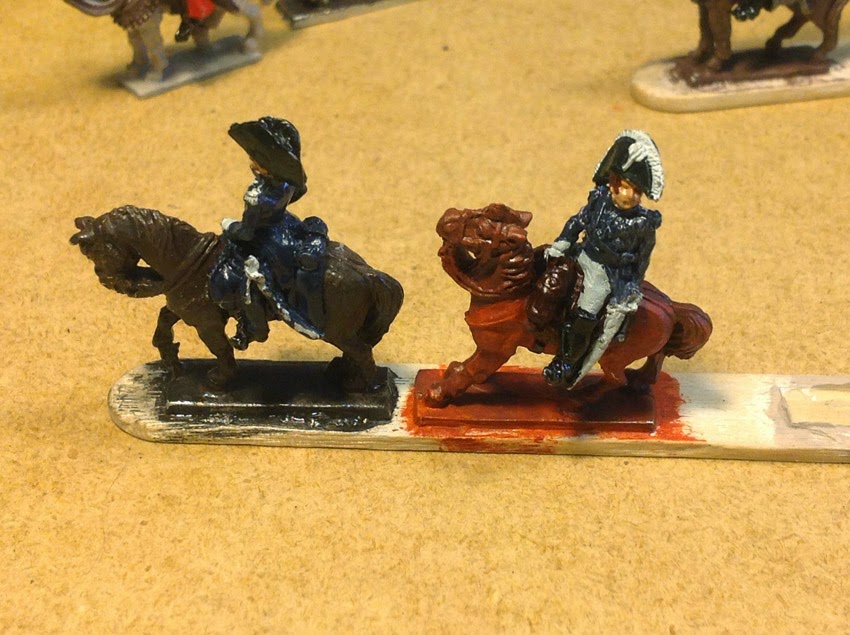 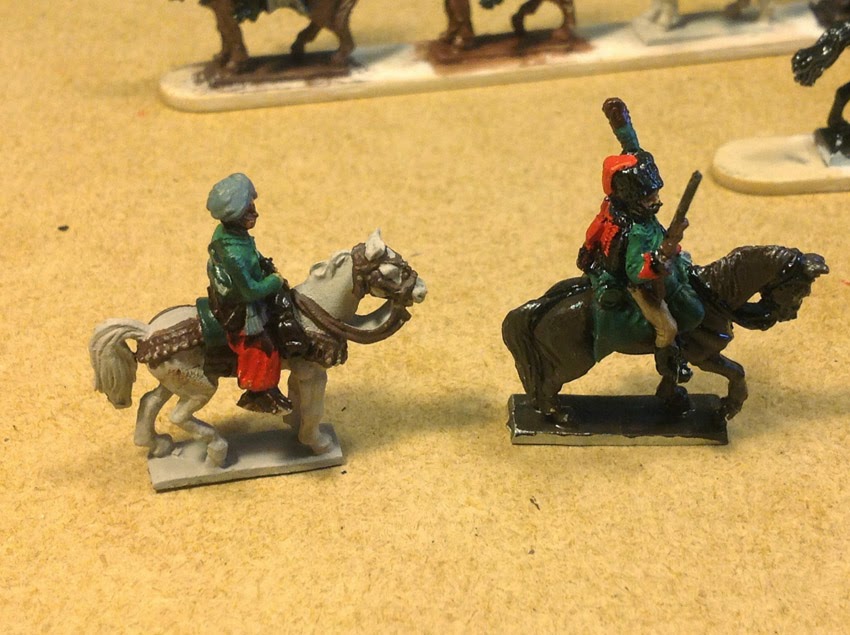 More blocking in of base colours... slowly but Shirley... 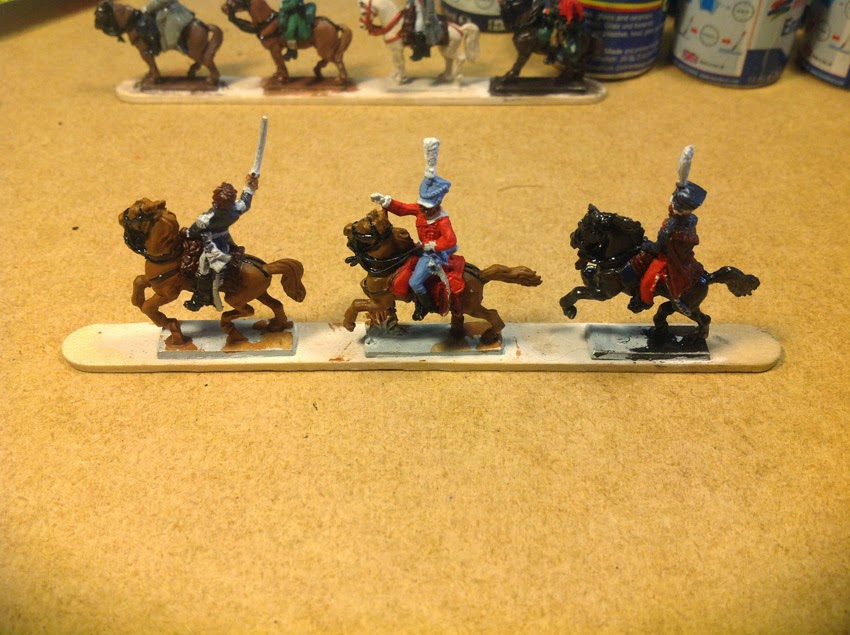 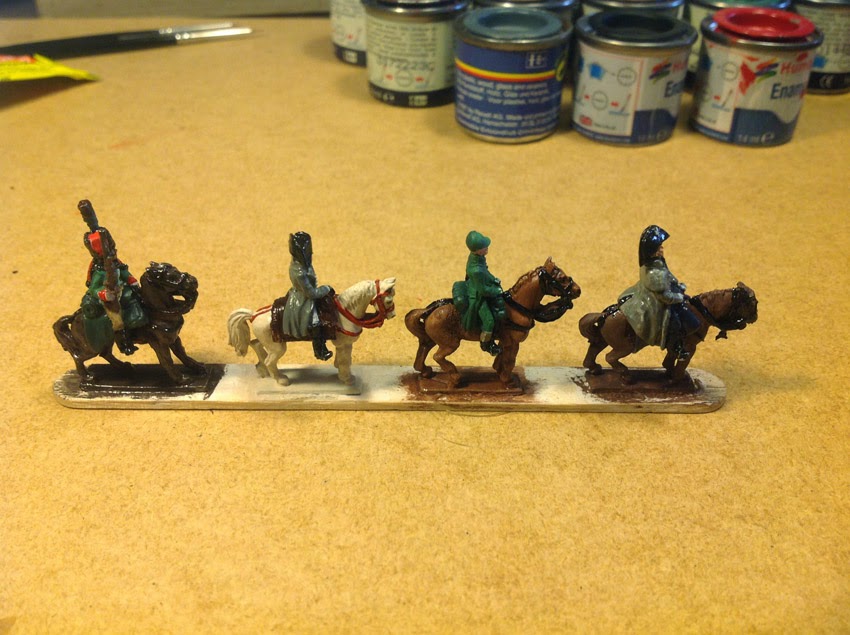 I intend over this and the next however many posts to document the work on these minis. This might be a bit piecemeal, as I can't find the camera on which I took the first few pics, so (as things stand at the time of posting this) the pics showing now represent the second or third stage. Stage one was basing and undercoating in white. Stage two was blocking in the main colours. 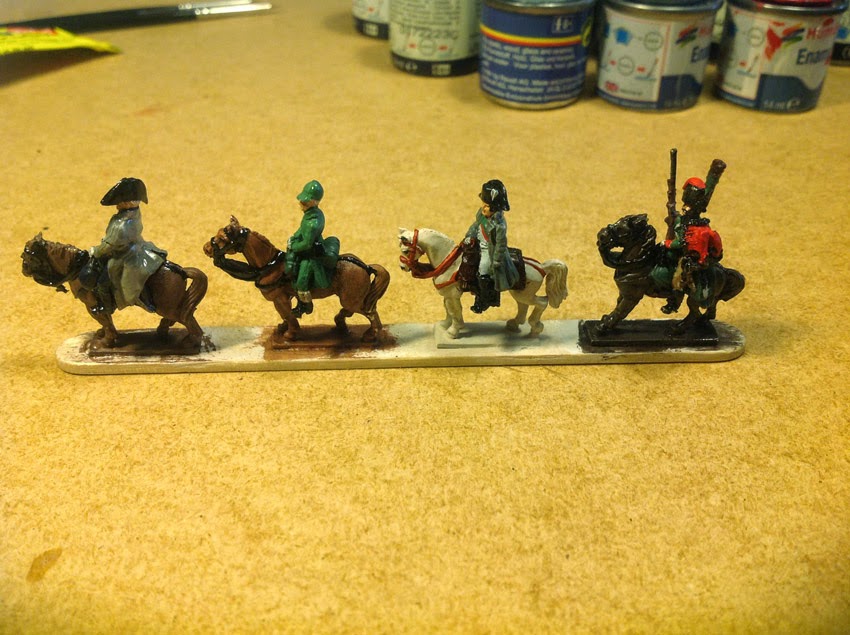 I eventually decided to remount the figures individually, as the paint was rubbing off in various places when I was working with multiple figures glued to lolly sticks. I've re-based them, using UHU, on wine bottle corks, cut into two or three pieces. This means each mini can now be handled separately, and will hopefully therefore require less of the repeated touching up I was doing before.

They're such gorgeous figures they really do deserve the individual approach! 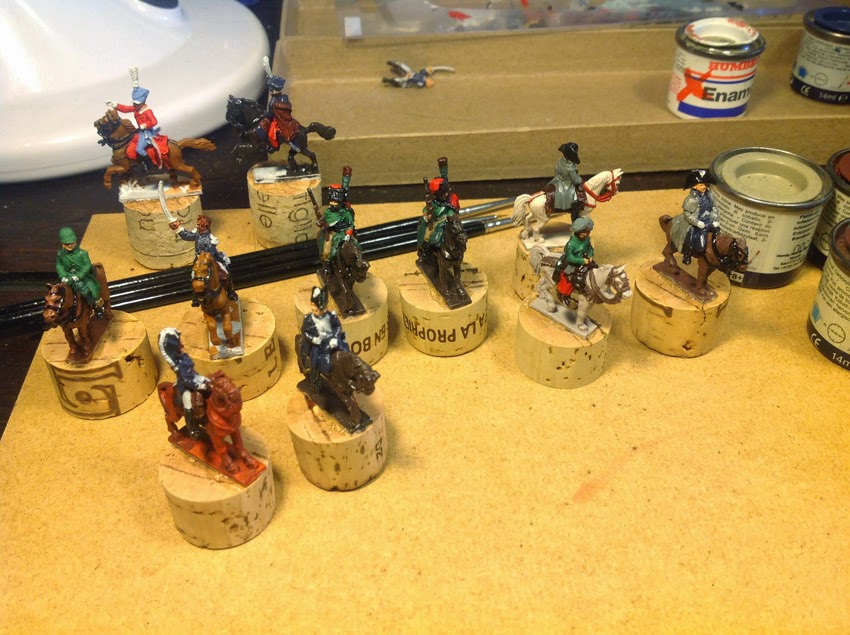