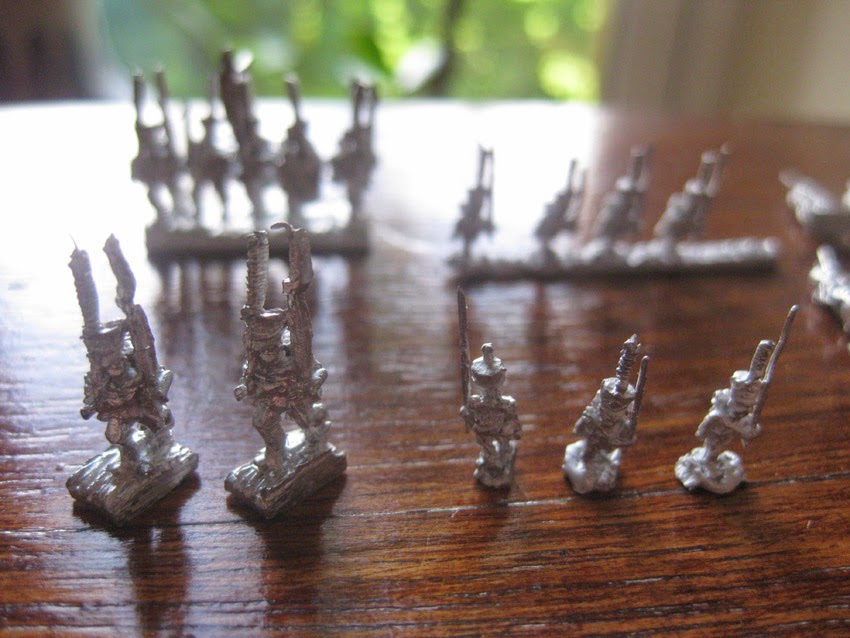 This post is in response to an interesting post on SteveM's blog, which he also posted about on TMP (find the former here), on basing 6mm Adler Napoleonics. Here are a few thoughts of my own, raised by things Steve mentions. 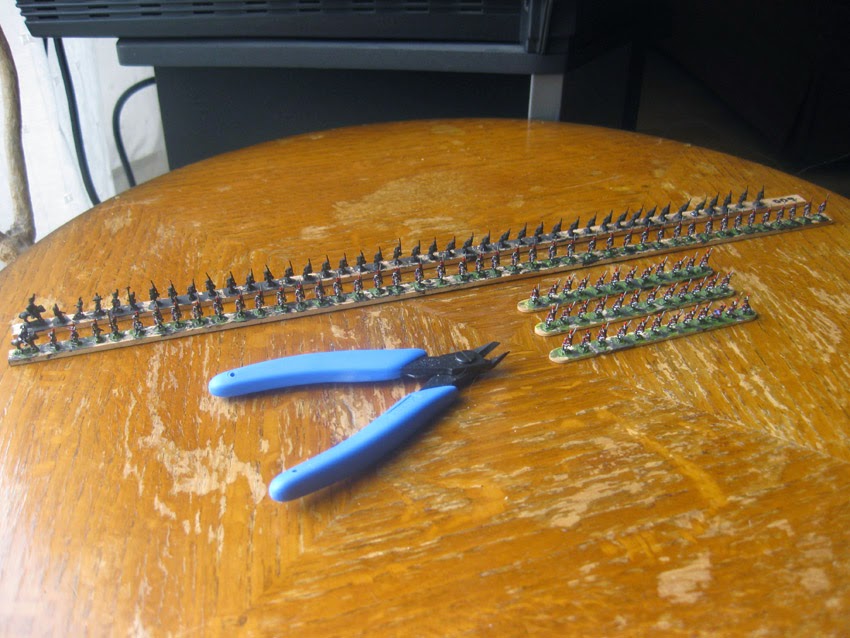 First of all, he and several who responded to his post, mention that they separate their Adler figures, which are supplied in strips. They, or at least Steve (in his tutorial) separate them after painting. I separate mine before, as the pics included here illustrate. I can be seen, I hope, that they are glued to the wooden strips/lolly sticks, having already been separated. Then undercoated, painted, etc.

Part way through his basing tutorial Steve says this: 'The only gripe I have about Adler figures is that the bottom of the figure is not very level and needs to be made level...' On the TMP forum Leon Adler, i.e. the guy who makes these marvellous minis, replies to this (and also on the topics of separating figures and substitution of flag-poles), with his views. I'll try and keep out of that debate, I think! 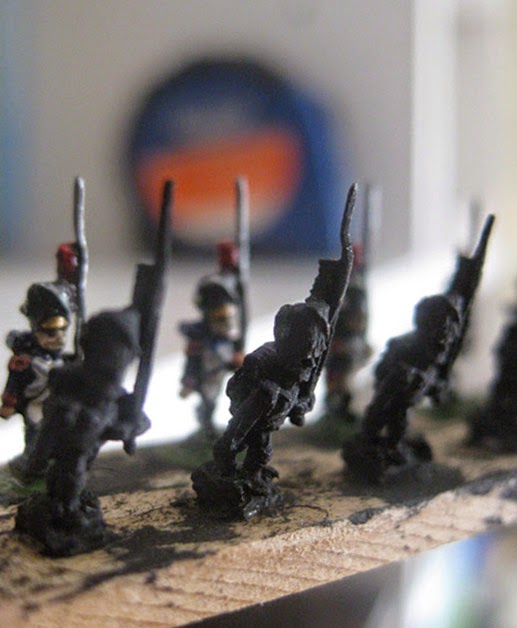 The first thing I'd like to say tho', is that I absolutely love Adler 6mm Napoleonics. They form the backbone of my 6mm French and Russian armies for the campaign of 1812. I like Baccus as well, and the two mix well in my view. However, as a collector and connoisseur, or even just as a plain consumer, I've learned that for me I will always want to aim to be both as truthful and critical as I am lavish in my praise. 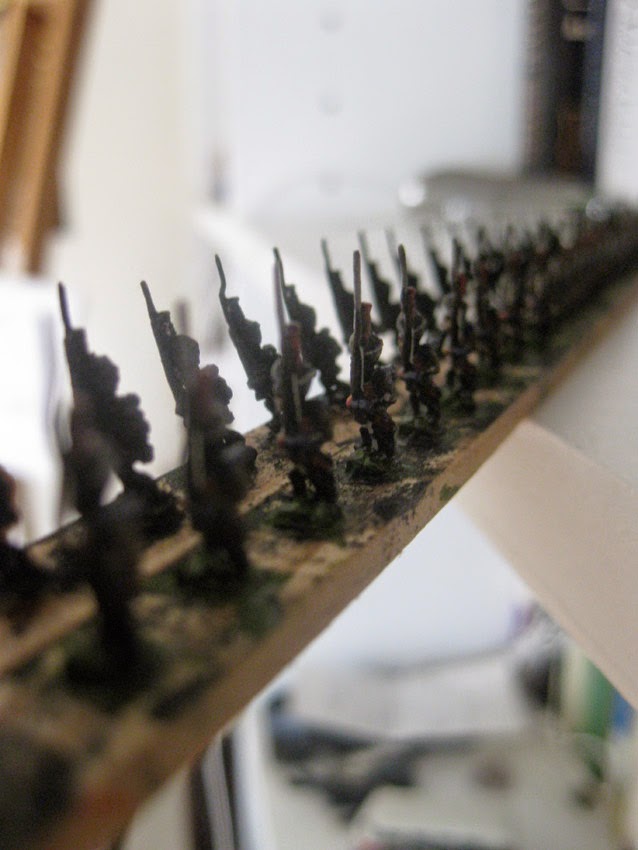 I think the second and third pics in this post amply illustrate the forward lean of some of the OG Chasseurs, whereas the OG Grenadiers are pretty upright. When I was painting several of my Adler units, I was a bit saddened by this pronounced forward-leaning tendency, which was worse with some figures than others. For one thing, it means that when the minis are 'deployed', looking down from above at the back of them is great, but looking down from the front, you don't always see all the detail - facings, cross-straps, etc. - you've lovingly painted.

I would never want to put anyone off buying Adler, as I love them. But if Leon ever remoulds any of these lines (and I know from reading TMP and other sources that ranges do get rejigged from time to time), then I hope he might looks at the bases carefully, and, where necessary, make sure that this isn't an issue in future castings. 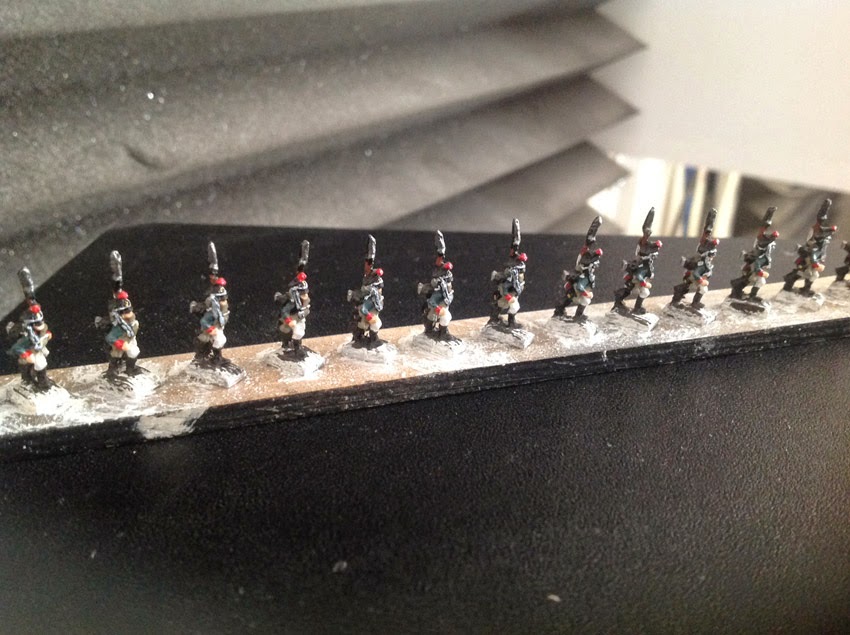 As a kind of PS, I also separated a large amount of Old Glory 10mm figures, which also came in strips. I did this some time ago now, when I bought my first armies, in both 6mm and 10mm, for Russia 1812. And I did so... with a hacksaw! (Btw, this was before I got the snips.) I had to mount the figures, wedged in layers of foam, in a vice!! Those figures, as the pic above shows, had really quite thick 'n' chunky bases! But I felt I could neither paint nor base the figs to my satisfaction as supplied. They're really very close, as can - just about - be seen in the command strip in the top image of this post..
Posted by Seb Palmer at 14:51