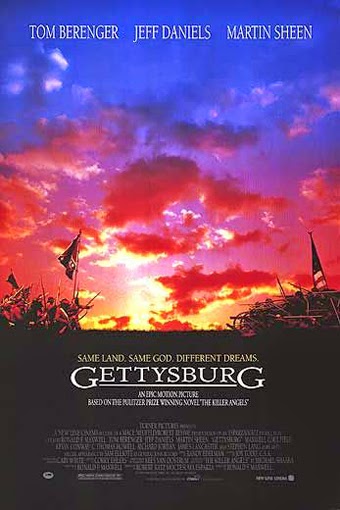 Having recently made a small digression, a flanking manouevre, perhaps, into ACW territory, with my post about the National Geographic ACW 100th anniversary series, I feel inclined to follow it up with a review of (or if not quite a review, then thoughts arising from watching) the Gettysburg movie.

My return to things ACW was begun with a purchase of Ken Burns' utterly magnificent epic documentary The Civil War. After watching this superb series I started adding ACW titles to our Lovefilm queue. We started with Glory, in which Matthew Broderick is a touch unconvincing (there's an irony here, in that the character he portrays was beset by self doubt) as Col. Robert Gould Shaw, a white officer tasked with leading the first black infantry regiment - the 54th Massachusetts Volunteers - into the fray.

Then Lincoln came out, so we saw that at the cinema. Shortly thereafter - and I mean very shortly, i.e. immediately - I decided the time was ripe to watch The Civil War series again. After this second viewing I felt it was high time I overcame my aversion to the very obviously fake beards that had formerly put me off giving Gettysburg a punt. One of the chief reasons being that I fancied the actions of Little Round Top and Pickett's charge, both of which are so stirringly covered in the Burns' doc., would be certain to feature. 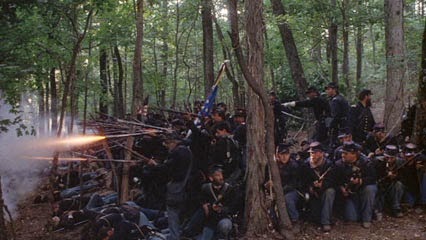 The 'hinge' of Chamberlain's fateful, decisive (and possibly legendary, in the mythical sense) 'gate', on Little Round Top.

When I did finally get the discs from Lovefilm, I initially failed to twig that it was a two-disc affair, or that both discs had been, unusually in my Lovefilm experience thus far, sent together (this remains, at present, the first and only time this has happend). The upshot was that I hoiked out disc two first, and watched that. It was good, but I really felt like something was missing! Only when I returned the disc to its wallet, intending to return it, did I see the other disc, and realise I'd goofed. So, I started again, this time with disc one. Unsurprisingly it was a far more satisfying viewing experience!

Having finally watched Gettysburg, in which my hopes were rewarded, in that Little around Top and Pickett's charge are not only covered, but are the two central features of discs one and two respectively, I realised it was high time I watched The Civil War again. And after that I felt I was ready for just one more viewing of Gettysburg, before returning the discs. The ACW bug had bitten deep! 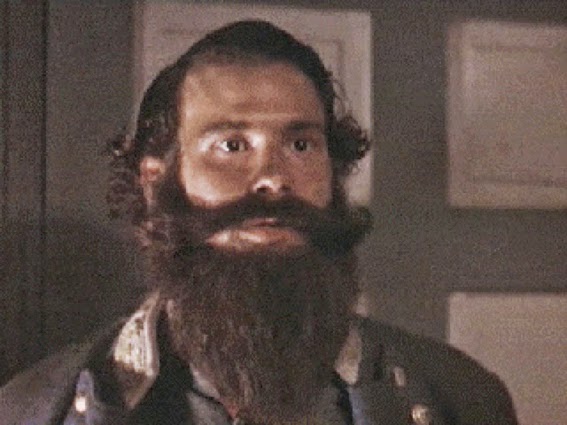 'If'n all a maw hayer turns white, wall, reckon I kin get me a job as Santy Claws...'

One thing I've gotten into a habit of doing with quite a lot of the books and DVDs and other sundry stuf I read, watch (or whatever), is posting reviews on Amazon UK about them. This is partly a by-product of having written a classic album column for Drummer magazine for over a decade, which allowed me to develop the penchant I already had for writing about stuff I like, into something of a paid hobby. I also find that keeping notes on stuff as I watch or read, and then writing a review when I finish, helps me focus my thoughts, and thereby remember more about the book, film, or whatever it may be.

When I posted a review of Gettysburg I was kind of not surprised to find the movie getting something of a panning, for numerous reasons, the most obvious being the most obvious-ness of much of the chinwiggery (my predictive text function doesn't like me minting this new term, and suggests 'chinwag grey'!): Gettysburg was clearly a big budget enterprise, and it wouldn't surprise me to find that the GDP of a small developing nation was expended on fake beards and moustaches. 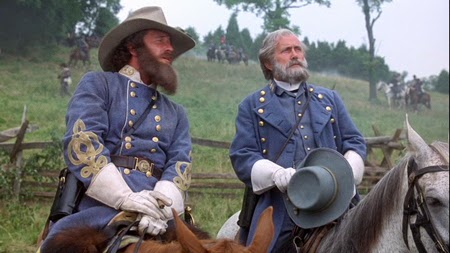 'Don't shoot me. I'm only the beard!'[1] Berenger as Longstreet, and Sheen as Lee. Thinks a passing Johnny Reb grunt: 'I do declayuh, them thar southen gennel'men, they sho' knowed how to dress.'

I feel tempted to say 'I've seen it done better', but when I think about it, one can usually spot false beards, 'taches, mutton-chops and the like, quite easily. I think Ian McKellen did a sterling job as Gandalf (tho' I have a soft spot for Sir Michael 'Paddington Bear' Hordern in the role, and even dig the fabulously named Heron Carvic in Ye Olde BBC radio verison of The Hobbit version) - and it, meaning his beard, etc., probably was done better - but I could still see it was fake, and that did occasionally niggle.

The problem facing the make-up dept. on Gettysburg was that there were almost as many acres of facial hair to be prepared for every shoot as there is wheat in all the massive monoculture cash crops of the entire US of A today. I mean, this was, after all, the conflict that gave us - so I've been read - the term 'sideburns', in honour of Ambrose Burnside, who, as can be seen below sported admirable, one could almost say 'benchmark', examples. As well as being a general in the Union army, and gifting us this new word for the face-fuzz lexicon, ol' Burnside was also the first president of the NRA! 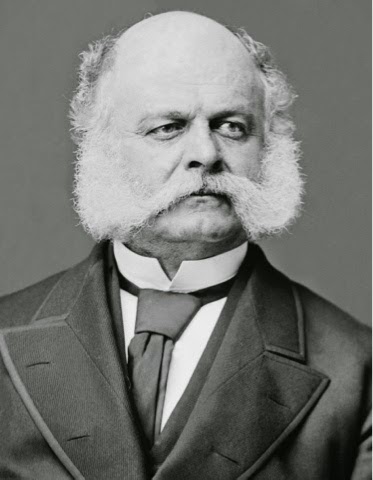 Burnside, egg-headed 1st president of the NRA and the original Mr Sideburns!

Actually, when they show the characters, as they do during the titles for the movie, placing actors in make up against vintage photos of the original protagonists, you realise that it's not just that the fake beards and suchlike look a bit ridiculous, but that the real McCoy takes some believing in. The Remington fuzz-away was some time off, and these guys, real men's men, appear to have had beards on their whiskers. Anyway, that's probably enough about the beards and whatnot. 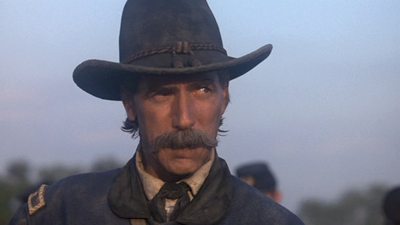 Sam Elliot as Buford, giving one of his trademark looks, a kind of super-distilled semi-crazy intensity. Perfect for a high ranking C19th military type in the field, methinks. Elliot is such an excellent 'lean and rangy' cowboy-type, and - what a bonus - that's a real 'tache!

After a while you get used to it... kind of. Well, that is until Joseph Fuqua makes his belated appearance as Major General 'Jeb' Stuart (see the pic above 'Chinwiggery'). With his his eyes a-goggle, and his wayward whiskers looking like some biblical bush, this funny little Fuqua put me in mind of Michael Palin in some vintage Monty Python or Ripping Yarns type sketch. Was he about to burst out singing 'I'm a Lumberjack'?

Well, strange to say, perhaps, after that long opening ramble through the tangle of nun's hair* and glue that might plausibly constitute 'a world of pain', beard and moustache wise, it might come as a surprise if I do a swift volte face, and say, or confess, even, that I absolutely love this movie. 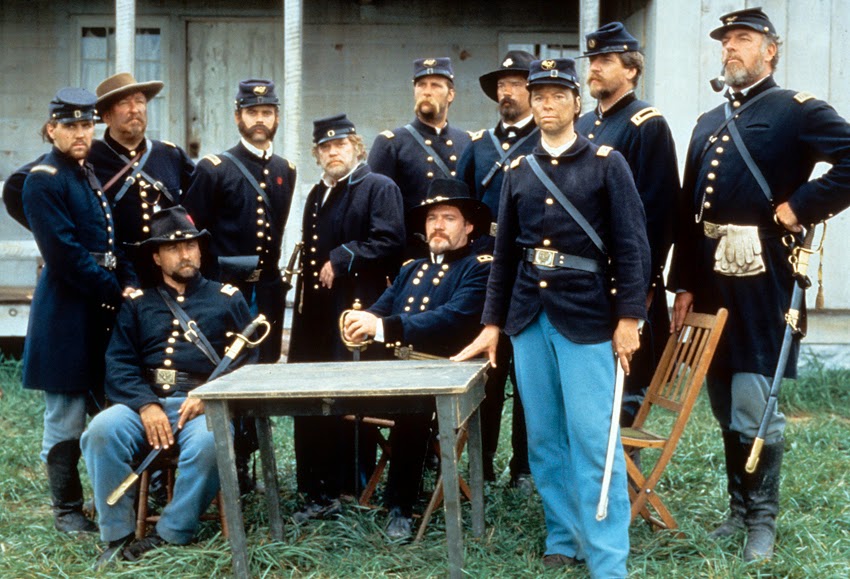 The cast assemble for a Union brass group shot.

Ham & Gravitas, with a side order of Stirring Music.

When I posted my Amazon review on the movie, I'd only watched it once or twice. I've now watched it four times, and I'm halfway through viewing number five. And I like it more with each viewing.

After the first proper viewing, when I managed to start with disc one, it was Jeff Bridges' turn as Col. Joshua Lawrence Chamberlain that sealed the deal for me, as well as the pure martial splendour of so many actors togged up so well, and the sheer pleasure of a double-disc axtravaganza dedicated to nothing more than a famous battle - there's no extraneous love sub-plots, nor even very much time set aside for the worthy themes that are the 'raisin detour' of (or could that be 'excuse for'?) Spielberg's Lincoln.

Indeed, I was so taken with the story of the 'textbook manouevre' by a College professor turned soldier, on Little Round Top, as portrayed in both the Burns doc. and this movie, that I ordered a copy of The Passing Of The Armies, which I'm currently reading (and loving), which is Chamberlain's narrative of the end of the ACW, and the role he and the V Corps, to which he belonged, played in the Appomattox campaign, leading up to the surrender and the end of the war. Chamberlain proves to be clever and articulate, as one hopes a college professor would, but, and better still, witty and independently minded. 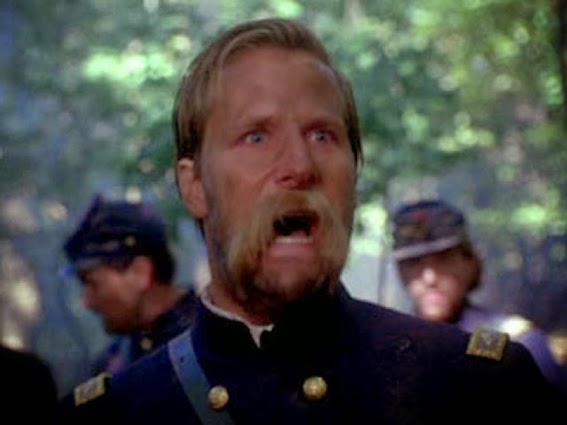 'Chaaaarge!' Bridges' performance as Joshua Lawrence Chamberlain is pitch perfect, at least in terms of stirring drama, if not necessarily strict historical accuracy.

Watching the film again with a fuller insight into the man Bridges portrays only makes me enjoy the film more. Often a better literary understanding of a films sources does the reverse, and rather takes the shine off. Not here. Or at least not for me. I've also grown to appreciate some of the other portrayals more. Tom Berenger is superb as Longstreet, and whilst I initially thought Martin Sheen was the movies big casting mistake, as Robert E. Lee, the more I watch this, the better I think his performance is. Again, this can often be the reverse, esp. with modern mainstream films, especially of the Hollywood blockbuster type, where any initial charm (or indeed any recollection of anything at all about it) quickly fades. 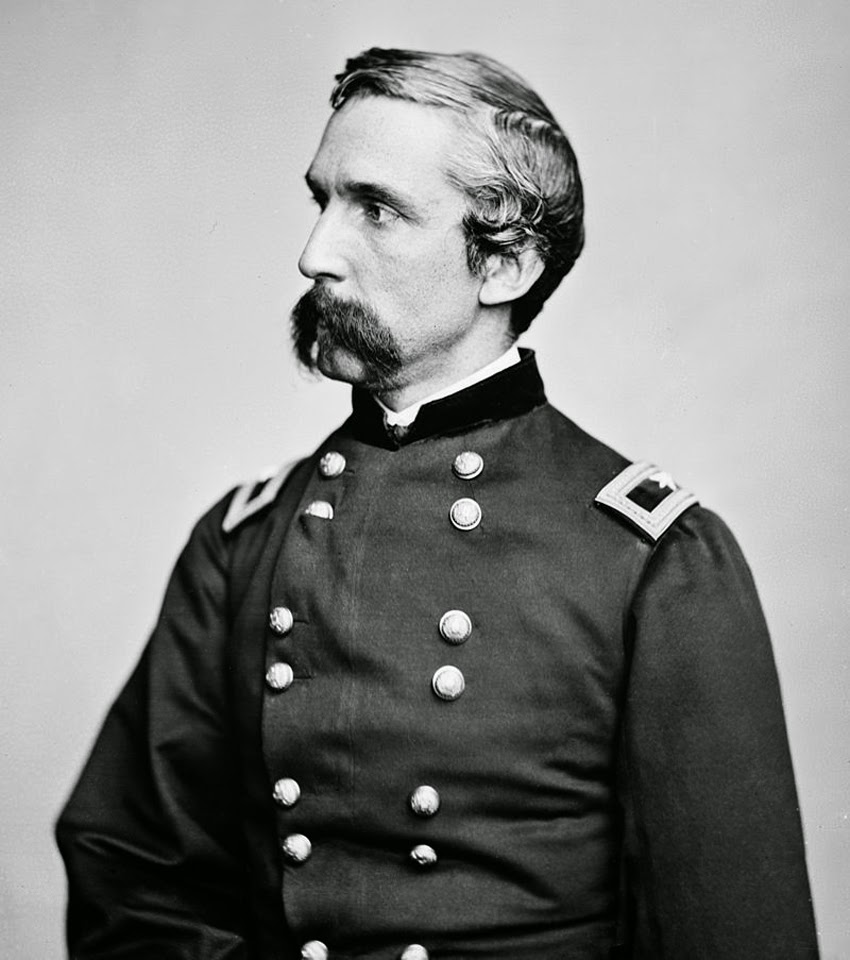 Reading Chamberlains memoirs of the Appomattox campaign ought to help any wargamer, or other student of military history, realise what a Godawful chaotic mess war generally is, and both Sheen's Lee and Berenger's Longstreet (and numerous others, as a matter of fact) do great jobs of showing how commanders have to work with unfolding events that aren't going quite as they'd like them to.

Right, well, time for bed now. This review is a work in progress by the way! I've not said enough about the film itself by half yet, and intend to return to this post, as I return to the film itself, several times, to tweak and develop it.

If or when I start collecting ACW miniatures, I'm pretty certain I'll want a little JLC figure. I'm aware of several out there: a W Britains 54mm old-fashioned 'toy soldier' type, a 40mm from figure from an American firm, and a 28mm figure that was, I believe, the free figure at a show like Salute some time back.

* Some years ago, as a poverty stricken longhair contemplating lopping off my locks, I had the brainwave of selling my abundant and perfectly straight sheafs of golden tresses to a wig maker. I was surprised to hear that when it comes to the supply of human hair, Huns... sorry, nuns (ah me, predictive text, you gotta love it!) had long ago cornered the wig market. Now, I thought I was being taken for a simple country lad, for such I am I guess, when told of the Burnside sideburns switcheroo thing. This nun-wiggery business sounded even more like I was having me lanyard yanked. I've never bothered to investigate, but I like the yarn!

[1] A quote (or possibly a slight misquote) from Woody Allen's wonderful movie Broadway Danny Rose.
Posted by Seb Palmer at 22:43