At present I'm simply not getting time to paint. But my voracious reading continues apace. I habitually keep notes, and I also find that writing reviews helps me focus on the books I'm reading, and hopefully both draw out what I want from them, and, perhaps, remember it all a bit better. In the past I would often post the resulting reviews on Amazon UK. I'm thinking I might transfer that habit over here, instead (or as well). I hope these reviews might be of use to those interested in such things!

Before I commence with the book review, however, a quick aside: this is, I believe, my 33rd post on this ear blog. 33 is a nice number: it looks nice, and, thinking of the title if this blog, it's an oft-favoured figure ratio (1:33), and it's (almost) the speed at which ye olde vinyl albums rotate. Following on from that music related thought, it's also as far as I got - 33 posts - with my previous blog sounds from the funky goat! That is, or rather at present was, a music-focussed affair, which I hope one day to return to, as I grew a little band of followers, and music remains a passionate area of both interest and activity for me. 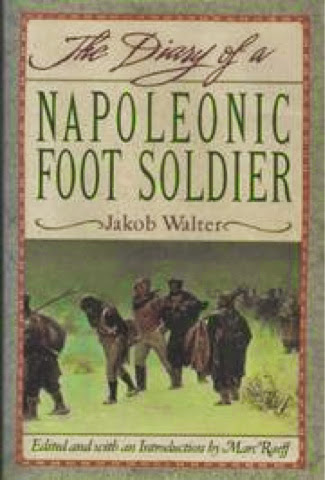 Walter Jakob's Napoleonic diaries are very short and easy to read. I read this immediately on receiving it, today, in a single sitting of a coupe of hours. They're neither the best written, nor the most informative, but they are both illuminating and important in that they are one of the only known accounts from a private, the lowest rank in the army, serving under Napoleon. 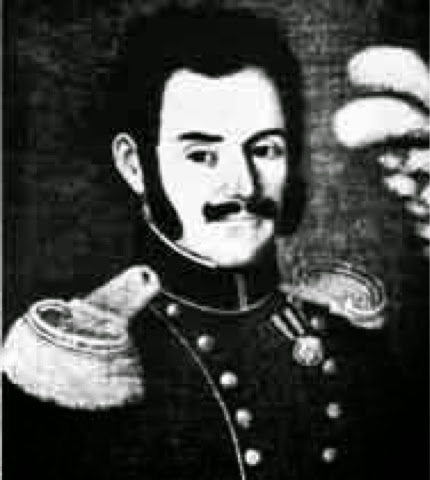 It struck me when looking at the illustrated works of Faber du Faur and Albrecht Adam that most of a Napoleonic soldier's life seemed to comprise of marching and bivouacking. One particular aspect of this, very forcibly brought home in Jakob's account (and many others, especially of the Russian campaign of 1812), is the element of foraging. A large proportion of this account is about the struggle for subsistence, especially on the way out of - but even on the way into, as well - Russia.
It's more usually the memoirs of soldiers of officer and general rank that get quoted, the Bourgognes and Segurs, so to hear from one of those editor Marc Raeff refers to as the 'suffering faceless common people' is a refreshing change of perspective. Raeff is actually describing the authors of six letters written by Westphalians serving under Napoleon in 1812 when he says this, which are included here as an interesting footnote or appendix type addition.

I haven't read Raeff's introduction yet, nor Frank E. Melvins 'historical commentary'. I just dived straight into Walter's account. He fought for Boney in 1806-7, in eastern Prussia mostly, and then during the 1809 campaign against Austria. In between times, he worked as a stonemason - which leads him to make certain professional observations on some of the buildings in some of the towns he passes through - into which trade he had returned before being recalled in late 1811 for the great Russian debacle. 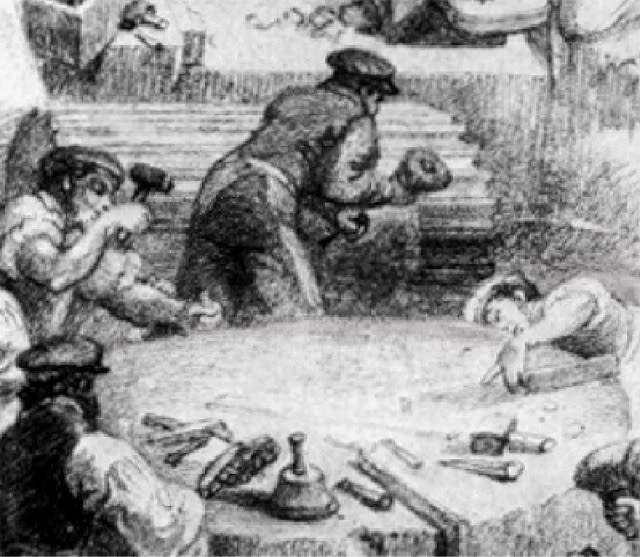 When he wasn't worrying where his next meal was coming from whilst marching under Napoleon, Walter was a mason. We know he was a stone mason, whether he was a free-mason... I don't know!

He was a conscript, not a volunteer, and German, not French, but, whilst he doesn't have the Bonapartist fervour some French memoirists display, he never seems to have wanted to desert. A slightly superstitious Catholic, he's not quite the Lothario that the dashing duelling cavalryman Parquin is, but he does, at one point, lie to a nun he seems rather taken with. I have heard of Walter several times, when reading histories of 1812, most recently in a book about how typhus ravaged the Grande Armée. That books author maintained that the fever Walter complains of near the end of his account was most likely typhus.

My favourite memoirs seem to be by the middle rankers, like Bourgogne and Parquin, whose mix of eloquence and charming candour are perfect. The top brass can be too self-conscious, and often try to be overly thorough - the much lionised Clausewitz wrote what I think is, for the most part, an almost unreadably turgid account of the 1812 campaign - whilst accounts from the lower ranks are often very circumscribed, and can often read as rather naïeve. 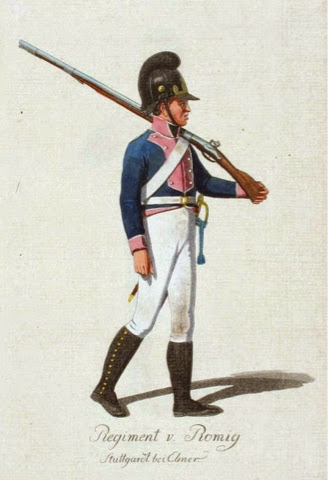 According to Wikipedia, Walter was conscripted into the Von Romig regiment, as illustrated here by Ebner.

Still, the more the better, as far as I'm concerned; this is yet another of the many accounts of this epic campaign that I'm so glad to have both added to my ever-growing 1812 library, and read. Not the best, yet still full of humanity and pathos, and definitely worth reading.

Two maps are included, practically as end-papers; they have nice local German detail at the western end, at the front of the book, and near the back show the eastern end, and turning point. Whilst not sufficiently detailed to show all of Walter's stops, they allow one to follow his general movements, and as such are perfectly adequate. In the body of the text some place names are rendered somewhat unusually, but I think Raeff says this a deliberate attempt to help keep the flavour of the original text. 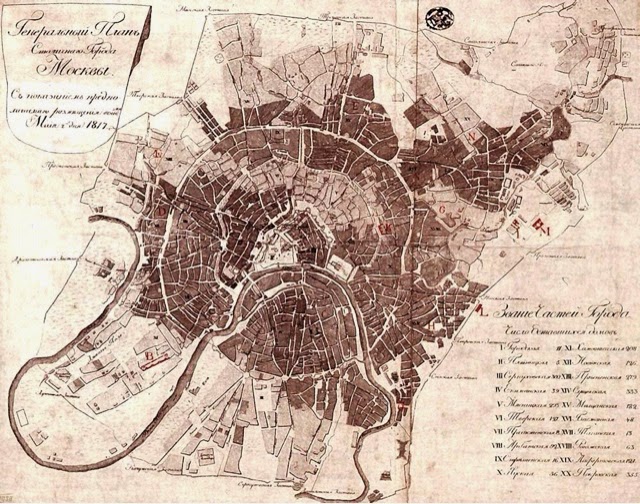 This near contemporary Russian map shows the extent and degree of fire damage in Moscow. Not the exact image used in this edition, but the same map, I believe.

As well the intro and historical commentary, there are also the six Westphalian letters, and in addition to all this, the text is illustrated with a number of atmosphere setting artworks, reproduced as rather small black and white images, most of which 1812 diehards will have seen before (many being by Faber du Faur), but some of which might be new, such as the images of Cossacks force-feeding Boney-in-a-barrel, and a very interesting Russian map of Moscow from 1813, showing the extent of the damage the fires had wreaked (above).

I got my rather handsome hardback of Waletr's memoirs for just £2.81 on Amazon UK. Less than the cost of a beer, and, to my mind, more stimulating and nourishing!
Posted by Seb Palmer at 22:27