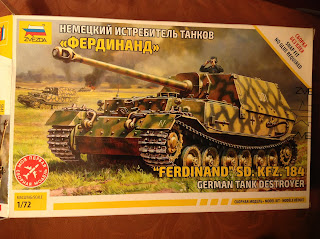 I think this is my second Zvezda snap-fit kit. And as with the last one (an early-production Tiger I), I chose to glue it all together anyway.

Personally I think these are brilliant kits. The design work that goes into making a kit work without glue also happens to make for a better kit build even when you do use glue: parts have to be designed to fit properly, and many - well, all, in fact - benefit from 'male/female' attachments, which ensure a good fit, and stop parts from moving.

Having said this, it still falls short of perfection. Or at least my rendition of it does! There are some gaps in places. And some parts can be attached slightly out of their proper alignment in spite of the thorough design. 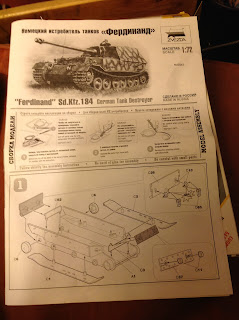 The instructions are pretty good. And certainly loads better than those for the ICM Krupp Protze that was my previous build. And whereas that build was begun months back (perhaps even over a year ago?), this time I started and finished assembly the same day. Very gratifying! And highly enjoyable.

The Sd. Kfz. 184, also known as the Ferdinand, and - I think? - the Elefant, is one of my favourite WWII German armoured vehicles. It's such a hefty mean looking mother! Those huge rivets/studs, the big boxy casemate, and the whopping great ball-joint mounted gun. 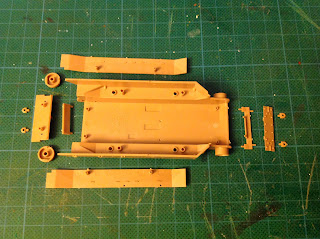 Assembly begins with the chassis. 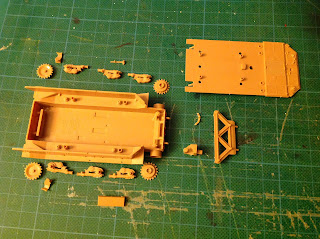 To facilitate snap-fit there are internal 'framing' parts. 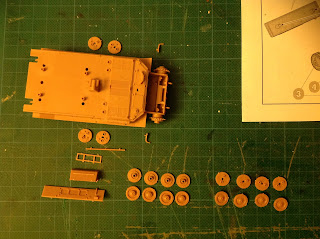 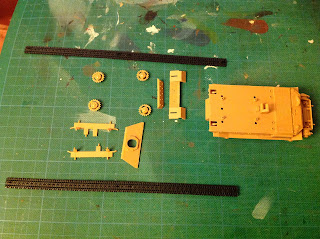 The design of the tracks, how they clip in place, is brilliant.

Whilst the design of the tracks, which clip onto the wheels in certain places, is brilliant, they are quite fragile. Whilst determining the correct orientation - they only work one way round (which is a good idea) - one of them nearly snapped as I bent it around the idler wheel. 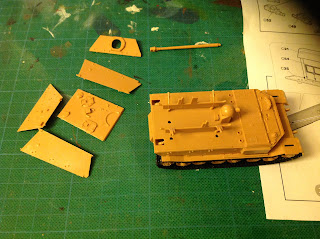 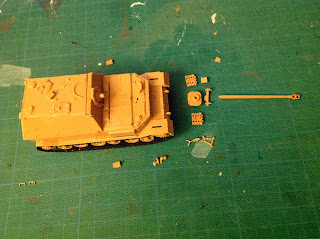 The gun and some body detailing.

After ages of inactivity on the model-making and figure painting fronts, it's nice to be getting back in the saddle. And the two models I've returned to. The ICM Krupp Protze, and this, are particularly good kits, making the return to gluing even more fun and rewarding. 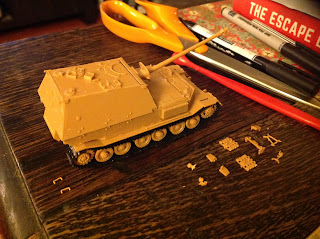 Gun in place. Sundry bits to add to the body. 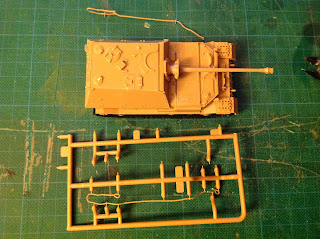 These tow-ropes are very thin and delicate...

One thing this and the previous ICM build have in common is the presence of some very finely detailed and therefore fragile parts. 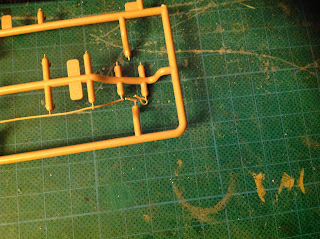 I built a 1/76 version of this vehicle - the Fujimi Elefant - many moons back. And I have a Trumpeter 1/72 version on my pending pile as well. That'll give me a unit of three, which is great. I think I either want a fourth, or else I might attempt - with ye Trumpeter, perhaps? - to convert it a bit, so as to have some open hatches and visible crew.

Anyway, all told, a fantastic model of a fascinating vehicle. 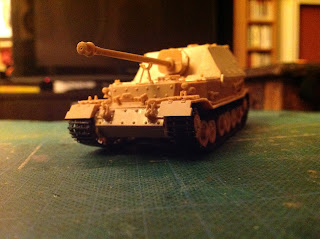 Done! Thought I'd take these pics at 'ground level'... 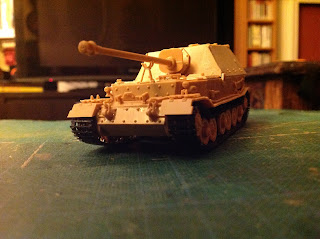 ... as It helps give a sense of the gigantic scale of these armoured beasts. 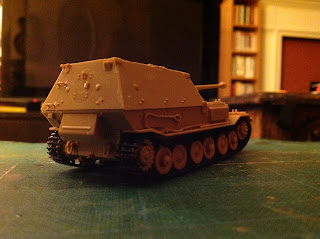 Zimmerit detailing would've have been nice...

I added Miliput zimmerit to the Fujimi model, because almost all photos of these beasts appear to sport that distinctive textured anti-magnetic flesh finish. Doing that on this assembled kit would probably be a bit too fiddly, what with having to work around the stuff attached to the body. Hmmm? I could - as I did at the rear of the Fujimi Elefant - use the heated implement technique, and work directly into the styrene. But I don't want to wreck a beautiful model. Bit of a poser, this one... as in what to do!? 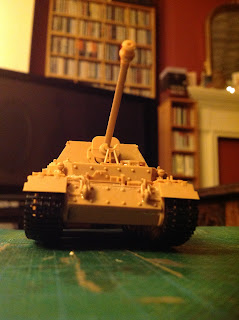 A great angle! You can see why it was also called Elefant! 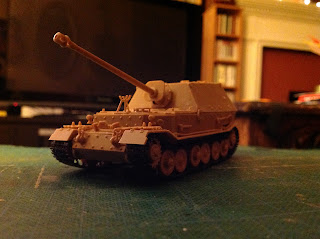 Phwoar... what a monster!

I'm very tempted to search out and buy a book dedicated to this terrific tank hunter. But I think instead I'll try to restrain myself (I have my annual freelancer's tax bill and accountant's fee, plus sundry other expenses to meet), and instead scour the interweb for ref.* I may even add a new segment to this post, composed of the fruits of that research. The Bundesarchiv is always a great resource...

* There are lots of great pics of this beast here
Posted by Seb Palmer at 08:59