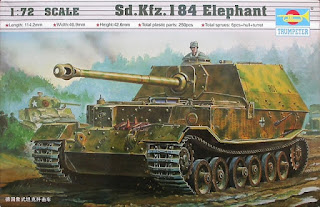 My original plan for today was to visit Bovington Tank Museum and see the Tiger collection, and in particular the Elefant. But my car hasn't played ball with me.

So instead I'm starting in Elefant #3 today. Although in truth I started a couple of days ago, trying to replicate the front driver hatch, etc. I tried to reproduce the hatches using white Miliput, by pressing the part into some, letting that dry, and then pressing some more Milliput into that: sort of taking an impression, then working from that. That took two days - hard to be so patient! And in the end it didn't really work. Or at least not well enough for me to go that route. 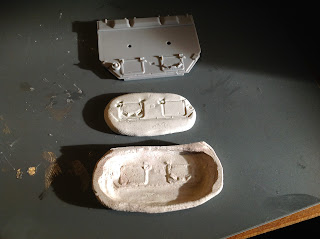 Instead I decided to try and cut out the actual hatch moulded on to the model. I had hoped to have both the driver and the radio operator hatches open. But this was such hard work I only did the radio  op's hatch in the end. But this has at least worked much better. I was able to keep certain details, like the hinges, by working carefully around some parts, whilst taking other bits off with a scalpel, and re-attaching them later, and leaving some in situ. 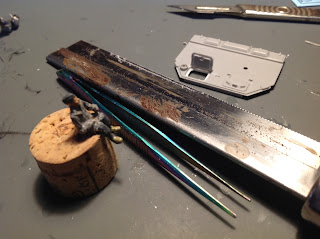 Hatch in place, I prepare the radio operator for surgery... no anaesthetic! 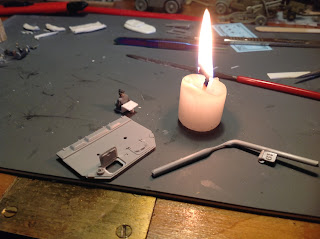 Crewman has a seat, and I stretch sprue for handles.

I also constructed an inner 'lip', inside the opening created by (very carefully!) cutting out the hatch itself, which the hatch would rest on when closed. And using candle-stretched sprue I made two little latch handle points on the inner or underside of the hatch. I tried stretching some more sprue even thinner, to make the actual handhold parts of the handle, but couldn't get the styrene I'm using to stretch finely enough, for some reason. 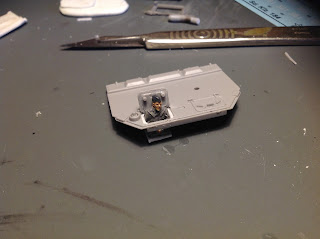 Ta-dah. Funkmeister in his proper place. [1]

I think the figure is a Milicast resin chap. I hade to remove his left hand, his legs, from mid-thigh down, and shave his arms a bit at the sides, to get him to fit. I only hope there's nothing in the base of the chassis to cause grief later on? I'm pleased with the outcome. I just would like to have the driver's hatch up as well. Hmmm... should I? I don't want to wreck either what I've already done, or the other more fancy hatch, with its triple periscope arrangement.
---------- 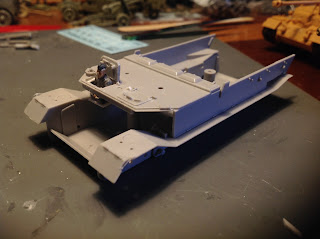 Not glued yet, just wanted to see...

I diverged from the recommended order of assembly a little, in order to see the radio man in situ (albeit not glued in place yet), just 'cause I wanted to be sure the figure would fit. But then I got back on track. And, like many AFV models, this one starts with the running gear. In my recent Krupp Protze build it was the delicate suspension that wowed. Here it's the unusual (and often faulty in the field) three part longitudinal suspension bits. 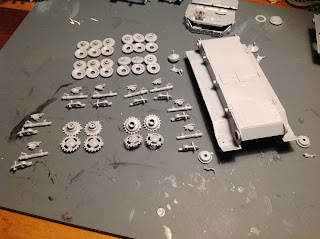 Getting all the running gear ready to assemble. 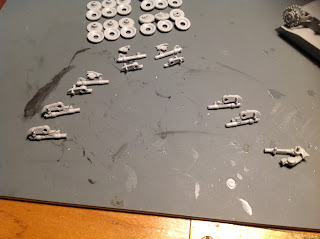 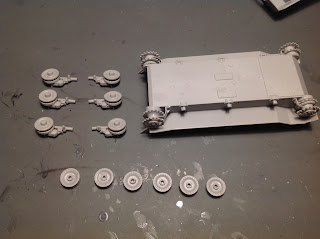 Starting to get the wheels onto the suspension. 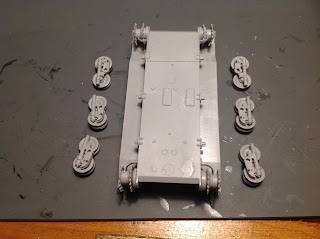 Ready to go in the chassis.

So I got the wheels and suspension assembled and on the chassis. The detailing is very nice and crisp. Sadly there's a fair bit of flash to be removed. I think that's me done for this evening. I got my car back from the garage, and it seems to be in order again. So I've rearranged tomorrow's lessons for Thursday, in order to get down to Bovington and see the Elefant. I'm determined! I'll finish today's post with a couple more period pics, this time of wrecked vehicles. 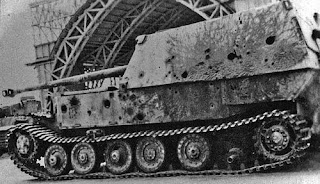 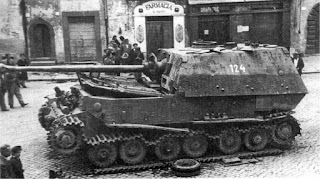 [1] In my musical side of life I'm a bit of a funk-head, amongst other things, and I love that the German for radio is 'funk', as in funkwagen, etc.
Posted by Seb Palmer at 20:39