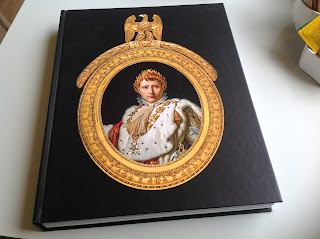 Wow! What a sumptuous feast for the senses. This is a terrifically beautiful book. This edition - I wonder if others will be published, e.g. when the show gets to the Palace of Fontainebleau? - bears the imprimature of Canada's Montreal Museum of Fine Arts. 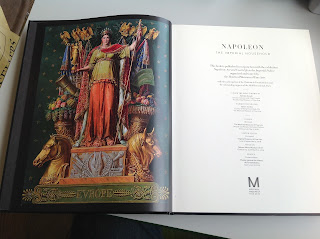 A personification of Europe, French Eagles crowning the backdrop.

I had them set aside a copy for me at Topping Books, intending to go in and buy it yesterday. But worries about the cost resulted in my not going till today. I got up earlier than normal, to be first at the bank, paying in some drum lesson fees (and thereby mitigating feelings of guilt re expense!), and was in Ely nice and early. A quick browse of the book at the counter, and I bought it, paying the full £40 RRP.

Now I'm poring over it at the Widgeon cafe, at Welney WWT, with a pot of tea and a bacon bap. Must keep any bacon grease of this sumptuous and expensive thing of beauty! I'm sharing a few pictures of spreads from the book for educational purposes, in the hope some others visiting and reading here might be inspired to buy the book, and/or visit the exhibition. 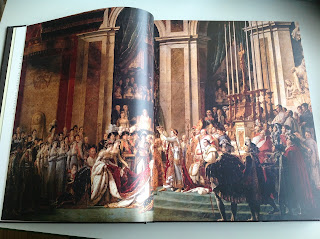 Sadly, for us Brits, the show won't be coming to England, as far as I know. It has the stops on across t'other side of the pond, in Canada and the U.S. and then head to France, later in 2019. I intend to visit the show!

It's funny, in years past my interest in all things Napoleonic was chiefly confined to the military history aspect. Mostly it was all about reading books, plus some perusing of art, and all of this as a kind of adjunct to the toy soldier collection. Now, however, I'm interested in far more: the person of Napoleon himself, and his allies and enemy's. The general tenor of the times, and how they've fed into subsequent history, and so on. 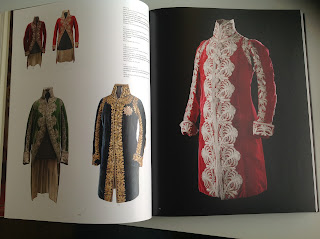 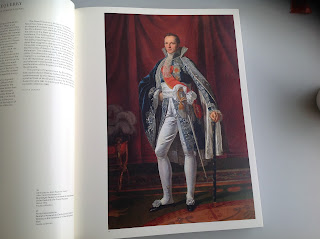 
Indeed, I've had flights of fancy wherein I fantasised about returning to higher education and studying the era in greater depth. I even had one particular dream which involved a PhD on the visual culture of the 1er Empire, the end product of which was to be something very like this book, drawing together such diverse elements as art, architecture, design, and all that jazz.

But here it is, already realised by a team of experts, in my eager and excited hands. An absolute treasure trove of beautifully photographed artefacts, ranging from designs for buildings, porcelain, tapestries, uniforms, and suchlike, to the things themselves. And ranging from small metal baubles to chairs, furniture, carriages, all the way up to palaces. 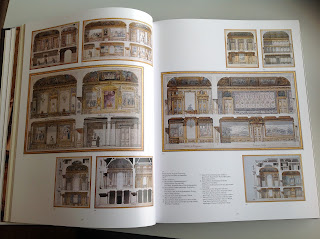 From design sketches and plans... 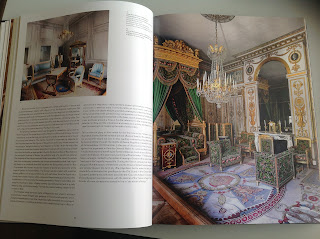 Subtitled The Imperial Household, the chapters are broken down thus:

Within these chapters there are numerous sub-sections, sometimes on a particular theme, individual, or area of production. So for example we have entries on Denon, Sevres, Gobelins, the Empress and her Household, the Imperial Hunt, and so on. 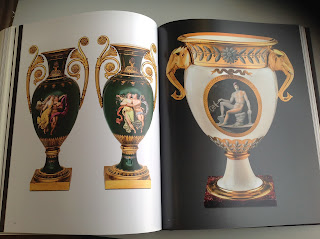 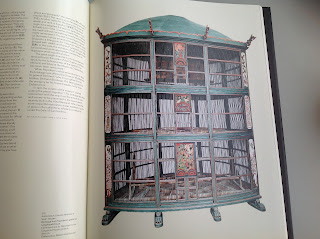 The richness and splendour that is a central theme throughout really is quite overpowering. No doubt just as was intended. In relation to the use of grandeur in power, there's a very interesting juxtaposition on one page of four portraits, in which the contrast between the humble and homely Benjamin Franklin and Napoleon is really very striking. The former is far from flattered by any complimentary idealisation. The latter, in his coronation clobber, is made to conform to neo-classical ideals of regal power and beauty 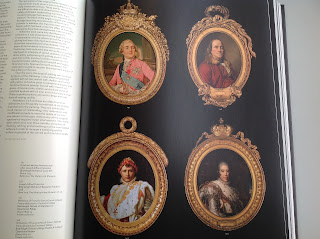 I'm currently reading Inside The Third Reich, by Albert Speer, and it's interesting to compare the longevity of both these fairly recent irruptions of Imperial ambition. Napoleon certainly was, like Hitler, a despot. But it would seem he was a more enlightened one, for all that. And in light of that, perhaps it's not surprising that his Imperial legacy has fared far better, vast amounts of his bequest to history surviving in numerous areas, from bricks and mortar to the Code Napoleon