I had visions of doing loads of modelmaking and figure painting over the Yuletide season. But, predictably, I did precious little. 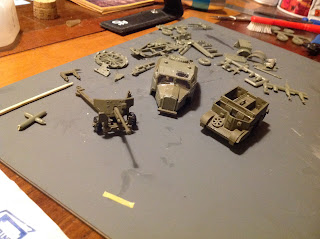 I did start making the Airfix vintage re-releases, starting with the Bren Gun carrier and 6 Pdr Gun. And whilst I've more or less finished assembling those kits, they're not decal'd or fully painted as yet. Nor have I decided about figures for the Universal Carrier.

But I've now finally made a start on kit #2, the Quad and 25 Pdr Gun. This will require some interior painting and glazing, for the Quad artillery tractor. These are one of the few British/Commonwealth vehicles I think look quite cool. There are some in a great Normandy diorama at Duxford IWM's Land Warfare hall. 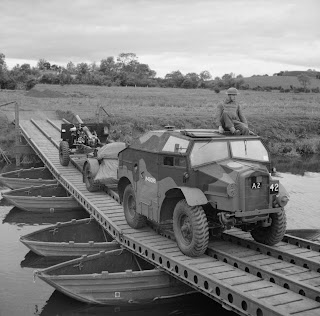 A Morris C8 crosses a pontoon bridge with limber and gun in tow.

Actually, I don't know if the model in this kit is a Morris C8 or a CMT FAT. Or, indeed, if they are one and the same thing!? The CMT was, as far as I know, a Canadian vehicle, made by both Ford and Chevrolet. Was the Morris just an English manufacturers version? They certainly look very alike, at a glance. I guess I'll look into it and try to find out.

Anyway, my modelmaking progress is painfully, nay, depressingly slow. And my figure painting simply non-existent. Hmm... what to do? 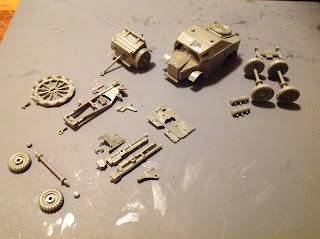 Limber built, Quad glazed, ready to start on the 25 Pdr.

Anyway, for now, at least I'm starting to snatch the odd moment here and there. Not much. But it's a start! And I'm content to lower my build standards just to get stuff done. Plus these old Airfix kits are, without meaning to be rude to such long-serving old-timers, more at the Sow's Ear rather than Silk Purse end of the model making spectrum. 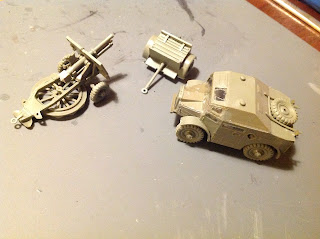 Not sure when I first drafted this post, but this evening - at least one day, poss more, after posting the above - I've now assembled the gun. So Airfix Vintage kit #2 is built. If I have any more, I'll build them, and then set to painting and adding decals. Might do some minimal additional detailing. And I have to decide about whether or not to use the rather clunky figures. But I am gradually getting back into 'gluing', and - best/most important of all - enjoying it.
Posted by Seb Palmer at 22:20