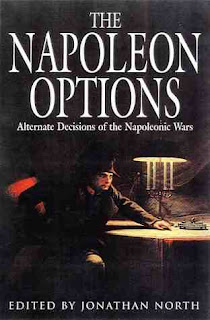 The Napoleon Options is a terrifically enjoyable collection of pseudo-historical 'what-ifs'.

Written by a who's who of Napoleonic history boffins - several well known as wargamers, and almost all of whom will be names very familiar to any true Napoleonic buff - in much the same style as they would write about actual historical events, I found these 'what if?' scenarios, all very plausibly constructed, made for fascinating and highly entertaining reading. [1]

Some of these alternate histories totally reverse events, as when Junot wins at Vimeiro, or Napoleon beats Wellington and Blücher in 1815. Others simply reach the same outcome via different routes, as when Napoleon defeats the Austrians in 1809, or is defeated after a two-day Waterloo. 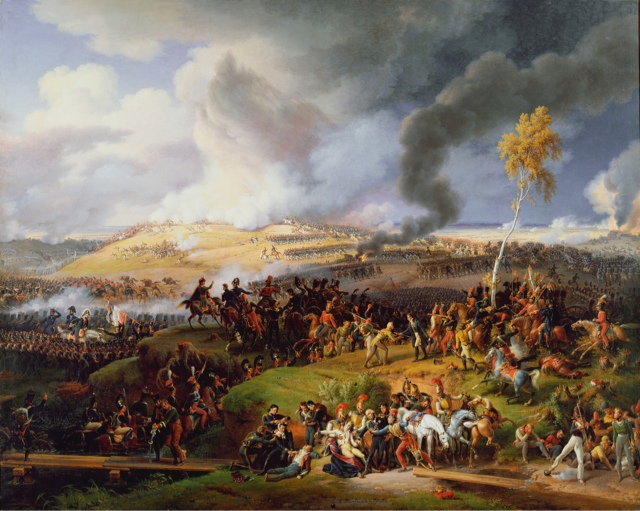 The Russian 1812 period has, for some time now, been my primary area of Napoleonic interest, so I found Digby Smith's alternate Borodino fascinating. Starting, as do all the accounts, from things as they really were, Smith begins changing things by allowing the Russians more forces and greater success in their northern flank attack, in which Platov's Cossacks harassed the French baggage train.

Whilst Smith has Napoleon stave off the worst of disaster that might've resulted in the areas of the field under his stepson Eugene, nevertheless the ultimate stalemate is worse for the French than it was on the actual day.

His account further diverges from real events in that, with heavier French losses, Napoleon chooses to overwinter in Smolensk. And from that point onwards Smith's alternate history takes a very radically different course.

One very intriguing point worthy of note, an aside by Smith described as a 'discordant footnote' to his imaginary history, is his reference to 'The slightly-unbalanced Bonapartist, Pierre d'Offshruere'.

Pierre is the French form of Peter. Smith appears to be having a dig at 'revisionist' historian (as some call him) Peter Hofschröer. Hofschröer is, as it happens, a fellow contributor to this volume, and no stranger to intrigue. The world of Napoleonic literature is, like its subject, a scene of conflict!

Editor Jonathan North contributes a second Russia 1812 piece, telling how Napoleon might've fared had he preserved the base and magazines at Minsk, and soundly thrashed Chichagov's army. This is another of those alternate realities that has very profoundly different outcomes for Europe and the world at large as a result. Very intriguing and entertaining indeed!

John Gallagher, the only contributor whose name I wasn't already acquainted with, offers us an 1813 campaign that, instead of ending with Allied victory at Leipzig, instead finds Napoleonic France re-ascendent, culminating in a second treaty at Tilsit. This was fascinating for me, as the 1813-14 campaigns are one of the areas of this era I'm least familiar with. Discerning fact from fiction was, for me, much harder!

The book ends with three Waterloo related scenarios. Yes, three! Given the epoch-making and epoch-breaking significance of this particular battle that's not altogether surprising, perhaps.

Those who know the other Waterloo related works of Pierre d'Offshruere, um... sorry, Peter Hofschröer, might not be surprised by his 'what if' Waterloo finding Wellington worsted. Like all the scenarios in this book, it's both plausible and fun. Sensitive admirers of Wellington be warned, noses may be put out of joint!

Having struggled with (and thus far failed to finish) his Fields Of Glory, I was somewhat surprised that I found Andrew Uffindell's two-day Waterloo both one of the most convincing and most exciting of these accounts.

On day one Napoleon pushes Wellington back on Waterloo village & the forest of Soignes, momentarily succeeding in his aim of separating the allies.

But, despite Wellington dying on the second day, the Prussians, under the indefatigable Blücher, seal the gap and attack the spent French in ever-increasing force, also bolstered by elements arriving from Wellington's detached force at Hal, to the west.

Not content with killing Wellington, Uffindell also has Napoleon slain, whilst sheltering in a square of the Old Guard, as the Armée du Nord is pulverised. With a welcome touch of humour he refers to revisionist controversies that question the 'Blücher myth'.

The Napoleon Options ends with a chapter by John Elting, the most novel-like, in terms of prose style, of the treatments of these 'captivating scenarios' [2].

Elting imagines that Napoleon not only successfully rallies his shattered forces at Quatre Bras, but then turns the tide on Wellington and Blücher, finally succeeding in his original aim of dividing and defeating them in detail.

One senses a cheeky grin, and perhaps a gleam in Colonel Elting's eye, as his account ends thus: 'Military historians generally agree that Napoleon's post-Waterloo 1815 campaign was possibly the most brilliant of his entire career.' What fun!

I'd thoroughly and unhesitatingly recommend this book to wargamers and any other form of Napoleonic history buffs.

[2] Quoted from the dust jacket blurb.