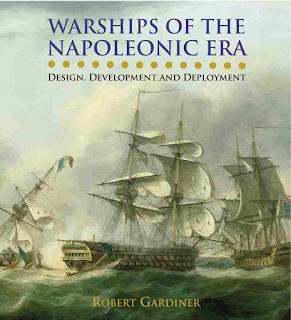 A sumptuous coffee-table feast of images and info from the high tide of the age of sail.

This large format hardback is, like the ships it celebrates and describes, a thing of great beauty.

The book is subtitled Design, Development and Deployment, and one of the chief features it boasts, bearing a clear and direct relation to this rather analytical sounding terminology, is an extensive use of Admiralty 'Draughts'.

These crisp, clean drawings, beautifully done, and very nicely reproduced here, form an extensive and comprehensive record of predominantly British naval vessels. Thanks to British dominance at sea, however, and the numerous captured boats the Navy acquired as a result of this situation, this record actually extends to cover many vessels of foreign origin.

As a Francophile, in terms of my modelling, figure-collecting and gaming, in this era at least, it was disappointing that there wasn't more on the French Navy. But, given Britain's hegemony at sea in this period, and the avowed centrality of the Admiralty draughts to this particular account of the era, that's not so surprising. And the French, Spanish, Dutch, Danish, Portuguese, Swedish, Russian and American Navies are all covered, albeit in much less comprehensive fashion.

In the British section, which accounts for fully two-thirds of the approximately 150 pages of the book, the vessels are treated in several sections, according to the British 'ratings' system, starting with the biggest 'first rate' ships, and working down to the smallest vessels, such as rowed gunboats. 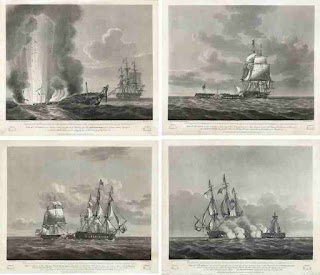 Recurrent themes include how the various classes of fighting vessels evolved, and what uses the different navies made of their various boats. These themes are dealt with pretty comprehensively for the British navy, and more cursorily for the fleets of other nations. But taken as a whole the coverage is very informative, especially for a newcomer to this area of the Napoleonic Wars, such as myself.

From one perspective the Anglo-centrism is good, as it helps avoid undue repetition, and perhaps even makes the book a leaner and yet richer experience. This latter point was brought home to me when I saw another Seaforth title today (Seaforth are the maritime imprint of Pen & Sword, and the publishers of this edition), at Topping Books, of Ely, that dealt exclusively with French naval vessels of roughly the same period, but is more a compendium of info, and is much less richly illustrated. 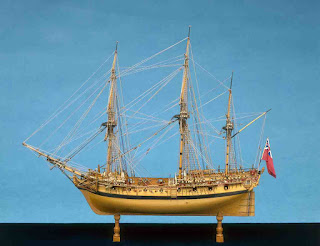 The Atlanta, a 16-gun sloop, from the National Maritime Museum's extensive model collection, a (different) photograph of which can be seen in the book.

Numerous models are shown, and I absolutely love these. In fact I love them so much I'm considering purchasing several more titles, ranging from another by Gardiner (if memory serves it's a history of British frigates, told via models), to the even more plush (and correspondingly more pricey) 17th & 18th Century Model Ships from the Kriegstein Collection.

I've also been inspired to plan some trips, one - very soon, I hope - to the National Maritime Museum, at Greenwich, and another - when time and funds allow - to the Musée Marine in Paris. The former has what may be the worlds largest collection of fine naval models, mostly British, naturally (as they were commissioned for the Admiralty, in relation to their ship-building programme), whilst the latter has a fabulous collection of models of French craft, commissioned by Napoleon himself.

A cropped version of this image appears in a sub-section of this book that looks at the Invasion scares. [3]

One major area of naval concern, for both Britain and France, related to French plans to invade our islands. This is covered, as are numerous other sub-topics, in small supplementary double-page spreads. Other areas addressed include such topics as Speed and Length, Quantity versus Quality, and  Experiments and Innovation, amongst others.

There's also a pair of double-page spreads that, combined, make a four-page spread of one of the Admiralty Draughts - the 74-gun Warrior - allowing a closer inspection. These Draughts are terrific, conveying both beauty and information. I can imagine scratch-builders loving these. I have to confess, landlubber that I am, I mainly admire them aesthetically, and find them hard to decipher, technically. 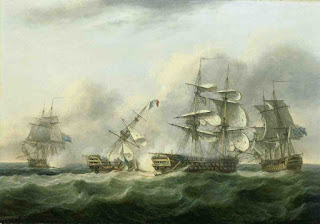 The Capture of the French Guillaume Tell by HMS Foudroyant, off Malta, 1804. [5]

One area where maritime books and other similar stuff on this period regularly falls down, e.g. the Rod Langton Dutch Gunboat model of my previous posts, is the lack of a glossary. Nautical and naval terminology is very specialist, and this book seems to assume prior knowledge on that score.

Still, despite the Anglo-centric bias, and the lack of a glossary, this is a terrifically beautiful and highly informative volume. I paid the full £45 RRP when I bought it at a Wargames show, but I don't regret it!

[1] The largest privately owned ship-works in Europe at the time.

[2] The lower left of this set of four Pocock prints is one of many wonderful artworks reproduced in the book. The image is a rare example of British sea-power worsted, depicting the USS Constitution defeating HMS Java, in 1812.

[3] Described as 'naive but detailed', a cropped version of this image appears in a sub-section of this book that looks at the Invasion scares. The full image benefits from a textual key that augments the visual components.

[4] I found this pic when 'googling' Nelson's 1801 attack on Copenhagen. The image I was after was an oil by Nicholas Pocock. I'm not even 100% sure if this watercolour depicts the same action or not!?

[5] The full painting, by Thomas Luny, a cropped version of which adorns this books cover.