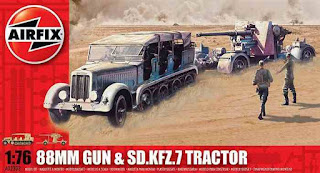 My first model build in ages, I approached this - as I'm largely approaching a lot of my return to military miniature hobbies - like a big kid. Rather than being hung up on perfectionism, I've just snipped and cemented. More or less.

I mention this because it's been striking me forcibly how different it is, despite the much appreciated common factor of simple pleasures, to be doing these things I did as a kid as an adult. On the one hand I have more funds, with which to realise childhood ambitions - or modified versions thereof - but on the other, I'm now a different ('somewhat modified', I guess!?) adult version of my former self. 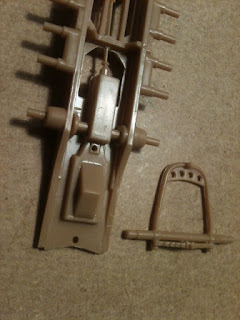 Had to drill an 'ole, for the 'nipple' on't suspension. 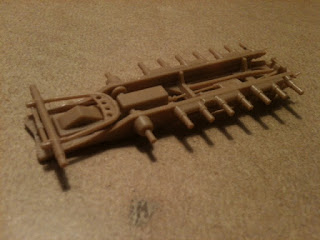 Anyway, putting aside psychological speculations, and picking up snips and cement, I will concede that what was plain un'adult'erated fun as a kid has become, to some degree, therapeutic fun as an adult. And even when I strive to cast off adult perfectionist tendencies, I still try a little harder than I did as a kid not to knock-together something totally kack-handed!

I picked up this kit on a trip to my favourite (and only, so far as I know) local model shop, which is situated on the top floor of the Ely City Cycle Centre. I went there with Marcus, a model making pal whose fully-fledged adult perfectionism as a model-maker regularly causes me to wonder at my own current (and longstanding) inability to ever finish anything! 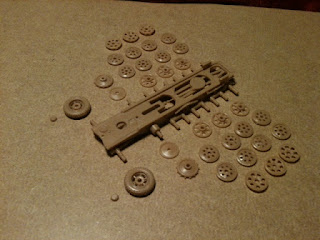 Cleaning up and laying out running-gear. 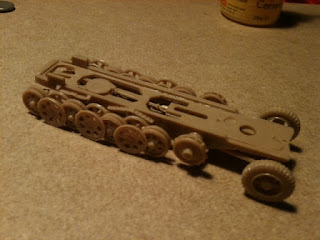 The wheels on the bus...

I had hoped to acquire a kit of a Sunderland flying boat, as I'd been marvelling at the example at Duxford IWM, but they only had what I deemed a too expensive Revell one. I'd been hoping to find the cheaper Airfix version [1]. As they didn't have this I opted for a Revell 1/72 British bomber (I forget exactly what; probably a Lancaster!?), and - I can't go without my WWII Jerry fix - the 1/76 Airfix SdKfz 7 with flak 88mm, the (ostensible) subject of today's post.

The underside of the main body of the SdKfz7 shows this kit to be of 1967 vintage (the 'made in England' has been, rather poorly, effaced!), and this is even older than my dear wife. Despite my comments about gleefully snipping and gluing like a nipper, I did take the trouble, thanks in part to learning the hard way on other kits, to tidy up the running gear, which, as so often, constitutes stage one if the build. 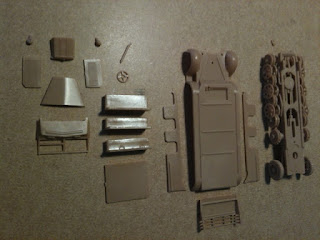 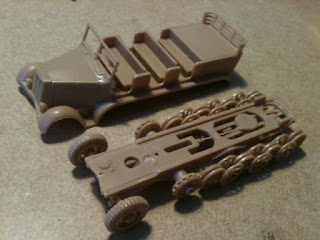 As the wheels and sub-chassis, and then the body, went together I was more impressed with the design and fit of this model, which shares in other respects a certain quaint basic-ness with many other older Airfix mouldings, than numerous other old Airfix warhorses, such as the Panther or Stug.

Areas where this no-frills feel leave most to be desired would be: the ever-present, ever-awful rubber band tracks; the stiffly (and identically, in three instances) posed figures; and the lack of interior detail in the half-track itself. 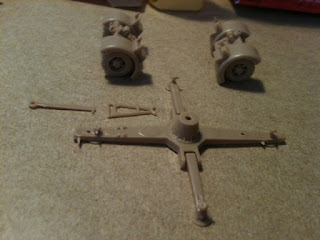 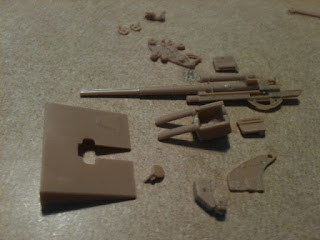 Preparing the gun for assembly.

The 88mm gun is slightly less satisfying, fit-wise. The movable gun mount needed a lot of jiggery-pokery to get it vaguely right. And there's barely room, once the gun shield is in place, for one of the rotary handles. Teresa commented on the clearly observable floppies and flimsiness of the movable parts, and my model-making is usually, it appears, nigh-on invisible to her!

Having said this, the 88mm gun, and its bogeys (cue juvenile snickering*), was undoubtedly heap-big fun to assemble. I emailed pics of this kit to my dad - it was 'modelling monday', and he was home alone, recuperating from heart surgery! - and a model-making buddy and former neighbour. The latter's response: 'I made that kit as kid, and loved it', or something very like that. 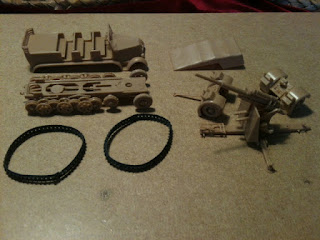 Gluing (yeah, right) the tracks. Had to melt the rubber in the end! 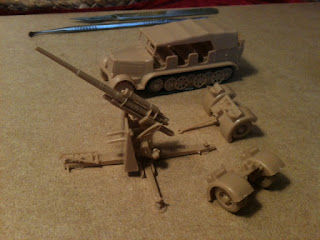 [1] Imagine my glee when, upon dropping Marcus back at his home, he made it a condition of my looking over his models, that I take away his un-made Airfix Sunderland! Marcus, you're a true friend and a gentleman.
Posted by Seb Palmer at 21:28