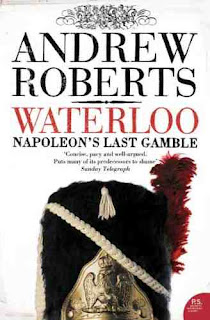 A concise, pacey, and highly readable account of Waterloo.

I enjoyed Andrew Roberts' rather grand Napoleon The Great a lot - and there was quite a lot of it to enjoy! It's good to see that he delivers equally well at a humbler scale.

Waterloo, Napoleon's Last Gamble, is certainly a real pleasure to read, being as clear, concise, and yet as comprehensive as one might reasonably hope for, in a book this small that deals with an event of such large import. 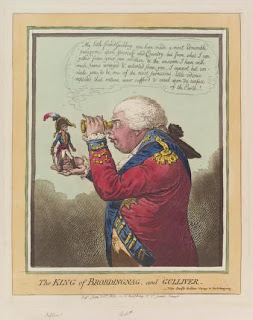 Napoleonic history is very often a question of scale, as Gillray knew.

After a brief introduction that neatly encapsulates both the enduring historical significance of Waterloo - frequently described, in a view Roberts himself embraces, as the end of 'the long eighteenth century' - and it's equally enduring fascination, Roberts then sets out the more specific context of the Waterloo campaign.

For the battle itself Roberts adopts the chronological 'five phase' structure, as favoured by a number of other authors on this potentially confusing topic. And I have to say that this really does help simplify the battle, and make comprehension of it that much easier.

Whilst many other things frequently occur within these five phases, each has a defining central event: phase one sees the French attack the forward position at Hougoumont; phase two finds D'Erlon's massed infantry attacking the Anglo-Allied centre; by phase three much is happening across the whole battlefield, but the central event is the series of massed French cavalry charges. 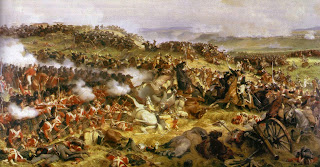 Waves of French cavalry break on the sturdy Allied squares.

The fifth and final phase really sums up Roberts subtitle, as Napoleon makes a last throw of Fortune's dice, sending in the Guard. But the 'invincibles' are defeated, after which the French crumble and are thoroughly routed, harried by the combined Anglo-Allied and Prussian forces.

Throughout all these phases the action is covered with an eye for both the big picture and the little details, making for a compelling read. The whole is then finished off with a pithy conclusion. Numerous controversies are addressed, some dismissed, others remaining open to debate. And the whole is thoroughly enjoyable and satisfying.

If one were being the harshest of critics, like Hazel Mills in her 2005 review of this book for the Guardian (here), one might easily argue that this little book verges on the redundant, simply recycling material that's already out there. 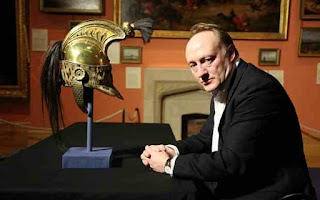 The author, and a French Dragoon helmet.

Indeed, I felt this was also largely true, despite his undoubted efforts to restore some lustre to the sometimes tarnished English view of Napoleon, and despite all the stuff about access to and use of a new edition of Napoleon's correspondence, of his Napoleon The Great.

In this book on Waterloo Roberts includes one previously unpublished letter - 'in the possession of the author' - by a Major Robert Dicks (who fought at Waterloo in the 42nd Royal Highland Regt, aka the Black Watch), as Appendix I of his three appendices.

Written before the battle, it's more about the Duchess of Richmond's Ball (and Dicks' own career prospects) than the forthcoming battle, and seems to me of only very marginal historical interest. Still, if I had such a letter I'd be excited and keen to share it with the world!

But, unlike the following Appendix II, 'Captain Fortuné de Brack's Letter of 1835', Dicks' missive contains no great revelations. De Brack's letter, which has appeared in print a few times before, is reproduced (as is Appendix III, Wellington's Waterloo Dispatch) in an edited form, and pertains to the battle itself, and phase three - the massed French cavalry charges - in particular. 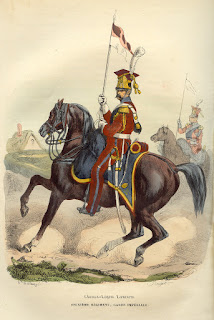 De Brack was an officer in the Red Lancers, of the Imperial Guard.

In it, this relatively lowly lancer officer appears to suggest that his own impetuosity might have triggered the cavalry attacks: his loudly articulated belief that the English were already doomed to lose, combined with a desire amongst his unit to move forward slightly, he claims, got amplified as the line shuffled forwards; what started as simply dressing the line grew into a swell that eventually burst, as the eager cavalry felt their moment had arrived.

As intriguing as this is, it's not news anymore. But personally none of this bothers me, as I don't feel that a book on this topic necessarily requires new insights or arguments to justify its existence. What this undoubtedly is is a concise and exciting account, another voice - and an erudite and eloquent one at that - in the ongoing literary conversation on this climactic epoch-ending epoch-making battle.

I thoroughly enjoyed it, and suspect that all but the most fussy of Napoleonic buffs (and admittedly there are plenty of those!) will love it to.
Posted by Seb Palmer at 10:58