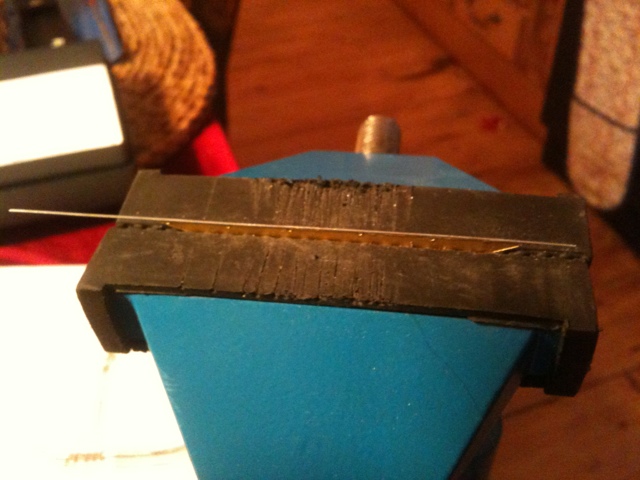 This bizarre pic - when I first glimpsed it in my photo library it took a few seconds for my brain to decipher what my eyes were actually looking at - shows my mini-vice, with a brass photo-etched sail in the jaws, and a small thin length of wire being 'super-glued' along the top edge.
The reasons for this were several: after agonising over how to proceed with both rigging in general and the rigging of the three for'ard sails in particular - the other sails, or 'shrouds' (still learning the nautical lingo!) were glued to masts/spars; whereas these three had to hang from ropes - I opted to complete this initial part of the rigging with fine wire. 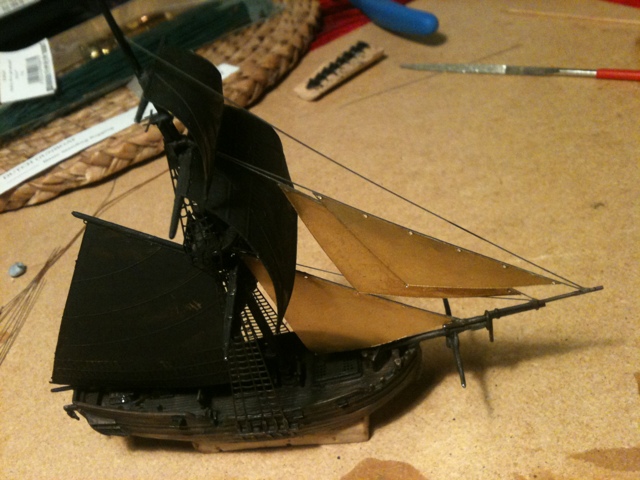 This was a butt-clenchingly difficult job in the end, made marginally worse by three or four hours of slow, painstaking work being wrecked in the tsunami of my wife's return from work.
I chose the wire, originally purchased for use in my scratch-built tree-building programme, for several reasons: metal is rigid; the wire is about the right gauge to visually match the photo-etched rigging that's already part of the model; it was the only suitable material immediately to hand! 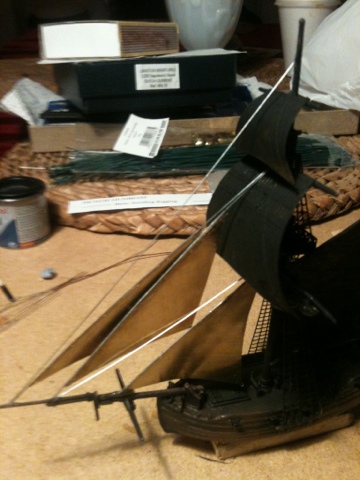 I was warned off using cotton thread, as it sags too easily, and fibers can fray, looking messy. And I wasn't able to get any fishing line, as suggested by a local model-making buddy.
I had also, inevitably perhaps, googled the topic, and after a bit of research I now feel I would like to try EZ-Line, or something similar. But that'll have to be some other time. 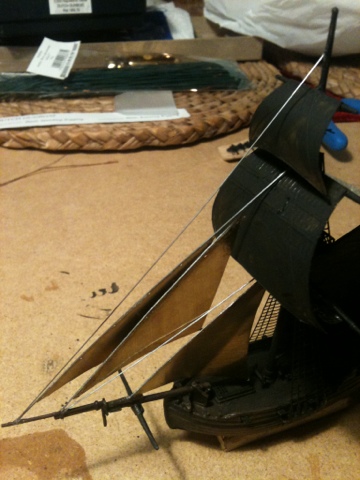 In the meantime I opted to use some wire I already had sitting in one of my several modelling sundries boxes. This wire actually has a flat rectangular profile in section. So it ain't round, like rope! But then again neither are the photo-etched ratlines. It turns our that this wire has a profile that fits quite well with the photo-etched rigging.
Everything about actually doing this turned out to be very difficult and frustrating: cutting the wire to length was tricky, as the model is fairly advanced in build-terms, making access fiddly; the sails had been bent, to appear as if billowing - so I had to straighten the edges to be glued to the rigging using the mini-vice; gluing stuff with cyano-acrylite glue is, I find, really maddening; once the sails were glued to the rigging, positioning them 'twixt bowsprit and the main mast took aeons, as holding these awkward shapes in place as the glue goes off is hyper-fiddly. Things fell apart many, many, many times!
Still, I'm hoping the combo of metal wire and superglue will reduce the likelihood of sagging, and perhaps even add strength to the finished model.
I still have no really clear ideas on exactly how I'll do the remaining rigging. I might try fishing line, as my pal suggested. Although I do now know a bit more about one potential way I might do it! 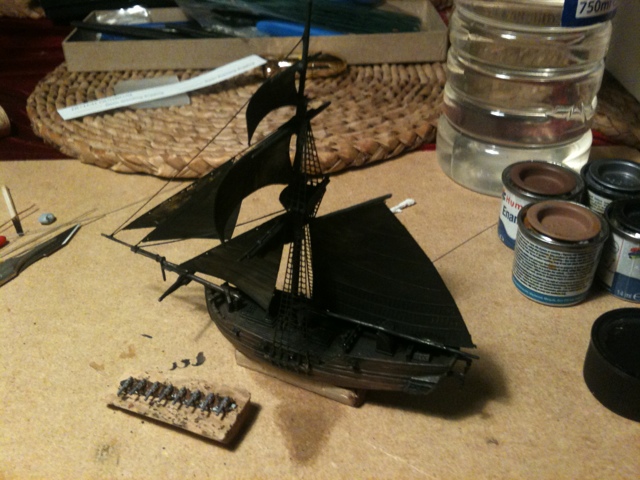 The evenings session ended with a very slapdash coat of gunmetal grey and a lighter wood colour, all with Humbrol enamels, for the rather cute little cannons, and a black base-coat for the newly attached rigging and forward sails.
Having looked at some other builds, e.g. this [link] sloop, via TMP and other sources, I can see that I'm going about this in a less than ideal way. Chiefly I'm thinking about how hard it's going to be to paint fine detail in amongst all the fiddly and hard to access deck, and the overlapping shrouds, etc.
At least I had the sense to paint the guns separately! I also chose to file down the undersides of the cannon, so they would sit better, with the barrels poking through the gun ports. Whils this might make them look a little odd on close inspection, it ought also to mean they'll be better anchored to the deck.
In respect of anchorage, can anyone advise on attaching the anchor?
Posted by Seb Palmer at 22:46