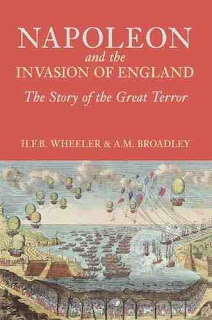 Some years back, after reading Napoleon & The Invasion of England, pictured above, I got a yen to acquire some French Napoleonic vessels.

Looking into the idea I discovered that Langton Miniatures make a number of 1/300th Napoleonic naval stuff. Baulking at the £280 asking price of HMS Victory, and anyway wanting something for the other team, I opted instead for one of their cheapest/smallest kits.

I figured this was as wise as it was thrifty, seeing as I know just about nothing about naval warfare or model making. It meant I could learn on the job without too much at stake. 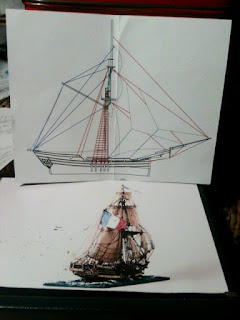 The box, showing a nice looking image of the completed kit. And above that, info on the rigging.

So I ordered the model listed as a Dutch Gunboat in French service. It's currently showing on the Langton website priced at £32.50. I'm not sure if that's what  it cost though, as I got it many moons ago. I think, in fact, that I persuaded Teresa to get it for me as a Christmas or birthday gift. Anyway, as soon as I had it, I began to build it.

Now, as I've said before, I don't like to be critical of the work of small producers - passionate specialists whose enterprise and skill I certainly admire - but by the same token, I also feel it's only right to be truthful.

Although in many respects the kit itself is a lovely thing, the major gripe in this instance is one of poor or lacking instructions.

I don't know if my kit was delivered with anything missing or not. I did contact Rod Langton, but this was all so long ago now I forget what transpired! I only know that a reasonable number of parts listed in the 'kit contents' list (see below) didn't appear in either of the two instructional diagrams. 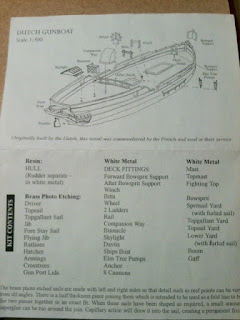 The rather meagre instructions, relating only to construction of the hull and deck detail, and the list of parts.

These line drawings - one of the rigging, and one of the hull/deck - were the only instructional components in the kit, as I received it, and neither are clear or comprehensive enough for a landlubber like me!
One thing I do recall, after my chat with Mr Langton, is that I was still none the wiser regarding several elements of the kit. The upshot was that the build reached a certain point and then simply stalled.

Returning to the present (in more than one sense!); having just moved home, and having had to contend with moving masses of unfinished models and wargaming miniatures, I decided today, on a more or less random whim - basically just 'cause I happened to see this particular model sitting there, dusty and unfinished - to resume working on it. Quite quickly I recalled why I'd stopped before. But this time I thought 'sod it, I'll just have to busk it!' 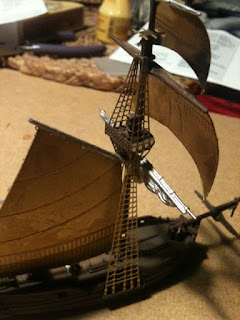 In the pics above and below you can see pretty clearly the three major elements of the kit: the resin hull (already base-coated in a 'wood' brown Humbrol enamel), the white metal (masts and most smaller detail elements, plus some larger ones, like the furled mainsail), and the brass-photo etched parts. 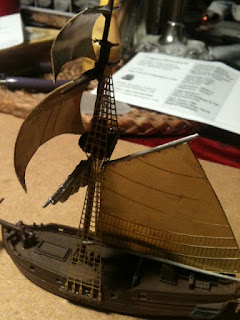 I did try finding some useful ref. online, but failed. So I just went at it, with a will. And the pics in this post show where the model's currently at. Since initially posting this, I've worked out what to do with a few parts that previously had me stumped, and added them.
The parts in question transpired to be the two ladders, from the main deck to the rear raised (poop?) deck, the gun port hatches, and the grills that go over the hatches on the main deck. I worked these elements out visually, with the aid of the 'kit contents' list, as they're not referred to in the hull/deck assembly image.
This still leaves me in the dark about how to properly mount the small rowing boat (is this known as a 'jolly' boat?), which seems to me too big, and the anchor.
There's also the issue of how to do the rigging, which element of the build also affects the addition of the front three sails, which remain as yet unattached.

Most of the shrouds are single thickness sheets of photo-etched brass. But a couple are double thickness. I believe this is done in order to show detail on both sides.

Whilst this is good from a detail point of view, it's less good from a consistency perspective - some shrouds are thin, some thick - and does entail the rather tricky and messy operation (at least I found it so) of super-gluing the two faces together. I managed to align one pretty exactly. The other is out by microns, but it's amazing what the eye picks up.

These sails also need shaping, and of course small thin sheets of brass don't share the same properties as large expanses of woven canvas! Still, I hope, with some judicious trompe-l'oeil painting, that I might make them look more 'billowing'.

If anyone's built this model and can advise me on a few points, I'd be very grateful! In the meantime this Dutch Gunboat joins my armada of unfinished stuff! 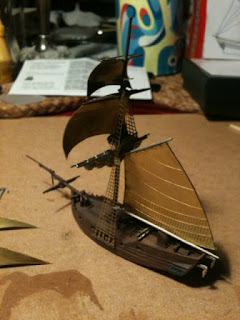 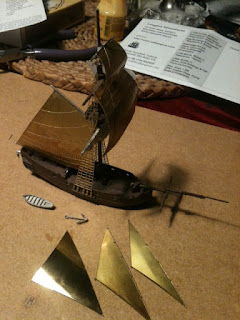 Can anyone advise re rigging: shall I use thread, or perhaps that stuff (sorry, don't know what it's called!?) that model aeroplane makers use for wire? It's a kind of stretchy rubbery stuff. I think it comes in a tube?

Another small grumble is that the kit is illustrated with a beautifully finished model - nothing wrong with that in itself - except it appears to differ materially from the kit as supplied (e.g. the boat hanging off the rear appears to be both smaller, and not hung in the same way as the kit allows for).

In conclusion, for the time being at any rate, although this is slowly building into a nice boat, it hasn't been straightforward. Better more comprehensive instructions would be a real, and I feel very necessary, enhancement.

[1] Langton products seem, in my experience so far, to assume prior knowledge of naval and nautical terminology. Landsman that I am, I was constantly looking up terms. Still, it's helping expand my vocabulary.