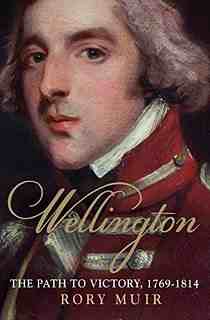 In Napoleon's Wars, historian Charles Esdaile asked whether Napoleon was proof of the 'great man' view of history. Rather frustratingly, he seemed to answer both yes and no. There was no such equivocal fudging in Wellington's own estimate of himself: 'It's a fine thing to be a great man, is it not?' is how he put it to Lady Shelley, as the crowds lionised him in 1814.

Nor is Rory Muir stinting in his praise, in Wellington, The Path To Victory, when he observes that 'When every other allowance has been made for the contributions of others, Wellington remains the central, indispensable, animating figure in explaining the allied success in the Peninsula.' Or, to state it even more strongly, whilst even many of Wellington's most capable subordinates 'could have been replaced without any great change in the course of affairs. Wellington, by contrast, was quite simply irreplaceable – the essential ingredient of victory.'

Rory Muir's Wellington, The Path To Victory is only the first part of a two-volume biography. Three decades in the making, and with an online commentary (www.lifeofwellington.co.uk) that the author says is almost as big as the two-volume work itself, Muir displays a passionate interest in his subject which his book successfully communicates.

Hoppner, Arthur Wesley, (c. 1795). The complete image from which Muir's cover is derived.

I already have a much shorter and as yet unread Wellington biog, by Elizabeth Longford (actually this is itself a much-reduced version of another two-volume biography of the 'Iron Duke'!). But, for a number of reasons, I've always kind of avoided Wellington, and, even more self-consciously, the Peninsular Campaign, the war that really made him, and the campaign which, in many respects, forms the backbone of this volume. 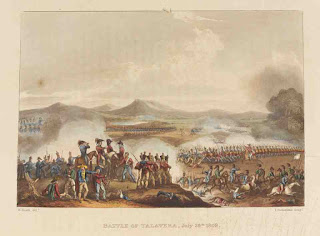 Sutherland, after Heath, The Battle of Talavera, 28 July 1809 (1815). A portion of this image decorates the spine and back-cover of Muir's book.

Despite this self-imposed prohibition on things British and Wellingtonian I've always allowed myself the latitude to indulge a Waterloo fixation, as that was the battle that begat my interest in the Napoleonic era. But even when I read what I believe was my first piece of writing on that subject - a feature in an Eagle annual on Ensign Ewart's capture of the Eagle of the 45th - it was the French that had the real mystique for me. And my subsequent reading in things Napoleonic has focussed mainly on Napoleon and his major campaigns, from Egypt and Italy to his continual scraps with Austria, Prussia and Russia.


Britain's part in the Napoleonic Wars, outside of Trafalgar and Waterloo, had always seemed to me, like our physical position in Europe, peripheral. Certainly for the most part Napoleon, to his cost, treated Wellington's activities in the Peninsula as a sideshow. And then there's something about the anti-Enlightenment stance that runs through the British anti-Jacobin and then Boney-phobic stance of the era - so beautifully illustrated in the prints of Gillray et al - that always rankled. As did a nagging image of the English elite as the paymaster war-pimps of Ancien Regime Europe, continually bankrolling never-ending coalitions that sought to reverse the effects of the French Revolution, and restore a supposedly 'legitimate' Bourbon to the French throne.

Boney and his cronies chopping down the 'Royal Oak', and supplanting it with The New Dynasty. Establishment propaganda from the master caricaturist of the age, Gillray.

As part of this general position, my sceptical views about Wellington were largely confirmed, and perhaps even strengthened, by such brushes with him as hearing the Wellington vs Napoleon episode of In Our Time, or reading Peter Hofschröer's fascinating book, Wellington's Smallest Victory. But there's really no getting away from it: love him, loathe him, or whatever you may feel, Britain's role in Napoleon's downfall, and Wellington's crucial part in that, as the most potent military instrument of British diplomatic will, is, as Muir so adroitly confirms in this book, inescapable.

But I didn't yet know, or rather fully appreciate this, as I stood in the wonderful military history section of Ely's Topping Books a couple of weeks ago, deliberating on what little literary treat a recent and unexpected utility-bill refund windfall might allow me. After long deliberation I settled on this rather fat tome, and I've been glued to it ever since. 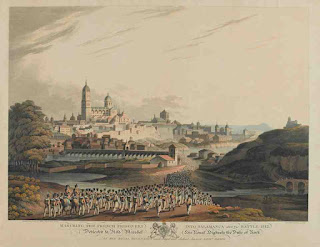 A nice aquatint depicting British troops escorting French prisoners into the city after the battle of Salamanca. This is not one of the images in this well-illustrated book. 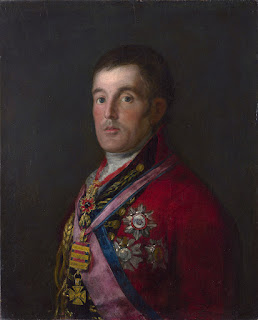 Although Goya's Portrait of the Duke of Wellington, as Muir observes, doesn't sit well amidst most other portraits of him, it does, I think, capture something of the colder, haughtier and perhaps even war-wearied side of his character.

Wellington was in his lifetime sometimes controversial, and not always greatly loved, and Muir's portrait, whilst backlit by a clear and understandable admiration for the man and his achievements, is no hagiography. One key insight for me is that Muir attributes Wellington's key motivation not to egomania, although he did suffer from this to some degree, but vocation: in India he discovered he had military and diplomatic talents, and he moved back to Europe to further pursue and enlarge upon these.

Muir also paints Wellington as a pragmatist, not a theorist, and in both judgements I'd agree, and observe that these qualities give him a different but still very powerful charisma: he knew what he excelled in, and he pursued it. This is not the same as the romantic hero/adventurer charisma - although Wellington was undoubtedly both these things in many ways - of Napoleon. But as Muir drily observes, one Napoleon is enough for any generation!

As well as Wellington's impressive track record as a master of strategy and tactics, I share Muir's admiration for his interest in logistics, and, in connection with that, his concern, both humane and eminently pragmatic (far more sustainable than Napoleon's 'war must pay for war' idea) that the costs of war shouldn't be borne unduly by the civil population in theatres of conflict. As cold a fish as many may have found him on a personal level, these things speak for an underlying humanity that subsequent military theorists and practitioners have very largely abandoned. 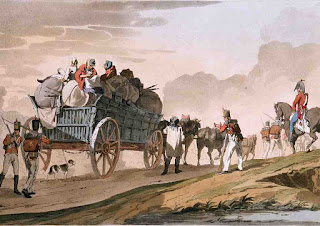 Atkinson, Baggage Wagon, 1807. Like Wellington, I'm fascinated by the importance of logistics in this era. If only I also had his talent, drive, and connections! 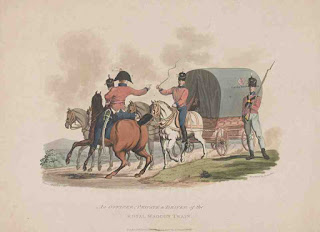 As well as the unofficial camp followers, their was also the Royal Wagon Train, as depicted in this contemporary print.

I still don't find Wellington as charismatic, intriguing or, speaking frankly, romantically appealing as Napoleon. But then neither, according to Muir, did many of Wellington's own staff. That he was admired, respected and followed with great devotion is certain, but it seems not many found him easy to love; not even his wife (although to be fair to her she certainly tried [1]). But the story of his rise to prominence, via Irish politics, as an MP in England, a 'Sepoy General' in India, and culminating in his expert handling of the British Army and it's allies in the long Peninsular campaign, is a fascinating one, which Muir tells very well. 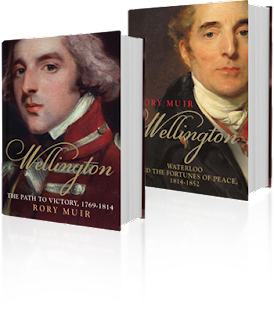 Longford's two volumes were entitled The Years Of The Sword, and Pillar Of State. I haven't read either, nor yet even the much truncated single volume edition I have. But Muir has chosen to end his first Wellington volume, not in 1815, with the perhaps more obvious military marker of Waterloo, but in 1814, with the end of the campaign that saw Napoleon finally abdicating.

The cynic in me wonders if Muir has done this (either on his own cognisance, or at a crafty editors bidding), so as to ensure that military buff types - us fellows - buy the second volume, to get our Waterloo fix. If the divide was post-Warerloo, I must confess that, as interested as I am in history generally, volume one may have been all I felt I needed!

Writing for The New Statesman, Simon Heffer enthuses 'The second volume - to judge by his first - cannot come soon enough.' Well, I have to say I thoroughly enjoyed this, and fairly breezed through the near-600 pages. Waterloo is tempting, to an addict like me. But will I need the remaining 500 pages of volume two? Hmm!? A difficult call! 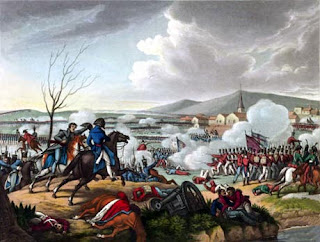 Two views of Vimeiro, above and below. The first of Wellington's many significant victories in the Peninsular, it was, rather unfortunately, eclipsed by the opprobrium generated by the subsequent Convention of Cintra, which Wellington signed. 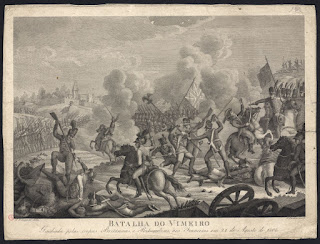 [1] One has to feel a little sorry for Wellington's wife, who he courted whilst still a (relatively) poor and prospect-less aristocrat. Their eventual marriage, which initially looked like a romantic dream come true, proved anything but, Wellington more or less abandoning 'Kitty', only a few years into their marriage, preferring to go a-soldiering. He was pretty much the only senior figure not to go home on leave (he did return once, due to the fall-out from the Cintra affair, but even then barely saw his wife) for a period of between four and five years of continuous campaigning.

But it can be striking when someone as charming and well-loved as David Attenborough makes only the very rarest of mentions of his wife in his Life On Air autobiogrpahy (the sudden mention of her on her demise comes as something of a narrative shock, in amongst all the natural history and other media-related stuff!). Some men's public lives are perhaps their raison d'être, becoming all-consuming. And sometimes we all benefit from what, in an 'ordinary soul', might be seen as a lopsided character, and certainly makes the individual in question anything but ordinary. 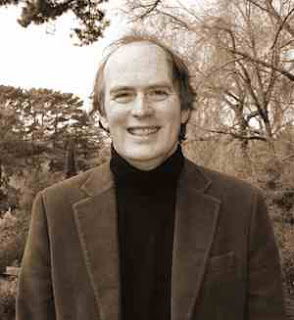