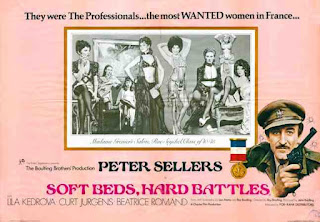 Not really that relevant to my wargaming interests, this, I guess, except inasmuch as it's set in WWII and it's a guilty-pleasure, perhaps!? Soft Beds, Hard Battles is an odd film; mostly pure farce, but shot through with streaks of dark absurdist humour. I think it's actually quite a bit cleverer than the blatant displays of boobs and innuendo might at first suggest.

The basis of the plot is that English Major Robinson (Peter Sellers), who misses the boat for Dunkirk when his motorbike won't start, hides out in the high-class Parisian bordello he's been visiting. Very soon after this the Germans arrive, and Gen. von Grotjahn (Curd Jürgens) visits - or rather renews his acquaintanceship with - Madame Grenier (Lila Kedrova) and her charges, bringing Adolf Hitler (Sellers) and other top brass to see one of the 'highlights' of Paris.


The film has an American in a prominent role, the rather wet Alan Cassidy (Rex Stallings), and what I'll describe as a 'Voice of America' style commentary, presumably to aid the film's prospects of performing (titter) across the pond. After Robinson kills his first German officer, Cassidy and the ladies of the cathouse are gradually drawn deeper into the affair (chortle), as the Major leaves them to dispose of the bodies, with unfortunate repercussions for another regular client of the whorehouse, the French  Gen. Latour (Sellers). 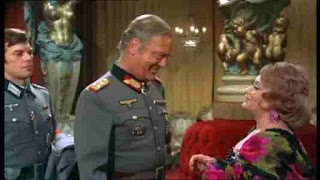 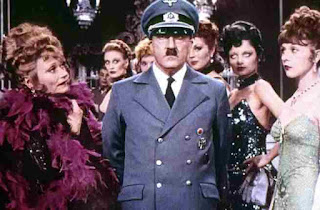 Herr Hitler is not in any way drawn to the ladies.

Gestapo chief Herr Schroeder (Sellers), like his ultimate boss, is somewhat Puritanical, clearly abhorring what he regards as depraved, and from the outset sets out to make life hard (eh?) for the working girls and their clientele. But Jürgens interprets the Führer's orders in a different light, and is always stymying Schroeder's efforts to investigate and close the house of ill-repute.

There's a predictable but nonetheless enjoyable sub-plot, concerning the innocent young Marie-Claude (Béatrice Romand), who relatives deposit with her aunt, Madame Grenier. Inevitably she evolves from a demur innocent young country girl into a more wanton and worldly-wise woman. Predictable as the basic thrust (harumph) of this subplot is, it's done well, and in a slightly off-kilter manner. But by the end of the film she's a quite different creature, causing the French President (Sellers) to forget himself during a post-war decoration ceremony. 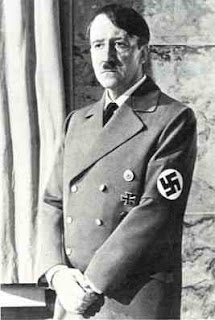 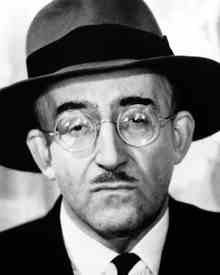 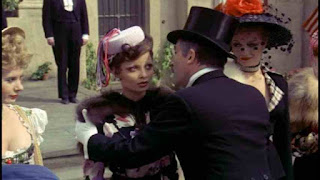 The French Premiere, engaged in his diplomatic duties.

Sellers is excellent in his multiple guises, something he clearly loved to do. Think of Dr Strangelove, for another if quite different example. This is somewhat more in the vein of Alec Guiness in the superb classic Kind Hearts and Coronets. The latter, however, was a black and white movie that aimed for a sophisticated if dark ambience. This is is in gaudy colour, and is aimed decidedly lower - about crotch level - by and large.


I've often thought, whilst watching Sellers as Clouseau, or in many other of his actually quite diverse roles, that he had the perfect physiognomy to play Hitler. And indeed, that he often portrayed characters who had an almost grotesque or absurd air of injured dignity, a quality that I think makes him psychologically suited to the role of an unbalanced dictator, working out his personal neuroses under the guise of avenging Germany, who, like Hitler (or so he feels) has been 'betrayed' by a world he detests. Watching him play der Führer, if only fleetingly, only confirms that. It's a pity he never did a full movie in the role, as opposed to what amounts to a cameo, as here. 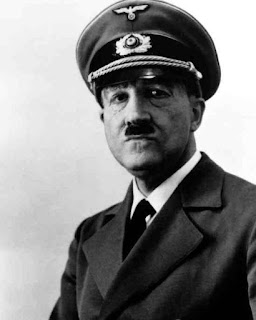 Yep, Sellers is a ringer for the Führer.

It's true that he's playing six very broadly drawn caricatures. Sure, they deliberately play to stereotypes. But isn't that the point? And they are well observed and well played, as well as being broad-brushstroke. And in the Hitler and Schroeder characters Sellers conveys both the absurdity and menace inherent in such people. I personally think this film is as satirical as it is farcical. When I read a one-star review of the DVD on Amazon UK's website, describing it as 'soft-porn Allo Allo', whilst admitting that on one level the recveiwer's not wrong, I think they're missing the point.


Georgian caricaturists could be very crude, violent and lewd, and were, more often than not, peddling thinly dressed-up establishment propaganda, but we recognise that there's some art and sophistication as well as ribaldry and grounds for litigation in their work. Admittedly this film doesn't have the sophistication of, say, Dr Strangelove, or the best works of Gillray, but it does have a darker side, and one that's possible to read as critical of the hypocrisy of mainstream chest-thumping war narratives. As the Padre (Vernon Dobtchev) says, 'war makes strange bedfellows'. 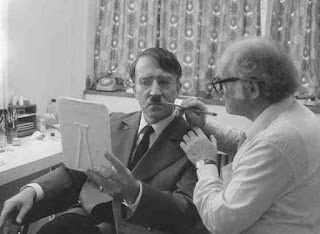 Rob Freeborn does Sellers' make up. Freeborn is best known as the man who created Yoda (a hybrid of himself and Einstein!), for the original Star Wars.

And, contrary to the feelings of some, who are not so impressed with this aspect of the film, I think the make-up department did a splendid job in facilitating Sellers' pre-CGI chameleon-like transformations, from his geriatric French general, to his dashing British agent. Even his Japanese make-up and character are better than the overtly low-brow tone might imply; 'you rike suck-ee?' (sake) says Prince Kyoto, to the pretty young 'nun' on her knees before him. Certainly the Sellers/Kyoto transformation is much better than Sean '007' Connery's very lame Japanese fisherman in You Only Live Twice.


According to the credits Sellers also did the narration. Although the only extra-feature on my DVD of the film casts some doubt on this: the extras consist of numerous short clips featuring parts of the original 107 minute film edited out for the 97 minute theatrical release, and have what is clearly Seller's narrating, but with a French accent.


Did he also do the American narration? Which, incidentally, differs in content as well as delivery. Whatever the answer is, even the  American voice-over (and its satirical nature would perhaps be more overtly clear if it definitely was Sellers) - like the content it communicates - still undercuts the straight-laced 'Voice-of-America' style delivery.


I would say that rather than being as dumb as it might at first make itself out to be, Soft Beds, Hard Battles is more absurdist. As some reviewers on the Amazon UK website have noted, life's too important to be taken too seriously, and a species that holds itself to ransom over a kettle-full of uranium... well, quite! 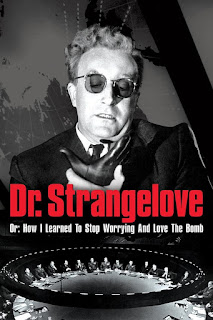 And then, finally and perhaps most importantly, it IS actually funny. At times very funny. There comes a point in the plot, in keeping with the flimsy silliness of the basic premise, where the 'undercovers' black-ops are stepped up several gears, by the introduction of a chemical weapon, with amusingly dire consequences for the military plans and bowels of the Third Reich.

Fatal flatulence alone is guaranteed to make me chortle. It's a shame they edited one of the fart fatalities out. They also removed a scene featuring Hitler deciding to drop his invasion of Britain, instead opting to attack Russia, on the advice of a Nazi-gypsy lady with a crystal ball!


Prudishness or politically correct dogma could very well make this uncomfortable viewing for some, but we (my wife and I) thoroughly enjoyed it. Certainly not a classic, like Dr Strangelove, but not as bad as most review aggregators suggest, and still, in my view, definitely worth seeing.