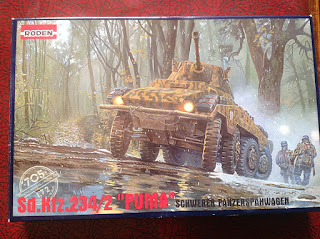 Roden have, hands down, in my view, the best and most attractive box art on the current 1/72 model scene. Proper old-fashioned painted artworks. Bravo, Roden!

I love the Roden box paintings: this one is not just a great illustration of the vehicle, but an image full of atmosphere, with rain, mist and the woods, and a really cool, well-chosen angle of view, close to the ground, making  for a dramatic composition, and getting excellent mileage out of the wet ground surface. Brilliant!

I originally started making this kit about six or more months ago. I got as far as constructing the turret and spare wheel, and then, for reasons long forgotten, set it aside. Since then we've moved home, and I've been very lucky not to lose this (and several other kits), as unbeknownst to myself, I'd left several incomplete models at the old place. I was visiting a model making pal in my old turf, yesterday evening, just around the corner from our former home. So I thought I'd check if the new owners had moved in, and if they had any post for Teresa or me. They did. Beacoup de post! 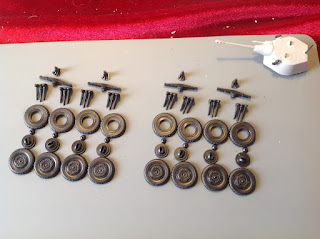 And as I stood sheepishly watching the new residents of our aulde home sorting out a pile of post for us, I spotted a pile of models. Thank goodness the nice new folks hadn't simply binned 'em all! There was even an Apollo lunar module, in amongst all the German armour. The latter belongs to one of my buddies, who I'm trying to get into model making.

I appear to have lost the spare wheel for the Puma, but considering I very nearly lost five models (this Puma, the Apollo, two SPGs and a half-track!), I consider that a minor loss. Indeed, it makes my wonder if I might try my hand at casting a resin wheel using one of the road wheels, thereby turning the loss into a learning opportunity. Hmm? We shall see... That'd require some investment of time and money, neither of which are plentiful right now. 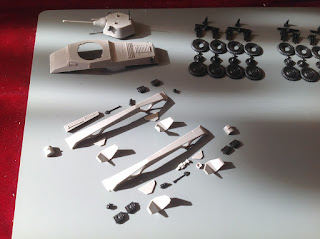 Moved ahead, leaving wheels unassembled, and cleaned up mudguards and associated stowage bumpf.

Back to the kit itself. Due to the bitty schedule in the making of this kit (on my part), I didn't holograph the spruces... Eh!? Holograph the spruces! That's predictive text for you. I didn't photograph the sprues, instruction, decals, etc. And I can't be doing with trying to do that now, what with the model well underway. It is worth noting, however, that the model is, on the whole, very cleanly and crisply moulded. There's precious little flash, and most of the parts fit snugly together. 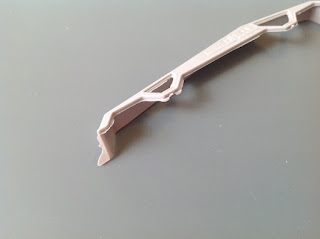 Did I speak too soon regarding flash? Well, not really. This was the worst bit on the entire kit.


I find the preponderance of black styrene parts in this model - the main 'body' sprue is light grey, the rest is black - a little odd. It's not something I've seen before. Most kits have one colour for the bulk of the kit, and I've never seen that in black yet, and just the tracks in black. On this trackless vehicle having the wheels black, esp. the tires, has a kind of logic of some sort. But the kit builds up into an unusual looking two-tone affair, prior to painting. It's also easier to lose small dark bits of plastic, esp. if you're model-making is usually in the darker evening time! 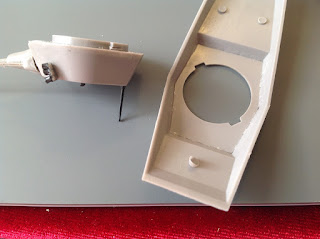 The only bit not to go together smoothly was the insertion of the turret; not enough (any!?) clearance for the 'pegs'. 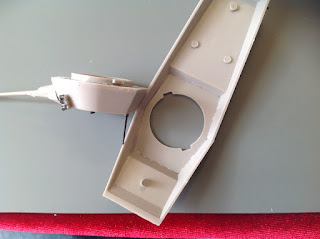 Circumcision? I had to cut away some of the male part. I actually had to go back and cut away more than is shown here, before the turret went in. 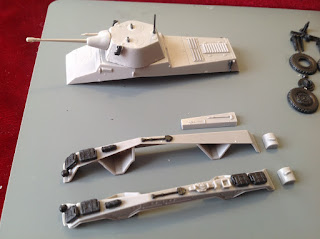 This stagewent together nicely, and was fun to build. I needed photo ref to help me place various bits of stowage.

Rather strangely, to my mind, this kit has the doors of the side stowage bins, integral to the skirts/mudguard, as separately moulded pieces. So, in theory one could model these open (although there's no internal detail). What would've been much better is to have had the crew hatches and drivers viewing ports as separate parts, pref with internal face detail and hinges. This is esp. so given the internal detail, as it'd mean you could perhaps glimpse some of it, or add crew figures, etc. 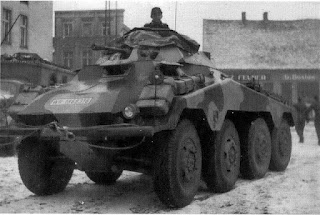 Although this is a different variant, I like the camo pattern, and may go this route when I paint the vehicle. 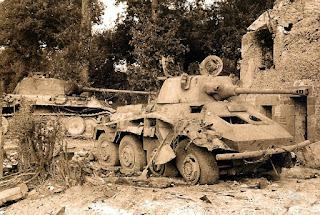 A fair number of the photos that came up when I googled 'SdKfz 234 Puma' were knocked-out hulks. This is a particularly nice Panzer graveyard pic, what with the Panther and the trees and buildings, and the tinted monochrome effect.

I managed to get another stint at the modelling table in before bedtime. This means that today I'll have done 90% of this Roden Puma build. Although I didn't take any snaps at the very end of the session, the wheels and most of the suspension doodads, etc, are all in position. This is the most complex aspect of this build.

There's some interior detail, as well. But I left that out this time. I usually do it, regardless of whether it'll be visible by the end of the build. But this time I could'nae be arsed. Plus there are no upper deck hatches one can leave open (without getting into conversion territory, which I'm not up for in this occasion). 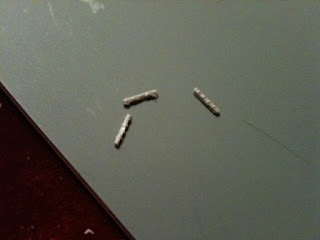 This part was originally one piece, but separating it from the sprue resulted in this little trio of bits. 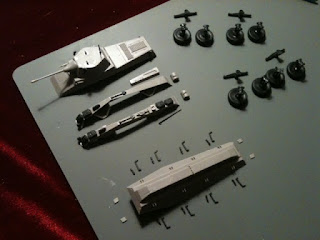 Everything so far, laid out, prior to assembly of suspension elements.

I'm wondering about substituting stretched-sprue antennae, and poss. painting the wheels before hull assembly, so as to try out some new techniques, in bringing out detail and adding weathering on the tyres. I had also contemplated having some of the wheels aligned as if turning, but as this part of the model is so complex and fiddly I eventually opted to keep it very simple, and have all the wheels (as far as I could!) in line. 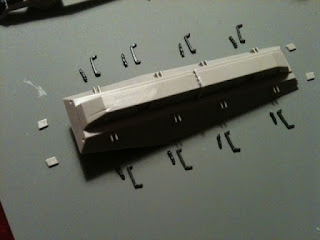 One or two parts of this kit, e.g. the little grey rhomboid shapes at each corner of the hull (the small as yet unattached bits), don't seem to be numbered right in the instructions. Where this happens I just consult ref and/or use my intuition/common sense, 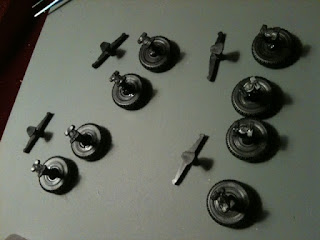 I pondered on this stage for a while, as I could see it was going to be tricky getting the parts to sit and glue right. The wishbone leaf suspension elements only touch the axle/wheel assembly in very small area, and there's the free-floating weight of the part where the main axle enters the chassis. 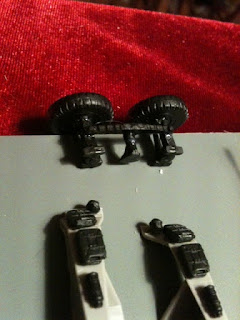 In the end I used the edge of my cutting mat, which, rather fortuitously, seemed about the right height for the job.

Once I'd found a way to get one pair of wheels glued to the axle I went ahead with all of them, as pictured below. What I didn't photograph - just had to turn in (late/tired/work is early-start tomorrow) - was the final step I did before bedtime, gluing all the wheels onto the chassis. This also involved adding some of the smallest and fiddliest parts of the kit to the underside.

All that's left to do now is put the chassis, mudguards, and upper body together, and add a few final parts, such as the front bumper, and she'll be ready to start painting. I now have both a new airbrush, and a generator (thanks to Paul C for the latter), so my growing queue of unfinished models will - if all the airbrush bits are working ok - soon be going into Der 'Operating Theatre'! 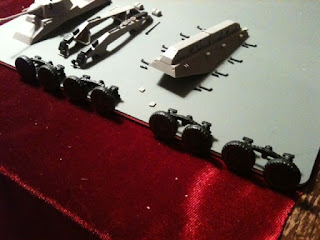 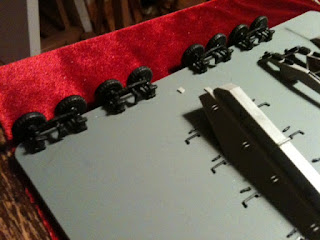 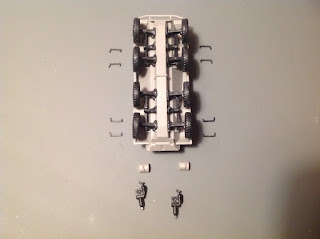 UPDATE, 27/4/16: After a lost weekend - lost, alas, to a brief viral cold - it's back in the model-making saddle, finishing off the Roden Puma. The first job was to assemble the body, mudguards, etc. And then I finally finished all the fiddly stuff underneath. This was not as the instructions suggested, but I thought that some of the sequencing in the instructions could definitely be improved upon, as could some issues of clarity.

The little hooks (still attached to stubs of sprue) above, weren't even referred to in the assembly instructions. And the orientation of the rear exhaust 'cans' was something I had to check against ref, as it didn't seem right. Both aerials ended up snapping, so I may replace them with stretched sproooo, or I might use real wire. What's a good rigid wire for this sort of job, anybody? 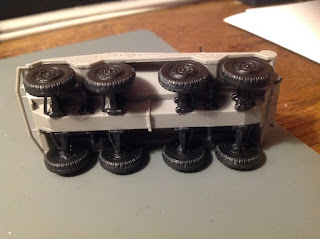 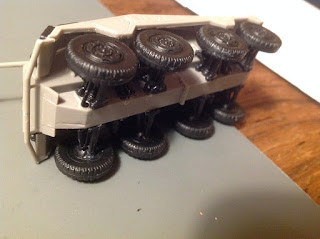 The Puma joins my growing collection of recently built and as yet unpainted German armour. The partially built / painted kits below were amongst the stuff I recently salvaged from our former home. There's stacks more unfinished stuff in several boxes, awaiting my arrival in airbrush-ville. I do already have an airbrush that will undercoat models (poss two now, as there was also another single-action brush attached to the compressors hose). But I've now also  got the Omni 4000, a full-on dual-action airbrush, for everything from detail to blocking in colours, plus I've finally got a compressor. 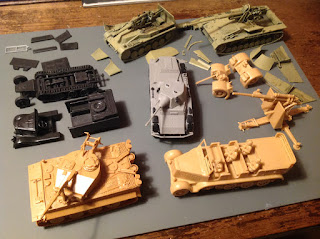 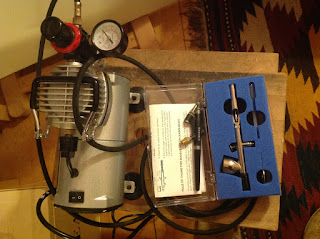 Rather annoyingly though, as the pic below shoes, my male and female bits, 'twixt brush and hose, aren't compatible. Can't wait till I get the adaptor, so I can finally start 'proper' detail spraying! 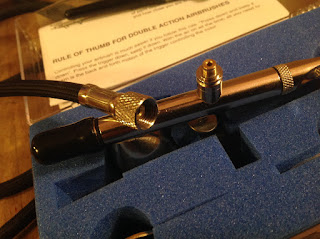