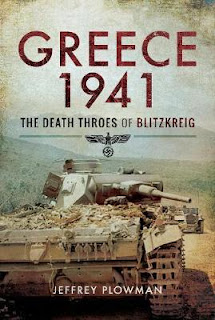 I've wanted to know more about the Greek Campaign of '41 since seeing the very brief but tantalising bits of footage on it in The World At War. The look of the buildings and terrain in those brief clips, I think, drew me towards this theatre.

Operation Lustre, as the campaign was known, is but a passing footnote in that epic TV series and, as the dust jacket blurb for this book says, remains 'a neglected theatre of the Second World War'. The campaigns of North Africa have taken the lions share of attention in relation to the Mediterranean. Even the subsequent battle for Crete eclipses Greece in terms of coverage in much WWII history. 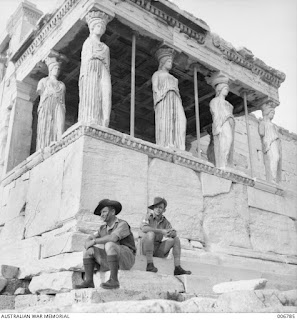 Aussie troops posed, like any tourists, at sites of interest.* 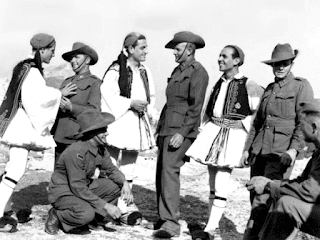 Australian and Greek troops in a very staged looking pic.*

Anzac forces played a large part in this campaign, and Plowman, a Kiwi himself, judging from his special interest in NZ forces and info in his Acknowledgments section, covers everything from the larger strategic picture, to the nitty-gritty firsthand of battle. The writing is very good, let down occasionally by a few editorial oversights.

Where the book is weaker is, despite a too brief glossary, the lack of explanation of certain acronyms or military terms, and the maps. The last is a common issue in military history literature, I find. I like to have sufficient and detailed enough maps to try and follow the action visually, as well as textually. But there are not enough nor detailed enough maps here. 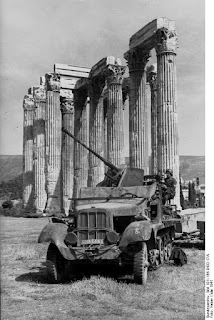 German flak against a fabulous backdrop of classical columns.* 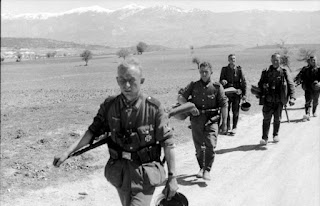 Despite the Blitzkrieg myth a lot of Landser slogged along on foot.* 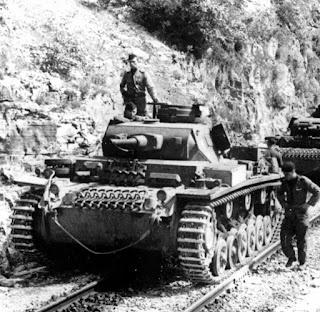 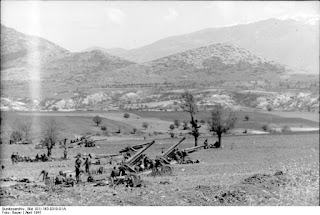 German artillery in a beautiful landscape.* 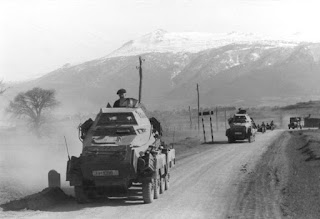 Most Greek roads were dirt tracks like these; ok in good weather, but appalling when it rained.*

However, overall Greece 1941 is well enough written to keep the reader - or this one at by rate - excited and interested. The bigger picture is sketched out at either end of the narrative, with the bulk of the book given over to the blow by blow ground level action, with excellent use of firsthand accounts keeping it very lively. This said, there are times when the barrage of unit numbers and names gets a bit tough to keep a handle on. But that's war, complex, ever-changing, confusing!

The Commonwealth forces for the Greek campaign were always under strength, and poorly equipped compared with the German invaders. [1] And to some degree the whole operation was doomed from the outset. Plowman maintains, however, that the Allied forces, even the Greek element, gave a good account of themselves. 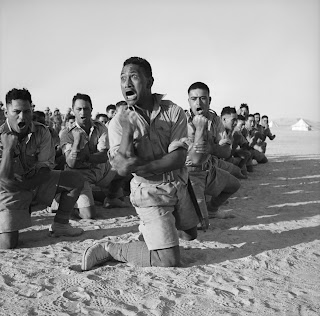 Amongst the NZ forces in Greece was this Maori unit.* 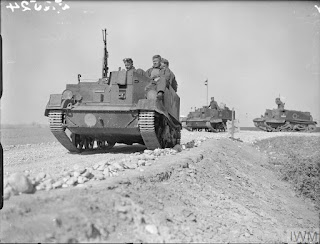 One of the mainstays of the Allied contingent, the Universal Carrier. 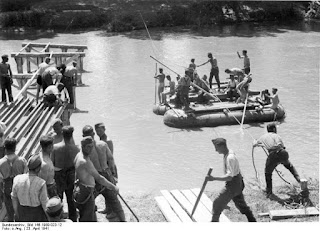 Soon it was the Germans turn to play tourist.* 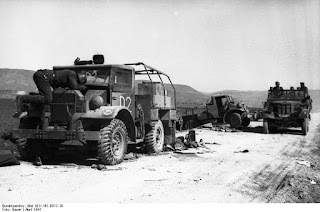 Germans pass by and examine wrecked and abondoned Allied materiel.

I think the provocative subtitle of the book, The Death Throes of Blitzkrieg, overstates things somewhat. But Plowman's contention that this may be the first time the vaunted Blitzkrieg began to falter is a lesser and far more plausible claim. His focus is definitely more on the Commonwealth forces, but he does include Axis testimony.

As well as regular Wehrmacht troops and materiel, there are SS, paratroopers and, of particular interest to me (I'm not sure why?), Gebirgsjager. And the campaign is doubly or triply fascinating because, due to the interesting topography, all elements/arms are involved, for all belligerents, from the ground forces to the naval and airborne contingents. 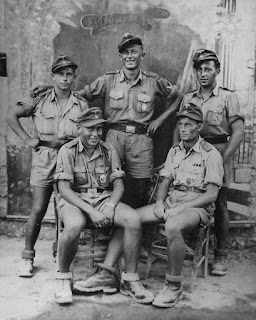 Gebirgsjager at rest in Greece.* 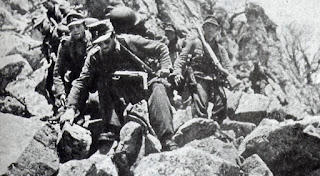 Gebirgsjager at work in the mountains, Greece.* 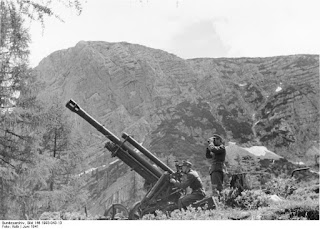 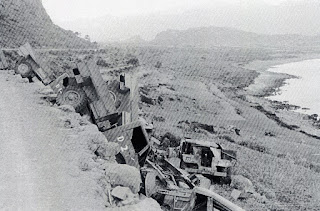 The fate of much Allied materiel, abandoned and destroyed.*

This is one of those books that poses a real danger to me, in terms of a desire to build wargaming forces with which to refight elements of it. If I were to go down this avenue, I think I'd choose 1/300 scale, or 6mm, so as to be able to involve air and sea elements, as well as land warfare, and also so as to include as much topography (mountains, coast, islands, etc) as possible. Uh oh...

A thoroughly enjoyable read. I'd definitely highly recommend this. 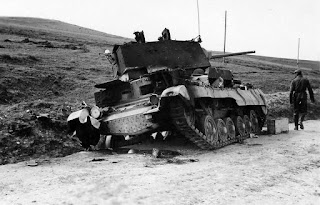 Most Allied A10 tanks threw their tracks, or broke down one way or another.* 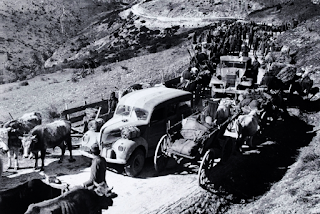 Retreat for the Allies and advance for the Germans was often hampered by poor roads laden with heavy traffic.* 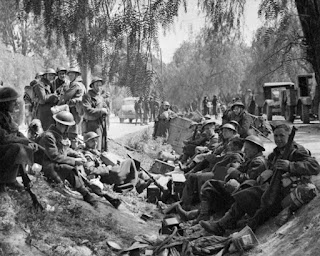 ANZAC troops take shelter whilst waiting to be evacuated.* 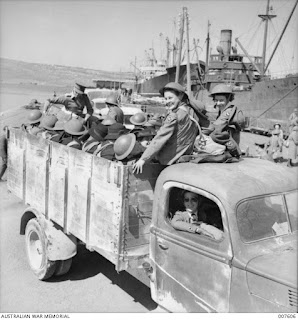 Amongst those rescued by sea, these NZ nurses.*

* I've tried as far as possible to use pictures in the public domain found online, that are not used in Plowman's book.

I suppose the image chosen for the cover (see top of this post) fits with the subtitle of the book. But as I say in my review, above, I think that's an attention grabbing overstatement. A much more representative cover image would've been an A10 that had been abandoned due to track failure! Indeed, I've a mind to make me a diorama of a scene depicting German soldiers gathered around the wreck of an A10 somewhere in Greece. That's a definite one for the the 'to do' project list!

[1] It was the actions of Mussolini's Italians that forced Hitler's hand in this theatre, at least as he saw it. But the theatre as a whole included Yugoslavia, Bulgaria and Hungary, and ramifications further afield meant that Crete, Turkey and all around the eastern and northern Mediterranean were affected by events on the Hellenic peninsula, as was Hitler's planned invasion of Russia. These other nations and their actions are often mentioned, as they relate to unfolding events in Greece itself, but don't come within the scope of this book.
Posted by Seb Palmer at 13:15