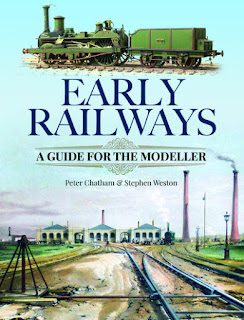 This is a bit off the beaten (railway) track for me, but it is about miniature modelling, and I have posted on here a couple of times before about railway related shenanigans. This handsome A4 hardback, by Peter Chatham and Stephen Weston, both of whom are involved in Parliamentary Trains' Ltd, a manufacturer of kits for this market, explores and celebrates the very early railways.

After a brief but interesting intro' to the subject, the chapters start with a profile of Mike Sharman, 'Pioneer Modeller of Early Railways', before exploring the subject itself in chapters entitled Infrastructure, Locomotives, Carriages, Wagons, Layouts and models, and Sources of supply for modellers. These headings tell you what to expect. 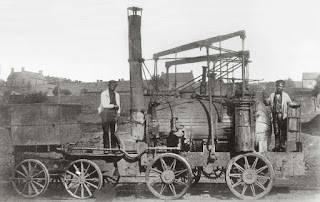 As well as copious diagrams, illustrations and photos, both in colour and black and white, there's a bibliography. One notable omission is a glossary. And the main body of text is clearly aimed at those already knowledgeable on the subjects of railways and railway modelling. So, to an interested layman like me, not yet embarked on railway modelling, some of the technical stuff was a bit opaque.

This is certainly a very attractive book, and because of that it's inspiring. There are lots of very beautiful period images, some being technical drawings, others adverts or other articles, illustrations, and even numerous early photographs. Some of the diagrams have been cleaned up a bit. And - I wouldn't be confident here, this being outside of my normal area of activity - it might even be possible to build some of the vehicles using the diagrams and other images here. 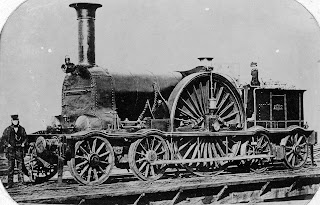 There are also plenty of pictures of models and 'layouts', the latter being the (usually workable) equivalents of the military modellers dioramas. These are clearly works of art and labours of love. The modeller of such things will also need to be a prodigious researcher! At roughly 120 pages, despite it being a luxuriant full-colour hardback, this is a but a brief taster on the subject.

At an RRP of £19.99 it's not cheap, but it's worth it for those interested in such things. And covering as it does a period of predominantly British industrial innovation (American and European stuff is also featured), in a period prior to that most railway modellers usually choose, it has some added charm. 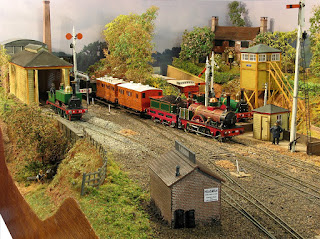 'East Grinstead', by Ian White, one of the featured layouts.