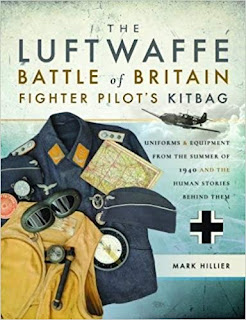 This is such a specialist book I almost feel it should score less on that account. But then again perhaps it should score higher for the very same reason!? In the end I went with my heart: I loved reading this and perusing the pictures. I would've given it five stars, if it weren't for the occasionally lumpen prose and too-oft sloppy (nonexistent?) editing. [1]

However, with that caveat, and half a 'star' [2] docked for those reasons, as I said, I loved this. Almost worryingly so. If I had the available funds I would definitely collect this sort of stuff. And I envy those, from whose collections many of these objects have been photographed, who can pursue such a pastime. 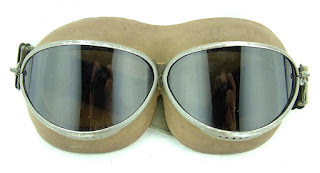 Why is WWII so endlessly fascinating? And why are the German forces, in spite of the toxic ideology they may have been fighting on behalf of [3], so seductively interesting? I think some of the answers to such questions can be found herein.

For one thing the Germans were admirably thorough, often producing better gear than their adversaries, as Hillier readily admits when comparing certain items to their RAF equivalents. For another they were meticulous, in terms of record keeping, ID'ing stuff, and so on. Being both thorough and meticulous dignifies anything, and also creates a great sense of both order and esprit d'corps. 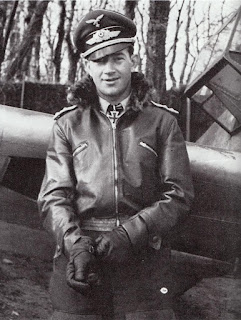 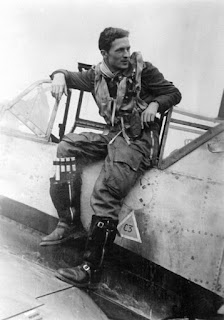 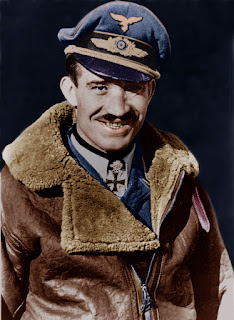 The latter is also enhanced by very stylish gear, and a 'knights of the [insert whatever branch of the armed services]' type approach. Images of handsome young men in knee length leather boots, in riding breeches, their jackets - often their own tailor made ones, and sometimes almost 'rock'n'roll cool leather ones - bedecked with medals, wearing silk scarves, and funky looking accoutrements, from headgear to harness, beside their steeds of the skies... it's a very seductive melange of ideas and images.

Sometimes there was a clash between form and function. For example, whilst pilots were allowed a lot of leeway in how they dressed for combat, regulations were eventually brought in to discourage the 'cavalryman of the clouds' get up, for the prosaic but very real reason that removing tight-fitting riding boots from badly burnt pilots was not efficient or pleasant. Issue boots, by comparison with the more glamorous but less practical riding boots, were designed with zips on either side. 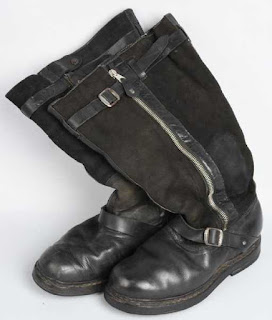 In some areas the Luftwaffe copied the RAF, for example with parachute harness design. But in most they were able to surpass British achievements. Very largely this was due to prior combat experience, in The Spanish Civil War, and the Blitzkrieg campaigns in Eastern and Western Europe. As a result of these experiences things like goggles, oxygen masks, parachutes and flying suits were all amended and improved.

The text is, despite issues already mentioned, very informative. And the pictures are a goldmine for those with a borderline obsessive interest in such things. I mostly model land based mini-military stuff. But this book will help me with pilot figures. And it's just fascinating in itself. 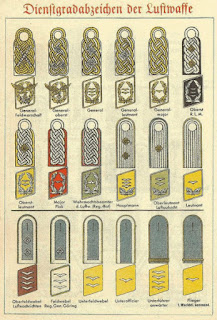 Rank insignia of the Luftwaffe.

And in addition to all the info on uniforms and equipment, there's a fair bit of biographical info, usually given in captions to the WWII era photos. The contemporary photos of gear, mostly from private collections, are terrific. So, very niche interest, and not perfect textually, but nevertheless a fascinating, informative and highly enjoyable read. I would highly recommend this to anyone interested in the Luftwaffe in WWII.

* In some posts like this I illustrate the piece with photos found in the book itself, in others, such as this, with images not in the book. 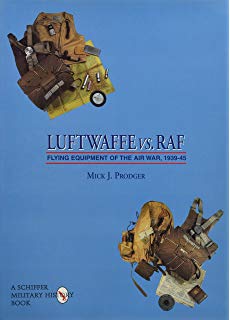 Hillier often refers to this book, which has a much broader remit.

[1] I'd like to stress that I'm always having to revisit my posts to edit clumsy prose and correct typos, etc. I've also worked as a columnist for a music mag, and suffered both positive and negative editorial interventions. My criticisms of this aspect - sadly something that bedevils parts of military history publishing (and probably many other special interest subjects) - are neither personal nor damning. I have great respect for all those who achieve publication in this field. And very much appreciate them sharing their effort and expertise!

I also wonder, every now and then - and this book might be a case in point - if it has actually been edited at all. As some of the errors, such as repeated words or phrases, or incorrect picture caption info, are very obvious.

[2] Okay, so I have my own balkankreuz rating system (for WWII; Boney's bicornes for Napoleonic!), not the usual stars. But I'm sure you know what I mean.

[3] Whenever I discuss German armed forces in WWII I feel it's necessary to mention that my interest is not ideological, and very emphatically not so in respect of Nazism. I also feel it necessary to reiterate that for many fighting in wartime, and I'd say this was very likely to have held for most Germans in WWII, they weren't necessarily ardent ideologues, but just people caught up in events beyond their control (and comprehension), who would ultimately be fighting for their country and their comrades more than any political or other type of program.