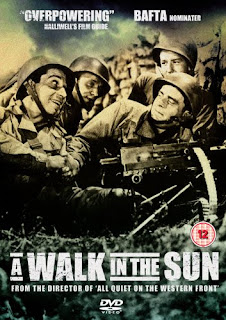 Made in 1945, this is a slightly odd movie, set in the Italian theatre of WWII, replete with baritone ballads [1], and lots of soliloquys, ranging from the dumb and banal to the quasi-philosophical.

The opening is presented in an old fashioned storybook style, followed by a quite unrealistically quiet and stable (i.e. no hint of rolling seas, sight or sound wise) amphibious assault scene. Picture quality in the darker opening scenes is pretty poor as well. But actually, I prefer this to those older films where supposed night scenes are clearly shot in daylight.

The basic plot is that a platoon of the Texas Division has been briefed to take possession of a farmhouse held by the Germans. The action comprises of the landing, subsequent air attacks, and the trip inland, with the risks of enemy contact, to reach and take their objective. Within this framework the drama plays out in the form of character development, which makes it quite compelling. 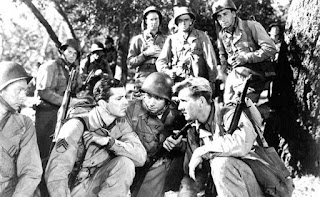 Tyne and Ward have a quick pow-wow, with Archie and Windy listening in. 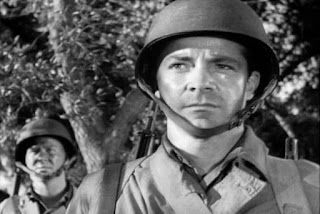 Dana Andrews is a good solid lead actor, and suits this role.

The recognisable faces are Dana Andrews and a young Lloyd Bridges, but there are plenty of other good characters. Norman Lloyd (who I kind of recognised*) is great as Archimbeau, or Archie, as is John Ireland as 'Windy'. The film is narrated by Burgess Meredith, whom some of us will know better as Penguin, or Rocky Balboa's trainer.

I felt the film got off to a shaky start, the ballads, poor picture quality, and the lack of realism in the opening scene all hamstringing it somewhat. But it gets better, quite good in fact, once the troops move off the beach; command soon devolves upon Staff Sergeants Tyne and Ward (Andrews and Bridges, respectively), as the soldiers work inland towards their objective, a German held farmhouse. 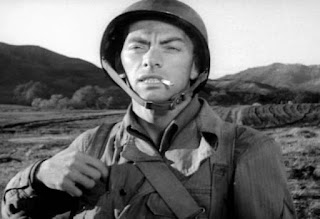 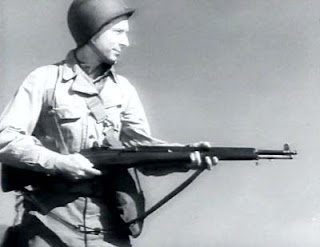 Like many war films of its kind, it's an ensemble piece, populated by a variety of characters.

There are the wise-cracking Noo Yoik buddies, privates Rivera and Friedman, who continually rib each other, and tease those they perceive to be hayseeds or dumbos. Porter is the Sarge who cracks up after replacement leader Lt. Rand is killed, and command proves too heavy a burden. Pfc. 'Windy' is the voice of philosophy, frequently soliloquising quite eloquently, often in imaginary drafts of letters to his sweetheart back home.

Whilst some of the characterisation is rather formulaic, and there are some annoying catchphrases and period lingo, the banter is actually better than average, with the soldiers mocking each other, sometimes to the point of bullying. It's the kind of macho banter that groups of men really do have recourse to, and feels entirely plausible. 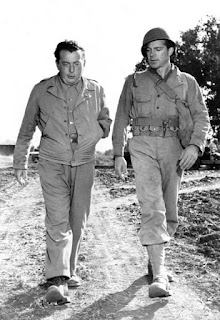 Once the movie hits it's stride (boom-boom) A Walk In The Sun proves to be a good film, capturing both the ennui of the downtime that comprises so much of wartime, and also the confusion and isolation, with the resultant difficulty of knowing what to do, when combat ensues. It also shows the fears, gripes, stresses and so on, that war naturally brings on.

As is typical of WWII flicks made during and for some time after the war, use is made of stock footage. And elsewhere budgetary constraints are suggested, when action is alluded to but only indirectly shown, such as the Axis air attack on the landing flotilla, early in the film. The use of US materiel mocked up as 'Kraut' armour is also a familiar disappointment of the era, looking as lame and unconvincing to us military history buffs as ever. 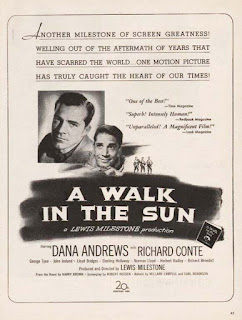 A contemporary ad for the film.

Aside from these more minor gripes, I found the only things that really jarred were the 'stirring' ballads, and the often rather strident orchestral soundtrack. But these things also contribute to a certain period charm. [3] Although I do prefer how Beach Red utilises a similar and yet somewhat different approach to the idea of the 'war song'. 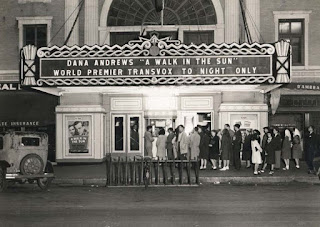 
A Walk In The Sun was selected, as recently as 2016, for preservation in the national US film archives, as being deemed of sufficient cultural merit. I'd go along with that. Not quite a classic, to my mind. But still well worth watching.

[1] The ballads, composed by Millard Lampell and Earl Robinson, are sung by Kenneth Spencer. Interestingly the composers were both left wing, and the singer Afro-American.

[2] Amongst Milestone's other directing credits is the original 1930 version of All Quiet On The Western Front.

[3] Soundtrack composer, Freddie Rich, was irked that Milestone replaced much of his score with numerous ballads. Test audiences weren't too keen on some of the ballads either, so some were dropped. It seems the music was the difficult issue with this movie!
Posted by Seb Palmer at 23:12

Email ThisBlogThis!Share to TwitterShare to FacebookShare to Pinterest
Labels: 1945, a walk in the sun, Dana Andrews, film review, German, Italy, US, WWII