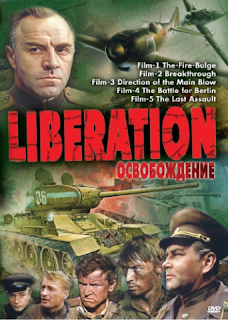 The DVD I bought on Amazon. 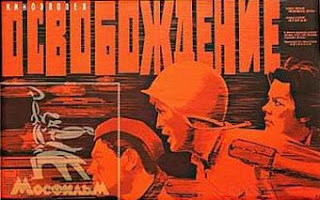 LIBERATION (Russ: Освобождение, Translit: Osvobohzdenie) I - The Fire Bulge, II - Breakthrough, III - The Direction of the Main Blow (parts I & II), IV - The Battle of Berlin, V - The Last Assault.

Wiki: 'The films are a dramatized account of the liberation of the Soviet Union's territory and the subsequent defeat of Nazi Germany in the Great Patriotic War, focusing on five major Eastern Front campaigns: the Battle of Kursk, the Lower Dnieper Offensive, Operation Bagration, the Vistula-Oder Offensive, and the Battle of Berlin.' 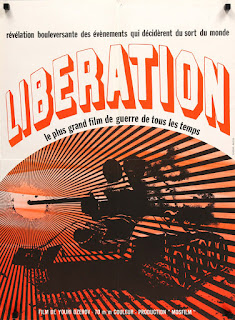 A rather snazzy French poster for the films.

I was made aware of these films thanks to a long time buddy, Dan (thanks Dan!), who tells me he saw 'Fire Bulge' - what a title! - whilst flying on a work trip. Kind of an odd in-flight movie! This was several years ago now: I googled it, and found it on YouTube, in Russian, sans subtitles. I found that version difficult, on account of the lack of being able to follow dialogue/exposition, of which there appeared to be rather a lot. But it looked mighty interesting.

Some years later, I decided to look again, only this time on Amazon. Lo and behold, the film was available, as part of the complete Liberation set; 5 films, all crammed into a single double-sided DVD! (As detailed at the top of this post.) There are succinct and reasonable synopses of each films'  content here, on the Wikipedia page for the series. So I won't go over it all here. 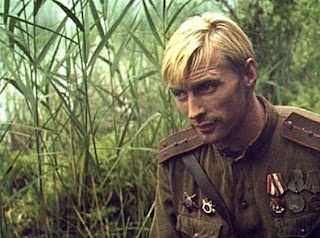 Tzvetaev is one of the main characters we follow through this epic..

On some levels this is pure Communist propaganda, so one has to bear that in mind whilst watching these films. But in many ways these are just fantastic war films. It's certainly a very welcome thing, in our global village, that we can see how Russia told its own story of what has to be one of the most apocalyptic campaigns of the previous century. 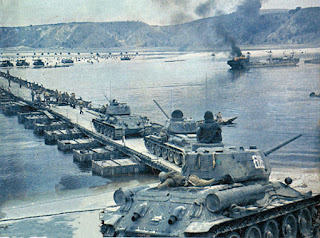 The set pieces are properly epic... 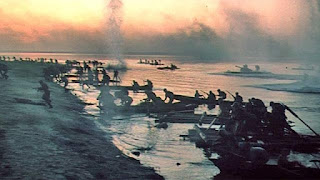 ... and sometimes even quite beautiful.

An official Mosfilm production, which involved the collaboration of the Russians, East Germans, Yugoslavs, and even Italy (Dino de Laurentis again!), the series is both enormously lavish, and highly expository - one can easily imagine it being played in classrooms, everywhere from schools to military academies - and nothing like the later independent Ukrainian film 'Come And See', which has a very specific focus on the horrors of conflict, as perpetrated in this virulently racist war for 'lebensraum'.

The Germans attempt to recruit a Russian unit from prisoners. [1]

So neither Nazi, nor, for that matter, Soviet atrocities feature here. And in fact portrayals of many characters of many nations, from Roosevelt to the Yugoslavian partisans, and even most of the Germans, seem pretty balanced and moderate. Indeed - aside from the ever-ranting Hitler - only Churchill seems to be blatantly viewed (and to some extent understandably so, given historical events) as something of an 'ideological enemy'. [2]

Mussolini meets Hitler, after being rescued by Skorzeny.

One point worthy of note is how incredibly good, particularly in terms of physiognomy, many of the 'world leader' actors are: the guys playing Hitler, Roosevelt and, most especially, Stalin, are dead-ringers. Churchill, as well as being the least sympathetically portrayed, is also the least successful face/body double. Even many of the secondary figures (generals, etc.) are close likenesses. As to the behavioural mannerisms, one feels one is dealing - especially with the perpetually ranting Hitler and the ever avuncular 'Uncle Joe' - with popular stereotypes.

Throughout the five films, we follow events on a series of levels, from top brass - the world leader sequences are in black and white for some reason - to operational and strategic (with much reference to maps and explanation of manoeuvres!), down to the tactical, i.e. the sharp end, where the lowly soldier faces the storms of steel. Artilleryman Tzvetaev (Nikolay Olyalin), nurse Zoia (Larisa Golubkina), and 'tankist' Dorozhkin (Valero Nosik) as  are all very engaging. Following their fates is compelling.

Tzvetaev in combat at the front, as Kursk begins. 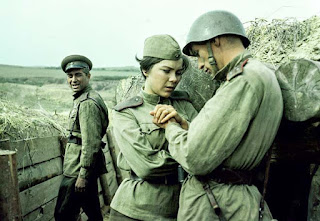 Having met Tzvetaev, we soon meet Zoia, a nurse.

All in all it's pretty amazing; starting at Kursk, the five component films follow the phases in which the Russians roll the Germans, all the way back to Berlin. No expense has been spared: the battlefields are huge, the materiél involved stupendous. One minor gripe is that they repeatedly dwell on this epic aspect, with lengthy fly-overs of various battle scenes. If you've seen Sergei Bondarchuk's Waterloo (or his War and Peace), you'll have seen something similar.

Apparently this is an IS-2, masquerading as a Panther. Pretty Poor!

Gear nuts will be both impressed to see fairly convincing faked up Tigers, and genuine German half-tracks, etc. But disappointed also, I imagine - I was - that sometimes (although captured enemy gear would be used by both belligerents) a lot more/better fakery wasn't achieved.

This was a colossal conflict, and these five films in one package represent an impressively colossal attempt to tell the Russian side of this utterly fascinating episode in recent history. Ok, it's didactic and propagandistic, but there's a lot of good acting, many characters we can genuinely take an interest in - from the groundlings to the demagogue dictators - and some incredible battles. 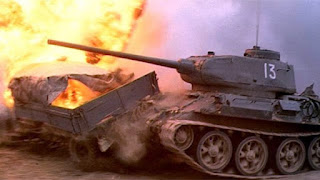 A T-34 charges across the battlefield.

There are lots of aerial long-shots of battles, like this.

This T-34 wants to join the air-force!

And not only does this series cover the Russian campaigns from Kursk to the capture of Berlin, but there are also numerous sub-stories, from the paratroop rescue of Mussolini, to the bomb-attempt on Hitler, or the Yalta conference, and the partisan war in Yugoslavia.


The English subtitles aren't perfect. In fact sometimes they're pretty hilarious! But having the film available in a form those of us who don't speak Russian can appreciate is terrific. Not perfect, but worth the full five balkenkreuz nevertheless. 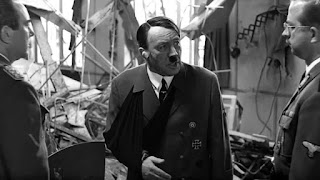 Hitler after the assassination attempt at the Wolf's Lair.

[1]  This is the only German camp scene. Considering what both Germany and Russia did to themselves, each other, and the hapless civilians in the war zones, this is omission is a biggie, but not altogether surprising.

[2] For example, Churchill is portrayed as pleased that the attempt to assassinate Hitler at the Wolf's Lair fails, fearing that a success might lead to Soviet dominance of Europe.

The view from a T-34 in combat at Kursk. 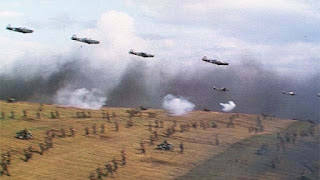 Clearly no expense was spared.

Tzvetaev in fighting takes cover behind an SdKfz 7.