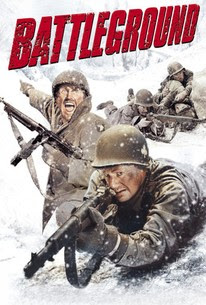 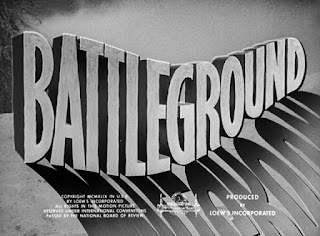 A classic period piece title still from the film.

Dedicated to the 'Batterered Bastards of Bastogne', Battleground tells the story of a small group of soldiers from the 101st Airborne, who wind up holding the strategically important crossroads town of Bastogne, a key German objective in their final offensive, known to us now as the Battle of the Bulge. 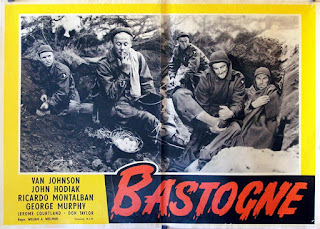 Looks like it was marketed under a different title in some places.


There are a number of familiar faces here, from genre movies of the era, some almost unrecognisable, as they're so young. The big name star is Van Johnson, who plays Holley, alongside such actors I did recognise as Richard Jaeckel, as Bettis, and Ricardo Montalban, as Rodrigues. But really it's an ensemble piece. I didn't recognise John Hodiak (Jarvess), George Murphy (Stazak) or Herbert Anderson (Hansan), but they're all equally good, being both believable and sympathetic. One of the standout turns, however, is James Whitmore as Sgt. Kinnie. 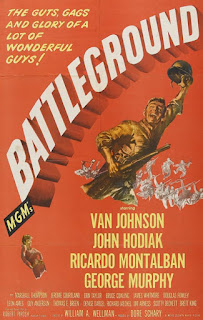 If you've seen Band of Brothers, this will be familiar territory. Partly that's 'cause the more recent HBO mini-series covers the same ground. But also it's partly 'cause this film is much grittier than most of a similar vintage. Indeed, one suspects that Band of Brothers might owe this earlier movie a debt, here and there. I'd certainly be incredulous if I were to learn that Hanks and co. hadn't studied this film as part of their research.

The film starts with two new recruits, privates Layton and Hooper, who've become buddies during training, arriving to find they've been assigned to different companies of the 327th Glider Regt, which in turn is part of the 101st Airborne. 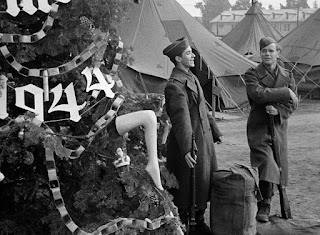 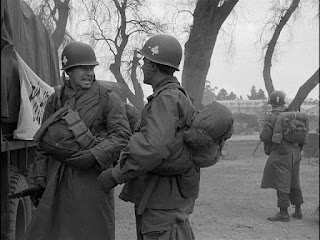 Bad news: all leave is cancelled.

About to go to Paris on a three day pass, everyone, newcomers and old hands alike, are pretty pissed at learning that a German offensive has begun, and all leave is cancelled. 'Pop' Stazak (George Murphy) is especially entitled to feel this way, as he's just found out he's due to be sent home to his family... as soon as the paperwork arrives. 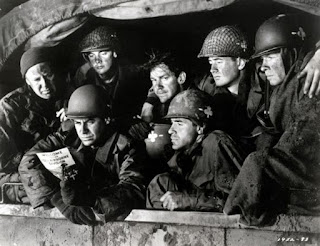 An ensemble piece, populated with flawed characters you grow to care for 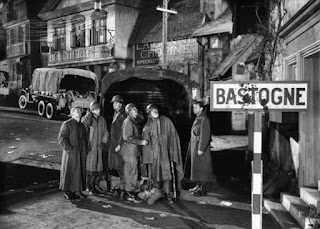 They were looking forward to Paris, but wind up in Bastogne. 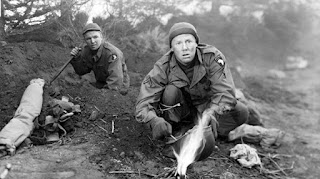 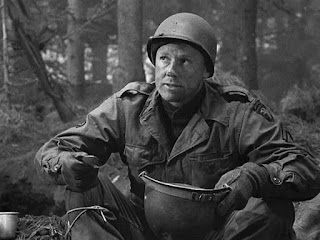 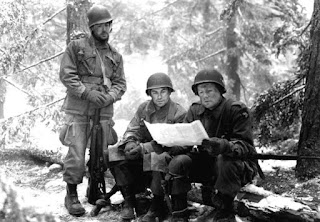 Newspapers from home know more about the situation than those at the sharp end. 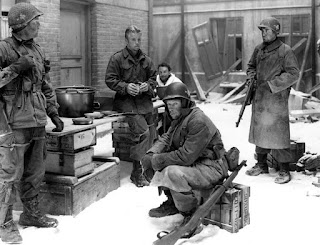 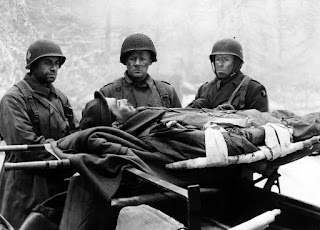 Watching buddies die, or get stretchered off the field takes it toll.

Layton finds it hard to be accepted by the old hands, and his initial experiences aren't encouraging. But eventually, mainly by just surviving, he becomes one of the old hands himself. Digging foxholes, hiding in the fog and snow, numbers are whittled down by constant bombardment and occasional contact. The men are turning into dishevelled tramps, contending with wounds, enemy infiltrations (some disguised as Americans), lack of adequate supplies, and foul weather. But, whilst they bellyache, or even plan ways to escape, their spirits are never truly broken. 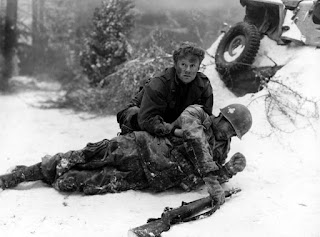 The perils of the patrol... 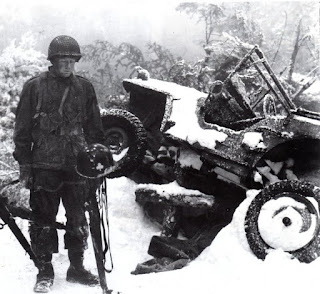 One less in the company.

This is a pretty old film now, and image quality varies, being quite grainy and poor sometimes. Actually this doesn't bother me, and almost helps the stock footage blend in better. There's also a mix of studio and outdoor filming. Funnily enough, this looks no worse than the equivalent tricks used in Band of Brothers.

Nowadays such war-weariness as is displayed here is a familiar trope, but back in 1949 this was notably more risqué. The main thing, however, is that the characters are sufficiently engaging, so we care about their fates. Not a classic film, quite. But solid and worth watching nonetheless. 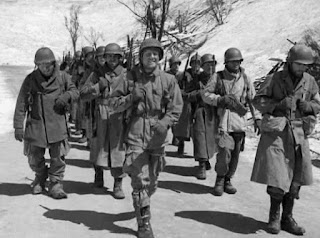 ----------
Compare the image below with the still above. Looks like someone else thought Whitmore's Sgt. Kinnie was the biz: 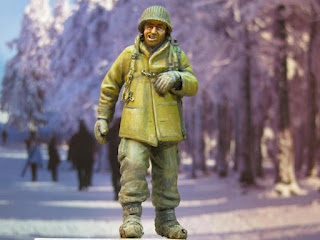 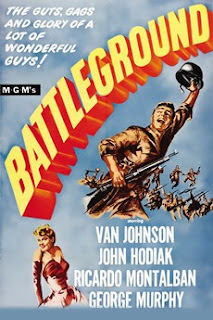 A more Technicolour version of the old poster.
Posted by Seb Palmer at 21:11