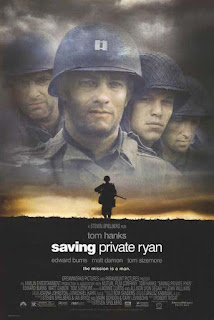 Saving Private Ryan has an excellent if unusual premise at its heart: in a scene in an office in the U.S, letters are being written and sent to the parents of soldiers killed in action. A clerk notices that one family, the Ryans, has four boys, all serving, three of whom have been killed. It is decided that the fourth must be found and sent home.

It's an excellent  plot, for both it's plausibility [1] (and, perhaps/paradoxically, it's implausibility) and humanity. And yet it's weird for contrasting the desire to save one life, amidst so much wasteful and indiscriminate death, at the probable cost of yet more lives. And it shows vividly how war itself and our relationship with it are very, er... conflicted. 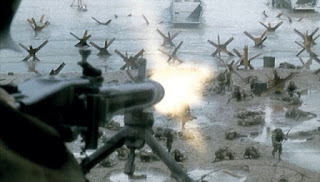 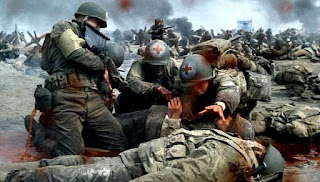 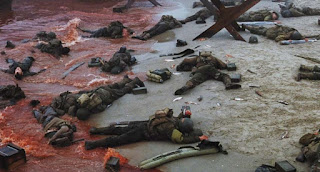 The sequence of pics shown above come from the legendary opening sequence of the film. The landing on Omaha Beach is a shockingly violent entrée to any movie, even one set in WWII.  Tom Hanks is superb, as Captain Miller, the man given the task of leading a small group of soldiers in search of the titular Private Ryan. 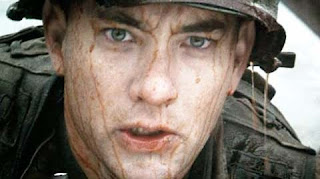 Miller's bloody baptism of fire in the landing is hardcore. 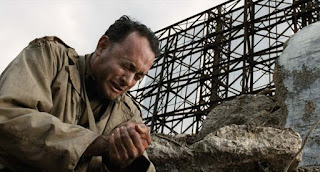 A strong leader throughout, Miller hides his pain from his men. But he feels it.

A stirring quote, from an American master of stirring quotes, Abe Lincoln, is used to bookend the movie [2], as are more contemporary scenes of the elderly Ryan visiting a US armed forces cemetery in Normandy. I won't say more than that regarding the plot, as I don't want to spoil the movie for anyone coming to it fresh. Suffice it to say that right from the opening scene the film grips you, taking you on an intense and thrilling journey. 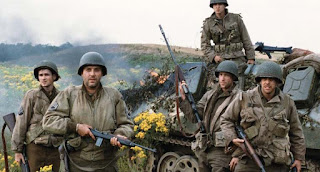 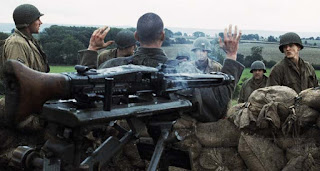 The authentic gear is very pleasing to the buff's critical eyes. [3] 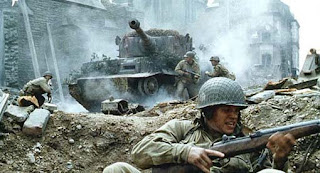 Private Ryan (played by Matt Damon) is eventually located, at the sharp end. 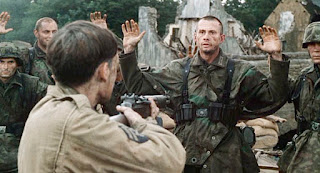 Upham's story within the film is very well handled. [4]

Everything about this film is extremely well done, from the meticulous attention to detail in terms of settings and uniforms, equipment, etc, to the superb direction and acting - Tom Hanks is particularly brilliant - making for a film that combines a serious-minded depiction of both the excitement and horrors of war with a sense of respect for history and an adroit gift for moving and exciting strorytelling.

In a word, brilliant! 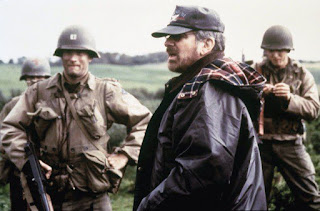 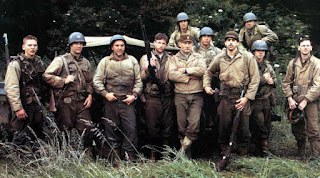 It's always nice to find something in the mini-military world we inhabit that relates to a film or a book. Whilst looking for pics for this post I stumbled across this: 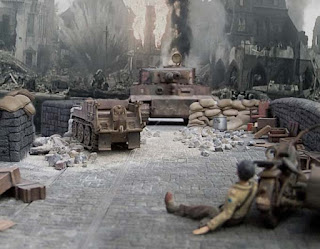 A pair of German model maker brothers built this diorama, based on the movie.

[1] The film's unusual premise is, as is often the case, based on something from the real world. In this case, the story of the Niland brothers. You can read about their story here.

[2] The quote is taken from the famous Bixby letter, written to a mother believed to have lost five sons during the ACW. 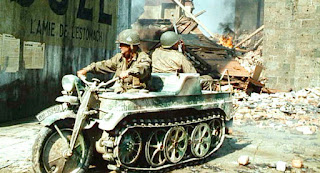 Seeing a Kettenkrad in a WWII movie is great.

[3] There's a notable clash in that the German gear is so painstakingly authentic, whilst the SS-skinhead look isn't. In the pics below, Spielberg's SS men have very non-regulation skinhead cuts, whereas the real McCoy go for a more normal '40s short back'n'sides look, more akin to what British soldiers of the time would also sport: 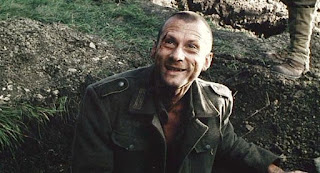 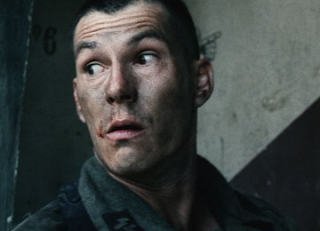 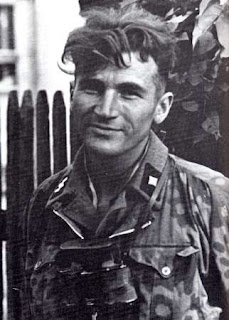 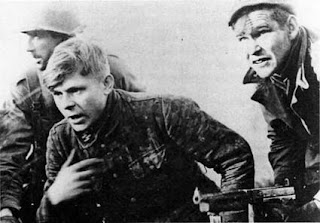 It might seem like, ummm... (hair pun alert) nit picking, but given the trouble they went to to achieve realism, such a departure does smell of a deliberate choice, with an agenda behind it. I think the skinhead haircut is chosen for it's brutal look. Certainly the SS were infamous for being the stormtroopers of Nazi ideology, and it's interesting that stories of SS troops executing US soldiers gave many Allied troops what they felt was the license to take pre-emptive revenge measures. To Spielberg and co.'s credit, such instances of Allied brutality aren't altogether glossed over. But giving the SS skinheads is misleading propagandism. And, personally, I think that taking such liberties with history is a bad thing. .

[4] Upham, well played by Jeremy Davies, is a cartographer and translator, without any combat experience. Basically a rear-echelon guy. Plucked from relative safety, he evolves from a mild mannered civilian in uniform, into a man who is prepared to kill.