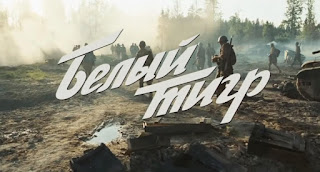 Wow! What an odd film that was.

I wrote this review some while back. The evening after watching this movie. And I must confess, it left me feeling perplexed. I wasn't always sure what I thought of the film itself, but, a few hours after the credits rolled, I knew that I'd been deeply impressed by the degree to which it got under my skin, and made me think. 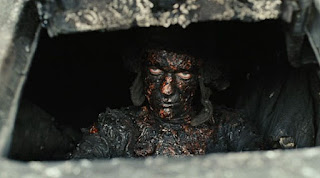 The 'Tankist' when discovered... pretty much fried. But not dead.

The bulk of the film appears to centre around a Russian 'tankist', who miraculously survives a German tank attack in which a seemingly invincible phantom white Tiger tank appears from nowhere, destroys a large number of T-34s, and then disappears. Discovered in his burned out tank, our 'tanker' is 90% covered with burns. Several times he's nearly passed over, as already dead or past recovery. But he miraculously recovers, unscarred, but unable to recall his former life/self. 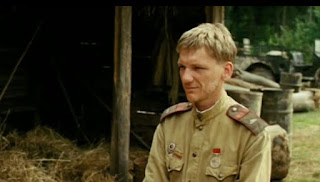 Miraculously healed, renamed, re-recruited, and about to be redeployed.

'Reborn' as Ivan Naydenov (i.e. 'Generic-Russki Found'), he's soon back in a tank. And before long he's selected to command a special prototype souped-up super T34, his mission; find and destroy this mysterious White Tiger. This develops into a bizarre supernatural angle, which is the first and most obvious thing about this strange film that sets it apart from your run of the mill war picture. Indeed, it makes it hard to categorise; I've seen this film variously described online as action, war, fantasy or thriller. I think a better description would be parable.

Naidyov, played by Aleksey Vertkov, in a perpetually calm state following his 'burning', claims he can communicate with tanks, or rather they with him. We first see this in a scene interesting not only for this oddball narrative turn, but because it depicts wrecked tanks that includes a lend-lease Matilda, as well as the expected Russian and German armour. 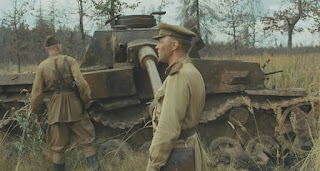 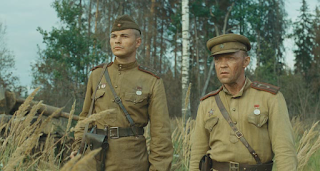 The Communist military machine, ostensibly anti-religious, inasmuch as Communism itself is purportedly so [1], unsurprisingly, has trouble digesting both the stories of an invincible 'ghost' Tiger tank, and what word of Comrade Naidyov's claims makes its way up the command chain. This aspect of the film culminates in what one might well read as a Russian riposte to the much longer (but no less mythical) American tradition, of the shoot out in the ghost town. Here Naidyov's T-34 does battle one-to-one with the elusive 'Belyy Tigr', the end of which duel I'll not give away, having already indulged in far more spoilers than I'd usually permit myself. 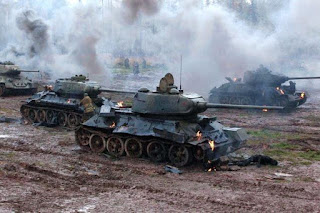 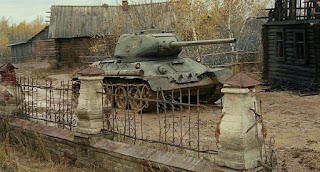 At this point the film rather abruptly changes scene and gear, shifting to the German capitulation, with, I think, Keitel, signing the unconditional surrender. Keitel, Stumpff, and another character, who are, I think, supposed to be, respectively, the heads of Germany's land, sea and air forces, then have a dinner together, and discuss, rather awkwardly, their feelings about the food. 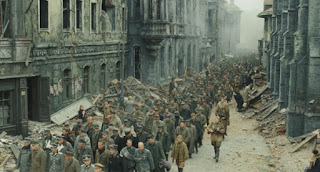 It's all over now. 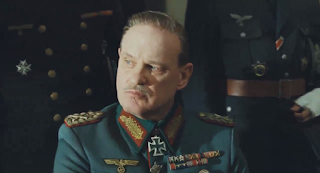 This abrupt departure from the front, despite the fields of battle being themselves somewhat odd, is not in any way signposted or explained. And then we're plumped back, about as abruptly - I say abruptly, but this film has a slow pace much of the time - into the war zone. Only it's no longer a war zone; Russian troops and German civilians watch columns of German soldiers being escorted Eastward into captivity. 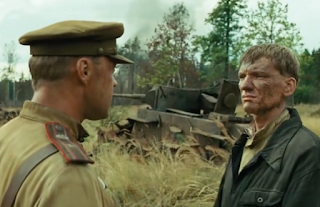 Finally, in the person of Major Fedotov (Vitaliy Kishchenko), an NKVD officer whose role renders him as an intermediary for us, the bewildered audience, we are reconnected with the original narrative thread. Fedotov visits Naidyev, who, as ever, is communing with his beloved tanks. In this case his own. Doing some maintenance. The exact content and outcome of this short scene, which is the key to unlocking the films more obvious metaphoric meaning, I'll leave unsaid.

Strangely, this doesn't feel at all like a film nearing its end, at this point. But it is. Only there's one more bizarre left-turn before the credits role. And this one, despite no references to supernatural tank type business, is perhaps the weirdest of them all: in a massive and very grandiose setting, Hitler explains his actions, reasoning, and vision of the future, to a shadowy character sitting opposite him, who doesn't speak, and whose identity is not made clear. 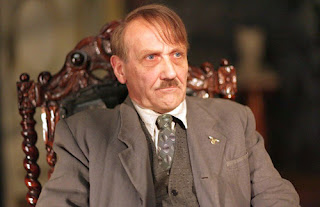 This last development hits the viewer powerfully, as we all know - or ought to - that at this point, in properly chronological narrative time, Hitler is dead. This is not a film that - up to this point, at any rate - has used flashbacks or a backward narrative. Giving Hitler, literally, the last word, is a daring, provocative, even shockingly powerful ploy. Once again, there's no signposting or explanation.

At surface level all this might be, or might appear to be, simply a resurgence of the old superstitious face of Mother Russia. Stalin himself rallied Russia around such ideas, in contradiction with the strict dogma of materialist Communism. And this is an aspect of this film that roots it in a decidedly indigenous Russian tradition. It's nowhere near as oddball-arthouse as, say, Tarkovsky. Yet it does have something of that dream-like quality. 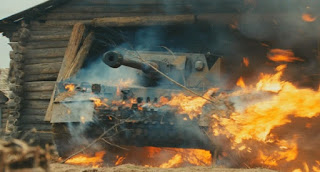 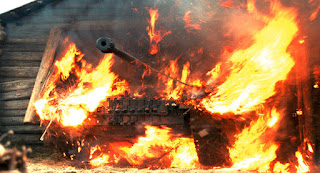 In stark contrast, it seems to me that, by and large, mainstream Hollywood style filmmakers attempt to make any meaning their films might have - beyond being product produced for entertainment - idiot-level obvious. Does director Shaknazorov have a higher regard for his audience's intelligence? Or is the meaning of this film, and in particular the key final scene, simply more obvious to Russian viewers? 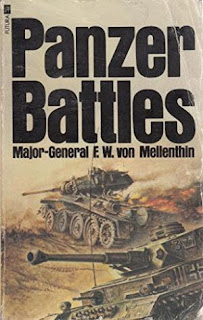 Panzer Battles, in the edition I bought (for 50p!).

Funnily enough I also finished the Eastern Front section of Mellenthin's Panzer Battles memoir the very same evening I watched this. In that book the German general concludes his post-WWII musings on the relation between Europe and Russia in a way that does make interpreting this final scene potentially much simpler and clearer: 'we require an indomitable will to protect Western civilisation from the clutches of the Soviet Hordes.' That sentence would slot into Hitler's final monologue in this film very neatly. 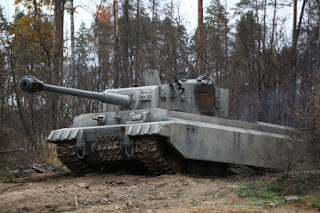 Spoiler alert: perhaps I shouldn't show this...  but...

The juxtaposition of supposedly irreligious Communism with ghostly tanks, and a living 'tankist' who seems more medieval than modern, and even the invocation of Darwin - here used in a very bizarre attempt to reconcile supernatural goings on with rational understanding, by inferring that the odd events depicted are simply a natural outcome of the conditions of war - are challengingly uncomfortable for me, a Westerner brought up as a Christian, but who has rejected all religious dogma. 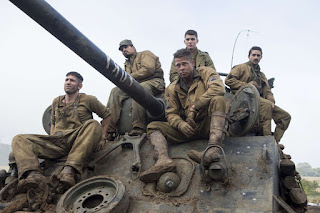 Fury this is not!

But, if one considers this film not literally, but as myth or parable, and we then start rooting around for readings and meanings, it does, I feel, get really quite interesting. One thing's for sure, this is an altogether different beast from Fury! And, strangely enough, although the latter never invokes such otherworldly ideas, nevertheless, White Tiger, for all it's mystical weirdness, is - rather bizarrely, perhaps? - on planes of a philosophical sense of truth, if not literally, a much more realistic film. 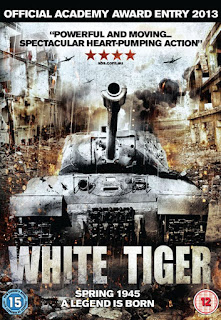 This is the cover of the DVD I bought. 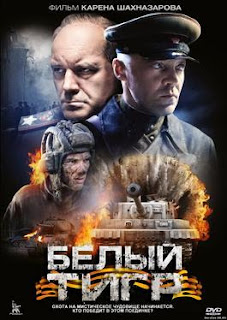 One of the Russian DVD covers.

Well, in conclusion, a mighty strange film. But very watchable and thought-provoking. It's well made, despite some oddities, such as Tiger that isn't quite what a Tiger should be (well, it is a ghost Tiger!), and some heavy Russian seriousness in the acting that Western viewers might find veers towards the hammy. But for the most part the actors are actually excellent. I particularly liked Naydenov himself, and his two crew members, Kryuk and Berdyev.

The action in the film is far from being the central or only point of the movie. But it is nonetheless excellent.  Of particular note is the sound the  tanks make when they fire. Especially so the white Tiger, whose gun going off has a powerful and yet menacingly spooky sound. Rating this was really hard. In some respects this is a five star film. But it's not entirely consistent, and it's so damn weird... so I settled for four out five.

I'd be interested to hear what others who've seen the film think!

[1] Like fascism, Communism has itself been likened to a religion, for its fervour, absolutism, and the rituals, orthodoxies and hierarchies (priesthood!) that go with it. And, just as in 1812, religion and superstition proved useful in fanning the flames of patriotism and nationalism.
Posted by Seb Palmer at 20:00