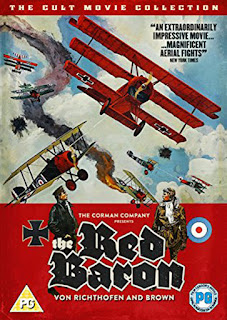 This is the version I have.

This proved to be a pretty enjoyable film. Directed by Roger Corman, more famous for his prolific output of B-Movies, it's a creditable stab at a more mainstream period/historical WWI dogfight drama. It was actually filmed and released as Von Richthofen And Brown. But has subsequently been re-released under the snappier and more obvious title, The Red Baron. 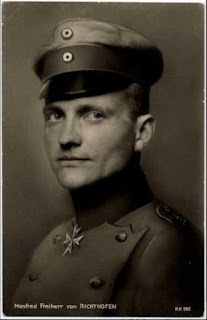 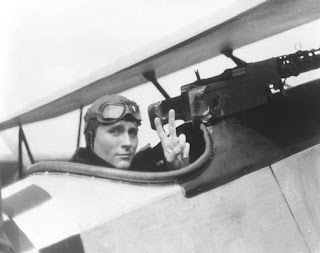 John Philip Law in the role.

This is also yet another war movie populated by actors I don't recognise, giving, by and large, very decent performances. [1] Or perhaps I should say very adequate? There’s a fair bit of wooden acting, and not a small amount of ham, at times, but not so much as to really spoil things. And the leads acquit themselves respectably enough.

As well as an obvious passion for the flying machines of this period - the Red Baron's colourful 'flying circus' stealing the aerial show - this film also focuses on themes related to the evolution of class cultures, and how this might relate to methods of making war.

The film starts with Richthofen joining the squadron of Oswald Boelcke. Scenes depicting his developing career are interspersed with scenes of his adversary, Roy Brown, who is portrayed as a rather surly disagreeable type, hell-bent on alienating his plummy British chums.

In this rendering of the story, or rather the popular myth, von Richthofen embodies the 'knights of old' idea - not only does he refuse to camouflage his planes, he goes the opposite way - see above pic [2] - making them more colourful and eye-catching, justifying his disobedience in chivalric terms - which is set in opposition to the down and dirty approach of (as this film has it) his nemesis, Canadian fighter pilot, Roy Brown.

I watched this with a regular war movie buddy, and right after it we watched an American (PBS?) documentary on the subject, in which the case was made that The Red Baron was probably killed by fire from the ground, and therefore not by Roy Brown, as was maintained at the tine, and as depicted in this film.

In this version of events, Richthofen is drawn into attacking a novice pilot Brown is trying to keep out of the fight. Ironically, Richthofen is coming to the rescue, in this film telling, of his brother Lothar. The way the films plays fast and loose with the historical facts, such as they are, or can ever be known or guessed, doesn't necessarily detract from the value of, nor the fun to be derived from, this film. 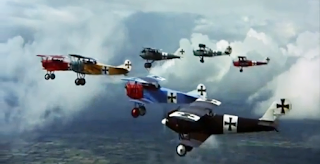 And anyway, as well as cogitating on myths vs. facts, we military gear buffs can also both enjoy the uniforms and equipment, etc, whilst critiquing it! Most of the impressive aerial combat is between British SE5s and German Pfalz D IIIs. Only at the end of the film do we get to see some of the legendary - and very cool looking - Fokker DR I triplanes, including the Baron's iconic red beast. 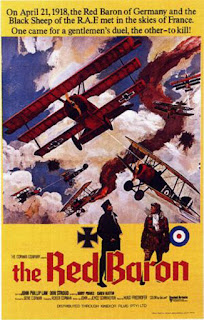 An older poster, from which the modern DVD cover (at the top of the post) is derived

The DVD Cover art, which is a rather handsome and evocative painting, shows Fokker Triplanes in a dogfight with Sopwith Camels, as indeed happened on that fateful day - his last day of active service, and only days before his 26th birthday - when Von Richthofen was brought down permanently. Sadly, what we actually get, as in The Blue Max [3], are the rather box-nosed SE5s, in place of the more attractively curvaceous Sopwiths. 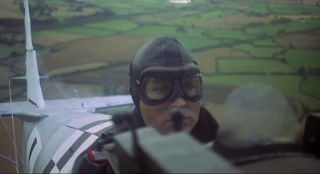 Aerial scenes were shot in Ireland. Doesn't look like the Somme, does it?

If I were to be critical, then I'd find fault more keenly with the backdrops to the aerial combat - only one scene attempts to integrate the aerial warfare depicted with the ground war that it took place over (and none too convincingly then) - as opposed to the fact it follows the old and contentious line re events.

What it does best, is recreate believable milieu for both sides, especially in terms of life (and death!) on the bases, in the air, and off duty, showing how the grim realities of modern mechanised war work against old-fashioned codes of chivalry. 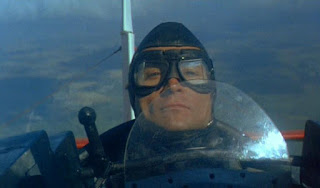 And the aerial combat footage really is quite something. Unlike many air war movies, this features footage that is clearly genuinely aerial filming of the key leads - perhaps sitting, miming combat, in the rear seat of a two seater, but definitely airborne. Films of this vintage that fake such scenes generally look rather lame as a result.

Anyway, whilst far from perfect, this is a highly enjoyable portrayal of a compelling and fascinating aspect of WWI.

[1] Well, actually, I did kind of recognise Law - it's hard to, with all his clothes on (and no wings): he's the blind angel in Barbarella! 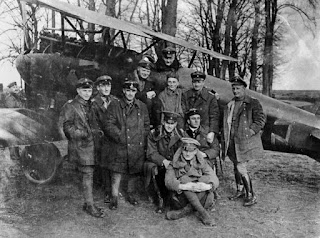 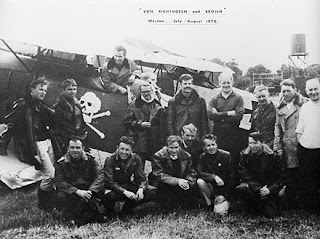 [2] Mind you, the colours and markings in this film aren't, like the story itself, entirely authentic. They're a kind of amalgam. But they still look very cool!

[3] In fact the planes in this movie are the same planes used in The Blue Max. One rather sad footnote to this later production is that during filming there were two serious crashes, one fatal, and the other seriously injuring two pilots.
Posted by Seb Palmer at 23:51