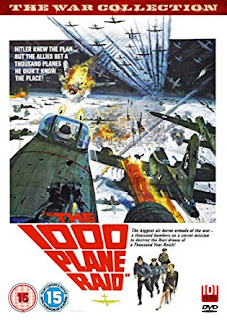 I picked this up, along with The Red Baron (1971), and Master Of The World (1961), all £3 each, with a Fopp voucher at the Cambridge branch of the now quite small Fopp chain. The plot basically concerns an American bomber group commander and his plan to try out a massive daylight raid against Nazi Germany, in the hope of dealing a 'knock out blow'.

Near the beginning of the film Col. Greg Brandon (Christopher George) nearly loses novice pilot Lt. Archer and his crew, when the bomber group is attacked. Fortunately a British Spitfire comes to their aid. But the brash pilot upsets Brandon. Back at base Brandon chews out Archer, and seeks retribution against the cocky Spitfire pilot. 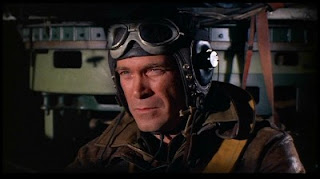 The 1000 Plane Raid belongs to that quite large domain of WWII movies starring B-list, or second rank, acting talent. Such films, if you'll pardon the bombing pun, can be quite hit and miss. This is not as good as, say, Decision Before Dawn, but it's better than some star vehicles. Anzio, with Robert Mitchum and Peter Falk springs to mind.

The plot is familiar, akin to 12 O'Clock High, with a hard-ass leader alienating his subordinates, overworking both them and himself. But, in the time honoured tradition of the iron-butt commander, really, underneath it all, his heart is made of candyfloss and marshmallows. 'It's just this damn war', and 'I can't stand losing any more men', is the sort of thing our stalwart will confide to his token love interest (Laraine Stephens, in this case). 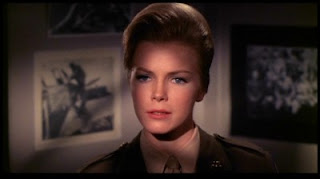 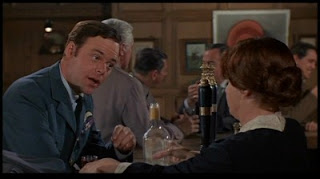 And the less well lit token man, or rather, token Brit.

The problems the allies were facing - the incredible inefficiency, not to mention indiscriminate barbarity - of night bombing, were very real. To use the title of another bomber related tale, they faced a proper old Catch 22: bombing in daylight was deemed unacceptable, on account of the likely losses to the attacking side, but then night time bombing was not proving to be the weapon its inter-war years apologists had prophesied.

In this film, rather as in the much more recent U-571, Americans gleefully rewrite history to their own advantage. In U-571 Bon-Jovi and pals capture an Enigma code machine from a U-Boat. The events that travesty was based upon were a far different British action! And in this movie, Col. Greg Brandon, of the US 8th Air Force, is credited with the idea of the first 1000 Plane daylight bombing raid. 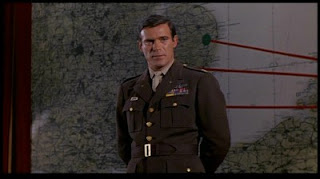 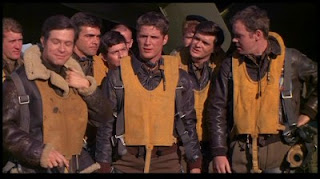 Lt. Archer, centre, the not so ugly duckling...

Allegedly based on a book by British ex-RAF man turned author, Ralph Barker, that book's title, The Thousand Plan: The Story of the First Thousand Bomber Raid on Cologne, reveals how the plot of the film, in which the target is a more ethically palatable war objective (a Focke factory), diverges from reality.

And not only was the target different, but it was a British idea, carried out by the RAF. And furthermore, as a read of Overy's enormous The Bombing War informs, bombing was, in reality, always a deeply inefficient 'blunt instrument'. Far from the precision instrument depicted here, or, even more ludicrously, in 633 Squadron. 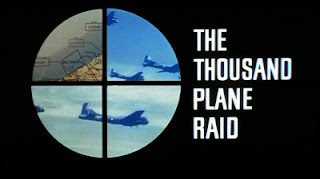 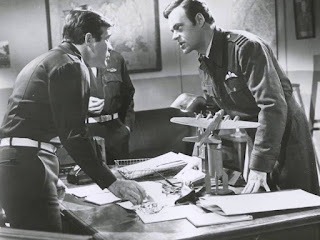 The film's in colour. But this black and white still is nice.

Having moaned about the historical innacuracy, I'd like to do a volte face, and admit that this film is, for all that it's an ahistorical pile of propagandistic cobblers, really quite fun to watch. I remember reading someone else's review of this film (here), in which they said that Oakmont, the production company that made the film, were good at delivering 'first rate entertainment on a second rate budget'. I'd have to agree.

As with so many postwar WWII films, stock footage is frequently used, and - as per the norm - not always exactly seamlessly. What saves the film is, chiefly, the charisma of George, and the charm and humour of RAF liaison officer, Wing Commander 'Taffy' Howard (he of the cheeky Spitfire rescue), played, very engagingly, by Gary Marshal. The script and direction also help, so that one grows to care for even relatively minor characters, such as the put upon chief mechanic who's later pressed into service as a waist gunner.

So, not much cop in terms of historical accuracy. But, as the title implies, a gert big dose of bomb-dropping movie fun.
----------
NOTES:

Whilst looking for pics online, to illustrate this post, I stumbled upon this.