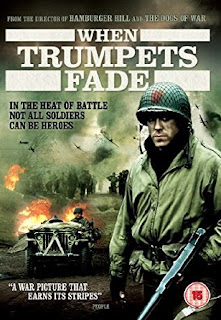 Set in the Hürtgen Forest, during the long and bloody conflict which raged over the winter of 1944-5, When Trumpets Fade is a made for TV movie from HBO NYC. It has the look, for the most part, production wise, of a proper full-on big-screen affair, which is impressive on the smaller budget TV films usually get. It also feels very real, overall, with lots of well rendered combat (and concomitant gore), good solid acting, and a refreshing lack of obviously synthetic looking CGI.

We're introduced to the central character, who's certainly not your typical war movie 'hero', Pvt. Manning, at the film's outset, as he carries a wounded comrade towards the rear, through barren, battle-scarred woods. This rather grim opening scene sets up the movie, which moves next to a bloody aid-station, where mangled, bloody corpses mark the thoroughfares in an otherwise uniform sea of mud, churned up by weather, traffic and shelling.

The film pulls no punches regarding blood 'n' guts.

It transpires that 'Manny' is the lone survivor from his platoon. A fact that earns him both accusations of shirking and cowardice, and, rather paradoxically, a battlefield promotion to sergeant. Trying to avoid this unsought for advancement, by appealing for a 'Section 8' (psychologically unfit for combat), he instead finds himself given charge of a squad of raw recruits. 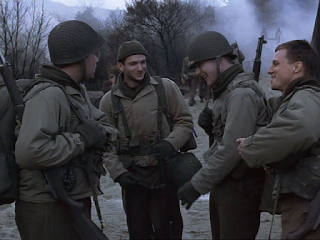 Fresh-faced recruits arrive on the line... 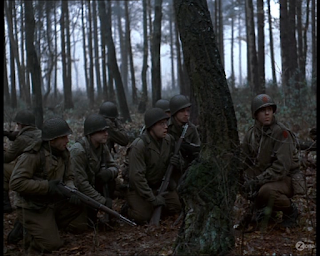 ... and are sent straight out on patrol, under the reluctant 'Manny'.

Their fraught first patrol makes up the first part of this film's real action. Manning's troubled position doesn't improve. And then things start to get plenty worse, for the sector they're in, as they come under heavy fire. The action is pretty full-on, and we're treated to a number of bloody and exhausting combat scenarios. I'll leave synopsising there, as I don't want to give too much away for those who haven't seen film. Suffice it to say it's both compelling and draining.

I really enjoyed this film a lot, watching it twice in a row (on two consecutive evenings). The dialogue and characterisation are much more straightforward and down to earth than many war films, a lot of which, especially American ones, suffer from the kind of gung-ho machismo that makes a film like Fury, frankly, rather ridiculous. 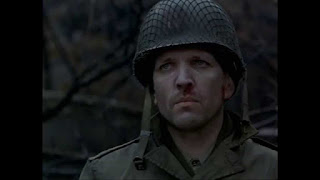 Capt. Pritchett is really put through the mincer. 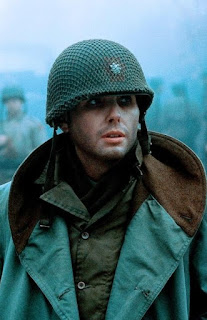 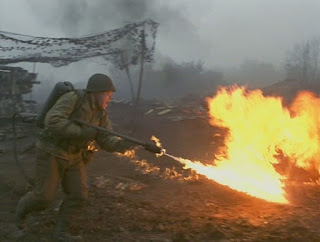 'Sandy' toasts the enemy, in the climax to a gruelling episode.

I didn't know Ron Eldard, who plays Pvt. Manning, prior to seeing this - I often prefer movies in which less than famous stars' reputations don't get in the way of the film - but found him very convincing. Indeed, I thought all the actors acquitted themselves very well. Only Zak Orth's Pvt. 'Sandy' verges a little towards caricature at times.

But he too was generally excellent, with his gonzo flamethrower scene making up for the goggle-eyed hamminess that had, initially, sometimes threatened his aura of veracity. Martin Donovan as Capt. Pritchett, and Country singer Dwight Yoakam as Lieut. Col. Rickman are both good as war-weary but staunch, strong leaders, whilst Timothy Olyphant (great name!) is convincing as a younger commander who cracks under the strain.

A worthy attempt at what assumes is meant to be a Pz. IV, but not good enough to fool the pernickety buff.

Likewise with the 88s.

Much of the gear looks convincing. Even the 88s, whilst neither the real thing nor exact replicas, look near enough. My only gripe in this department was that the German tanks were obvious fakes. I was also slightly troubled by the tactical scenario, with large numbers of US troops being shredded by nowt but two 88s and a few tanks. I've always got the impression, from my reading, that such admittedly formidable firepower was very vulnerable to infantry, if it wasn't defended by its own attendant infantry support.

Mainstream American films often assume - or so it seems to me - that the viewer's mental age is in single figures, heavily signposting anything less than totally obvious. Rather refreshingly, this film doesn't really do that, but instead suggests things, whilst leaving them unstated. I'm not sure I would go so far as to say this is a really great film. But it is a very solid and very enjoyable one, addressing a neglected area of the conflict, and treating it with due respect. 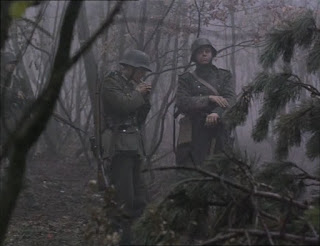 ...we feel decidedly edgy, much as the recent recruits no doubt did.