NB - Apologies for any formatting issues; Apple iOS blogging compatibility is pretty poor! Esp. when posting - as now - via iPhone or iPad.

Our new home has a very delapidated shed in the back garden. But rather than tear it down - we won't be able to afford a replacement for a good while yet - I decided to renovate and refurbish. 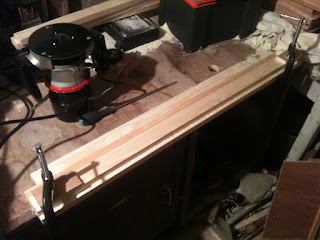 My rather primitive router set-up.

The first thing I started to work on were two new windows. Pictured above is my very simple router 'fence': timber clamped to the worksurface, with the wood to be routed screwed down! These first four cuts - the shorter uprights for the window frames - came out very nicely. 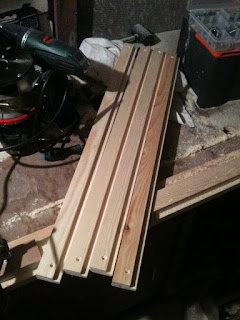 Next I removed the old door, which was rotten, and quite literally falling to pieces. I bought a 'new' door - solid wood (none of that horrid UPVC rubbish!) - from our local municipal dump, for £5! And collared a friendly local, asking them if they'd mind helping me get the door home. They agreed, kind souls!

I really love my little MX5, but it does present me with some logistical issues. I offered the old folks who generously helped me get the door back a fiver. But they wouldn't take it, and suggested instead that I give it to charity. Bless 'em! So I gave it to the poppy appeal guy at our local Sainsburys. 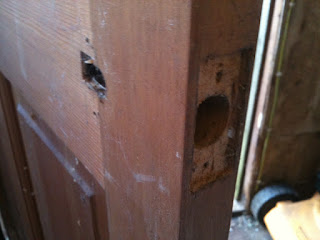 My £5 door, before surgery.

The lock and handles combo I bought wouldn't go into the pre-existing holes. Alas, my first attempt to reshape the area - rather foolishly without taking the door down - was an unmitigated disaster. I'd done this once before, when fitting new locks front and back, when we moved in. And I'd done it pretty well then, tho' I say it myself. This time it was godawful! 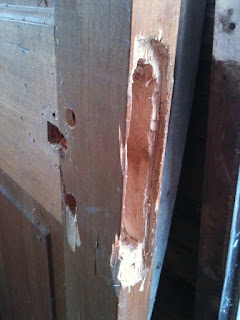 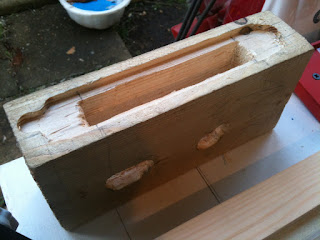 A chip or two (more like two thousand!) off the old block. 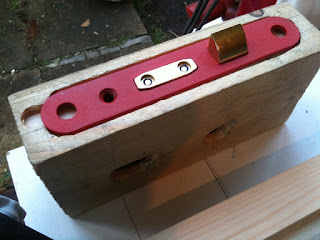 The lock in situ. Sans faceplate.

Having done all this work, I then discovered that my lock has no faceplate. It should have come with one in the pack, but it didn't. That's it above, nestled into the laboriously carved insert. I'm tempted to go ahead sans faceplate, only the two ruddy great holes on the lock itself are both huge and are not countersunk, presenting difficulties in fixing it. 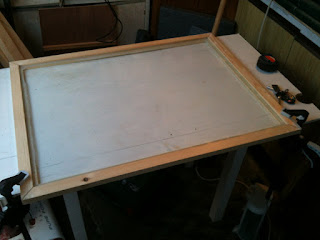 Window frame #1: clamped, glued, with the glass sitting on a bead of silicone.

So... having hit something of a dead-end with the door (which I'd already hung, to get the positioning right, only to have to remove it when my in situ carving went agley), I decided to resume making the windows. I'd abandoned them because after the first satisfyingly clean cuts, my attempts to route out the 'rabbet' on the longer horizontal elements of the frames was, initially, as disastrous as my first shot at lock-recess carving. 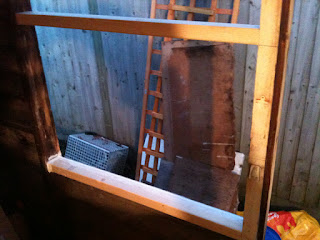 Reconstructing the window frame with 2" x 4".

Having started out by glueing and clamping the frame for one window, I then put a bead of clear silicone all the way around the recess, to receive the glass. The glass was a very tight fit, causing me some anxiety as I sought to get it bedded in. I probably put too much silicone on, as when I pressed the glass down it oozed out all over the place! Once the silicone had started to set I applied a bead of glazier's putty to the outer surface. Again, I put too much on, making it a very messy process when I tried to finish it neatly. 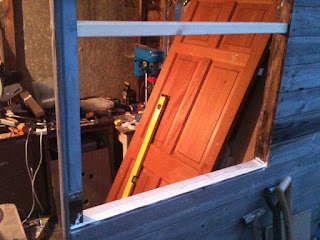 The new frame (and door, etc!) viewed from outside.

The next stage was to replace the missing cross-beams - the previous ones for the window I was working on had rotted away! - tilting the lower one slightly so that any rain or other moisture will run down and away, off to the outside of the shed/window. I also added some of the excess glazing putty I'd scraped off the window frame to seal a gap between the frame and the external wood cladding. 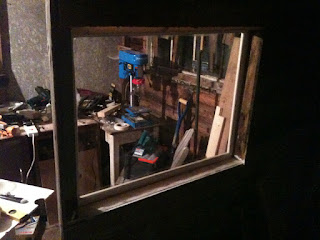 The window in place.

The dark stained verticals needed some planing to make them flush with the new inserts. The final few pics, one above and two below, are of the window seen at night. Above, looking in, and below, looking out. Tomorrow, as well as constructing the second window, I intend to add some more sealant, and paint this first one with some rain resistant outdoor paint. 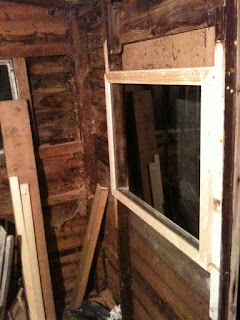 The new window, seen from inside the shed. 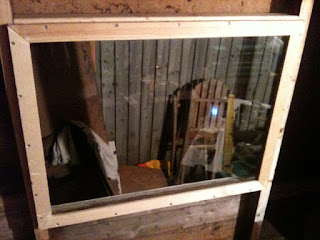 A second view from inside.

I've been getting into the annoying habit of flying by the seat of my pants, DIY wise, lately. With regard to the windows this has meant that I measured quite approximately for the lumber shopping, and then forgot to measure more accurately for the actual window manufacture.

The end result? My windows and their frames aren't a proper fit for the gaps they're intended for. Still, thanks to the new frame elements, I was still able to fix the window to the structure.

The last things I did, prior to taking night time snaps of the window in situ, were, clean the glass inside and out, which involved some trimming off of both the silicone and the putty, and add a strip of hardboard to the gap above the window, which would otherwise remain open to the elements.

I'm certainly going to need to replace some of the shiplap timber cladding, a fair chunk of which is suffering from both woodworm and rot, around the shed  as a whole!

Tomorrow: window #2, and the door!