NB - This post is rather out of sync, having originally been drafted months ago. It's just taken ages to get around to finishing and posting it!

Moving house has seriously interfered with blogging. We've moved from rented Georgian splendour to our own 'umble Victorian abode. Guess which is which: 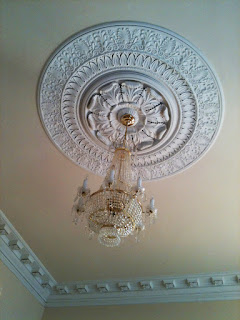 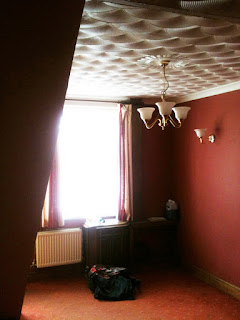 As well as the move itself, there's much redecorating to be done, and even some renovation. And the garden? Aaaargh!!! It was the Fenland equivalent of the Amazon rainforest when we moved in: massively overgrown and possibly quite dangerous to enter, only with very dull vegetation and wildlife - just the odd rogue horny-toad [1], and forests of brambles!

One odd thing that I noted during my recent absence from posting here was a massive - but sadly short-lived - spike in traffic to this 'ere wee blog o' mine [2]. I do hope people return in droves!? [3] Otherwise I'll feel I missed an opportunity... 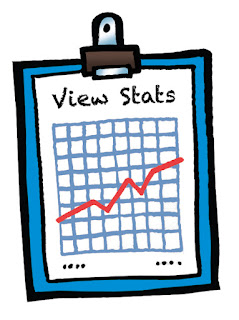 Moving into The Fens is, as alluded to above, a kind of mutant-homecoming, of sorts, for me (if not perhaps for Teresa). But, swiftly leaving that topic on one side, I was amazed and very pleasantly surprised that the very weekend we moved in, March - our new home town (not the month!) - was host to a 1940s themed event.

The posters for said show made it very obvious that the military aspects of the '40s would be central to the event, with re-enactors, vehicles, and even a Spitfire fly-past. Cool, methinks. March is shaping up to be my kind of place!

When we got there I was a trifle disappointed there wasn't more stuff of the sort I was looking for - WWII German uniform apparel, basically. Nevertheless, although there wasn't half as much as I'd hoped for, there was some. I bought a German officer's hat, a green military style shirt (of no obvious affiliation), and sundry other bit and bobs, inc. some vintage mags for the Mrs.

Here are a few pics from that March event: 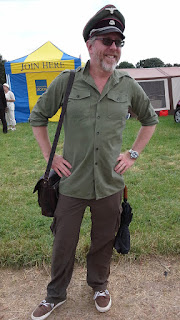 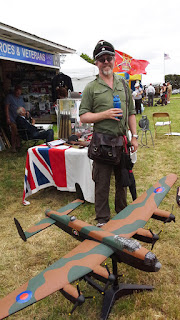 I've subsequently discovered that I was perhaps overcharged a little for my Panzer officer's 'crusher cap'. But I love it, so what the heck. It's a replica, by the way. [4] I think the guy that sold it to me may have suggested it was an SS Panzer officer's hat. The pink piping means it certainly is Panzer-crew. However, another stall-holder (at a similar event in nearby Ramsey, only a few later) said that the 'death's head' badge doesn't equal SS per se... so I'm confused now!

Anyhoo, as already mentioned above, less than a month later, there was a similar but even bigger event, just outside the nearby town of Ramsey. Here's a pic from that show: 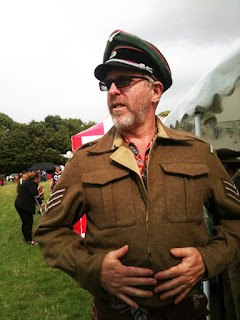 A confused outfit that would almost certainly distress many a fussy re-enactor.

I didn't get the 'Dad's Army' style Home Guard sergeant's tunic. I really wish I had! But the Mrs sagely suggested that the post-purchase cash-flow rather mitigated against such spur-of-the-moment outlays. There were also a great pair of WWII SS oak-leaf camo' trousers that I'd really like to have bought. Maybe I'll have opportunities to get these at other similar shows? I really don't want to have to wait a whole year to do so!

Several things I did feel I could run to were: a replica 'potato-masher' grenade, some vintage Commando comics (nostalgia bites deep again!), a couple of Osprey titles, and firing two clips of 'BB' ammo on a mini shooting range. I fired a replica 'broom-handle' Mauser first (pictured below), followed by a replica Luger. My shots were at least more or less all on target, if not hyper-accurate. These replicas fired pellets, not bullets. But, Gott in Himmel, it was fun shooting them! 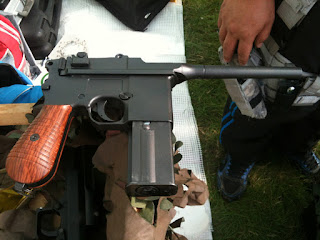 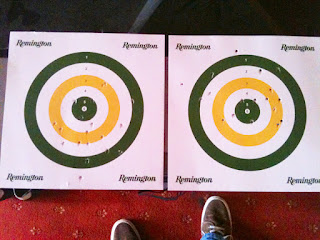 My two clips of ammo: left was the Luger, right, the Mauser.

I enjoyed both shows. And I've definitely got the '40s bug (perhaps, being in my 40s myself, I'm particularly susceptible?), both civilian and military. I have to admit I found the re-enactment odd, albeit still enjoyable. It didn't seem very realistic, with 'marshals' wandering about (I think they were supervising the explosions), and the large contingent of overweight or overage re-enactors, all of whom (whatever their age/weight!) generally behaved very much as if they were safe in the knowledge it was all just dressing up for fun.

But who am I to criticise that? Especially as I've definitely contracted the dressing up for fun bug. I plan to gradually acquire a British WWII outfit, poss Home Guard, and lots of German gear. I'll probably just wear such stuff around the house, especially when engaged in my military hobbies, or to shows. Outside of those activities... hmmm!? Probably best avoided, esp. the 'Jerry' stuff. People might get the wrong idea!
-----

[1] It transpired I wasn't the only priapic web-footed creature in the undergrowth!

[2] That's wee as in small, as opposed to wee as in micturate... obviously!

[3] Droves are, we've discovered, plentiful in the fens, if not of the kind I'm after here.

[4] My mum was somewhat relieved to learn it wasn't a genuine WWII Nazi's hat. I think, bless her, that she was worried that if it were, it might, whilst sat atop my noggin, somehow infect my brain with an aura of evil!
Posted by Seb Palmer at 20:42