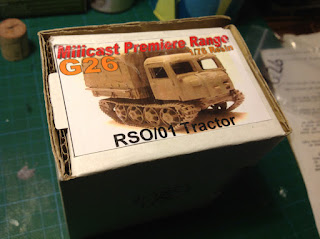 I went to Vapnartak, in early Feb (the 7th?), 2015, managing to combine a visit to meet a hero of mine - figure sculptor extroardinaire Antony Barton - with going to a show I'd never been to before. Tony Barton's figures are of course legendary. I have a pitifully small amount of his Napoleonics, in 15/18mm, and I've been getting into the idea of collecting his 20mm WWII miniatures as the core element, figure-wise, for my burgeoning WWII 20mm force.

I noticed that Tony sculpts his vehicle related crews to fit actual models (with the vehicles to hand). I mention this because it appears not all makers of figures do so, a point that becomes pertinent in the building of this model. Milicast vehicles come in card boxes, as pictured at the top of this post. The picture of the models is a plus point. Though I have to say I'm wondering, having built the kit, if this is actually a picture of a prototype or master, as opposed to an assembled kit. The track detail looks a lot better and cleaner on the pic than it does on the kit itself. 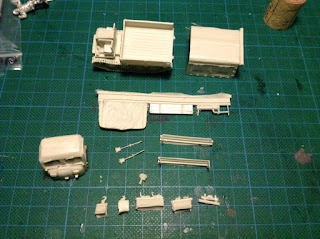 Pictured above are all the component resin parts, as supplied. And below, the instruction sheet. I have to say that the instruction sheet is, in my view, woefully inadequate. I'll have to check this, but as I recall, the sheet doesn't actually list all the parts, and is quite poorly printed, making reading and following the instructions tricky in places. 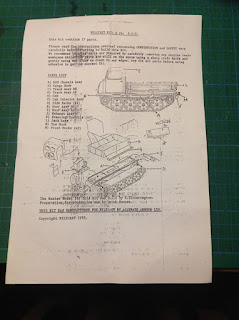 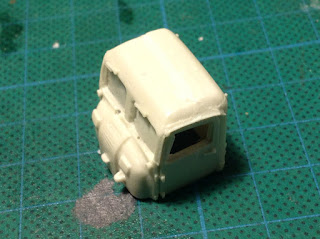 The back of the cab has tools moulded in place, and yet two more spades are supplied (see above kit contents pic). This seems a bit odd. But its welcome enough, as the two separate spades could prove to be useful elsewhere. 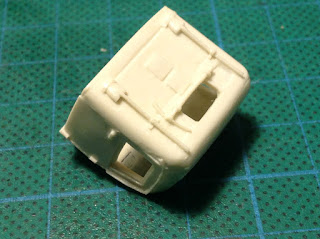 The detailing of the cab is okay, if perhaps rather coarse. The two main front windows need cutting out and cleaning up; there are also two little holes just below the windows which might just be air bubbles. These ought to be filled in, I guess. I think I just ignored them! 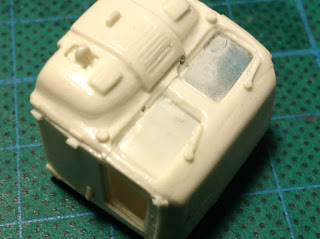 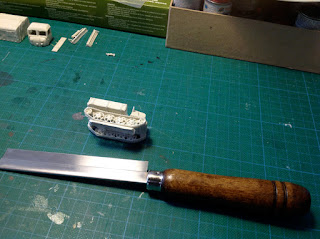 I hadn't acquired a 'razor saw' as yet, but having large chunks of resin to remove, my Milicast acquisitions prompted me to do so. I can't recall where I got this one, or what I paid! But it does the job admirably, and that's all I need to know for now!

Pictured below, the vehicle has now got a few parts in situ: the binary steering arms (the RSO had independent track control), the rails or racks on the left and right side of the rear box, the jack, and the exhaust. The tow bar fixture was rubbish, with the male part being way bigger than the female part, and consequently the two need fiddling with until they can be joined. 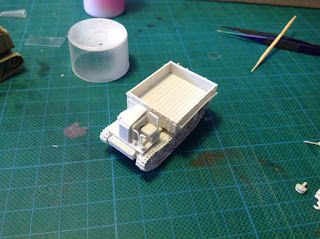 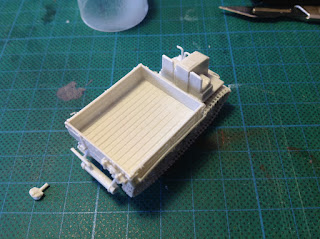 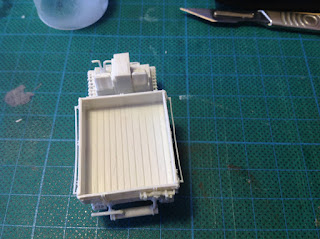 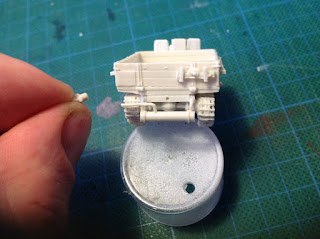 In the picture below the cab is being undercoated, and panes of glass are being simulated by cutting up some transparent plastic sheet I have a reasonably abundant stock of. In some instances I might try and fit the 'glass' as tight and snug inside the profile of the opening as possible, i.e. not simply slapping an oversized part behind the opening.

But the shapes and texture of the surfaces of this model are so irregular that I decided to try and flatten them a little with files and sandpaper, before going the simpler 'slap it on the back' route. The only exception to this was the smaller rear window, which I took some trouble to fit in the more laborious manner. I was sort of forced into this, a there wasn't sufficient clearance between the seats and the back of the cab to use the simple 'slap it on' method for this window! 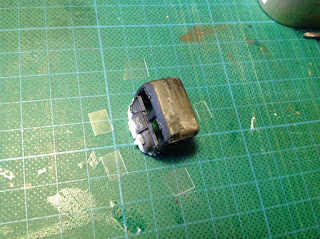 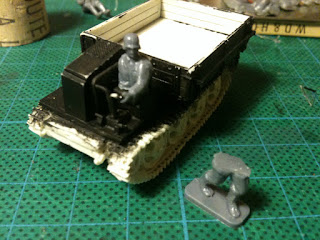 As already alluded to, albeit indirectly, near the top of this post, a driver was always going to figure in this build. I tried several figures that are intended for use as drivers, some from the Plastic Soldier Company (too big, but then they are 1/72), and some by milicast. As the pictures below demonstrate, the Milicast figure - and I have about 10 Milicast driver figures - was way too big. The one I took the pic of below was the nearest to a fit, but - although he was the only one whose legs/feet would fit - he was both too wide and too tall.

I suspect the Milicast drivers have been sculpted without reference to any actual model vehicles. So far they haven't fitted in anything I've built, excepting very open spaces, such as the PSC Sd. Kfz. 139, Marder III Ausf with Pak 36(r), and that's a 1/72 kit, whereas these are supposedly 1/76 figures! It's interesting to note that the two driver figures for the Kubelwagen that comes as part of the Airfix Reconnaissance Set, which, whilst rather oddly posed do at least fit the space they are intended for, are both truncated (lacking complete legs/feet) and noticeably smaller than ordinary 1/76 figures. 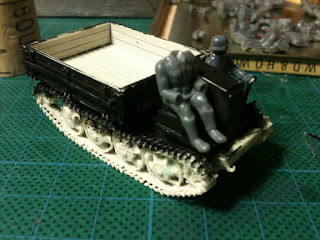 This headless and handless 1/72 PSC driver
is clearly way too big! 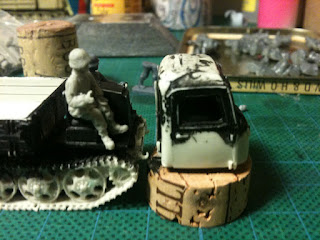 One of a set of Milicast drivers I purchased at Vapnartak
when I bought the vehicles. This was the closest to a fit,
but he's still both too wide and too tall! 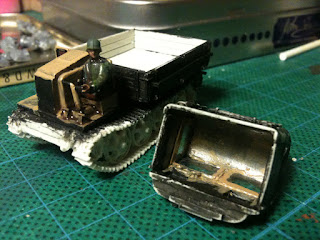 The figure I eventually found and used is a flamethrower from a pack of Airfix 1/72 German WWII infantry. It's odd, isnt it? that they make their vehicles in 1/76, and their figures in 1/72! I had to amputate the poor blighter's right arm, and both legs, and carve away the flamethrower. But in the end I was pretty pleased, as I was able to open up his left hand (by removing the firing tube of the flamethrower), and, with some judicious sculpting of the lower hip area and a fair bit of wiggling about whilst gluing, I managed to get him to appear like he's handling the controls whilst looking off to his left, perhaps about to make a turn? 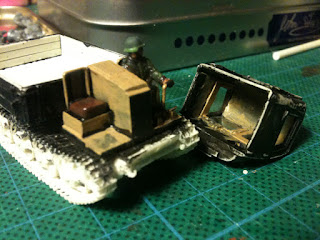 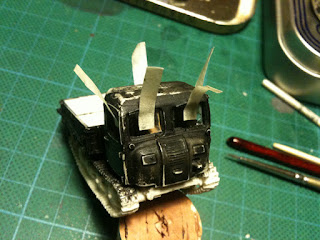 Another new departure for me, based upon yet another new acquisition of modelling materials - this time liquid masking fluid - saw me creating masks for the window panes, complete will 'pull to remove' tabs, fashioned from Tamiya masking strip. The idea is that you can then paint the body work, and, when done, pull the tabs, and, presto! remove the masking. Hopefully to reveal a nice clean divide between paint and clean/clear 'glass'! 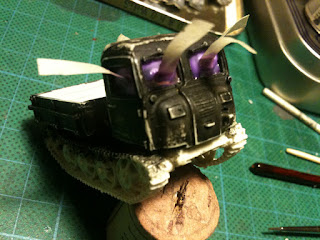 In the last few pics you can see the RSO primed in a Matt black undercoat, both without and also with the rear canopy. Some very nice example of this vehicle are out there on't web, some of which have the rear area partially covered. I'm not sure what I want to do about the stowage area yet! I'll decide when I come to the final painting stage. 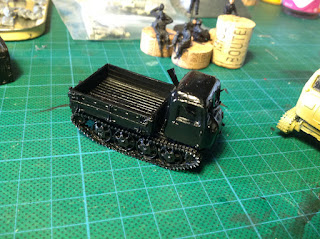 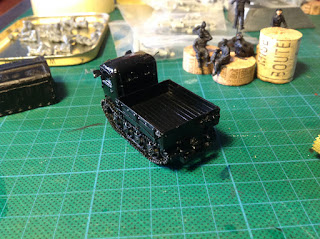 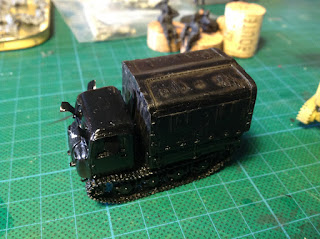 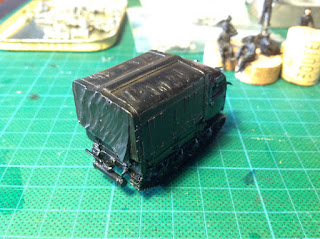 Well, I'm not exactly blown away by Milicast vehicles - I also bought a Bergepanzer IV kit, and I haven't felt that inclined to make a start on it, after this model - despite Antony Barton's endorsement of them at Vapnartak. At the time of the build I have to confess I really didn't like this particualr model very much at all. But looking back at it now, I reckon it's okay. But I certainly don't think it's very good value for money. For the level of coarseness of detail, and the ill-fit, or misshapen parts, etc, it really ought to be, in my view, a lot cheaper.

And then there's the fact that the driver figures I bought, also from Milicast (with an express mention of the desire to use one of them as a driver for the RSO), don't appear to have been sculpted with any specific vehicle models in mind. As mentioned above, so far they've not fitted in any model I've made. Whilst the Ace RSO I built had issues of its own, it was nevertheless a far superior kit, all things considered; much crisper and cleaner - despite its own ill-fitting part problems - it is far more detailed, and just generally more satisfying. What a pity that their RSO/01 is discontinued! 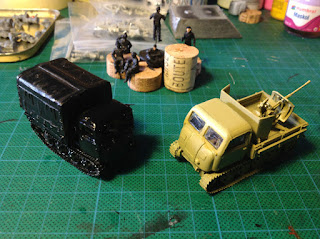 The Milicast is at left, and the Ace is at right. Not a fair
comparison pic, I grant, with the Milicast still only
undercoated in black!