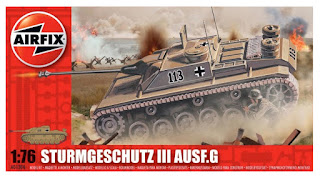 This is my second Airfix Stug III, Ausf G. It's not the greatest kit, suffering from quite a lot of flash, lots of missing elements (no tools or fire extinguisher, etc.), and with some fairly significant 'poor fit' issues (the upper and lower parts of the hull don't join particularly well). And of course there's the delightfully ungluable rubber band tracks!

Nevertheless, this is a venerable aulde model - vintage 1962! - and despite its issues, it's a pleasure to build. Picking one up for just £2.99, new, I just could'nae resist! It's funny: I'm posting about making this one before posting my first build of this olde model! Never mind, I'll hopefully address that in time.

Construction starts in the traditional manner, with the running-gear. The detailing of these parts is not particularly good, many shallow depressions around the road wheels, for example, representing what should in fact be holes. Then the lower hull goes together, and then - after beginning the gun assembly by attaching the gun to its mount and the mount to the casemate - you pop the (ill-fitting) halves together. 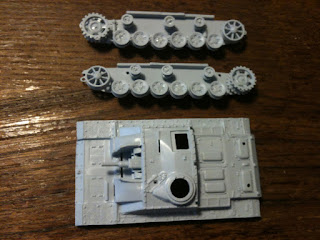 Detail is then added to the casemate and body of the vehicle. The hatches are supplied in such a way that suggests you can model them open or closed. Indeed, I did model them in the open position last time I built this kit. However, internal detail is non-existent, so I did them closed on this occasion. I also attach the spare tracks at this point, which is earlier than is suggested by the instructions. The instructions also direct you to attach these to the left and right vertical faces of the casemate. As this will obscure the vehicle numbers and the Balkankreuz, in both instances of making this kit I have instead attached them to the front and rear of the hull.

I cut off the rather too fat aerials (to be replaced with stretched sprue or wire later), and trim the two pillars that hold the spare wheels, adding scratch-built circular plates 'holding' them in position. This latter detail on my last build was a very early example of my recent attempts at scratch-building, and was executed in a rather coarse manner, looking at it now (esp. when seen against better quality kits from other manufacturers). 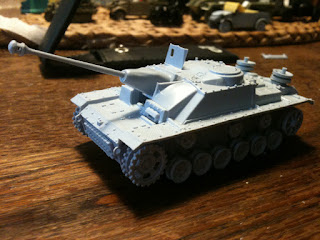 I tried supergluing the tracks, using both ordinary liquid superglue, and also a gel variety that I've recently bought. I believe I used ordinary superglue on my previous build of this kit, and I think that it worked on that occasion. This time neither type of superglue worked! The first, the liquid type, was left to set for about two or three hours; when I came back to the model, the tracks simply came undone as if no attempt to bond them had been attempted!

My second second attempt, this time with the superglue gel, was left to set for approximately ten hours (overnight). Still no dice! The glue had set solid alright, but had in no way adhered to the plastic! The eventual solution was to heat the tip of a flat-head screwdriver, and use that to melt the male parts across the counterpart female openings. What a palaver! 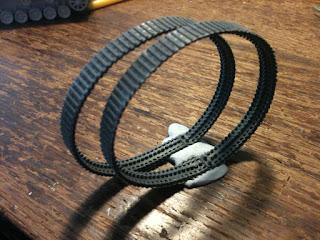 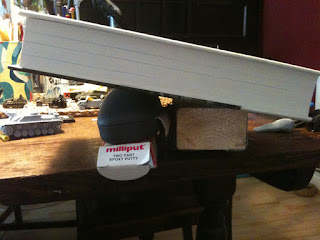 In the picture shown above, the tracks are held in place with Blue-tack, in exactly the same manner as on the first attempt; then tweezers were laid across the joint, each 'arm' of the tweezer across either side o' the 'male' and 'female' nubbins and gubbins, and then finally weights were added to keep the whole shebang in situ overnight. Still didn't work!

I plan to jazz this vehicle up with some extras, such as a stowage frame with a whole load of junk in it, and elsewhere. But that'll be almost certainly be something that has to wait until after we get back from our Waterloo 200 jaunt!
Posted by Seb Palmer at 15:10