A gripping and exciting read. 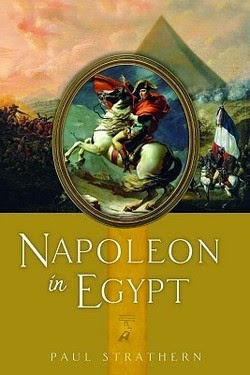 In a rare instance of books living up to dust-jacket hype, Paul Strathern's book is indeed 'remarkably rich and eminently readable.' (This is from my edition, which is a Bantam hardback, as pictured above.) Several other reviewers have already covered a number of key points of interest in this excellent book, so I'll just mention a few things that struck me as particularly intriguing. For one thing, considered in conjunction with his Italian exploits, undertaken just prior to this Egyptian adventure, these episodes of Napoleon's early life might be taken as a premonitory microcosm of his larger career, a fact Strathern himself reflects upon near the books close.

Having taken on the Mamelukes and put them to flight, bringing Egypt more or less to heel, Napoleon had to deal with the aggravated landlords; Egypt was part of the Ottoman Empire at this point. The 'Turks', as they were then known, had been French allies, but they now joined with England, and even their own traditional enemy Russia, to oust the Republican infidels. The consequent French expedition to Syria, to meet this threat, has interesting parallels with that to Russia, inasmuch as Napoleon's and Berthier's much vaunted organisational skills don't seem at their peak. Just as Napoleon's normal modus operandi unravelled in Russia, so in Syria he failed to see every eventuality. This last fact stands in contrast with the myth of Napoleon's omniscience [1], a facet of Napoleon's genius much trumpeted by many writers, including Strathern himself (as on p 19: 'he learned to consider all the options ...', etc.). 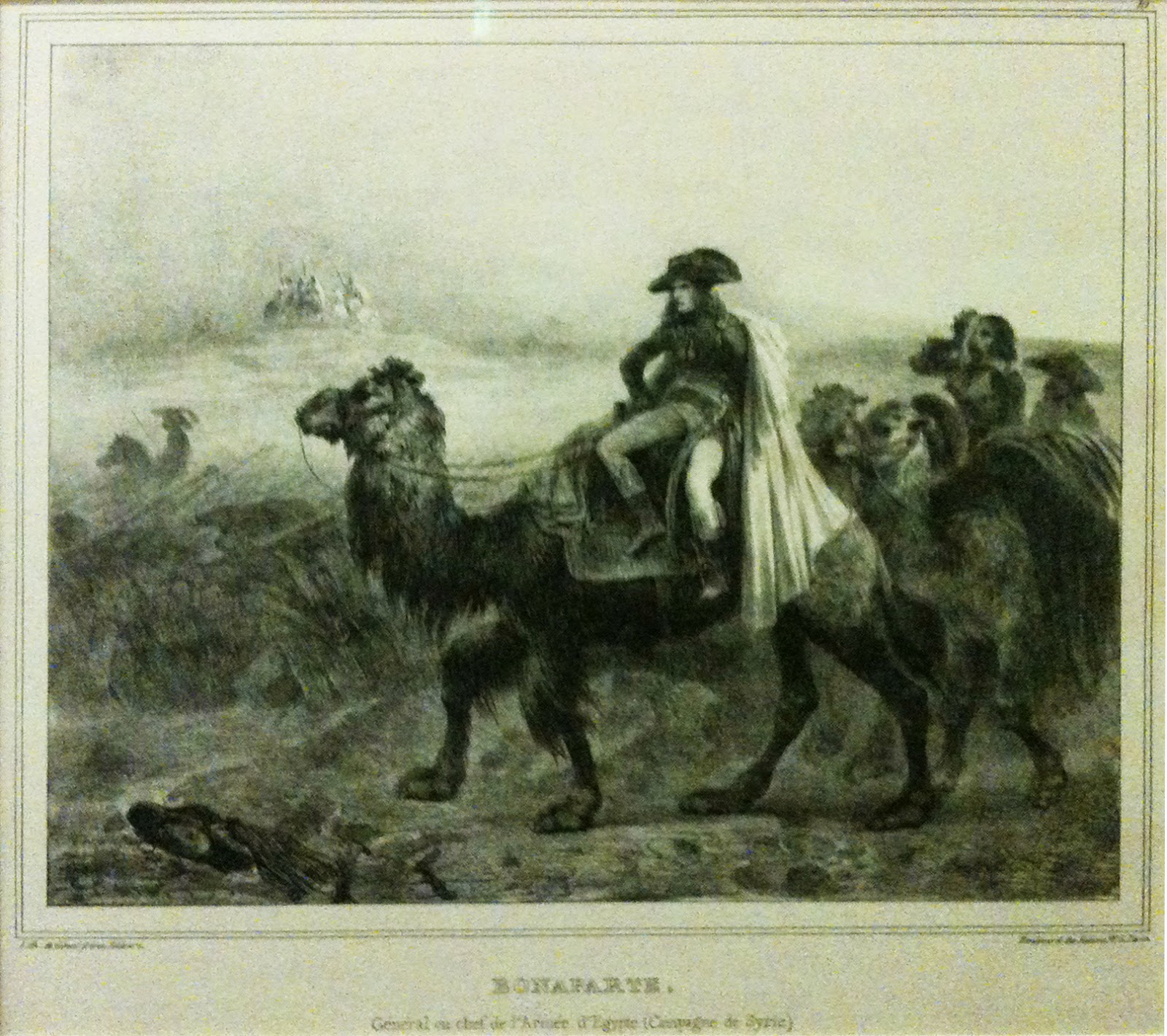 Another image from the Fitzwilliam Museum Napoleonic prints
exhibition, currently on display in Cambridge. This one showing
Bonaparte in Egypt. Apologies for the poor quality of my photo!

However, with an ominous foreboding of what would later happen in Russia, Napoleons's troops, and even more so his horses, were not adequately prepared for conditions in Syria. In what Strathern calls 'a classic military mix up' French forces were finally issued with lightweight clothing, suitable to their initial theatre of operations, just as they embarked on a new campaign, during a change of season and under very different conditions: having sweated it out in the Egyptian delta wearing heavy European cloth, they were destined to endure the cold and wet conditions of winter along the eastern Mediterranean seaboard clad in lightweight summer fabrics!

The parallels with Russia extend beyond mere lack of preparedness in the clothing department, in that the crossing of the Sinai desert, closely followed by the siege of El Arish, found the French running out of supplies. As in Russia, living off the land frequently simply wasn't viable. One anecdote which illustrates this in a way both amusing and horrifying, whilst sounding uncannily like countless 1812 stories, is the mention of a major who, on awaking, discovers his troops have eaten his horse during the night! Everyone was suffering, again just as in Russia, but particularly the luckless equine contingent, whose reward for being long-suffering undernourished beasts of burden would often be to end up as dinner themselves. 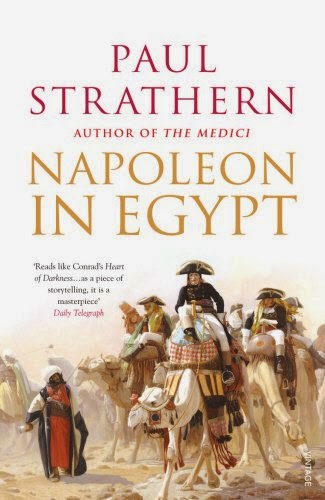 
Having noted all this, overall the expedition had been going reasonably well, the one major exception being Nelson's resounding defeat of the French fleet at the Battle Of The Nile (the one aspect of the campaign English readers are likely to be most familiar with). Despite this, Egypt had been successfully occupied and largely pacified, with Desaix's campaign into Upper Egypt, a model of success, forming the fascinating core of several chapters mid-way though this superb book. Napoleon's foes were regularly and soundly beaten, a serious rebellion in Cairo was successfully contained and put down. Certainly the clash of two very different cultures, namely Enlightenment-influenced post-revolutionary France, and the Mameluke ruled primitive conservatism of Islamic Egypt, looked very tricky to resolve. This mismatch remained at all times, barely below the surface, threatening to undo anything the French might achieve very rapidly, as ultimately proved to be the case. Had the French held on to this part of their empire longer, who knows what the global geopolitical outcomes might have been?

One of the many areas Strathern does an admirable job of covering, an area one might expect the more military buff type writer to perhaps gloss over, was the role of the 'savants'. Napoleon was inordinately proud to have been elected a member of the Institute of France. So much so that this part of his official title preceded his military rank during this period. Not only is this interesting in itself but, via a passing reference to how Napoleon was modelling his exploits on those of one of his heroes, Alexander The Great, we also learn that Ancient Greek 'natural philosophy' was closer to modern science in some respects than is often made out. A fascinating example is the savants collecting flora and fauna as they move through territories that are being occupied, sending samples back (to Cairo in this instance), much as Alexander had done in sending back specimens to Aristotle. Fascinating! 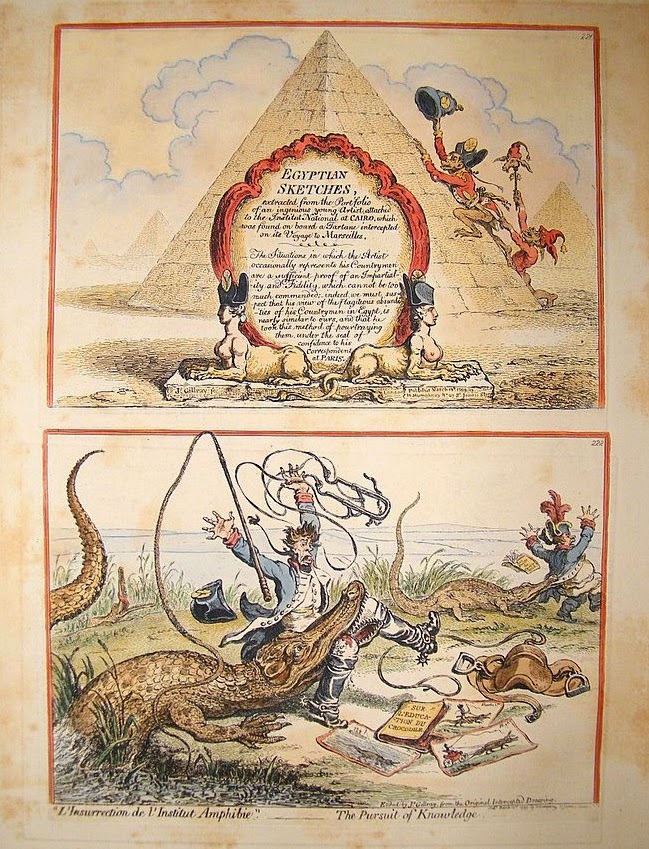 Strathern occasionally speculates on aspects of Napoleon's character, sometimes in what sounds like semi-Freudian pop-psychology terms, but fortunately he doesn't go in for too much of this, and what little there is is couched in purely speculative and gently understated terms. Of all such instances, the most striking is when he refers to Boney's annoyance and frustration during the slow-moving attrition of the Syrian campaign, noting that the setbacks he faced didn't undermine his sense of destiny, which, in Strathern's words, 'was his substitute for self knowledge.'

The massacres perpetrated at Jaffa are horrifying to read about, and went on for about a week, starting with the drunken bloodbath after the initial breach and only ending with three days of systematic butchery, as the remnants of the garrison (who'd holed up in the citadel, and then surrendered to Napoleon's aides, Beauharnais and Crosier) were put to death. In typical dictator fashion Napoleon manages to justify his actions to himself, but many of his compatriots are all too aware that this could not be whitewashed. At the same time the bubonic plague was striking and, in marked contrast to his actions in ordering the massacre, Boney visited his sick troops: 'Is it mere accident that this hazardous and selfless act should have come just a day after he had been responsible for the most cold-blooded atrocity he would ever commit?' [2]

This was a gripping, exciting read. Now that I'm finished I've got a need for more! 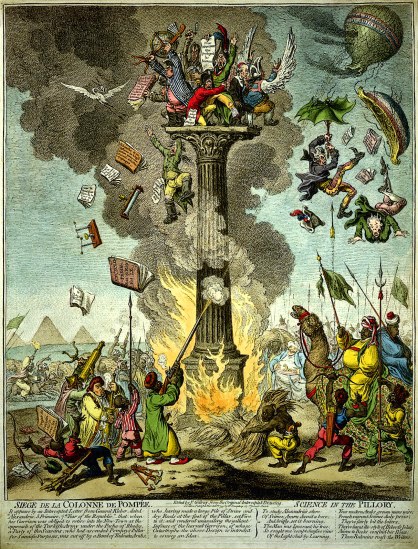 Gillray received detailed instructions from his Tory paymasters
as to the composition and content of this incredible image.

[1] I don't mean to say in using the term myth that these ideas are totally unfounded, merely that in celebrating heroic charisma they are sometimes overstated.

[2] Strathern comments on what he regards as Napoleon's 'erroneous belief in willpower and ... overweening self-belief', hinting that Napoleon felt himself, as a man of destiny, safe from the contagion of plague. True or not, Bonaparte was both brave and foolhardy to take such a risk.