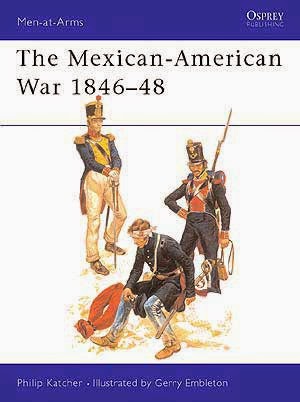 NB: In order not to infringe copyright, this review is illustrated with, excepting the cover image, pictures that are not from the Osprey book under review! [1]

I've had a soft spot for the Osprey Men-at-Arms titles since childhood, when I first bought a couple of the titles. When I sold off my childhood wargaming armies, I kept the Osprey books; there were just the two: numbers 55 and 64, Dragoons & Lancers, and Cuirassiers & Carabiniers, respectively, both by the exotically consmopolitan sounding team of Emir Bukhari and Angus McBride.

The series as a whole had a certain allure for me, as they combinend the fascination I've always had for military couture, and the accosciated tradition of uniform illustration, with a small and collectible format. I had loved, when even younger still, collecting Tintin and Asterix. These more martial titles had a similar appeal to my tendency to serial acquisitiveness. 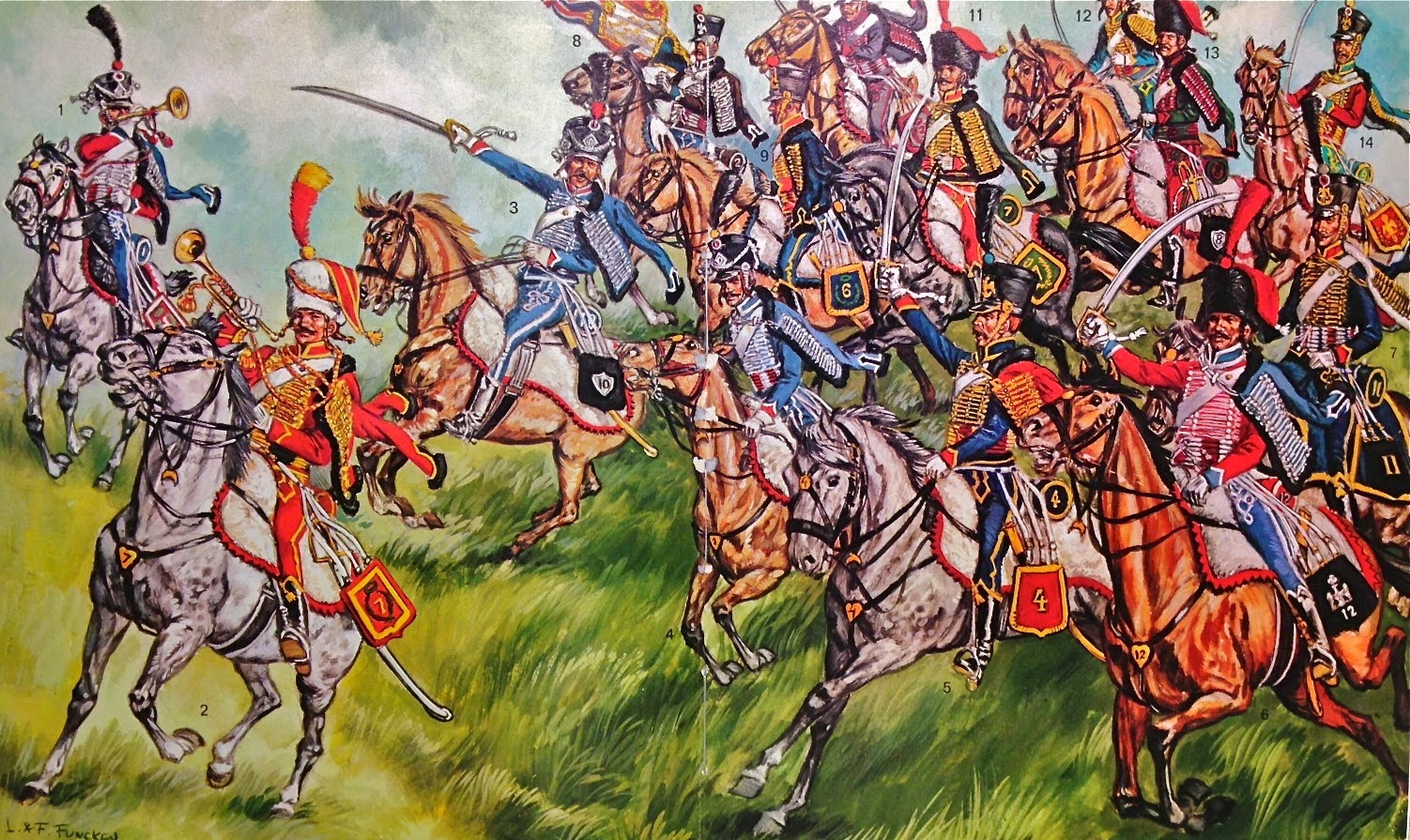 A beautiful plate from volume 1 of Liliane & Fred Funcken's Arms & Uniforms of the Napoleonic Wars, showing a motley and colourful collection of French Hussars.

However, it wasn't long before I also twigged that they were a potentially very costly way to gather the info I needed. Ever since that realisation, I've been very chary of buying them. Preferring instead to spend larger sums on more compressive works, like the two-volume L&F Funcken Arms & Uniforms titles (see above pic.), or the collected Rousselot plates, as a more cost-effective means to research 1st Empire uniformology.

Having returned to my childhood interests in military history and culture, in tandem with model making and wargaming - or at least figure collecting - I'm beginning to tentatively widen my interests a little, beyond the two former enclaves of Napoleonic and WWII stuff I used to concentrate on, and have returned to (as familiar first ports of call).

The American Civil War has always been another background interest of mine, but one that had lain largely unexplored, apart from a few magazine articles (for more on my obsession with certain ACW battlefield maps, see my previous posts [links to be added!]), and a couple of packs of Airfix 20mm plastic figures, one each of Confederate and Union! 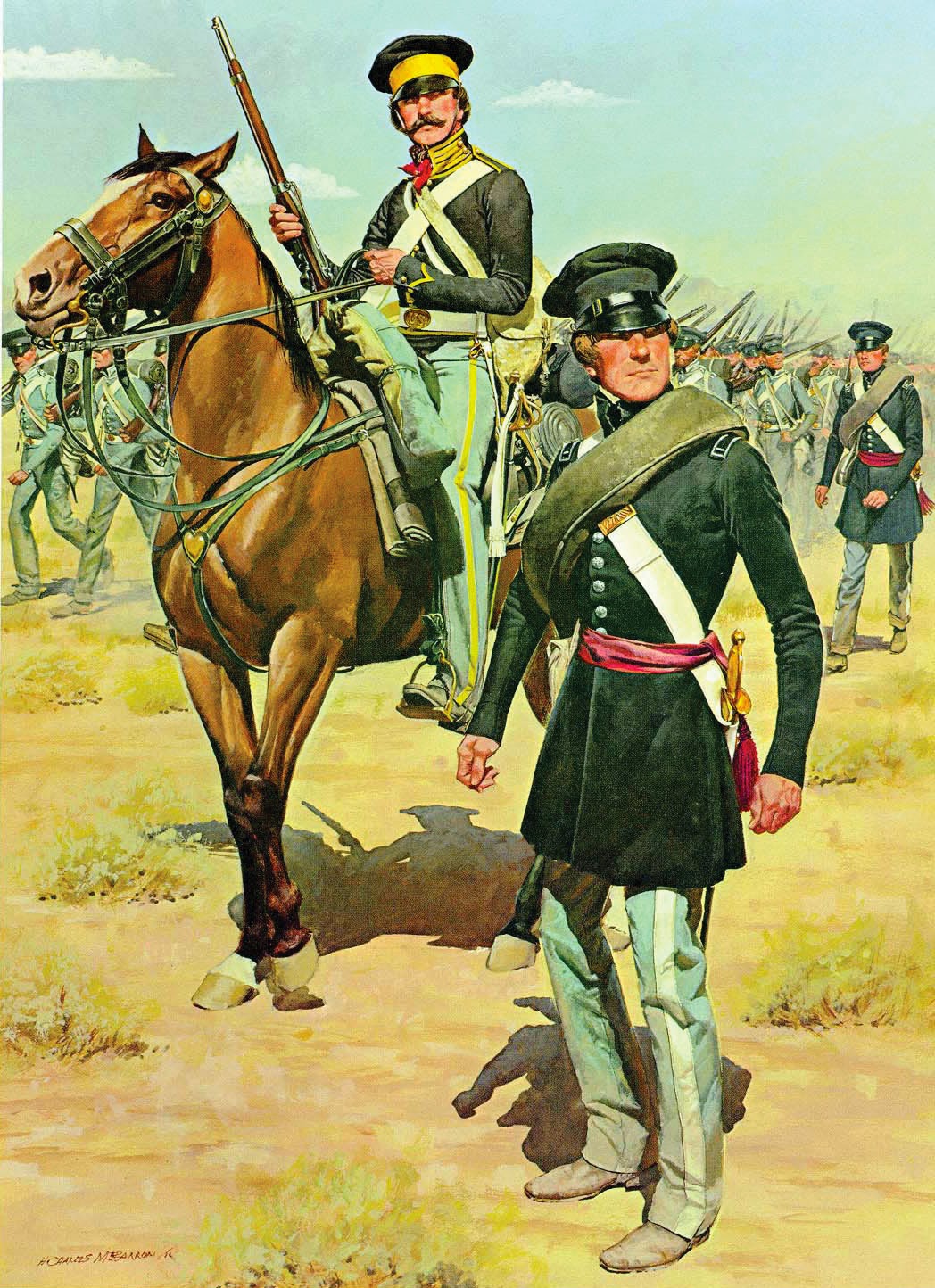 A dragoon and a 1st lieutenant of infantry, wearing uniforms typical of Regular Army soldiers during the Mexican War. (Source: From H. Charles McBarron’s The American Soldier, 1847, Army Art Collection)

Looking into the ACW more deeply - I gradually acquired several books, and eventually bought and watched Ken Burns' epic and fantastic PBS series - alerted me to the Mexican American wars. Occasional references to this campaign in various places, especially the odd pic. or two, intrigued me, as the US troops were already starting to look more like they would in the ACW, whilst the Mexicans still clearly looked back to the 1st Empire of France, sartorially speaking.

This slim volume concentrates on uniform info, with only very brief summaries regarding the backgrounds of the antagonists, and, at the end of the book, a very slim synopsis of the military actions and the troops involved. I harbour a very long-standing desire, only explored in the most desultory and tentative manner as a kid many moons ago, to start sculpting and casting my own figures, and I have, more recently, entertained thoughts of starting with this conflict. Indeed, that's why I bought this book. 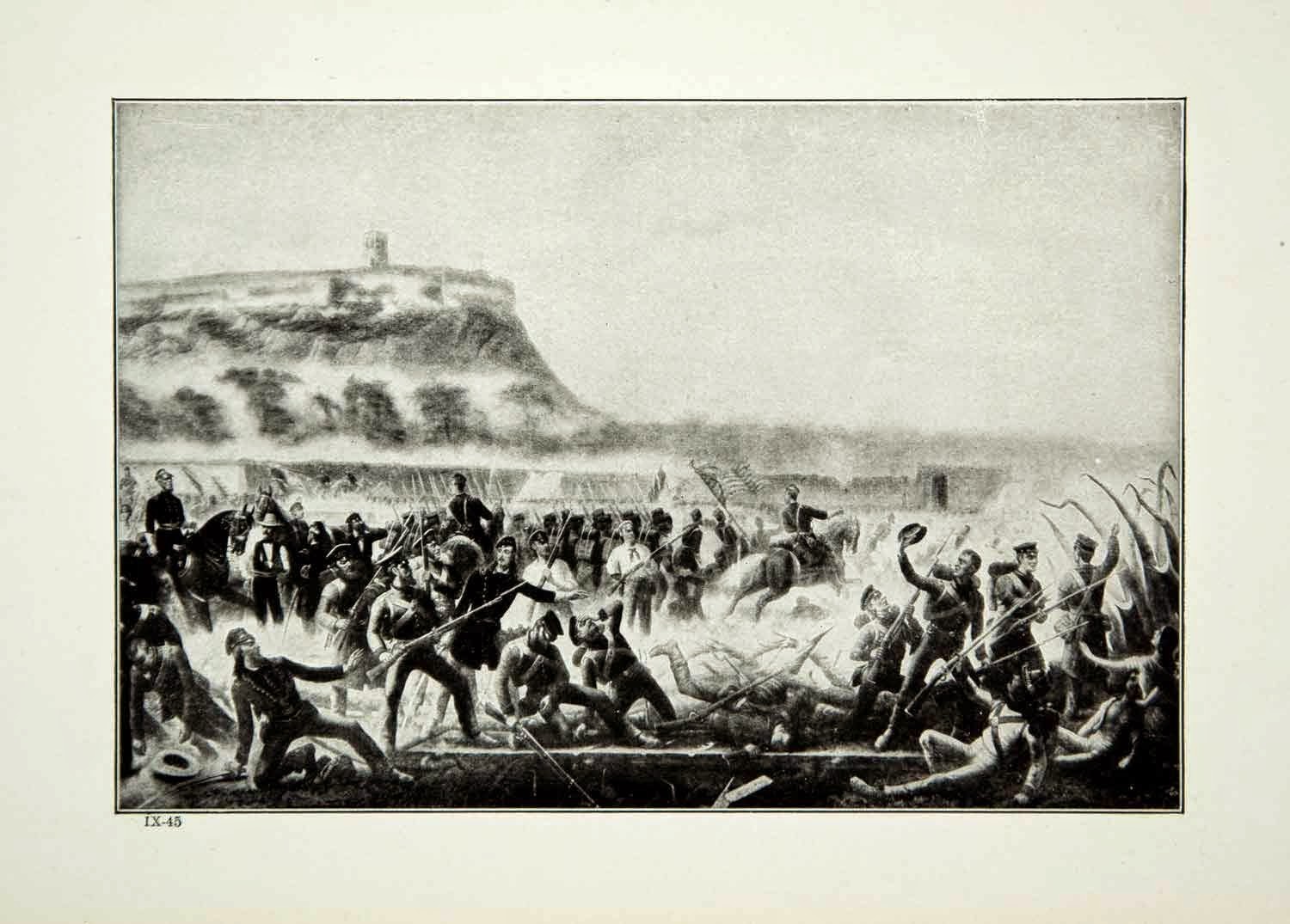 A number of black and white images by the artist James Walker are used in this book, although not this one (if I recall aright?), of The Battle of Chapultepec.
It's certainly a good starting place, on the subject of uniforms of the Mexican American War, but it leaves one wanting much more, and I suspect I'll use this book, and the notes it gives on sources, to find further and more unit specific ref. Gerry Embleton's artworks are very good, although not quite as much to my tastes as the work of my favourite Osprey illustrator, Angus McBride.

I'm no expert even on my chief areas of interest, such as Napoleonics, let alone in an area such as this, which is completely new to me, so I can't really judge the quality of the information in terms of accuracy, but the book certainly seems very usefully informative for a newbie like me. I do think there should be a glossary of terms as a standard feature in all such books, and sometimes Philip Katcher's writing style is less than crystalline in terms of clarity. 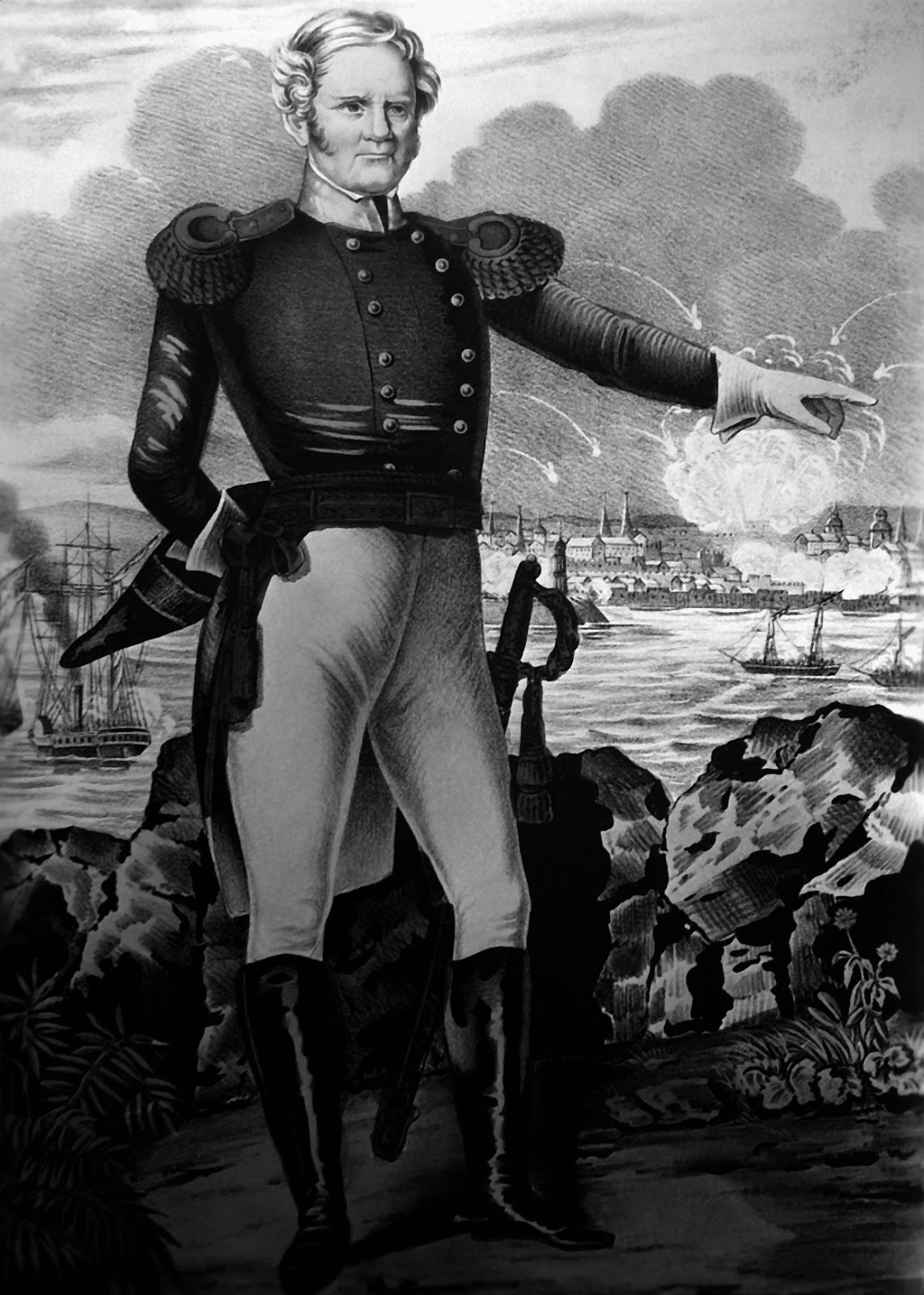 Gen. Winfield Scott, at the battle of Veracruz (source: Wikipedia
commons). This is clearly before he grew to fat to sit a horse!

In addition to the standard Men-at-Arms format whereby you get eight pages of full-colour 'plates' in the centre of the book, there are numerous black and white pictures, many by an artist called James A Walker, whose work I will definitely investigate further online. There are also some interesting photos of actual weapons and uniforms, and a few of the leading figures, like US General Winfield Scott.

I got my brand new copy relatively cheap via Amazon UK's 'market-place', and think it a worthwhile addition to my militaria library. But I wouldn't say it's amazing value for money, as it's such a slight affair. I read it all the way through, sitting in a cafe one afternoon, in about 2-3 hours! So textually and visually, as informative as it is, it's really just a convenient introduction to what is undoubtedly, despite the short duration of the conflict at just two years, a much bigger subject.

[1] I'm thinking I might well contact Osprey to ask if they'll give me permission to use a colour plate or two to better illustrate this post.
Posted by Seb Palmer at 16:11