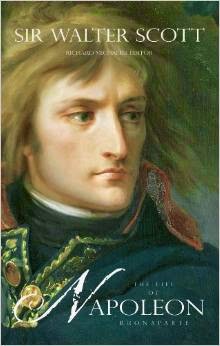 Sir Walter Scott worked by day at 'The Law', as they used to say. But he is of course best remembered as the author of such works as Ivanhoe and Rob Roy. A Scot, a Tory, and a poet and author, he had a taste for misty-eyed romanticism and nationalism. Some of these qualities he shared with, and some set him apart from, the subject of this work, that Ur-product of the French Revolution, himself a misty-eyed Romantic (besotted by the fake Ossian myths) [1], and yet restorer of a dynastic monarchy [2], Napoleon.

Many have said that there was a kind of hubris or megalomania inherent in Napoleon and his enterprises, and that he therefore carried with him the seeds of his own destruction. Well, whatever the truth or otherwise of such ideas may be, it is intriguing to note how often an almost Napoleonic grandeur in the conception of works about this man have lead to an almost parallel phenomenon.

From Thomas Hardy's unproduceable play about him, to Abel Gance's 1927 film, [3] all the way through the to Kubrick's unrealised movie, the life of the man known in the British Isles as 'The Ogre' and 'The Corsican Upstart' has often frustrated and eluded capture by the creative minds and arts. To his great credit, Sir Walter Scott really got stuck in, and he pulled it off, albeit by temporarily swapping his fictional author hat for that of an historian. 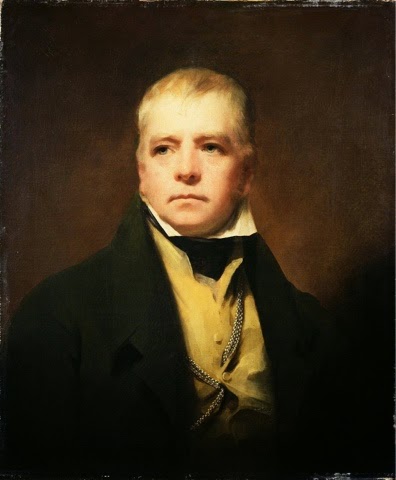 Oor Wally.
For all that Scott's occasionally stodgy prose style has dated somewhat, this a very enjoyable and highly readable rendering of one of history's most written about lives. Published simultaneously in Britain, France, Germany, Italy and Spain, Scott's book rapidly sold out several editions, earning Scott a fortune. Quite why, after its huge initial success, this particular account has been out of print for so long is, frankly, quite perplexing. Okay, most readers might well find the original nine volumes rather too much, but there have always been both full and abridged versions of Gibbons' Decline & Fall for readers to choose between. Granted, Scott's historical prose doesn't quite have the resonance (or wit) of Gibbons, but it is very good, so why was it not the same with this book?

In this truncated single-volume edition there remain, setting aside issues of opinion and interpretation, some factual errors. But how much history can claim to be entirely free of error? Despite these occasional errors, and whether or not you share Scott's opinions, I think this is a very good contribution to a crowded field. It's also of great interest because Scott was more or less contemporary with Bonaparte, so this is a very full account from a great writer - and this is Scott's only purely historical work - close to the time of the events (Goethe, another contemporary, gives Scott's account fulsome praise on the dust jacket).

Even in this highly abridged form Scott's history is very good in that it covers such areas as Napoleon's civil and domestic activities, often treated as extraneous by authors more interested in the story of his military glory. This extensive scope, even in this cut down form, also brought to light interesting information new to me regarding the two periods of Boney's exile, on Elba and St. Helena.

Apparently a combination of professional jealousy from academic historians - who sometimes seek to denigrate the efforts of 'amateurs', then as now - and the issue of how partisan an author he may be, may lie behind the descent into obscurity that befell Scott's account. It seems to me, however, from what's included here, that Scott always seeks to be fair to Bonaparte, and in most instances judges him favourably. But it is also quite clear, and becomes ever more so as the book continues, and Boney's fortunes wane, along with those of France and much of Europe, that Scott is no uncritical Boneyphile. But, frankly, most English writers I've read seem distinctly and often far more acidly Boneyphobic. And in fact, in comparison to some, most of Scott's critiques seem both entirely moderate and quite reasonable.

In the end neither Scott's skills - nor any supposed lack of them - as a historian, nor his views, seem sufficient to explain the books 150 year disappearance. Richard Michaelis, who compiled this edited single-volume version addresses all of these issues in his very interesting introduction. So, is it merely that we've had to wait for someone like Michaelis to create an abridgement? Having glanced at an online version of an unabridged section of the text, I'd venture to say this is probably the major cause of the books disappearance.

Whatever the reasons are, I'm massively grateful to Michaelis and publishers Gibson Square, for making this available again. In this truncated form I found the work to be a very compelling read, and the many but small chapters (always a good arrangement) just flew by. Perhaps at some point the full nine-volume version will come back on to the market? If it does, I reckon I'd be amongst those game enough to read it. [4]

Unlike many books on this subject - perhaps including Scott's own original edition? - this has no maps or other illustrations (aside from Gros' painting, of the young Bonaparte on the bridge at Arcole, on the dust-jacket cover) [5], which is a pity. Maps are really essential in books of this sort. Still, if you've either learned the geography of Boney's campaigns or have at hand something like Esposito and Elting's superb Atlas of the Napoleonic Wars, you'll be okay.

As a voracious reader of Napoleonic history this has made a very welcome addition to my ever-growing Napoleonic library, and is, I think, a well-deserved return to the fold for a lost sheep from the flock. All in all, excellent. I would unhesitatingly recommend this.

[1] Ironically the myths of Ossian that Napoleon so loved were fabricated by one of Scott's fellow countrymen, James Macpherson.

[2] Napoleon was obsessed, as were practically all the elites of Europe at the time, with classical allusions. Much of what he did, everything from making himself a consul to an emperor, or even sticking his hand in his weskit (like a Roman with his hand in his toga), was done in emulation of Classical models. Even the choice of Emperor rather than king was in keeping with this, and, rather like the Roman emperors themselves, involved a spot of semantic chicanery, in that Roman emperors were supposed to rule by consent of the Senate.
But this little bit of politicking was, of course, essential toNapoleon's  programme of effective monarchy by the back door. Indeed, it's very clear from his own writings, and those of men like military theoretician Jomini, that Napoleon was upset and angered that the legitimists (more semantic trickery: Czar [name]'s family had not long usurped the Russian a throne, and the Hanoverian kings of England showed how the bloodline over merit idea was well overdue a revolutionary shake-up) would refuse to countenance him as a monarch and restorer of order.

[3] Gance used up the entire budget, for a series of films intended to portray Napoleon's complete life story, on the first episode. So rather than Napoleon's whole life we only get up the the Italian campaign against Austria.

[5] Which painting, by a strange coincidence, also graces the cover of the previous Napoleonic book I had just read (and reviewed), Boycott-Brown's excellent Road to Rivoli!
Posted by Seb Palmer at 23:34