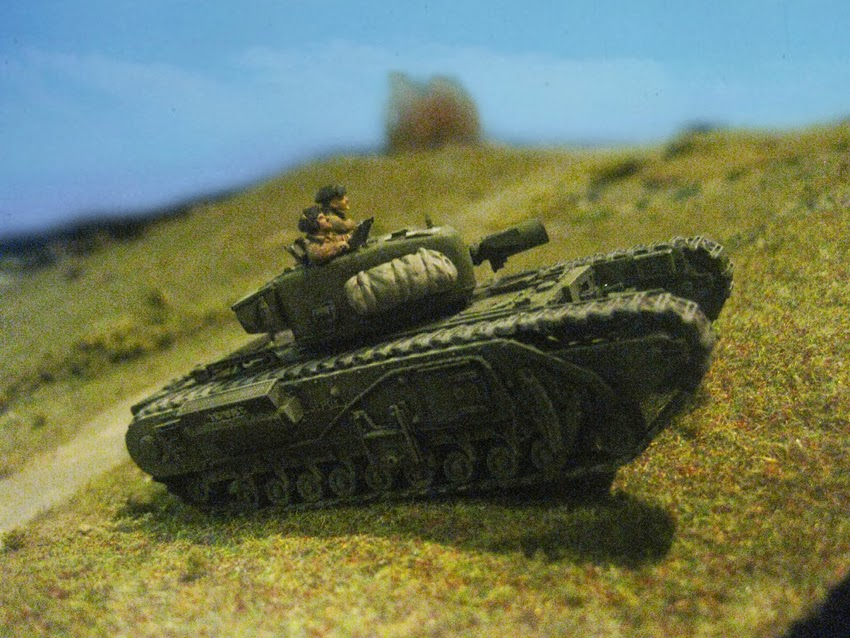 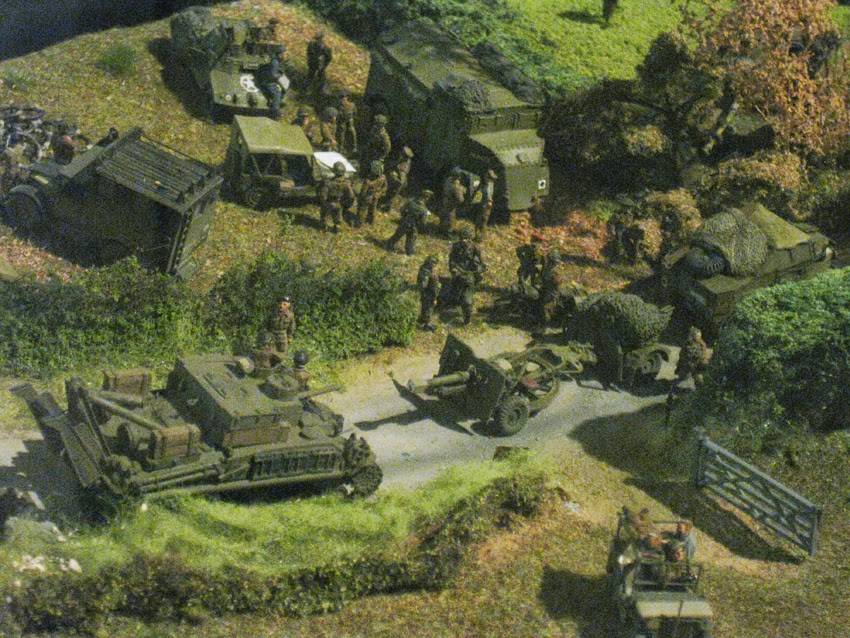 Mobile, HQ: officers gather round a map on the bonnet of a jeep, as
tanks, armoured cars and artillery head west, for the Front and Berlin. 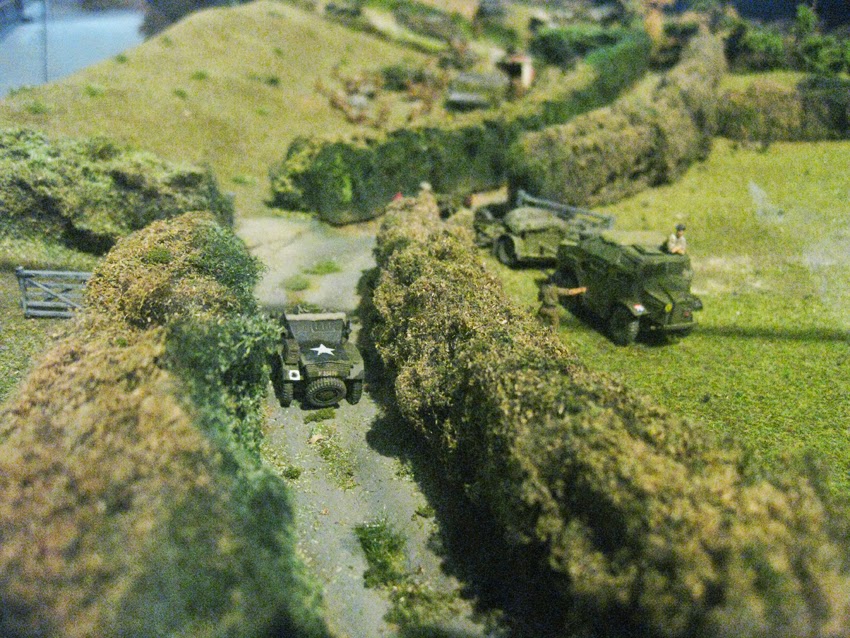 I think this is what they called the bocage. 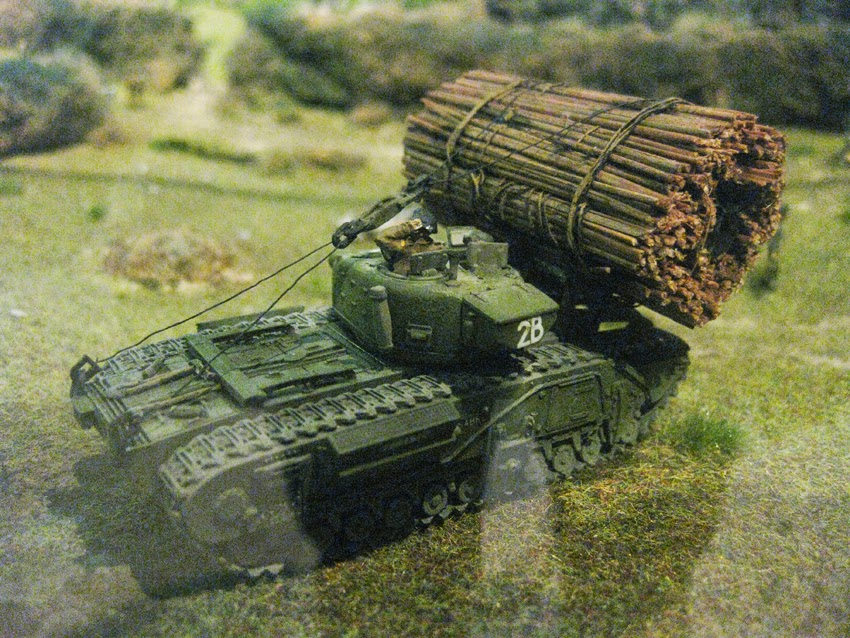 I love this tank model. I think it's a Churchill AVRE with a fascine [1] bundle. It's a pity about the reflections from the glass case housing the model. 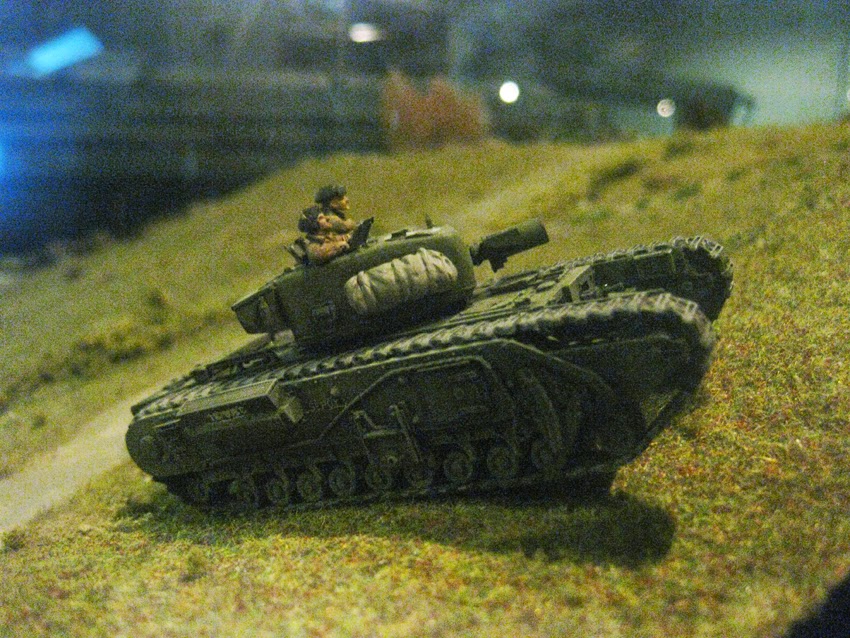 I'm no expert on Allied tanks. Is this a Churchill AVRE with Petard mortar?

I doctored the above pic, for the banner pic of this post (see very top of post), substituting some (genuine) Normandy 1944 sky for the innards of the Duxford IWM Land warfare hall. Does it work? 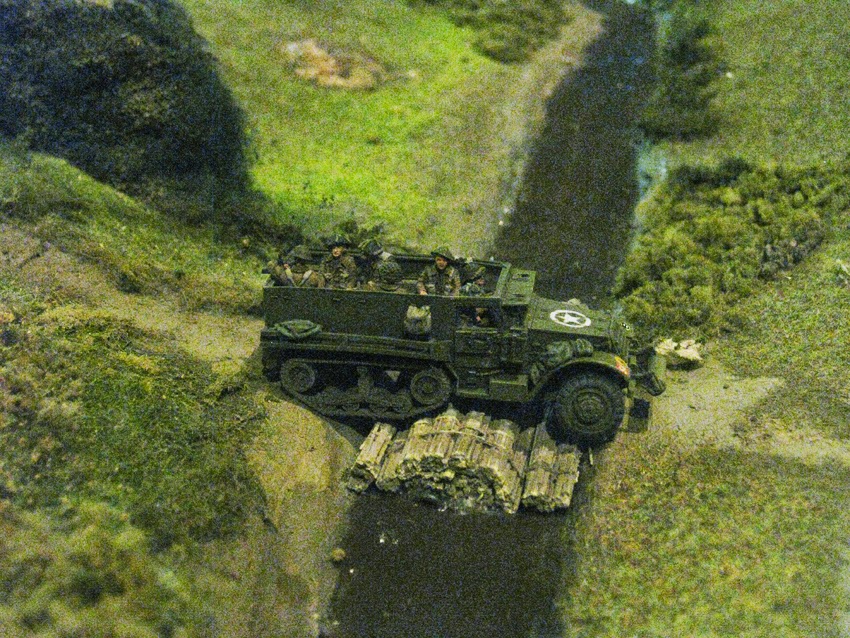 Like I already said... I'm not so au fait with Allied materiél of WWII: is this
a British vehicle, or a bit of lend-lease from FDR and Uncle Sam?


But... back in October 2012 my wife and I visited Duxford Imperial War Museum. I took tons of pics of (almost) everything that caught my eye. But one of the things I was most keen to photograph was a Normandy 1944 diorama, built by members of the London branch of the MAFVA (Miniature Armoured Fighting Vehicles Association), using AB figures, many sculpted especially for the diorama, by one of my figure-sculpting heroes, Anthony Barton. 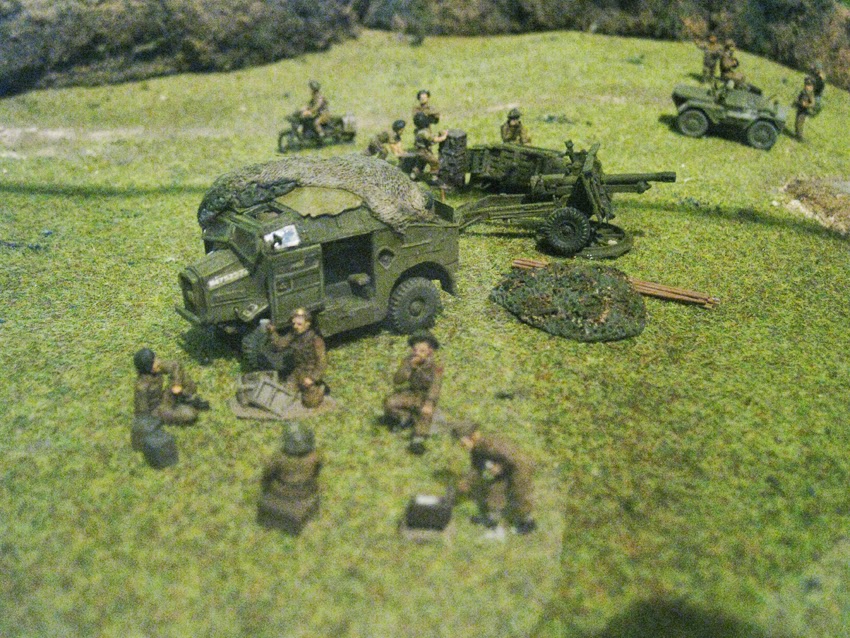 I believe this is a Morris C8 Quad and 25 pdr artillery
team. Stopping for a well-earned lunch break. 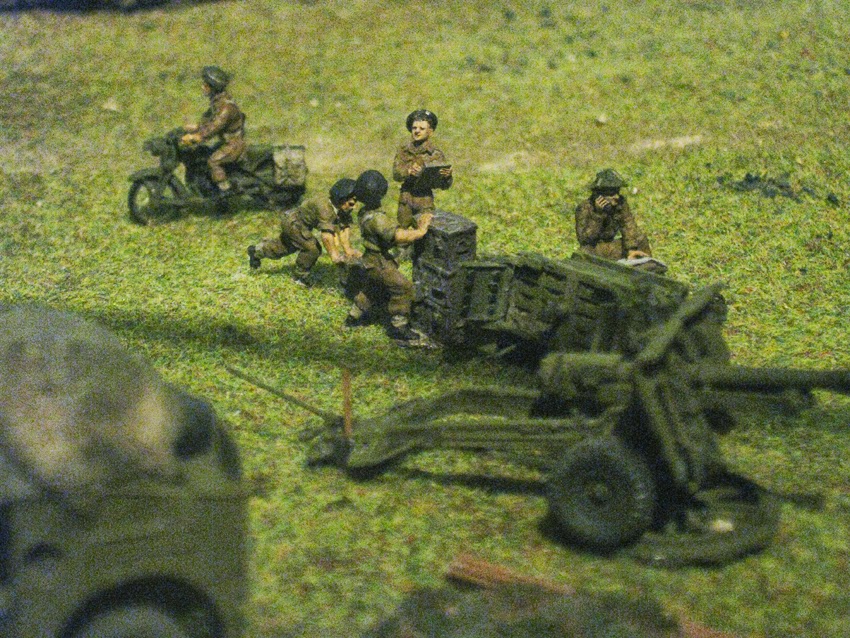 One reason I haven't posted this until now was that I've been meaning to contact Duxford and see if I can arrange a visit to take some much better pictures. My pics were taken with a selection of devices, none of which (our digital camera, a Canon IXUS something-or-other, and my iPad, chiefly) are that good. I also took the pics of the model as it is, under glass and poorly lit. 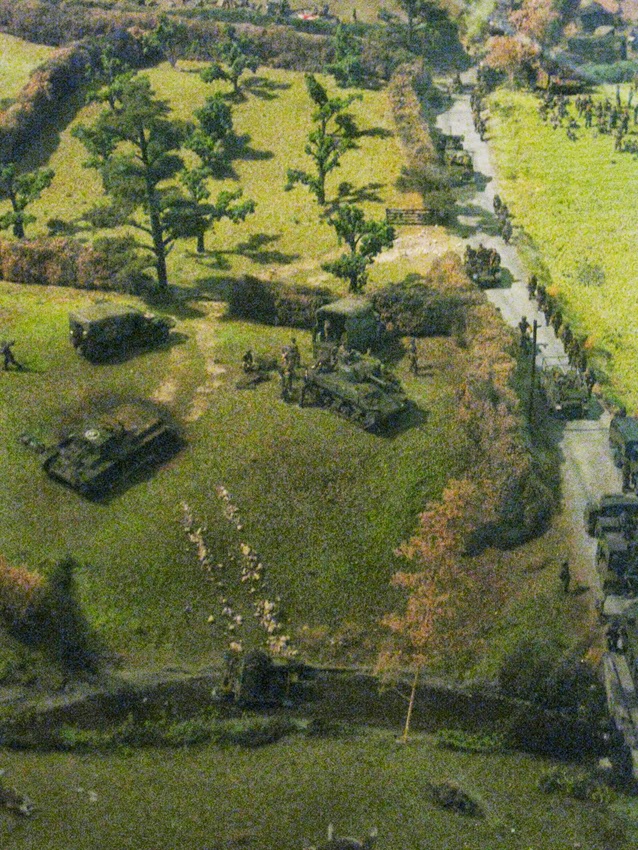 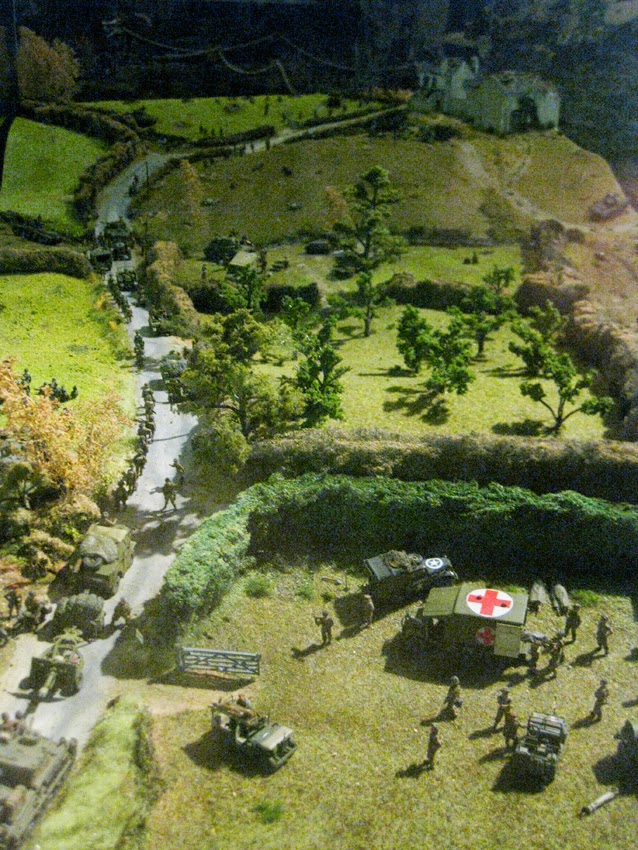 Looking west, towards the ruined building on the high ground. A watercolour sketch, by Dan Taylor and Malcom Mayes,
used in preparing the layout of diorama. [2]


But when I started researching the model, I discovered this very interesting article:

... which tells a lot about the building of this excellent diorama. And the pictures of the finished model in that article, clearly taken using flash are (no offence to the photographer), even worse than mine! So I thought what the heck, I'll post and be damned. Though I have to confess, I do still harbour a deep desire to go back and get some much better pics. This fab diorama definitely deserves better! The pictures directly above and below this section of text are from the Military Modelling website, and are offer a wonderful glimpse into how the model was designed and executed. 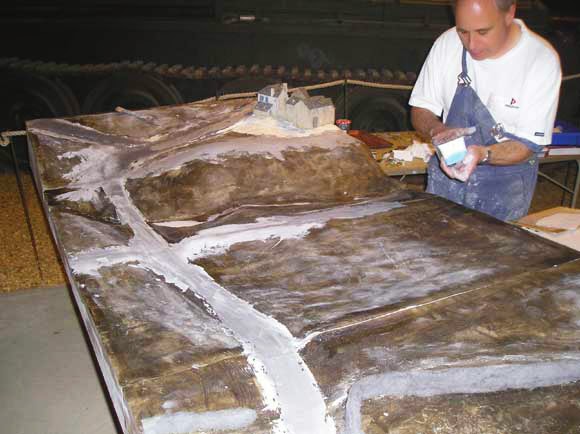 MAFVA member Bruce Harron
works on the terrain, in situ! [2]

Thanks to the Military Modelling article I learned that the scenario depicts an imaginary scene from the Normandy campaign, set in 'a period of post D-Day, but just before Operation Goodwood, the theme being 'Components of an Army'. In this case for 'components' read vehicles.' It's also fascinating to learn about the planning and time-frame involved. I've always loved dioramas, and long harboured the desire of building one. But the closest I've ever got, so far at any rate, was owning an Esci diorama kit (never finished) and the Airfix Hougoumont set, as a kid!

This project was conceptualised in 2002, and commissioned with a brief to be finished by 2004, for the 60th anniversary of the Normandy campaign. Given the general eastward thrust of the Allied movements against the Germans I'd assumed that this would also be, excuse the inevitable pun, the axis of the action on this model. But it turns out it's actually a north/south alignment, shown lengthwise. If you like the pics here, you really must read the Military Modelling article, which is highly enlightening. 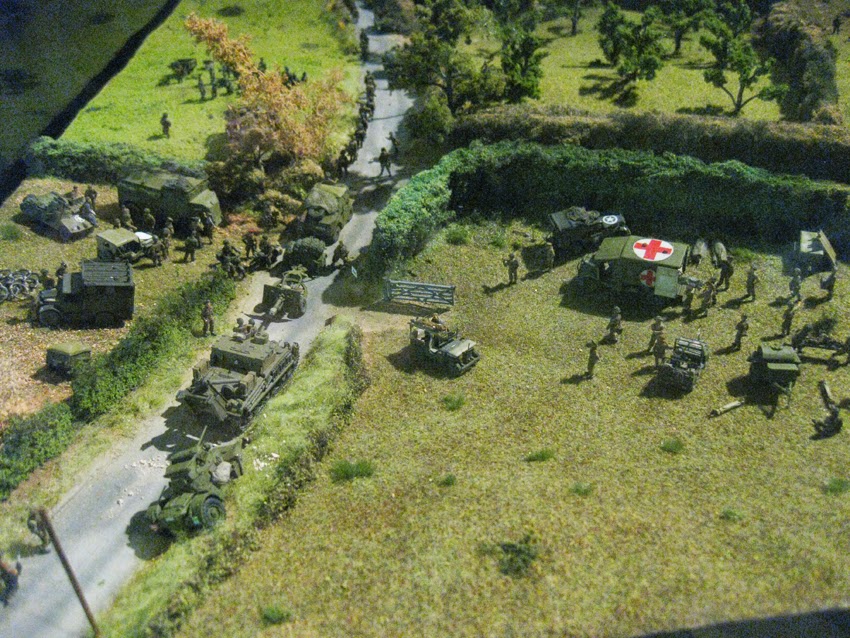 The hub of the action: what a great diorama! So much
going on. And the real feel of a campaign underway. 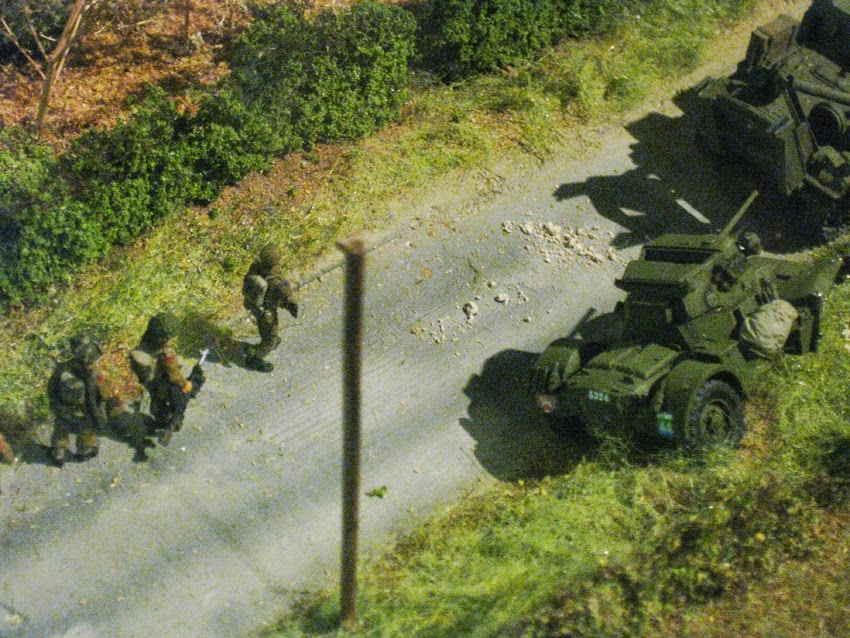 The foot soldiers slog slowly past vehicles that are
starting to pile up in a picturesque bocage traffic jam. 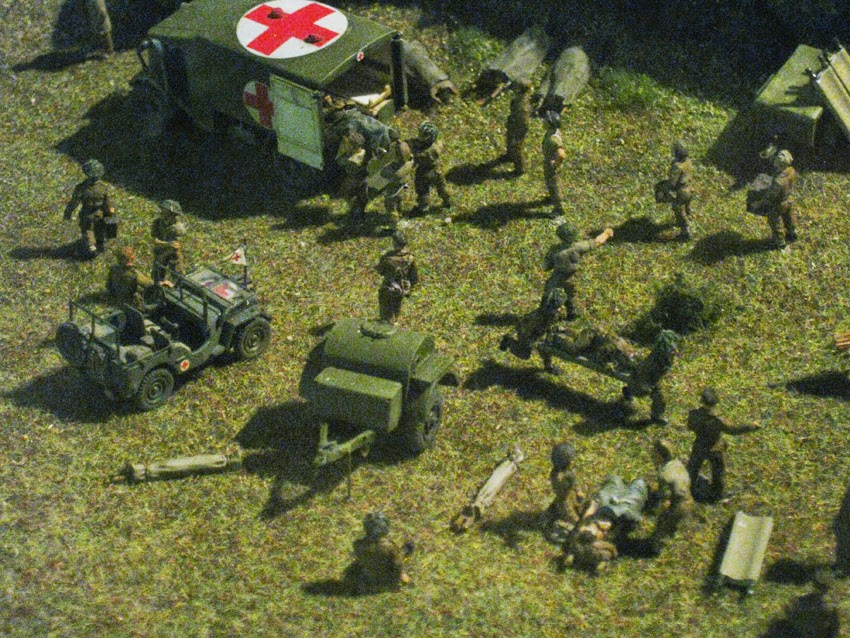 It ain't all fun and games. Here we get a
glimpse of the cost of combat.

Since returning to model-making I've begun to go back to those youthful dreams of occasionally doing it as a possible source of income. Idle speculation, perhaps? Well, it looks and sounds like a dream job to me, although I expect for most who do it supplements other and better more reliable incomes. Still, I smiled when I read this, in John Rulton's article: 'With a need to achieve a realistic view a short holiday in Normandy proved beneficial.' [3]

Due to the nature of the commission, which was designed in part to contextualise some of the vehicles that the Duxford IWM collection has in the Land Warfare Hall, within a scene of British troops behind the front line, the Germans aren't so well represented on this diorama (whilst they are in the collection of real vehicles). What little German content there is is limited to some abandoned materiél and a few hapless prisoners, all that remains of the once triumphant Whermacht in this part of northern France. 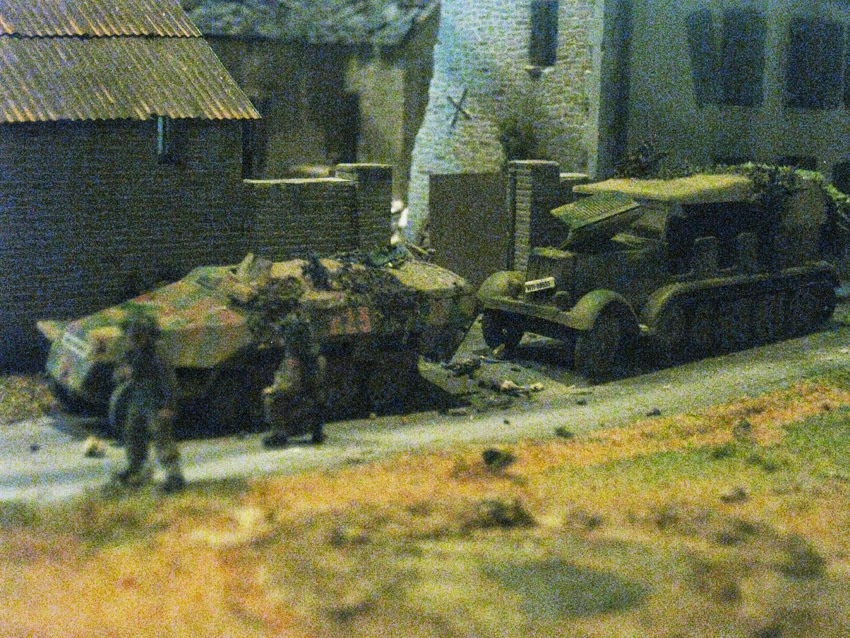 Not so much 'Achtung, Panzer!' as 'Kaput, Sonderkraftfahrzeug!' 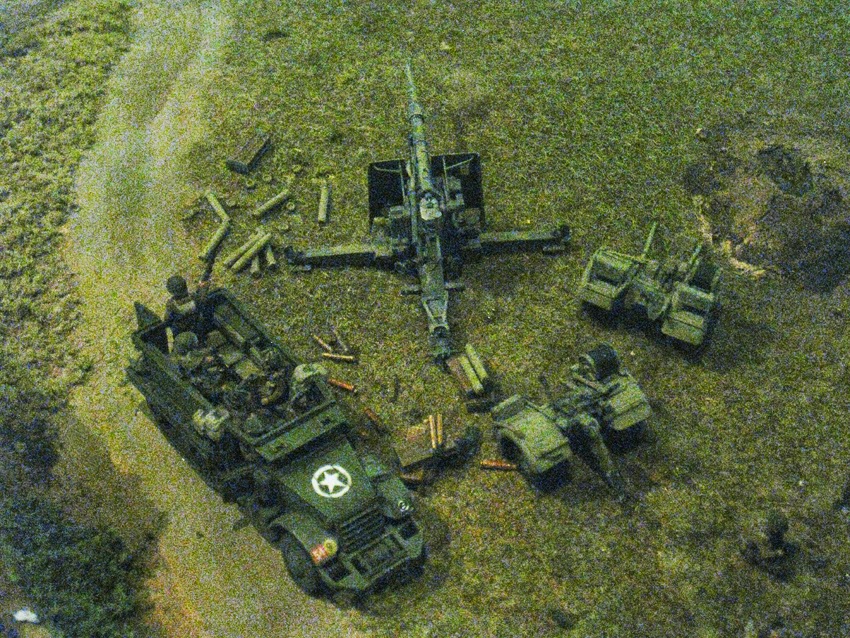 An abandoned 88mm Flak gun, with the bogies detached,
and a nice mess of empty shell cases lying strewn around. 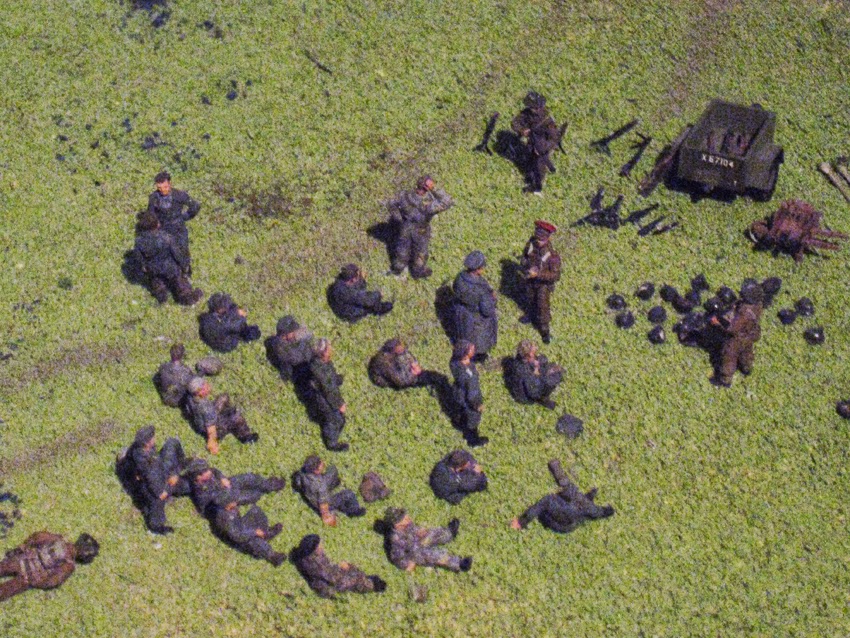 The 'master race' subjugated. The indignity
of it: even my pic of them is crap!


It's fascinating to read the scenario that's envisaged by the team that built this superb model, and the various processes involved in realising it. I discovered that most of the vehicles were made using commercially available kits, almost all of which were souped up considerably. But there were also some scratch built elements, from the beautiful farmhouse, by Dan Taylor, to a Fremch farmers cart, and even some of the vehicles; for example John Rulton did the Morris C8 Quads, which were then cast in resin by Milicast.

I didn't know this initially, as I thought all the figures were AB, but the MM article says there are also a good number by Milicast. There are about 400 figures on the diorama in total. I haven't counted the number or listed the types of vehicles. But I think I might try and do so on my next visit! The model itself is 8 feet by 4 feet, and was made in four 4' x 2' modules. When time allows I'd like to fill in a bit more detail about the model and the scene it depicts. But for now I hope you might enjoy the pics. 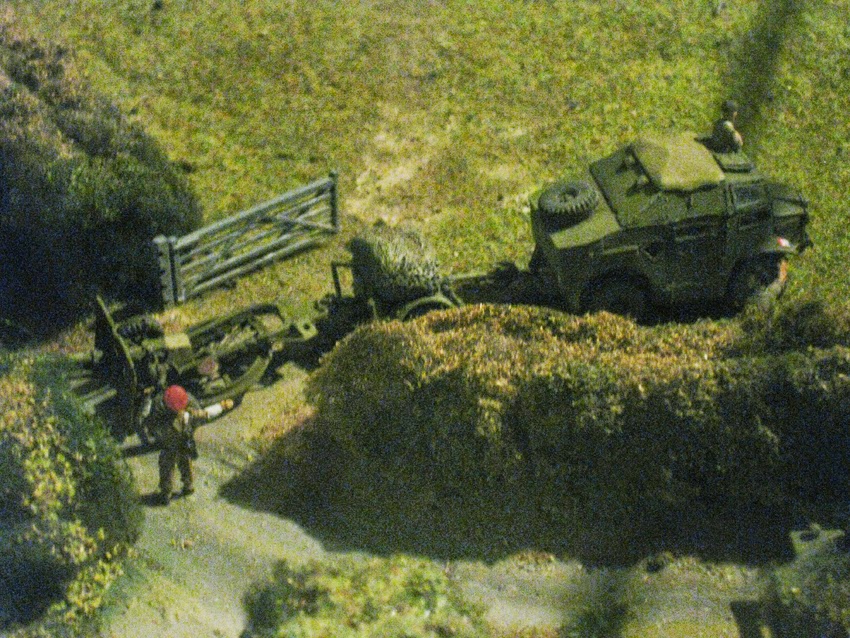 An MP directs another artillery team into a field. 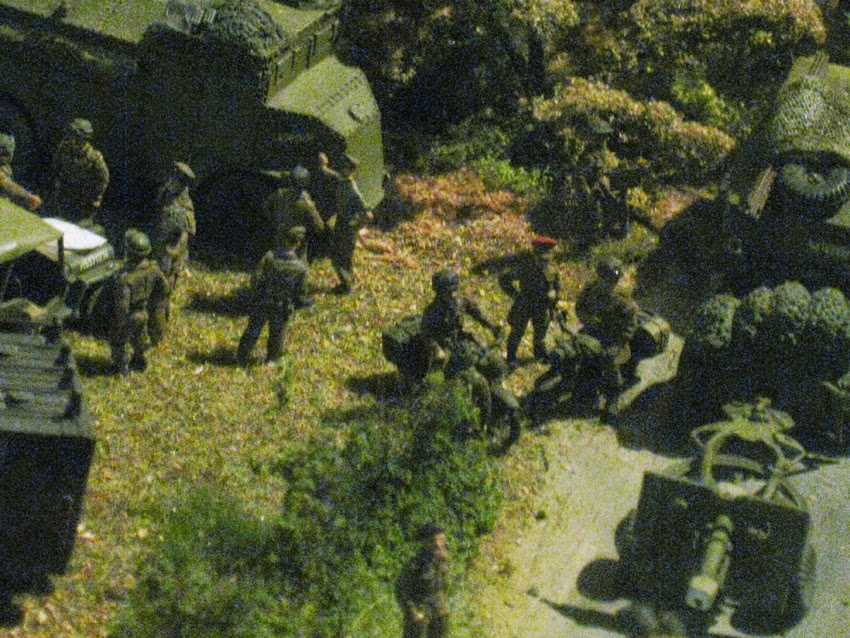 A close up of the beautiful figures in the officers area,
a couple of dispatch riders chat to an MP. 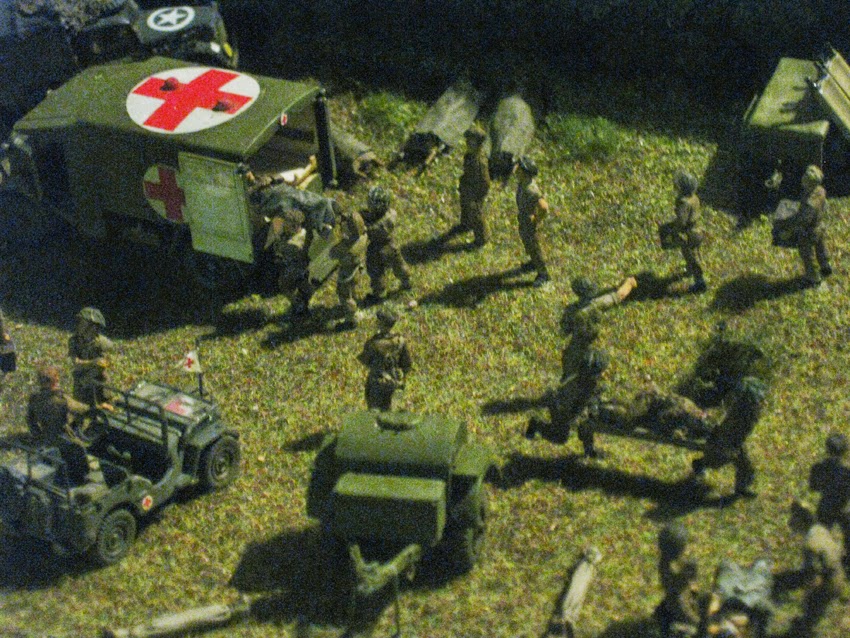 Loading the ambulance. Are those the dead on
stretchers at rear, respectfully covered? 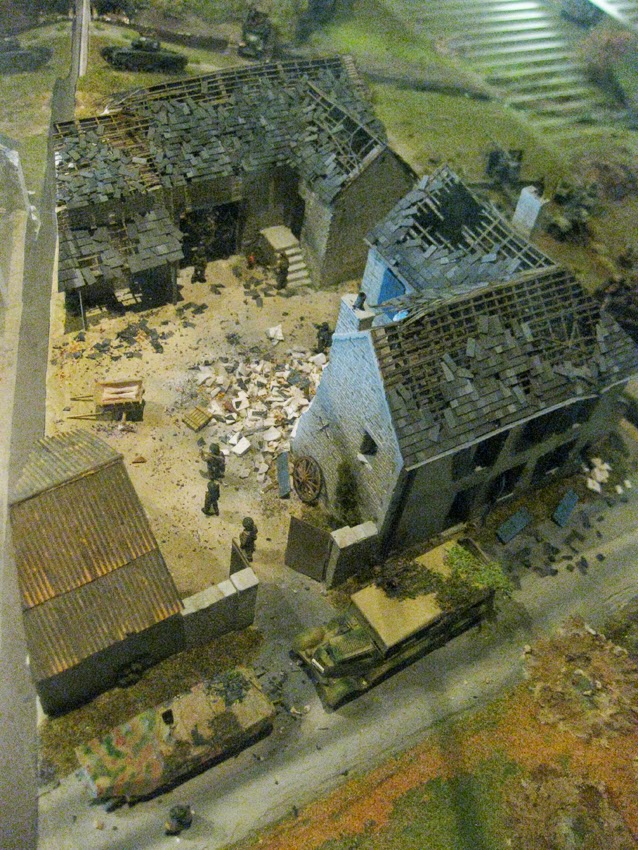 
[1] It's from this same Latin term for 'bundle of sticks' that we also ultimately derive the word fascist.

[2] Thanks to Robin Buckland and Military Modelling for permission to use these pics (and one or two helpful pieces of information about the content of some of them as well!).